Welcome, you clue-singing parrots, you grave-digging dogs, to the sixth season of Pretty Little Liars, the show that dares to ask the question: What happens when every blonde-haired girl in Pennsylvania is forced to wear a yellow tank top and act out The Hunger Games in Spencer Hastings’ backyard one never-ending Labor Day night? Ultimately, honestly, the answer is: lesbianism. Lesbianism is what happens. On a global scale. But in the space between the scissoring: clowns, masks, vampires, witches, puppets, fake cousins, fake sons, snakes, ice cream factories, empanadas, and more classic noir callbacks than you can shake a mannequin leg at.

I didn’t see the season six premiere because I was at A-Camp, and I missed you all desperately! I am happy to be back for real-time #BooRadleyVanCullen-ing starting this very night! This recap will be shorter than usual because I’ve still got a lot to catch up on from doing the queer glamping in the woods for a whole week, and I want to start rolling out my PLL recaps on time after tonight’s episode.

Inside, there is another blonde-haired girl in a yellow tank top, hiding away in a dark, cement hallway, tallying the days she’s been trapped here. I could a billion chalk marks. She might be Bethany Young, or she might be Sarah Harvey, or she might be Cece Drake, or she might be Alison DiLaurentis, or she might be the grown-up version of one of those twins that terrorized Ashley Marin that one Halloween, or it might just be Cousin Nate in a wig and a mask. Who’s to say? 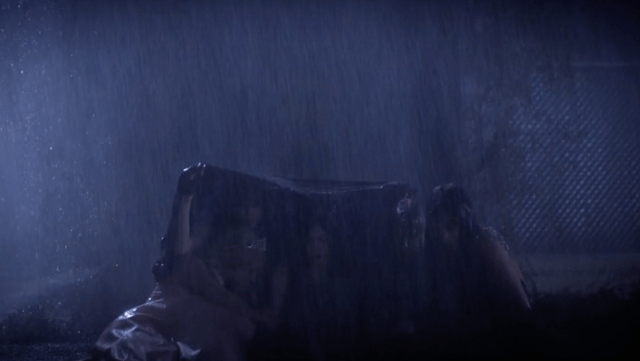 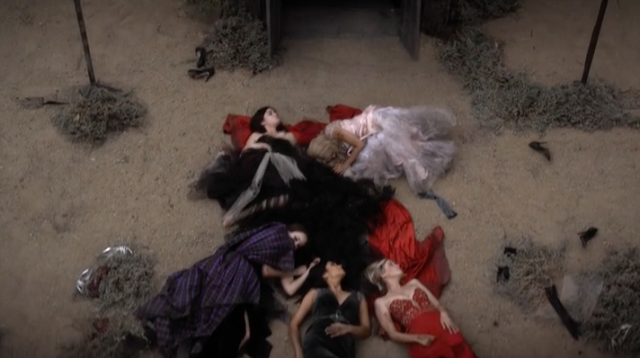 “Donate to the SPCA today to help homeless kittens and puppies.”

Outside, Emily does not try to scale the fence because Spencer screams at her to STOP IT so she doesn’t get fried like an egg. Charles is real mad, though. Women are for being puppets! How dare they act like some Pinocchios! So he shuts them outside and they’re forced to huddle under a tent made of prom dresses while the sun beats down on them and the rain lashes down from the sky. Mona and Spencer assure everyone they can last for three weeks without food, but also maybe not quite as long without water. When they’re just about to give up and die, the cellar doors spring open and the disembodied airport lady voice is all, “Please follow the lighted path to your doom. Please follow the lighted path to your doom.”

And of course, they get gassed and Mona gets Vandernapped right in front of their eyes.

When the Liars awake, they are lined up like they’re in a morgue, their naked bodies all covered up with single white sheets. 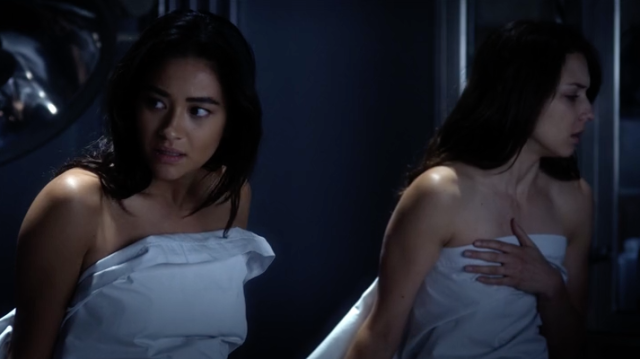 Are your boobs still there? 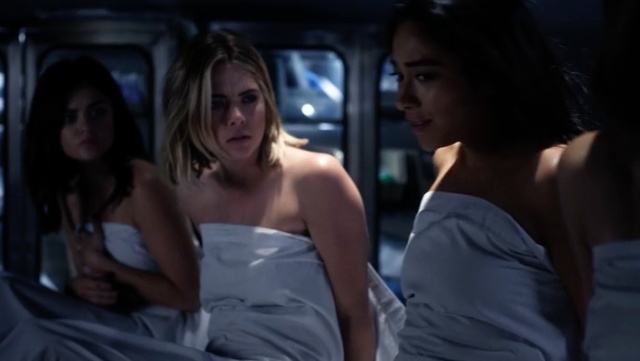 Is that code for something gay?

Emily: I wonder if we’re all laid out like corpses so Charles could take our photos and torture our families with them.
Spencer: Oh, honey. You are dehydrated. None of us have parents, you least of all.
Mona: Hello, everyone. It is me again, Alison DiLaurentis from the hole in the yard. Who would like some juice?

Everyone is freaked out but their only choice is to follow Charles’ directions and return to their individual rooms, where they each find a boggart, I guess, because man, they scream. Hanna’s boggart is a dead Caleb and a dead Ashley, both of them killed by that gun she couldn’t bury deep enough at the frat party with the plastic cup. Spencer’s boggart is her asking the Sorting Hat to put her into Ravenclaw and the Sorting Hat laughing in her face. Emily’s boggart is a video of every girl she’s ever loved leaving her by either getting murdered, or getting arrested for doing murder, or leaving town to keep from getting murdered. And Aria’s boggart is FanFiction.net, where every Liar is paired with Emily a hundred times in a hundred ways, and people only ever write her fucking Ezra. 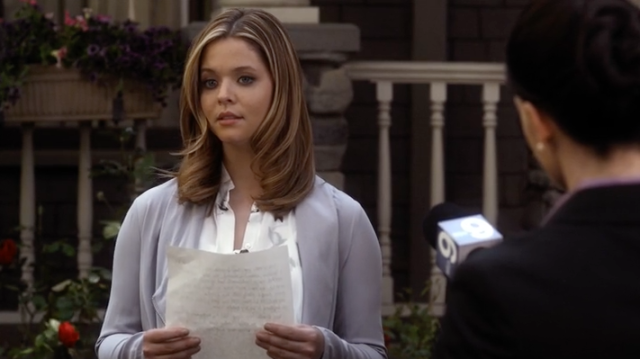 And now for some Emison fan fiction.

It is three weeks later (wouldn’t it be funny if this was the big rumored time-jump?) and Alison DiLaurentis walks out her front door dressed alarmingly like her mother, same hair as her mother and everything, to address reporters about the kidnapping of her friends. She names Andrew Campbell as the perp and asks everyone to please just leave her alone for a little while. She was murdered by her own mom, pulled from her grave by a magic-eyed sorcerer, forced to ride a Greyhound bus around the country over and over after she crashed her airplane, reunited with Emily in homosexuality for one glorious night, framed for murder, jailed, beat down with an iron, trialed for murder, acquitted for murder, and now her friends have all been stolen away. I mean, she doesn’t have Ezra Fitz-style Real Problems, but she’s tired. She needs a little break.

Inside her house are all of Rosewood PD’s finest, including Tanner and Toby, and they’re like, “Thanks for letting us use you as bait to lure Andrew here. He’s for sure the bad guy.” Ali lets them think this was their idea and she’s happy to participate and she totally believes it’s Andrew, but she’s Alison Motherfucking DiLaurentis, so you know she’s got six games going on behind this one because she’s the only one who can save the Liars, has always been the only one who can save the Liars, and, as usual, the police are just harshing her hyperreality. 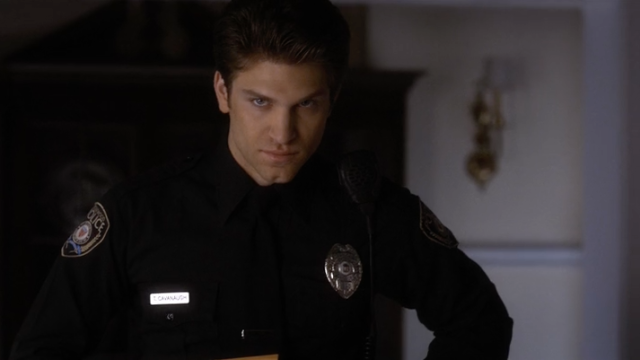 You said the lesbian fan fiction contest was over! 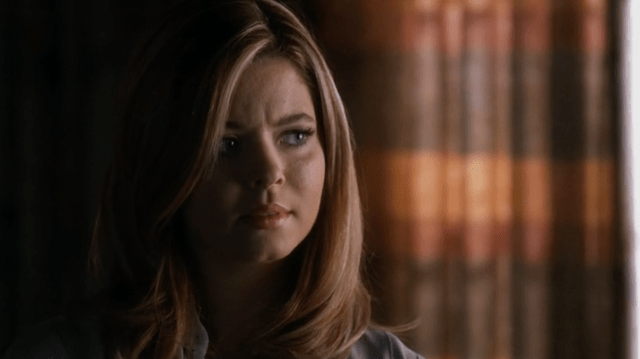 For example, the sound of a door opening fills the room and Toby nearly blows out Jason’s brains as he walks in carrying a sack of food from Wendy’s.

Ali’s phone rings and the cops get all their tracking gear set up and let her answer it. “Don’t Sit under the Apple Tree (With Anyone Else but Me)” plays, which is amazing for so many reasons, not the least of which is that it’s by the Andrews Sisters. And also, this is the perfect Alison/Emily song, like, “I gotta go fight this war, but don’t make any postcard plans for Paris with anyone else while I’m gone, okay?” And the song was used in Private Buckaroo, which is a thing I’ve been thinking of calling Toby for a full year now. The cops trace the call and guess what? It’s coming from inside the house, because duh.

Tanner locks up Alison in the wine cellar and tells this one new lady cop not to leave for any reason whatsoever (spoiler alert: she fails at that job) and goes creeping through the house looking for A. What they find instead is a mannequin wearing a black hoodie and pig mask. Ali’s phone rings again. Tanner answers it. It’s just pig squealing noises.

When the cops return to the wine cellar, they find that the lady cop has abandoned her post and someone has broken a bottle of Pinot and absconded with Ali. 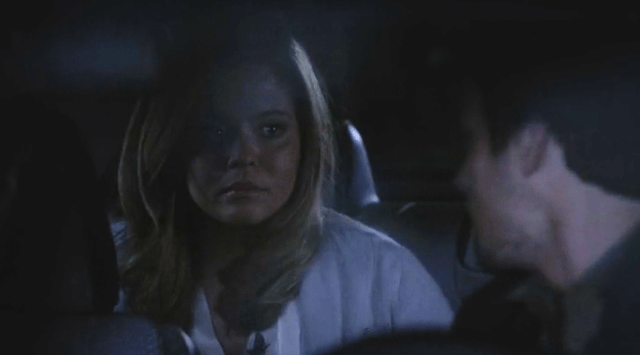 Before we go, I’d like for Ezra to list all the ways he was complicit in allowing this shit to happen. 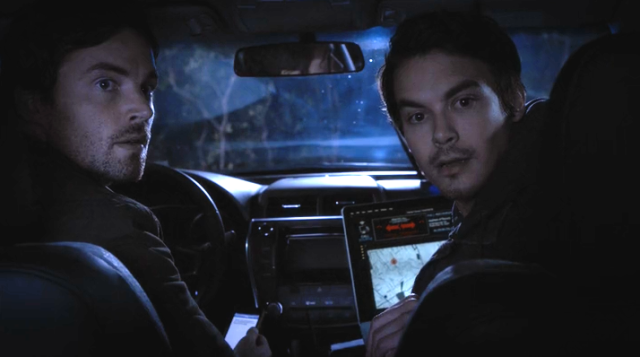 That list would take three years to read. We really need to get going.

Ha! Nope! Alison and Toby foiled the cops! He’s the one who did the cyberhacking to make it look like A was calling from inside the house, and she’s the one who masterminded this whole plan and faked using herself as bait so she could escape and actually use herself as bait. This is great! This is so great! All along, we’ve been wanting to see the show flip it around and show what’s going on backstage at the Pantomime of Alison DiLaurentis! How her duplicitousness is part of a larger, unknowable plan for keeping her babies safe! 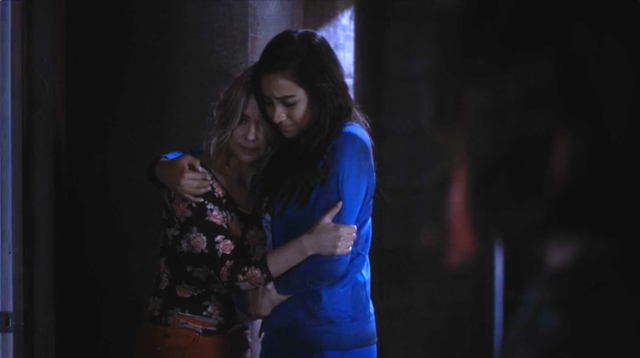 I couldn’t turn off the TV! It was just reruns of Two and a Half Men, over and over!

Caleb gives Ali some shoes with a tracking device in the heel. It’s halfway to a good idea. She needs to be microchipped.