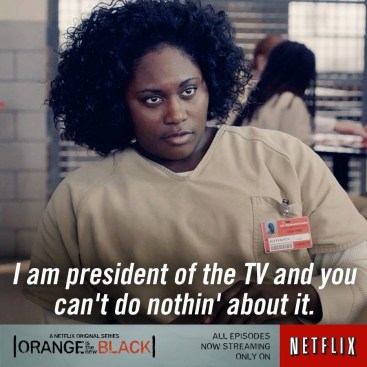 Orange is the New Black‘s third season begins this Friday and apparently not everybody is as excited about it as I am. There are some very upset humans on the internet who did not like this show one bit and who disagree with Netflix’s suggestion that fans of Breaking Bad might enjoy this program.

So, what follows are excerpts from negative reviews of Orange is The New Black I found on Amazon and Netflix.

Many of these opinions are totally valid, especially the ones about Jason Biggs.

Many of them will make you wish the reviewer would sit on a knife.

All of them have been ripped mercilessly out of context for your entertainment.

1. The main character has the personality of a dead fish and where did they get her boyfriend, the used toilet brush store?

3. THIS TYPE OF GROSS SEXUAL HUMOR IS TYPICAL OF THE KIND OF CULTURALLY CORRUPTIVE TRIPE RUNNING RAMPANT IN MEDIA.

4. I’m a gay male, and nothing about the female body or female sexuality excites me; in fact, it turns me off. So just the idea of a women’s prison doesn’t automatically get my juices flowing, and the abundant nudity and sex in this series leaves me cold and irritated. On top of that, every single character in this series is annoying, from the leads to the very least of the supporting roles… A Jewish nerd is pretty much my ideal man, but there’s something very creepy about Jason Biggs (he isn’t Jewish, for one thing) that negates any appeal the character might have. There aren’t even any real villains I can hate, just dozens of petty, stupid, ugly, obnoxious jerks, who spend all their time posing and snarling.

5. Two sets of breasts in the first 50 seconds told me not to bother.

6. This country is doomed, I might be switching back to something like an AM radio station for my entertainment

7. If you have a Y chromosome, an IQ in excess of your belt size or have ever considered voting Republican, you are NOT this show’s targeted demographic. You have been warned.

8. Overall imo this show is a disaster, but if your an American and like idiot American tv then this is probably right down your alley.

9. These inmates come up with words and knowledge that are supposed to be witty, when you know in reality, women prisoners would not even have that vocabulary.

10. This is just about some dumb girl who smokes pot and decides too go to jail because she got too bored of watching Half Baked and not working

11. I had no idea the program was so vulgar and pornographic

12. That one inmate has been pregnant for 2 years and she’s not even showing yet!

13. Is it me or all the guards have their american flags on backwards?

14. It made no sense for the Russian lady to get so pissed about someone insulting her food when a few episodes later she complains about her crappy ingredients.

15. This is more for gay people and I just couldn’t get into it.

16. Quite inappropriate. I only watched 5 minutes of the first episode before i had to watch something else. Well I am only 13…..

18. WHY… is this always on the “New Releases” list, when it’s been created and promoted by Netflx since 2013? Do you suppose they are desperate to wring every last viewer out of it? No amount of “not interested” or One stars seem to get them to leave me alone… C’mon Netflx, this is NOT new, new, new!!

19. Also no one likes Jason Biggs… HE SUCKS SO HARD. Who the hell wants to watch Jason Biggs beat off?

20. I hate the theme song. I always fast-forward through it. It’s frustratingly vapid, so I do my best to avoid it. It adds nothing to the show except some teenage caterwauling, which the shows doesn’t benefit from.

22. If you’re into mild Lesbianism (or shocked by it) maybe you’ll be interested or you’ve lived a sheltered life.

23. More horrifying than The Exorcist as well as more morally compromised, more disgusting and more damaging in intent.

24. If you don’t mind watching in every episode probably two scenes with women shoving their faces in each others crotches without any lead up for the scene or romantic love, than this is the series for you.

25. Sexist in the worst way. Horrible portrayal of men. If women were portrayed the way men are in this show, people would be up in arms.