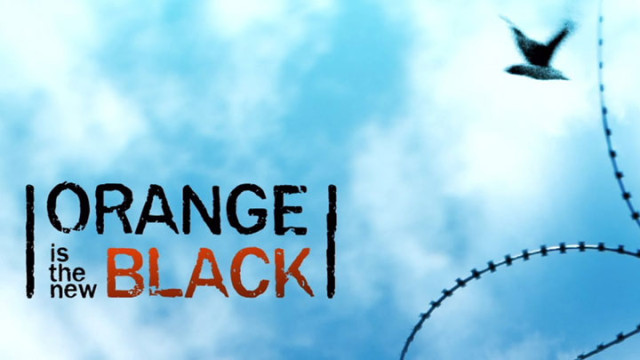 The internet is currently filled with the love juices of thousands of queer-identified ladies wet for Orange is the New Black. Netflix has somehow managed to stay afloat and functioning, providing instant download for all to enjoy. Almost every queer lady status update I’ve read has mentioned being in the process of watching OITNB or professing their undying sexual attractions to a multitude of characters (a large chunk of them being hot in the pants for Poussey. -cough-).

Whenever something gets shared around my feeds in a frenzy, I step away. Lezbehonest: I’m skeptical of any media that is gleefully consumed without critique and anything wrapped in the sacred canopy of “there’s a pretty white girl on the teevee” also gets a fair degree of side-eye. But the ads for OITNB kept poking at me from bus stops on Fordham Road, to Autostraddle reblogs on Facebook and it’s not like I don’t have a thing for prison shows ( Scared Straight is that shit sometimes). So I gave in and decided to watch, mostly because Jenji Kohan is the creator of the show and I loved loved Weeds. Also, I’m always curious about the things that get white lesbians all a flutter. Tegan and Sara was a win for me, so why not OITNB? 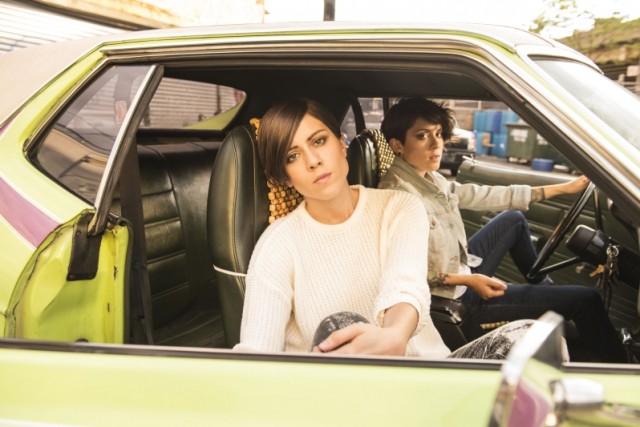 It’s important to be super fucking aware of why a show or movie resonates so deeply with people and with ourselves. Is it really just lesbian representation that clicks a switch or is it a mixture of groundbreaking television and old school tropes that no one dares to dismantle? And it’s not just about dismantling the patriarchy, it’s about responding to art. That’s why part of the reason why people create, right? To evoke emotions, thoughts, fucking feelings from the people around them. I’ve got mad feels, ya’ll.

Real Quick: A Legend for the nicknames I gave to characters from OITNB

Seven Things from OITNB That Deserve Some Real Talk 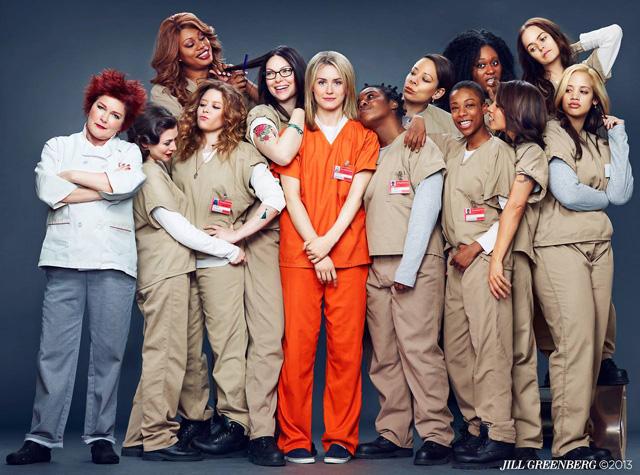 1. Of course, the main character is a pretty blonde white female with access to wealth! (even if that money belongs to other people.)

This isn’t even the fault of Orange is the New Black. This shit is just life. Close your eyes and tell me about your favorite show where the lead actress was/is a Native American, Dominican, Mixed-race or something other than white. Now name a show that isn’t Scandal. It’s ok. Like I said this is just another instance of a good show where I just have to nod my head and accept the fact that it’s about a white woman and her friends and her life experience. Yes, Virginia, there are other characters on the show that get a shot of screen time but our real emotional investments are to be centered on this one character. Now unless I limit myself to watching Univision and BET for the rest of my life, a white female lead usually opens the door to characters of color. 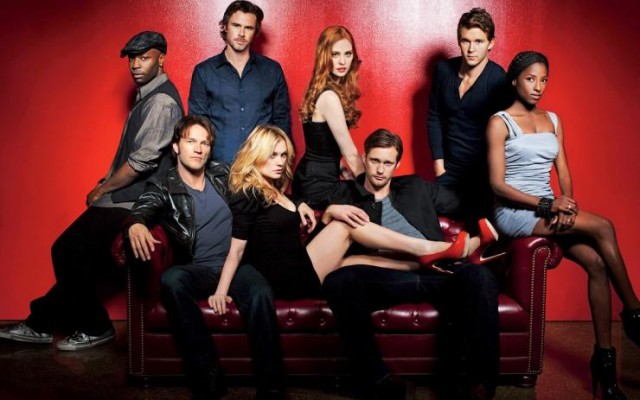 Sooki led us to Tara and Lafayette. 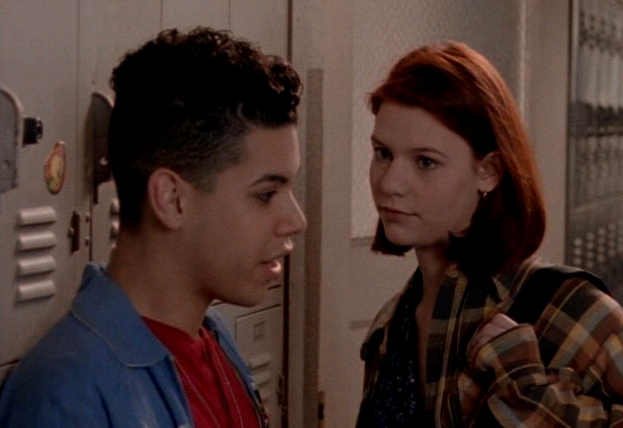 I was going to finish this up with a picture of the cast of Dr. Quinn Medicine Woman but I felt like that would be overkill.

Do you think if this was a show about Main Character White Girl’s Life with Nebbish Boyfriend there’d be any POC characters involved in a nuanced way? Nope-ity Nope Nope, my friends. Main Character White Girl has to engage with people like Sue, Poussey and Taystee and the whole [email protected] Clique because they’re all doing a bid together. The reason this show can dive into characters of color so deeply is because in prison (TV prison, I’m referring to TV prison because I’ve never been to prison and don’t want to assume anything about that life) even though people are segregated by race, they still have to deal with each other. That’s the reason we can even have this discussion or this show because it’s set in a prison. Also, the prison system set up in OITNB also allows for all of the characters to experience an equality of sorts. None of the POC are in service to Main Character White Girl; they’re not her maids, sassy co-workers/underlings, nannies, or someone that makes her coffee at Starbucks (oh hi, Lena Dunham). They’re in prison just like her and bam Main Character White Girl, welcome to the first time you’ve probably ever had lunch at a table with a group of black women.  Just like take that in… even if it doesn’t mean anything to you, just sit with that shit for a minute. 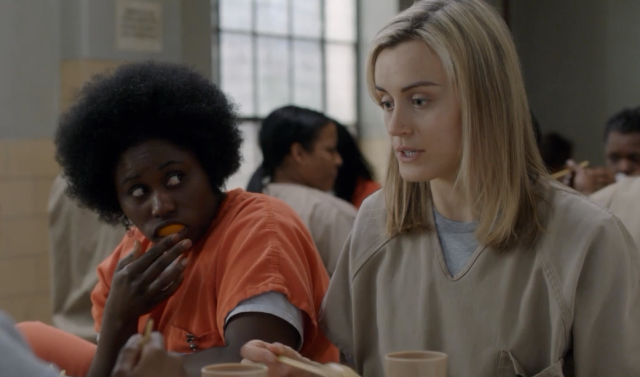 So we’re supposed to give a fuck that you’ve got problems?

And to be clear, again it’s not just an OITNB thing, it’s a life thing. People of color and white people seem to only exist on shows together within certain genres: Crime/Justice System, Reality Housewives TV, Hospital Dramas and Sesame Street.

3. Stereotypes are delicious and uncomfortably real.

I wanted to be mad about Daya getting pregnant, like damn of course the [email protected] folks are the only characters with pregnancy as part of their storylines because all we do is pop out babies, ya’ll. Opp! I just popped out another one while writing this. But then it’s like — why does that upset me so much? It’s not like it isn’t part of real life. Lots of cousins, lots of pregnancies and babies and baby showers and oohh they’re having another baby and oohh she’s pregnant again, lots of tears in delivery rooms and it’s a beautiful thing. Am I playing into some unchecked shame shit? Like the media has framed stories about pregnant women of color in such a way that I’m embarrassed to see it on television? Is that a thing? Or am I justified in wishing that the pregnancy storylines weren’t just for the [email protected] folks? I don’t know. What are we supposed to do when we see stereotypes that aren’t completely ridiculous and speak to elements of our everyday lives? I don’t know all the things.What do ya’ll think?

How does it feel to see Poussey and Taystee interacting with each other in a way that can be considered a stereotypical representation of black female friendship? I’m caught between loving them and wondering why this is the most visible way a relationship between black women is portrayed. 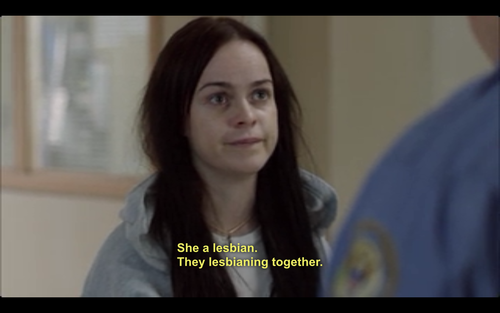 Pensatucky gives Main Character White Girl that “you ain’t no kin of mine” look in every single episode. I love that there is a place in this show where whiteness isn’t a free pass to friendship or loyalty. Can we talk about class for a second? Like how people like Main Character White Girl and Pensatucky are also pretty much never on the same TV show and don’t often party in the same bars in real life? What is it like to talk about “white privilege” when you’re living below the poverty lines and addicted to meth/heroin etc?

5. Main Character White Girl seems to be the only person in this prison with a life worth returning to on the outside.

The fuck? First of all, the whole [email protected] clique seems to either be related to each other or just happy as hell to be up in that bitch, so no cares about getting out. Poussey and Taystee are in love or something so no need to be freed. Obviously, the situation Taystee faced outside of the legal system is super real: no home, no family, no job prospects etc. Kohan is seriously a master at weaving real life throughout this show BUT it still all fits into this strange narrative that only Main Character White Girl has a real life. She is the one that needs to be saved. Listen, I get that it’s based on the adventures of the real Main Character White Girl that went to jail but the only reason a memoir like that blows up is because innocent white girls are not supposed to go to prison. Tell me a memoir about someone like Tastyee that gets a movie, TV show and book club… and if you say Precious...

6. Why aren’t the QWOC getting any action?? 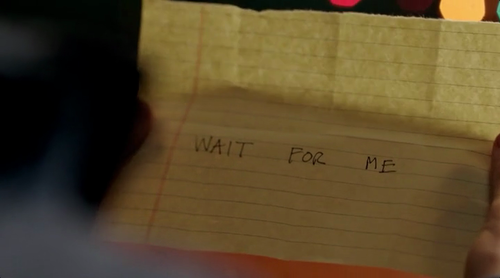 And by action, I mean sex. This is kind of like “Queer-Baiting: The QPOC edition.” So Cornrows and her boo get to smooch, Wild-Eyed Junkie Lyonne gets to smash her hands down That 70’s Show’s pants and Main Character White Girl gets her church freak on but but… no ladies of color get down with the get down? Sue’s sexuality is dismissed by Main Character White Girl because Sue is scary and not gentle and not a pretty soft unicorn lesbian. None of the [email protected] folks are dykes (just yet). Sophia’s relationship with her wife makes me weep every time they’re on screen together. And we also have the tender unspoken thing between Poussey and Taystee, as far as love representation goes. But why aren’t the black and brown queermos having sex on this show? I’d like to see some bodies like mine tangled up sweaty naked awesome. Main Character White Girl and That 70s Show do nothing for me.

THAT LAST EPISODE. HOLY SHIT. And when it was over, all I could think was “so that’s what happens when a white person is stripped of all of their white privilege”. SHE KILLED A BITCH. (Or, almost killed a bitch.) Main Character White Girl’s whiteness no longer held any weight. Her pretty little face, assumed innocence and NPR connections couldn’t be used in any way, not to give her another chance or to save her life. In that moment, Main Character White Girl realized that the world gave not one fuck about her and she was gone. 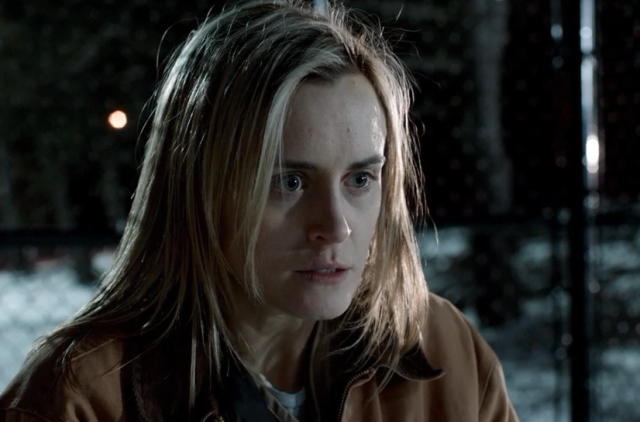 Wait, what? No one’s gonna save me? Did everyone forget that I’m a White Woman in the United States?

So those are all of the major serious feels for Orange is the New Black. Look, yo, like I said, the show is pretty awesome. I love the diversity of characters and the sex and all the shit that lots of people dig about this show. But does that mean I have to watch it without critique? Whenever something awesome or momentous is given a critical eye, people freak out! Like “CAN’T WE JUST HAVE SOMETHING? WITHOUT YOU HATING ON IT” kind of freak out… and like, chill. Sure, we have good things, good TV things but why not have some feelings too? If art can’t create dialogue within communities, then what is it good for? What are some of your  inflammatory feelings? Are you feeling defensive or like this whole article is on some bullshit? Do you give one fuck about the show that almost every queermo you know is rightfully in love with? Orange is the New Black gives me some hope for the future of multi-representational media. Hope is good, ya’ll.