Welcome back to another hot edition of Boobs on Your Tube! This week, Heather reviewed the hopeful and gay second season of She-Ra! Always one to keep up with trends, Heather also would like you to know that Anne Lister kept her ex-lovers’ pubic hair in lockets. Tell all your friends about this keepsake for Valentine’s Day! Valerie recapped a really important episode of Supergirl and another  loveably bonkers episode Legends of Tomorrow. Kayla took us all to Riverdale’s prom (and Cheryl’s slow dance with Toni) in this week’s recap. Carmen ranked the 15 gayest moments of Avengers: Endgame (spoiler it’s not that gay, but it is delightful) and gave us a sneak peak at Vida’s second season trailer!

Reminders and Fast Thoughts from the TV Team:

+  Preview scenes for the upcoming episode of The Good Fight finally confirmed that we have not seen the last of Maia Rendell. Based on the preview, though? No more, Ms. Nice Gay. — Natalie

+ Y’all I swear I’ve been watching The Flash for you waiting for one off-hand comment, one stray wink, anything to imply the writers remember they made Nora bisexual, but alas. No such luck. I’m so sorry. — Valerie Anne

+ Murph’s roommate on In the Dark continues to make out with her girlfriend. Not much more re: development there yet. Though this week Jess’ girlfriend said they were going to an Ani Difranco concert and Murph responded, “Ugh, be gayer” so that was pretty hilarious. — Valerie Anne 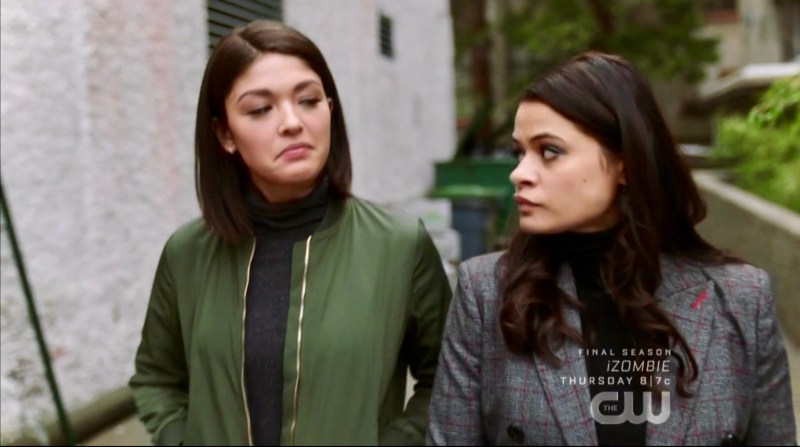 “Hmmm, I wonder if it’s true what they say about witches and their nimble fingers?”

Hey remember when Mel told Niko that she was witch? Even though earlier this season she was told by The Elders that she had to erase Niko’s memory, because it would be incredibly dangerous for her detective girlfriend if she ever found out the truth? Of course you do because that was just last week! Now Niko knows the truth (well, about the witch part, not the memory erasing part, more on that later) and all bets are off.

Mel and her sisters are tracking their new Whitelighter, Tessa, in hopes that she leads them to their old Whitelighter, Harry. Mel’s working the case when she’s ambushed by Niko. The P.I. ex-girlfriend has lots of questions about the S’Arcana and magic and, you know, the whole Mel is actually a witch thing. To be fair, Niko is taking all this mystical news incredibly well! I would’ve completely lost it by now.

Mel’s hesitant to tell Niko any more than she already knows, in part because it’s dangerous and in part because the closer Niko gets to the truth – the closer she will get to finding out Mel’s dark secret that she erased Niko’s memory in the first place. But Niko barters her detective skills as a P.I. to help Mel do her super spy tracking, and off they go! It’s a super fun, and mostly lighthearted, caper that involves a lot of Niko getting all wide-eyed with wonder at magic (side note: wide eyed with wonder Niko is definitely my favorite Niko).

When the case winds down and everything’s wrapped up for the week, they go to Mel’s bar to celebrate. Niko opens up to Mel that two years ago she had a nervous breakdown, that’s what led her to leave the police force. Of course, that’s not what happened. But Niko can’t remember the truth. She just knows that something traumatic caused her a lot of pain. Mel’s face is like a teardrop took human form. She never meant to hurt Niko, let alone cause her trauma.

Feeling a bit helpless to stop Niko from her path, Mel offers her a ring. It will protect her from all magic. (Though I have a question, if there was some magic protecting ring out there, then why did WE HAVE TO ERASE NIKO’S MEMORIES IN THE FIRST DAMN PLACE??? ) Mel looks her straight in her eyes, full of pain and resolve, and tells her this: Learning the truth won’t be able to change what happened, but it could help Niko begin to move forward.

Niko may not have the complete story yet, but she will soon. It’s only a matter of time. I can only hope that when it happens, Mel’s lucky enough for Niko to forgive her. 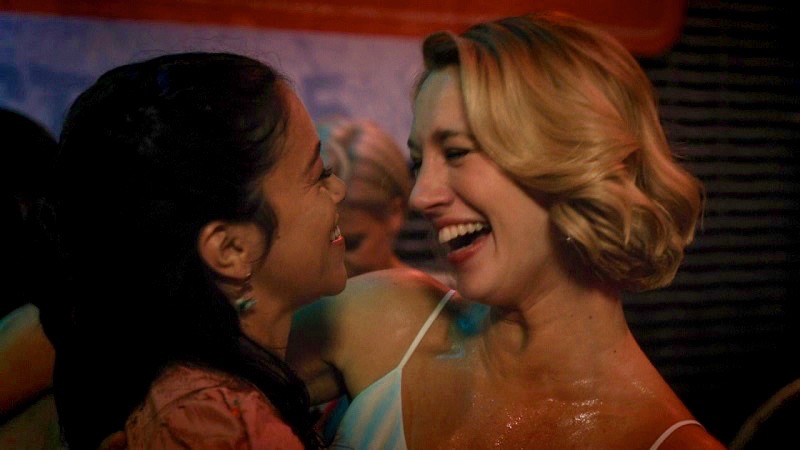 When we catch up with Petra this week, she’s insta-stalking one of JR’s friends, Leona (played by out bisexual actress, Zelda Williams). Jane interrupts, worried about how Rafael’s handling their break-up, and asks Petra to talk to him. Petra’s short and dismissive in response but as soon as Jane’s out of earshot, she calls Raf to talk. Later, JR stops by with Leona to sort out Petra’s tech issues and Petra tries to curry favor with JR’s BFF using the results of her insta-stalking. That does not go well, but Petra’s trying! To show her appreciation, JR extends an invite for Petra to join her and her friends at a local gay bar.

Petra Solano. In a lesbian bar. Wearing (someone else’s) jeans. Yeah, this does not go well either.

Before Petra can embarrass herself anymore at the bar, she gets an unwelcome rescue from Jane who shows up looking for more answers. The truth about Rafael spills out — he’s taking antidepressants — and with it comes the truth about Jane and Petra: Jane’s split with Rafael has impacted their friendship, too. Petra yells at Jane for creating this chaos. Jane shouts back that she can’t help how she feels and if Petra were really her friend, she’d support her.

But the person who needs support, right at that moment? Petra. In a bid to impress JR’s friends, she pulls Jane on stage for the “Tatas and Tushies contest.” Petra is a bad dancer … like, really bad … like Elaine from Seinfeld bad. But the awkwardness eventually turns celebratory and the girls end up, smiling, bathed in champagne, and hugging as the crowd urges them to kiss.

If this were some other show and this exact scene happened, I’d probably be having a very different reaction — it’d be hard to find the humor in the queerbaiting — but Jane the Virgin has earned its reprieve. On almost any other show, upon learning that the audience saw chemistry between two ostensibly straight characters, the writers would’ve worked to deaden that chemistry (*waves at Blindspot*). They would’ve forced the characters to opposite corners of the canvas, their interactions rare and always imbued with a reminder of their straightness.

But Jane the Virgin has taken a different path with Jane and Petra. Their lives are more intertwined now than ever and they genuinely love each other. Petra is in a wonderfully committed relationship with a woman and while we don’t know yet if Jane will end up with Rafael or Michael, we know for certain that Petra will always be there.