Remember when Grace Choi inexplicably left her girlfriend by literally running away from her in broad daylight in a park and no one went after her like that was a completely normal thing for a person to do? Oh wait, that was just last week? Huh! This show you guys, what can I say! It’s a laugh a minute, in between all the racial justice crime fighting and thunder bolt zaps.

Anissa’s sneaking around Grace’s empty apartment and poking through her drawers. She could definitely learn better spying skills from Gambi, but that’s fine. She discovers a photo of tween Grace with two older adults who Anissa assumes are her parents or grandparents. She also finds Grace’s top secret-y “keep my super powers under control” pills. And that’s when things get really interesting. 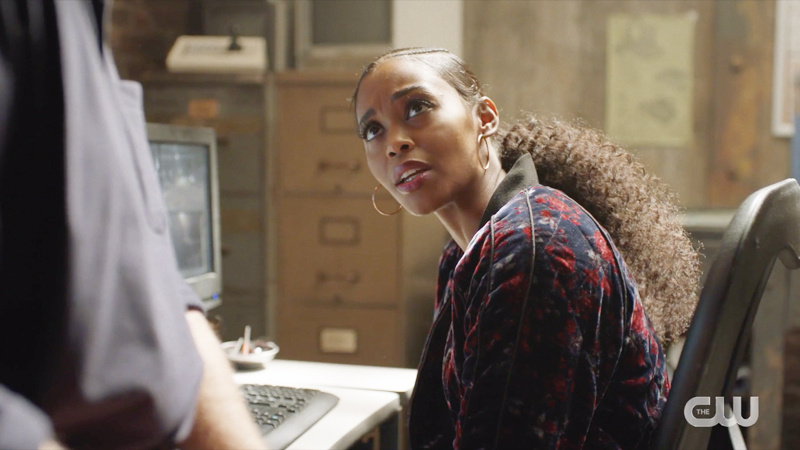 What do you mean Bey wasn’t nominated for a solo Grammy!?!? She has to share win her with Jay-z?? I don’t care that he’s her husband! I DON’T CARE!!!

Anissa takes her findings back to the Gambi’s lab for testing. First of all, Gambi is in full on adorable uncle mode, which y’all know is a lot coming from me because I’ve never trusted the spy-turned-tailor. Still, it’s hard not to warm to his gushing over Anissa finally having a romantic partner that means enough to her that she’s including her in the inner circle. We all know Anissa is a commitment-phobe (Gambi knows it, too), so this is Very Big Deal.

Anissa blushes under his questioning, “You know how the old folks say, you don’t know what you’re missing until it’s gone?”

Yeah Anissa, we DO KNOW. Maybe try appreciating the hot bartender/comics geek while she’s standing right there in front of you next time, instead of asking for sympathy from the viewing audience after the fact. Ok. I promise, I promise — we aren’t going down this rant again (Black Lightning writers, do better). Moving on.

Gambi hasn’t quite cracked the case on Grace’s top secret pills just yet, but he was able to run facial recognition software on the adults in the photo. If you aren’t sitting down, now is the time because — deep breathe, exhale — Grace Choi Doesn’t Exist.

There is no record of a Grace Choi anywhere. The adults in that picture? They were the foster parents of Shay Li Wylde, who was bounced in the system quite a bit as a kid. They died. Shay Li was sold to a human trafficking ring and forced into sex work until her pimp mysteriously died. That was the last time anyone heard of Shay Li.

Until she showed up in Freeland with a fancy new fake ID.

I’m not being flippant about this. I absolutely will not make light of a young girl of color, abandoned by very systems that are supposed to protect her, ending up abused and forced into sex work. Human trafficking is on the rise in the United States. It’s the world’s fastest growing crime, with more than 70% of the victims being women and girls. Atlanta, where Black Lightning films and a majority black metropolis that is no doubt one of the inspirations for the show’s depictions of Freeland, is one of the national hubs for the sex trafficking of young girls. This is a storyline that hits close to home. If Black Lightning is really going to go there, I hope they are ready to take it seriously and with the utmost respect that it deserves. This isn’t something that can be introduced and then swept under the rug or forgotten.

It also happens to be faithful to Grace Choi’s original origin story in The Outsiders comics. In that ‘verse, Grace ran away from an abusive foster home at nine years old before being kidnapped while living on the streets. She’s sold into a child sex ring led by a villain named Tanner. Her famous tattoos? One of them is a Tanner’s branding. (I’m so glad I didn’t read this series. I know comics can get dark, but this is a lot. I’m already overwhelmed with tears just at the thought.) Grace escapes Tanner’s ring as a teenager when her superpowers finally kick in. I have a feeling that Shay Li Wylde’s transformation into Grace Choi will have a similar backstory.

Anissa’s heartbroken that Grace has lived through so much pain. She doesn’t care what Gambi says (or Jennifer, who’s apparently known that Anissa had a girlfriend this whole time? And for some reason thinks Grace just ghosted Anissa for the hell of it?), Anissa knows what it means to keep a secret because you don’t know who you can trust. If she can be there for Grace, if she can stand with her, comfort her, and tell that she doesn’t have to fight alone anymore in this fucked up world that treats women of color like disposable playthings for the rich men around them —  then that’s exactly what she’s going to do. 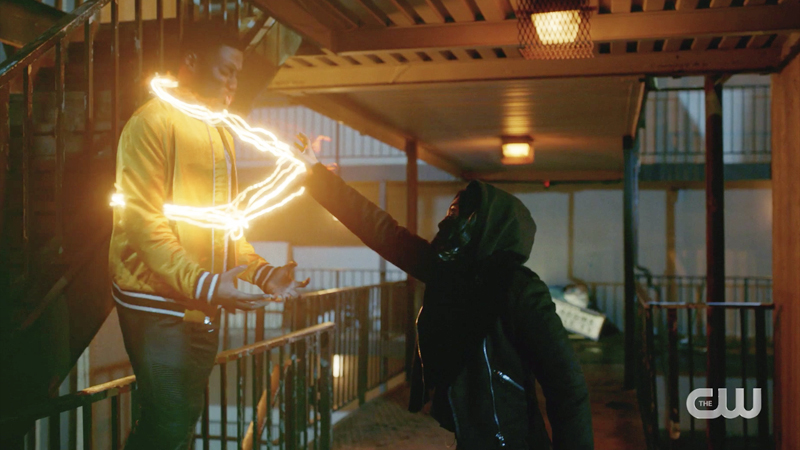 Some other things happen while Anissa was on her quest. Jennifer is not willing to wait another second to safely devise a plan while Tobias Whale gets to walk around breathing. Hot headed and impulsive to her core, she decides to go after him herself. It’s kind of cute that the One Hundred gang leader mistakes her for Anissa (err, Blackbird) at first? Right? Until all the gang members surround her and she almost dies!  That part is… less cute.

Jefferson has decided that he’s ok with the racist white man running Garfield High afterall? That makes zero sense, but whatever. And Tobias’ new supervillain team up includes: Cutter, Dr. Jace, and new muscle in the form of Marcus Bishop. Bishop, otherwise known as Shakedown, is a former inmate from 30 years ago who was experimented on and given superpowers by Dr. Jace. Before that he was a football player by the name of Malik Wright on The Game. Remember The Game? A black sitcom legend that got cancelled in the mid-aughts by The CW because TV networks are racist? Then it was revived by BET and aired new episodes for another decade? Aww, good times, good times.

Everyone is taking sides and also THE MARKOVIANS ARE COMING!! So, yeah, lots of drama ahead when Black Lightning returns in March. Until then my sweets, I hope you all have an amazing Valentine’s Day! I’ll have a Hershey’s bar and think of you. xoxo.

Carmen has written 496 articles for us.