Up until the last two minutes, I really enjoyed this episode. I loved seeing Anissa have a real character arc – one that included not time spent with her family, but also her day job at the clinic, dates with Grace, and superhero vigilante duty as Black Bird. I loved watching Jennifer step into her own and find her way to leave a mark in the Pierce Family Grand Tradition of standing up for black lives. I’m even intrigued by Dr. Jace’s continued presence and the return of black Hollywood legend Bill Duke as shady ASA Agent Odell. Everything was well paced, exciting, at times even delightful.

I’ll circle back to those final minutes in a few, but first Dr. Lynn Pierce almost got kidnapped! Right from outside the grocery store! And her bullet proof eldest daughter got SHOT!!!! (Don’t worry though, Anissa caught her breath just in time. The bullet barely made a dent). She had to get saved by Agent Odell, carrying the baddest rifle this side of Shaft and Super Fly!

Anissa isn’t quite ready to forgive herself for, as she puts it, “getting caught slipping” and putting her mother in danger. I would think the bigger lesson here is “Who are the new Mo-Fo’s in town that want my Mama in captivity?” But maybe they are all assuming that they’re more of Tobias’ henchmen as opposed to Markovian special forces looking to gather up intelligence experts on metahumans.

It’s probably time we chat about the Markovians. In DC lore, Markovia is a small European country whose royal family has been used as villains in everything from Batman, to Arrow, and yes, Black Lightning. If you remember, last episode Dr. Jace explained to Tobias that she had been in Markovia to help them develop a metahuman program similar to the Green Light Experiment in Freeland. In the Black Lightning comics-verse, those testings included imbuing the royal Prince with superpowers (he goes by Geo-Force), but we’ll see what happens in the television show. 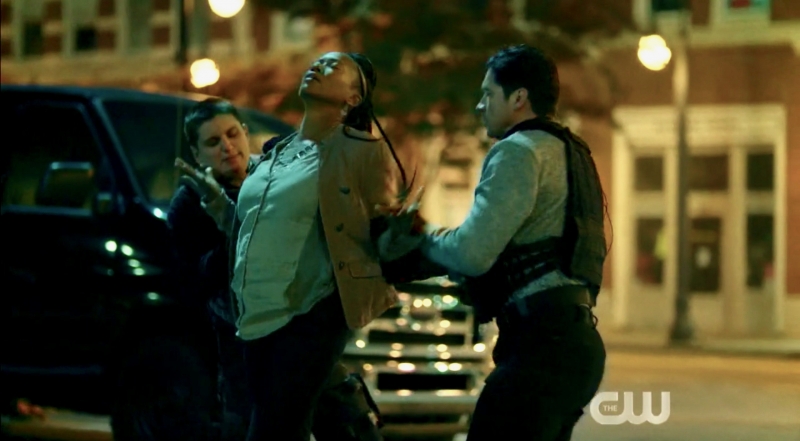 “I summon the power of Toni Morrison and Lorraine Hansberry! Sisters be with me as I take down my foes!”

Now let’s pause for a second to talk about how badass Maxine Shaw: Therapist At Law really is! After the Markovians unsuccessfully go after Lynn, they set their sights on the superpowered empath. They almost grab her, but she uses her mind to enter their minds and trick her would-be captors into believing that they are literally freezing to death! As they drop to the concrete in excruciating pain, she grabs her fallen bags and quite simply walks off. Am I bringing this small scene up because I have loved Erika Alexander since 1993 and pledge to always love her until the day I stop watching television? Yes, I absolutely am. I make no apologies.

While all this is going on, Anissa has a new patient at the clinic, Monique No Last Name. Monique doesn’t have a last name, you see, because her boyfriend Rayvon is a captain in the One Hundred. He’s a serial abuser, but everyone in the clinic is forced to look the other way out of fear for their lives. Everyone that is, except for Anissa Pierce.

Few things in Black Lightning have been as harrowing as watching Anissa’s exam of a domestic violence survivor. Monique says she fell, but we all know different. Anissa treats her with kindness and respect. She greets her in sisterhood. Then she suits up in her signature hoodie and we know it’s time to get to work.

Last week I mentioned that I hoped to see more superhero catharsis in the last batch of Black Lightning episodes and whew boi! I got my wish! What is better than watching Anissa “Black Bird” Pierce (side note: I love that we are calling the black girl Robin Hood, Black Bird now) bust into the den of an abusive gang member, promptly whoop his ass, throw him against a wall and taunt, “I hear you like putting your hands on women? Go ‘head. Try putting your hands on me.”

NOTHING IS BETTER THAN THAT SHIT. Nothing at all!

She also grabs money to pay for Kahlil’s funeral service on her way out the door. The One Hundred pepper spray Anissa in the hallway, causing her to lose her breath control and therefore her super abilities, but thankfully she’s able to fit in one last Thunder Clap and scramble to safety. Still, it’s too close a call. She admits to Gambi that she’s starting to see her dad’s point about the dangers of vigilante work. Do I hope that means we’re about to have an epic superhero team up of all three Pierces? Hell yeah, I do.

Somehow Anissa finds time in between all her Black Bird’ing to be an adorable girlfriend to Grace Choi. I could go on another rant about how it makes no sense that Anissa has keys to Grace’s apartment when we’ve seen exactly zero of their relationship development on screen since before Thanksgiving – and even then they were rocky – but I did that last week. Instead I’ll say this: Nothing made me smile brighter last night than Anissa waking up Grace with sweet kisses all over her face. My goodness! Chantal Thuy and Nafessa Williams have found such love with each other. It jumps off the screen. (Black Lightning writers please honor their work by giving them better writing; you know, like the kind you give your straight couples? Thank you.) 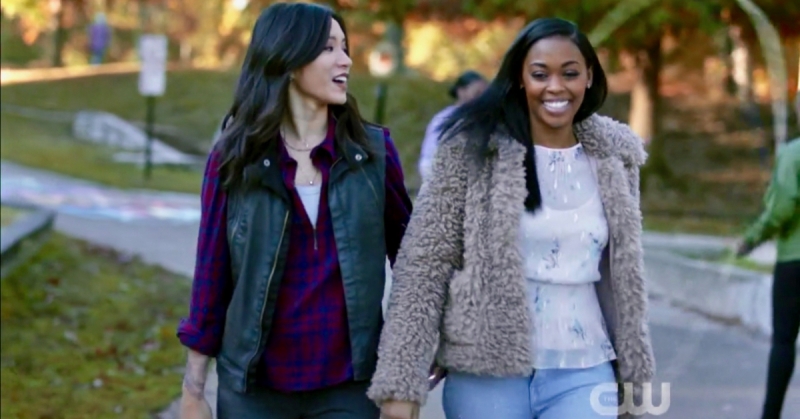 Later, Anissa and Grace are returning home from a movie at sunset – Anissa’s a fan of action films where women blow shit up, because of course she is. They hold hands and smile and Grace looks so gay and so perfect in her flannel/thermal vest combo. Just when I thought my heart would explode from cute, Anissa joins in on a game of double dutch! Are you kidding me? In all honesty, Anissa is a pretty selfish girlfriend. We have enough documented proof to know that it’s true. But then she smiles like that and joins in on a group of black women playing their game and it almost all melts away.

I think Grace agrees with me, so much so that when Anissa invites her over to dinner to meet her parents, she becomes flustered. The problem is that when Grace Choi becomes flustered, she also loses control of nascent powers. First, her eyes flash. Anissa almost catches it, but she turns her head and pretends to cough. When she turns back, Anissa moves to hold her hands again. Except now her skin is doing that thing when it changes to spots.

Grace has only ever wanted Anissa to open up to her. That was the one requirement that she had for re-starting their relationship, her girlfriend’s willingness for vulnerability. Now, Anissa has keys to her apartment. Anissa wants her to meet her family. At the precipice of everything she’s asked for, Grace Choi tells her girlfriend that she can’t. She’s sorry. And then she runs out of her loving hold and away from their date.

Of course, what Anissa realizes after Khalil’s funeral is that Grace has done more than run from their date. She’s run out of Anissa’s life altogether. She returns to Grace’s apartment looking for comfort, only to realize that all of her clothes have been hastily packed, her drawers ransacked. She’s gone. Only leaving the Black Lightning and Thunder comics behind on her living room table.

Those, my friends, are the worst two minutes of the episode. It’s not just about Anissa’s heartbreak. It’s not even just about the continued short changing of Grace’s character development on screen (no, it is a little bit about that). Mostly, I’m upset because instead of being heart wrenched or intrigued by Grace’s abrupt departure, I feel frustrated.

I want trust Black Lightning to do something interesting with this wrinkle. The truth is that at this point, they’ve given me very little evidence that they respect Grace and Anissa’s relationship enough to tackle this new turn with the care and detail it needs. It’s enraging. There is so much potential with Grace and Anissa, it’s almost more upsetting than if the characters had just been two-dimensional to begin with.

I really want the best for Grace and Anissa’s storytelling, not just because I’m queer woman television critic, but because I think they are a key part of what’s going to take Black Lightning to the next level. Their inclusion is crucial to tapping into this show’s bigger picture and greatness.

And, before I get out off here, give us more of Black Lives Matter activist Jennifer Pierce — Please! Forever and ever AMEN.

(Which is also well timed to say, Happy Birthday Trayvon Martin. You would have been 24 years old today. We miss you.)

See you all next week.