These past few months have brought back memories of my student activism days, of cutting my teeth as a feminist, a queer, and an organizer back in the George W. Bush era. Fighting back against threats of federal funding cuts to Planned Parenthood, enduring draconian anti-LGBTQ state laws, marching en masse in Washington, D.C., screaming and chanting and making signs and channeling anger into building community. They say history repeats itself and, while Trump’s level of extremism is jarring, it feels all too familiar to me. I’ve been re-reading the quotes and essays and poems that energized me back then, that called me to action.

Audre Lorde’s The Transformation of Silence into Language and Action is one of my favorite pieces to read and re-read and sit with when I feel silenced or stuck or like I don’t know how to get out what I need to say:

Queer Slam Poet Alix Olson’s Subtle Sister is definitely a relic of its time (2001, to be specific), but these lines come into my head when I’m feeling inspired to sharpen my words:

See, sometimes anger’s subtle, stocked in metaphor
Full of finesse and dressed in allure
Yes, sometimes anger’s subtle, less rage than sad
Leaking slow through spigots you didn’t know you had
And sometimes it’s just
Fuck you
Fuck you
You see, and to me
That’s poetry too
– Alix Olson

There’s a lot of talk about action and “doing,” but today we’re going to focus on words and “showing.” Messaging is a vital part of any campaign. Messaging is about looking at your goals, your targets, your potential allies and opponents, and crafting words that resonate, that will help you win.

Marketing agencies spend millions, billions, kajillions on selling us things with catchy slogans and tag lines. We don’t have those kinds of resources, but we can learn something from marketing execs. Memorable slogans are one way to get people to notice your activist campaign and join you in resistance.

In marketing, there’s a rule of five touches (or three touches or eight touches… there’s a lot of different theories on “touches”), which is the idea that it takes the average person so many times to encounter a message or ask before they remember it or take action on it. So when a company is trying to sell a new product, they want to hit their target buyers multiple ways. As the potential buyer, you see a funny commercial on TV, a pop-up ad on your phone while playing Candy Crush, a sidebar ad on Facebook, a celebrity mention the product on Twitter, and then you happen upon a display in your grocery store. “Oh yeah,” you think, “I think I’ve heard about this new, exciting, must-have thing. Maybe I should try it!”

Slogans can work in a similar way. They aren’t your whole messaging campaign, but they help drive your message into people’s minds, including the media and legislators (if it’s a legislative campaign). A good slogan is: 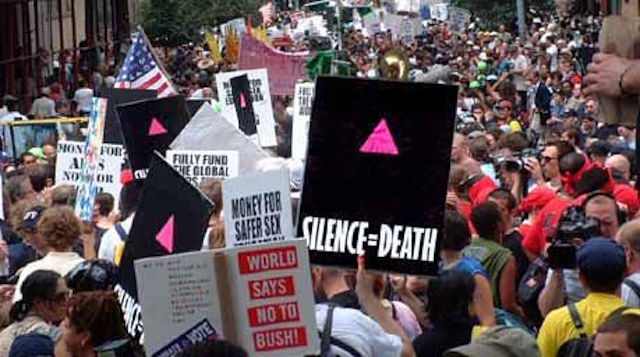 photo via Act Up NY

The “Silence = Death” pink triangle poster was created by six AIDS activists from NYC in 1987 who plastered the city with the simple, impactful message. (The upright pink triangle was a common symbol of gay liberation in the 1970’s, literally turning on its head the inverted pink triangle worn by gay men in World War II concentration camps.) According to its manifesto, the Silence = Death Project meant to draw parallels between the Nazi period and the AIDS crisis, declaring that “silence about the oppression and annihilation of gay people, then and now, must be broken as a matter of our survival.” The creators later joined Act Up and gave them use of the poster and slogan. It’s still used and attributed to Act Up today. 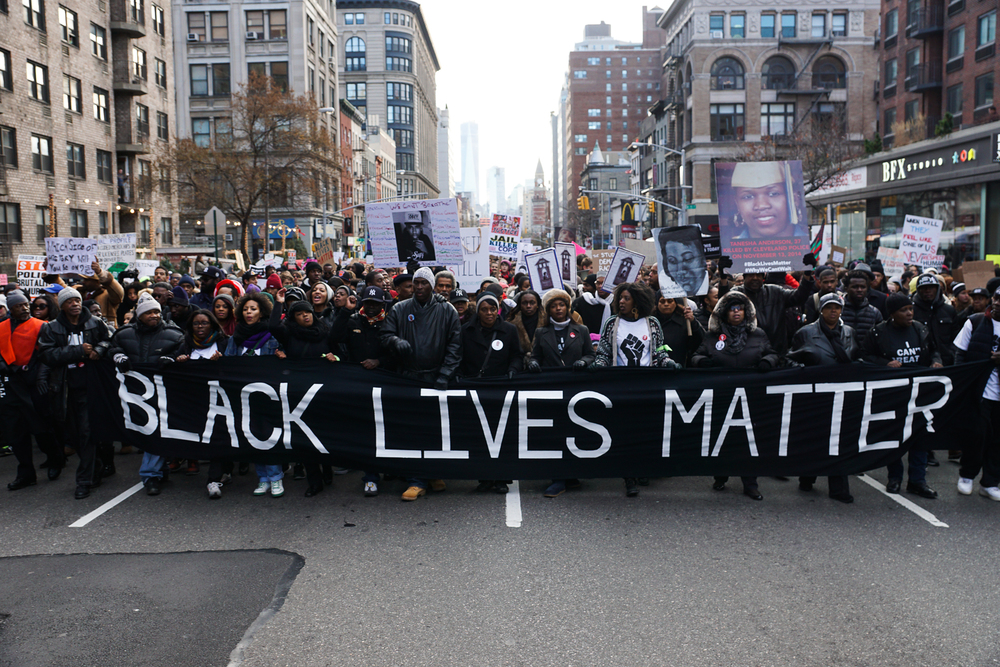 Photo by Julius Motal for Voices of NY

No activist slogan has been more powerful in recent years than #BlackLivesMatter. Black Lives Matter was created by three queer women: Alicia Garza, Patrisse Cullors, and Opal Tometi. Described as “a movement, not a moment” by the founders, #BlackLivesMatter has sparked action across the world, has captured the attention of mainstream media and elected officials, and has changed the landscape of resistance to brutality by law enforcement and by the state. Other powerful message slogans tied to #BlackLivesMatter include “Hands Up Don’t Shoot” to protest the murder of Mike Brown and “I Can’t Breathe” to protest the murder of Eric Garner.

When it comes to giving a speech or talking to the media or writing an opinion piece, it can help to devise deliberate and clearly thought-out messages ahead of time. Some people are naturally good public speakers, but even if you’re good at putting words together eloquently, you still might want to consider whether you are using your most impactful messages.

Messaging is about taking control of the narrative. What words and phrases and key points do you want people to remember when they hear you speak or read your writing? How do we persuade others, who might not share the same values or background as us, to listen and really hear us?

“Show, don’t tell,” was a common bit of writing advice in my creative writing program. It applies here, too. When you tell someone why something is important, that’s fine, but it doesn’t engage them personally. When you show someone why something is important, it nudges them to engage their imagination and analytic skills to come to their own conclusion. Obviously, getting someone to think deeply about an issue is more effective than just telling them it’s important.

How do you “show” that an issue is important? It’s a multi-pronged approach:

Message triangles are a tool used in the art of persuasion. They’ve been developed for salespeople, public speakers, and now, for you, for organizers and budding activists.

It’s great for prepping for a media interview, because it helps you focus on your primary messages and why they’re important. They work better than writing out your talking points because they’re non-linear. You can pivot to any of these key messages at any time in an interview or speech.

It works like this. You put your primary message at the center and then three different key message points around the sides of the triangle, with supporting facts, stories, examples, and messages to support each key message point. Key messages should be brief—only one sentence and in plain words. 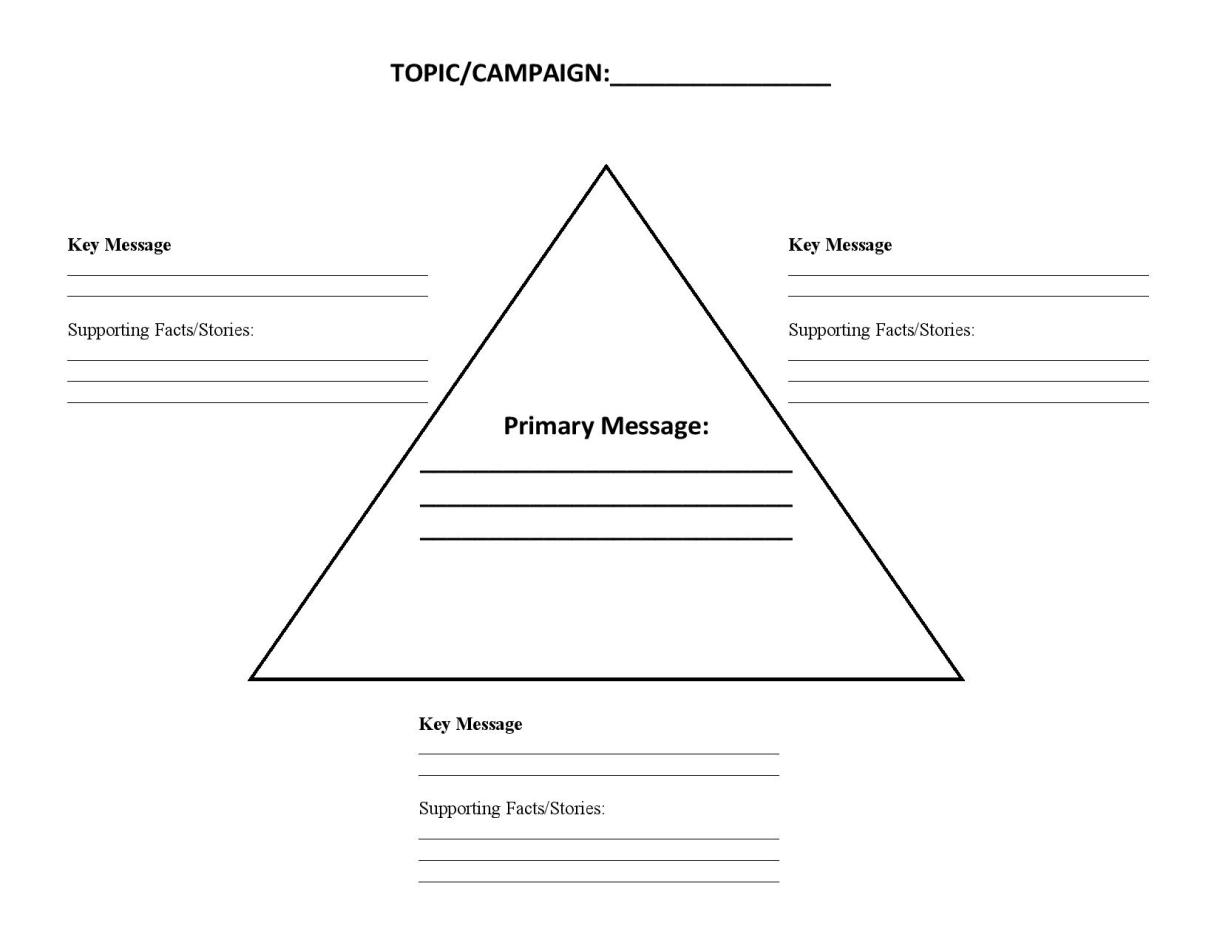 Here’s a simple template you can fill out!

Say What You Want to Say

Especially in times like these, when the press are being shut out of the White House and marginalized groups are being told to be shut the hell up, our voices need to overcome fear.

As Audre Lorde wrote in The Cancer Journals, “My silences had not protected me. Your silence will not protect you. But for every real word spoken, for every attempt I had ever made to speak those truths for which I am still seeking, I had made contact with other women while we examined the words to fit a world in which we all believed, bridging our differences.” Let us speak!

Join A+
Related:be the change