One balmy summer evening when I was 14, my parents came home to find me in front of a fire, bent over a hot piece of metal, beating it with hammer. I had just seen a nearby blacksmith at work, and the roaring fire and the clanging of the hammer on steel had fascinated me. I felt a connection to the medium that was almost primal. It clicked seamlessly into the clockwork of my soul. I studied and practiced for years, working under a local reenactor, and selling forged wares to pay for the tools. I loved it, I really did, but behind my enthusiasm was another motive.

I was assigned male at birth, but all through my childhood I had learned that if I acted like myself, then I would get called a faggot and kicked around the playground. I had been girly for years, and here was a ready-made way for me to do something badass while being able to use it to hide myself in a gendered cloak.

And it worked! Even though I tended to squeak when happy, and skip from class to class, there was no doubt in anyone’s mind that I was manly. Something about my identity as a blacksmith seemed to set me firmly amongst the ranks of the masculine. That was fine by me; whatever it took to not have people doubt my gender. Besides, I was having fun!

Unfortunately, my passion for the craft became less of a blessing when I came out as transgender. People would look surprised and say, “But…you can’t be a girl. You’re a blacksmith!” My adherence to my passion as a gendered activity ended up negating the reality of my inner feelings. I may be trans, but people didn’t believe me because of my craft. In order to prove to others that I was “legitimately female,” I had to change much of who I was and what I did. I didn’t pick up a hammer again for four years.

All of the depictions of blacksmiths around me were male. Video games and books all featured bearded muscly men in forges. When I read about blacksmithing as a kid, it was by male authors writing for a male audience. Now, after transitioning, I get surprised looks whenever I tell people that I am a blacksmith. They seem dumbfounded that a chipper little five foot five girl could swing a sledgehammer. The image of blacksmiths has been so uniformly defined as male by video games and fantasy movies that we’ve lost sight of the historical reality of that profession. 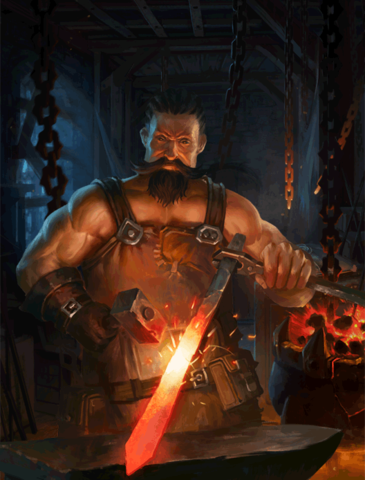 Beard, large muscles, terrible blacksmithing technique. This man is two seconds away from a third degree burn.
Via war-of-the-fallen.wikia.com

Contrary to popular belief, women in Europe and North America have been documented as smiths of all kinds for at least the last 800 years. Whenever I bring the subject up, someone historically informed person says “but guilds wouldn’t have allowed women to be blacksmiths!” In fact, women and girls as far back as the 14th century have been granted entry through paternity, marriage or an apprenticeship. An able body in a business was an able body, regardless of sex. Many women became so enmeshed in their husband or father’s businesses as to inherit them or be able to take over the work.

The Holkham Bible is full of illustrations of the working classes of 14th Century England. The pictures range from carpenters to midwives to smiths to naked baby Jesus sliding down a sunbeam. One of the most well known of these pictures shows a large nosed woman, the wife of the nearby blacksmith, forging a nail at the anvil. Her husband, meanwhile, cannot work because his hand is all pustule-ridden and gross. Either he burned himself or he had the plague. 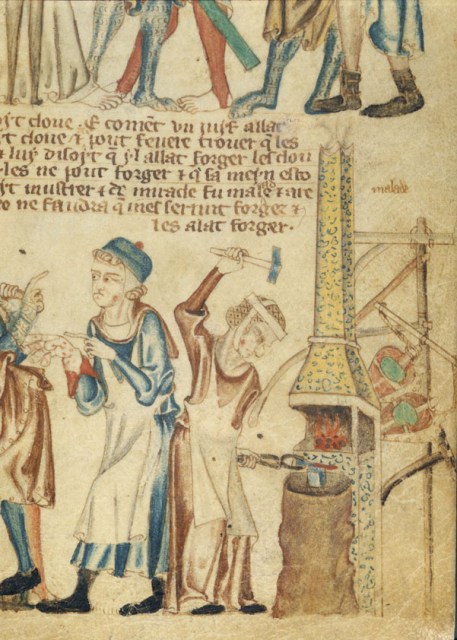 A woodcut from Flanders in the 1300s portrays a master armourer and his two apprentices at work. In the background, a woman tends hot irons in the fire. This image illustrates that women, while not always master smiths, were often an integral part of European metalworking. 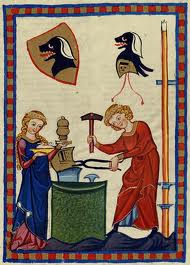 Despite sexist reimaginings and the rampant sexism of the age, medieval records list women as laborers in all trades, from cathedral builders to wool merchants. The 1434 Charter of the Worshipful Company of Blacksmiths, the most important metalworking guild in London, even lists two “sistren” alongside its sixty-five “brethren.” While we do not know the identities of these women smiths, their existence in such an organization was significant enough to be noted.

Girls were not restricted to learning trades through men, though. Ample documentation exists of girls being apprenticed to all manner of craftsmen throughout the middle ages. Such women were free to practice their crafts upon completion of their indenture, often taking girls in as apprentices.

While apprenticeships are no longer the standard, I have ended up working for and with several older smiths, learning from them as I went. My first instructor and mentor, Burton Sargent, was the blacksmith as the historical reenactment village in Salem, Massachusetts. We worked in a blacksmith’s shop with the same tools available to colonial smiths in the late 16th and early 17th centuries. While his tattoos of toucans and mandalas weren’t exactly period, his methods certainly were. Pumping the massive bellows by hand and swinging the heavy hammers were grueling tasks. Any apprentice, boy or girl, would have been exhausted at the end of the day. 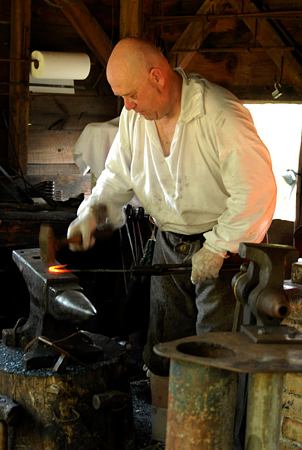 Burt in the Salem Preservation Newsletter, August 2007 Photo by Rex Passion
Via salempreservation.org

By the 18th century, the place of independent craftswomen was enshrined in London custom:

“Married women who practice certain crafts in the city alone and without their husbands, may take girls as apprentices to serve them and learn their trade, and these apprentices shall be bound by their indentures of apprenticeship to both husband and wife, to learn the wife’s trade as is aforesaid, and such indentures shall be enrolled as well for women as for men.”

One of my favorite documentations of women in 18th century forges comes from the English writer William Hutton. In his record of a visit to the town of Birmingham in 1741, he writes, “In some of [the blacksmithing shops] I observed one or more females, stripped of their upper garments, and not overcharged of the lower, wielding the hammer with all the grace of the sex. The beauties of their faces were rather eclipsed by the smut of the anvil.”

While Hutton was taken aback by their appearance (it sounds pretty hot to me), women as nail makers were very common in smithing towns like Birmingham. 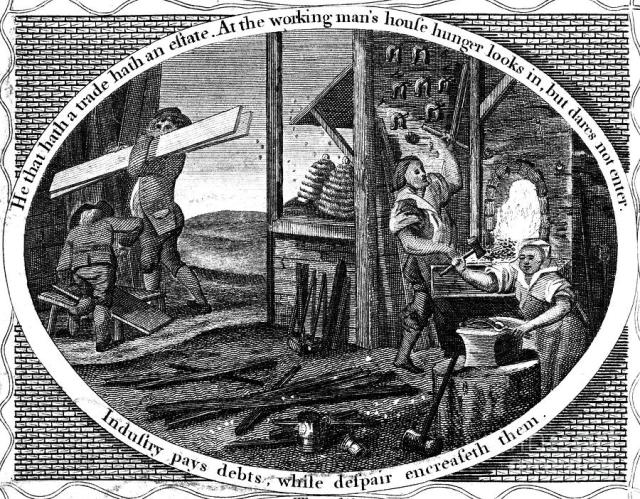 A woman blacksmith from Poor Richard’s Almanac.
Via images.fineartamerica.com

One of the most famous female blacksmiths in US history lived around this time. Betsy Hager was orphaned at the age of nine, and sold into bondage to a Boston farmer in 1779. As she grew she earned herself the nickname “Handy Betty” because she could make or fix absolutely anything.

During the Revolutionary War, she threw herself into the fight for independence by working with blacksmith Samuel Leverett. Together these two badasses secretly used their skills to rebuild and refurbish antique muskets and rifles for use by American soldiers. Betsy even repaired six abandoned British cannons after the Battle of Concord.

Blacksmithing partnerships aren’t always as heroic as Betsy and Samuel’s. At one point during my career, I worked for another blacksmith and welder, cleaning the studio and doing production forging. While I was grateful for the experience, and learned much in his studio, the realities of being a physically small transgender woman were problematic. Short and shark-eyed, with a frightening ability to make anything seem reasonable, my boss went from taking me under his wing to something more sinister. As I worked, my duties were slowly expanded to include everything from keeping secrets from my fiancé to suffering constant inappropriate comments on my appearance. I was there to be his “hot little girl assistant,” and he seldom let me forget it. My being trans was, for him, a secret that he could keep, giving him some measure of power over me. Most of my non-forging duties around the shop, and occasional frighteningly large gifts, were prefaced by a whispered, “Don’t tell Sarah!” None of this sat well with my fiancée or me, and when it became clear that he was currently on parole for murder, I left the job.

I was extremely lucky to be able to leave, but many women, especially those involved in industrial metalwork, didn’t and don’t have that option. Women in workshops across the west midland of England had to take negligible pay and poor treatment from the 18th through the 20th centuries. By the 1900s women comprised much of the chain making labor in the towns such as Cradley Heath. In 1910, after suffering generations of hardship, the women of the town banded together to campaign for higher wages. The campaign was successful, with the implementation of a minimum wage for women smiths. The chain maker’s strike is still celebrated yearly, and the new regional flag has chains on it. 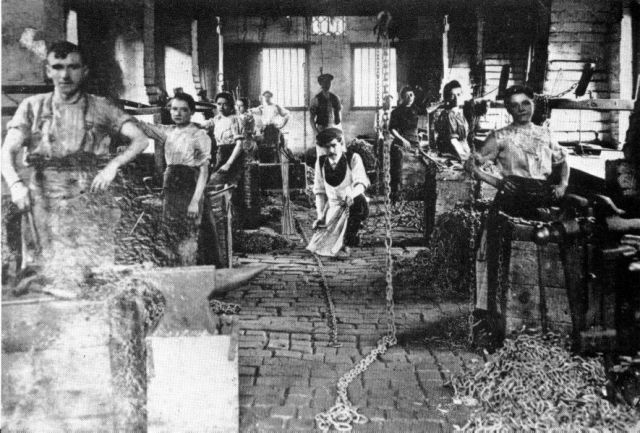 Through the 20th and 21st century, women have become a more and more significant demographic in the blacksmithing community, with artists like Lorelei Sims, Elizabeth Brimm, and Becky Little making amazing contributions to the craft. But despite this, and despite the extensive history of women metalsmiths, the single story of the blacksmith as masculine persists, feeding into the gendering of workplaces and professions. Women metalworkers, construction workers, programmers and engineers have always existed, and our existence should not be a surprise.

It was really because of this that I downplayed my blacksmithing history for years. I studied glassblowing, jewelry making, but still I had an innate love of ironwork. I took up the hammer again when my mentor, Burt, got in contact with me. I hadn’t gotten in touch with him out of fear of rejection. But I was surprised and delighted to find him completely overjoyed. He smiled broadly, “Willow now? Wonderful! Wonderful! ” He gave me a massive hug. Somehow, his utter, unquestioning acceptance gave me the courage to return to a craft that I loved, without worry about how I might be seen by others. If he, as a blacksmith, had no trouble with it, then neither did I. Now metalwork, something that used to be a shield and cloak for me to hide behind, has become something that I can love openly and wholeheartedly. Women have been hammering hot iron for centuries, so I can, too.

Willow Zietman is an artist blacksmith from Salem, Massachusetts. She teaches blacksmithing at a nonprofit makerspace, and has her own business, Willow The Wisp Metalwork. She is currently traveling through Southeast Asia on her honeymoon with her wife.

Willow has written 1 article for us.