Well, the Final Fours for both the men’s and women’s tournaments are set.

After Michigan and UCLA gave us one of the best games of the men’s tournament, their Final Four was cemented: Baylor, Houston, Gonzaga and UCLA. Two #1 seeds, a #2 seed and a #11 seed. The tournament’s Cinderella, #11 UCLA, is just the second team to advance from the First 4 game to the Final Four.

On the women’s side, it’s South Carolina, Stanford, Arizona and Connecticut. Three #1 seeds and a three seed. For the first time ever, two black women — South Carolina’s Dawn Staley and Arizona’s Adia Barnes — will lead their teams into battle on women’s basketball’s biggest stage. Staley and Barnes are also the only two former WNBA players to take a team to the Final Four.

We’re still got a few more rounds of voting before we can crown our Final Four but the road starts now. Here’s the way the way our bracket looks, as we head into the second round. 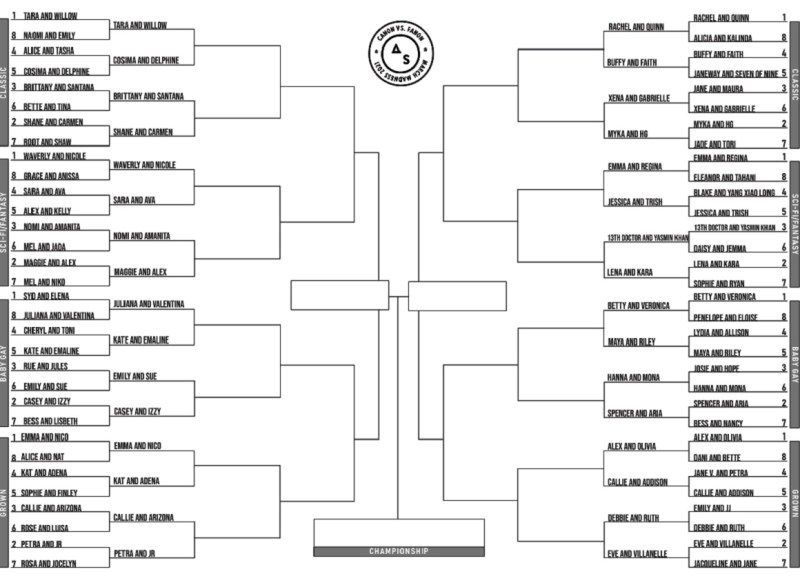 In the Classic sub-region, the top three canon seeds all advanced to next round. I was a bit surprised that, of the three L Word ships featured in that sub-region, only Shane and Carmen survived to Round 2. I thought surely Bettina fans would overrun our poll and move Bette and Tina ahead in the competition…but I guess they’re still smarting over the news that Tina’s married to Rosie O’Donnell now. Though maybe Bette and Tina never really stood a chance because our love for Brittany and Santana is truly eternal. 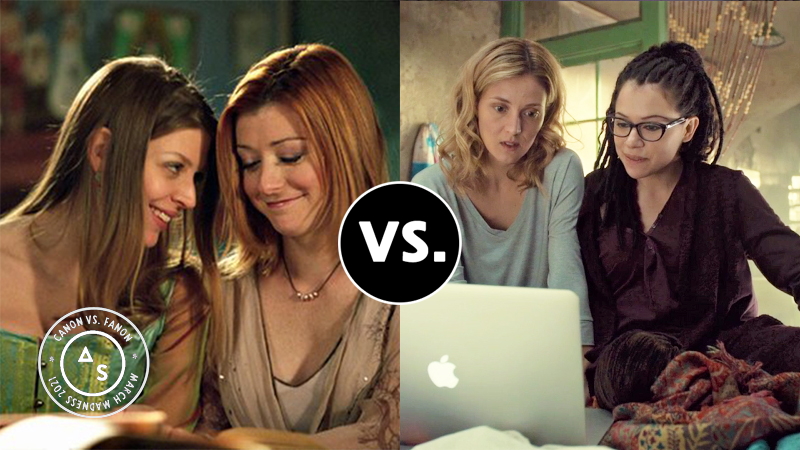 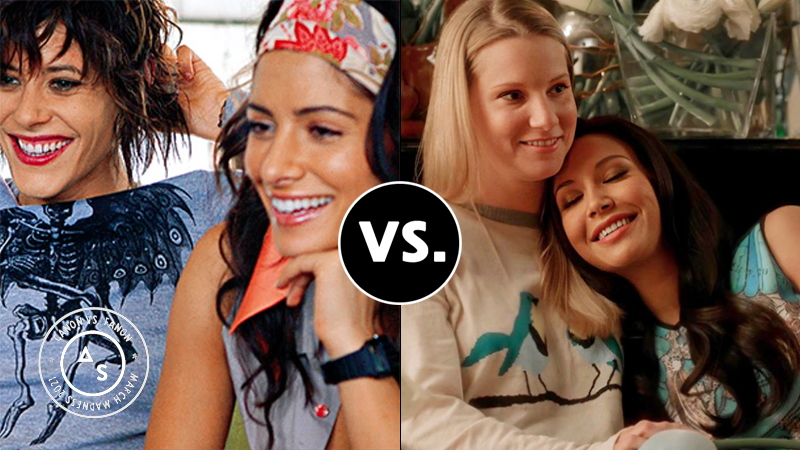 On the fanon side, three of the top four seeds advanced to the second round. There seemed to be some consternation about Xena and Gabrielle being listed as a fanon ship — even after I explained why in my write-up — but that frustration wasn’t enough to keep the couple from advancing to the next round. At this point, all the match-ups are going to be tough but Rachel and Quinn vs. Buffy and Faith? Whew…that’s going to be a battle…I can’t wait to see what happens. 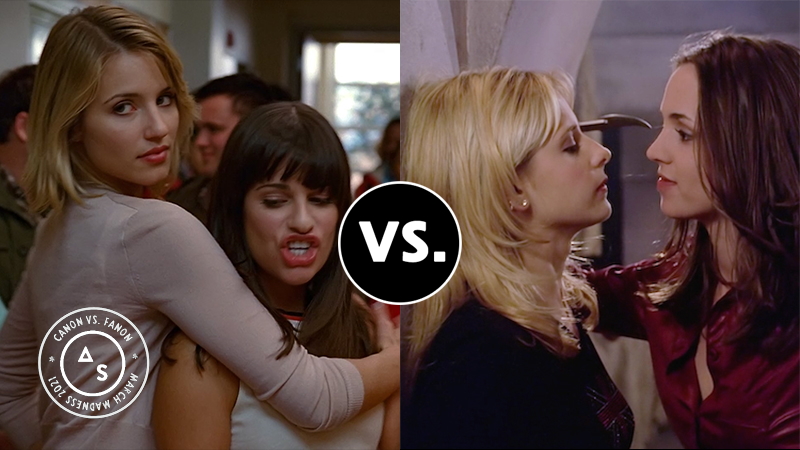 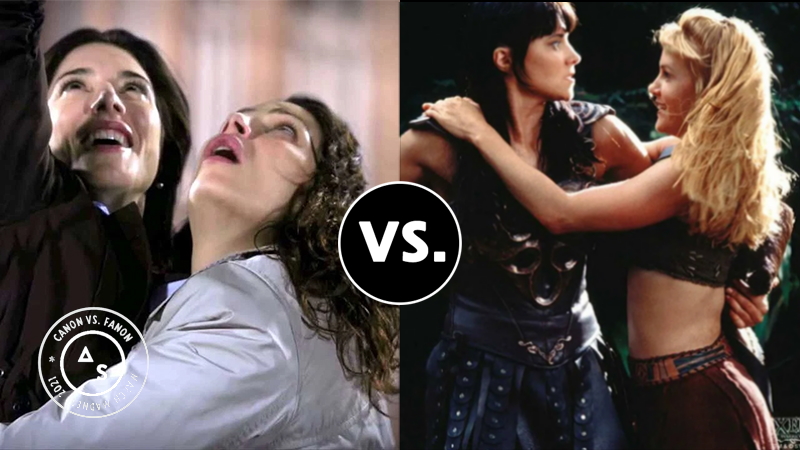 In the Grown sub-region, things on the canon side went all chalk, with the top four seeds all advancing to the second round. I was glad to see that The Bold Type‘s season four butchering of Adena’s character didn’t impact folks’ affection for the pairing. I was surprised that Jane the Virgin fandom only advanced one of its canon couples in the sub-region: I thought for sure that they’d both advance and we’d see Petra and JR vs. Rose and Luisa in the second round. I wasn’t as surprised that neither of the couples from Generation Q advanced…though, I wonder, if Emma and Nico would’ve had more of a challenge if I’d put the throuple (Alice, Nat and Gigi) as the #8 seed instead of just Alice and Nat. 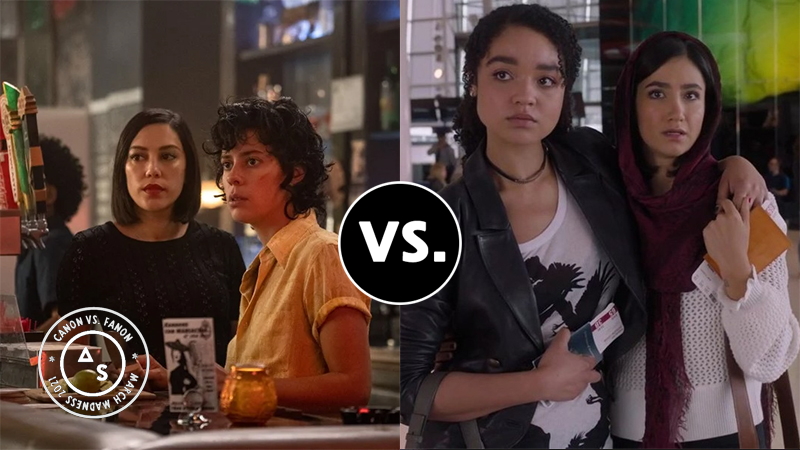 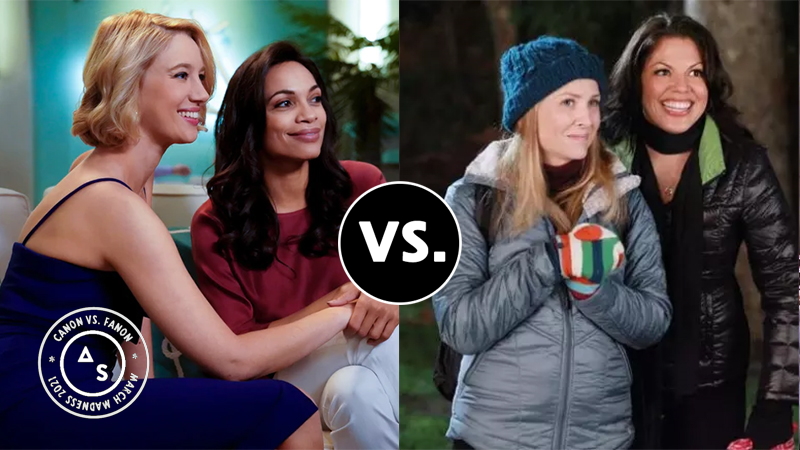 On the fanon side of the bracket, I was surprised to see Callie and Addison best Petra and Jane Villanueva in their first round match-up. Y’all are either very particular about your Jane the Virgin ships or your love for Callie Torres is truly unrelenting. As with Xena in the Classic sub-region, disagreement over whether Eve and Villanelle should be considered canon or fanon didn’t hamper the Killing Eve couple from advancing to the next round. 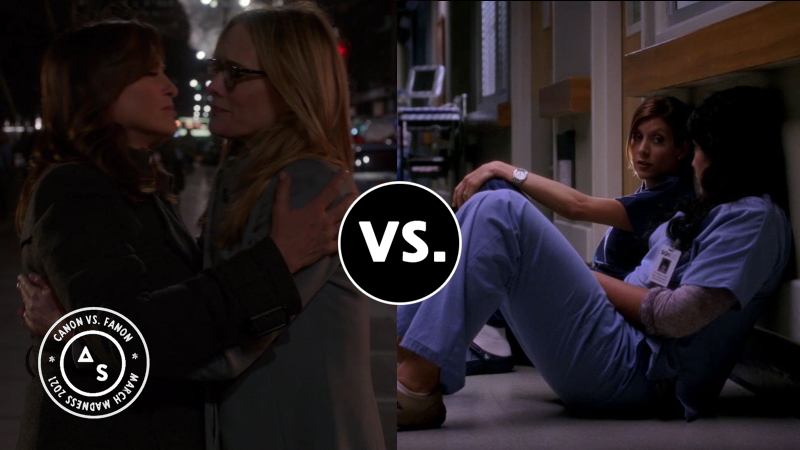 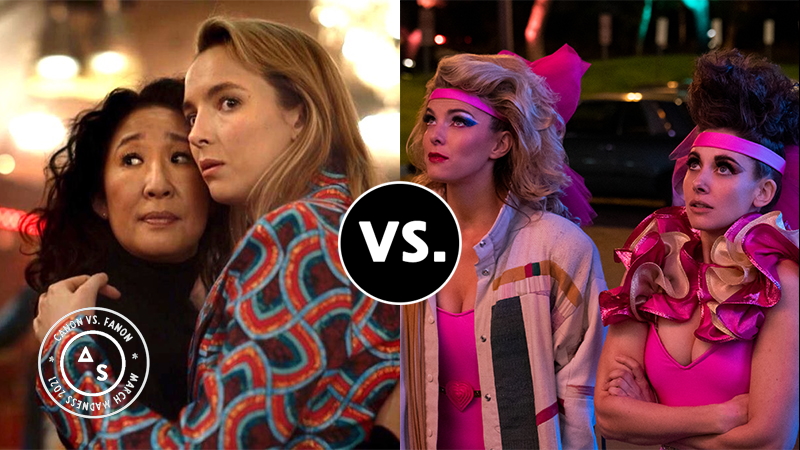 Over in the Baby Gay, Juliana and Valentina’s fandom delivered the biggest upset of the tournament thus far, ousting Elena and Syd from One Day a Time. Coupled with Kate and Emaline’s first round defeat of Cheryl and Toni from Riverdale, our second round will feature a battle between the first two champions of March Madness: Juliana won the Best Coming Out story crown in 2019, while Kate and Emaline won for Best First Kiss in 2018.

Canon: #5. Kate and Emaline – Everything Sucks! vs. #8. Juliana and Valentina – Amar a Muerte 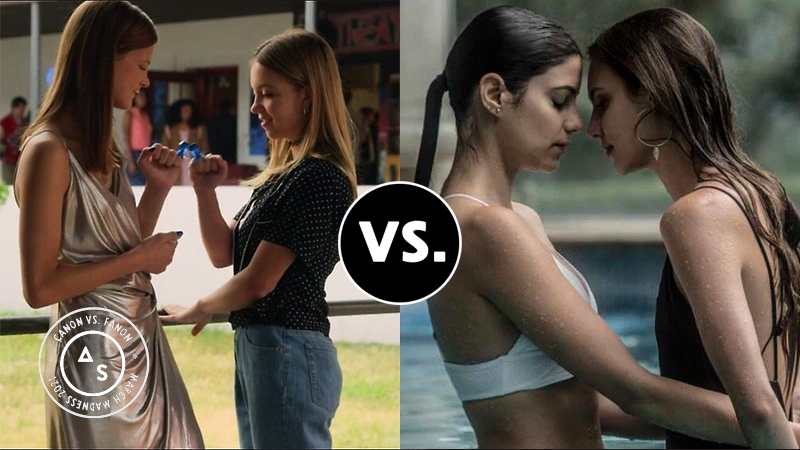 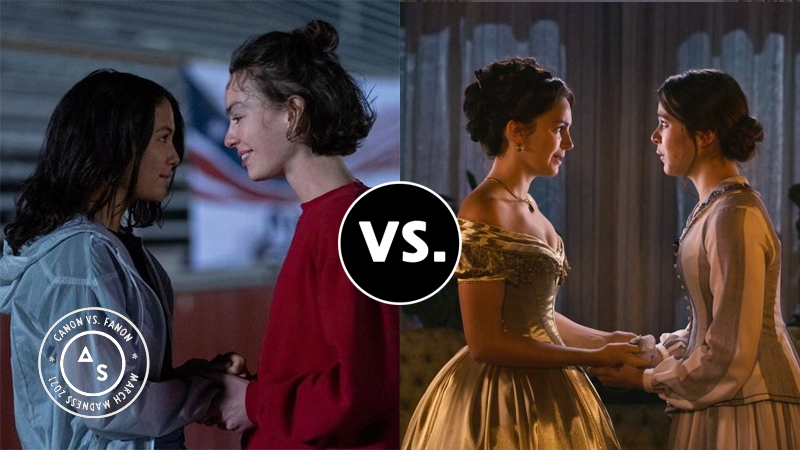 On the fanon side of the bracket, we get a second round match-up between two fanon ships from the same show: Pretty Little Liars‘ Sparia vs. Manna. I’d give the edge to Spencer and Aria based on the first round voting — which, to be clear, I still don’t get — but you can never be sure of anything when Mona’s involved, can you? I’m excited for Girl Meets World‘s opening round success…especially since its one of only a few couples in the field that features an out queer actress. 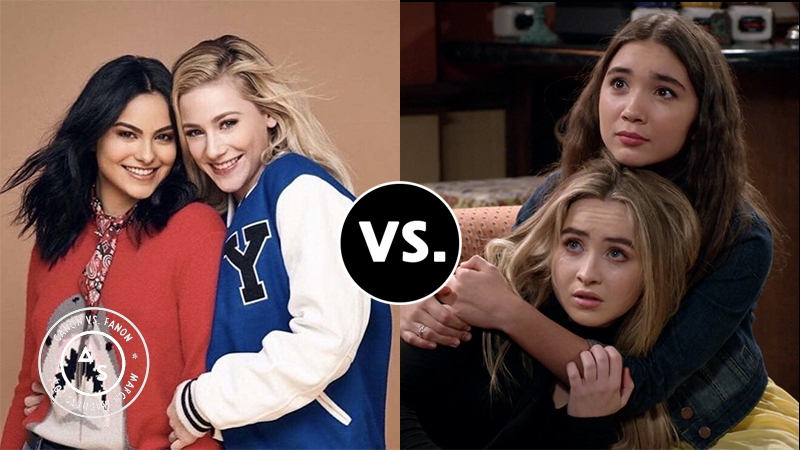 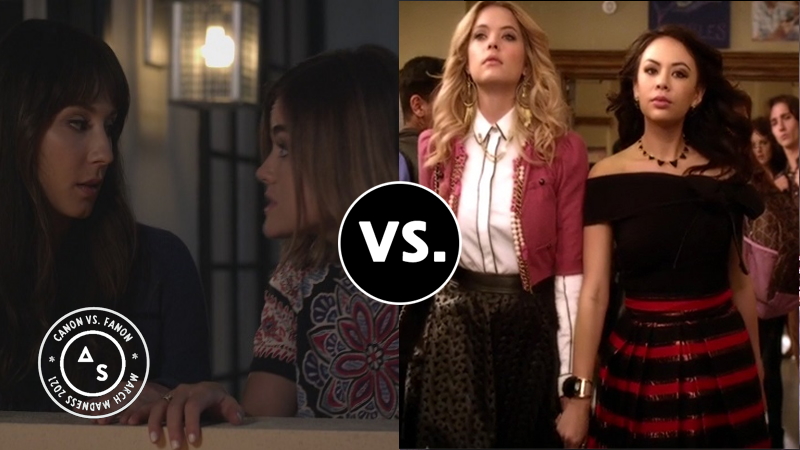 It was all chalk in the Sci-Fi/Fantasy canon sub-region with all the top four seeds advancing. I was a little surprised that Alex and Kelly didn’t get a boost from the return of Supergirl last night but I suppose that folks are loyal to the Sanvers ship. I’d picked Waverly and Nicole to win this canon sub-region, handily, but Maggie and Alex and Nomi and Amanita both put up strong showings in the first round. This sub-region really is a toss-up.

Canon: #1. Waverly and Nicole – Wynonna Earp vs. #4. Sara and Ava – Legends of Tomorrow 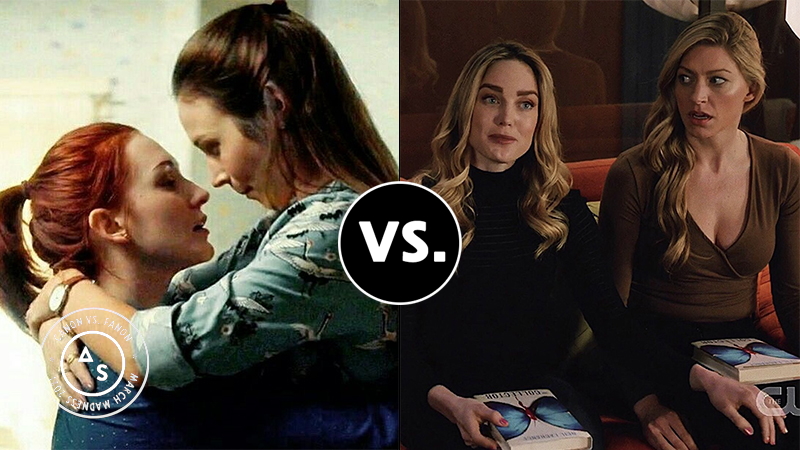 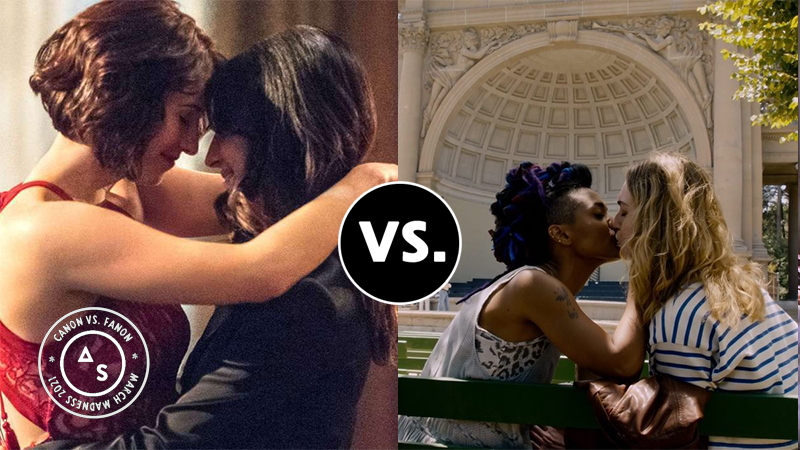 Over on the fanon side, things went about as expected with three of the top four seeds advancing. I wasn’t surprised to see Jessica and Trish advance over the RWBY pairing but if you’re an anime fan, maybe put that web series on your radar. Emma and Regina of Once Upon a Time is a strong #1 seed, producing one of the most lopsided wins of the tournament those far. While I certainly thought Swan Queen was on a collison course with SuperCorp, an underwhelming show by the SuperCorp fandom in Round 1 plus a better than expected showing by Thasmin, have me second-guessing my bracket predictions. 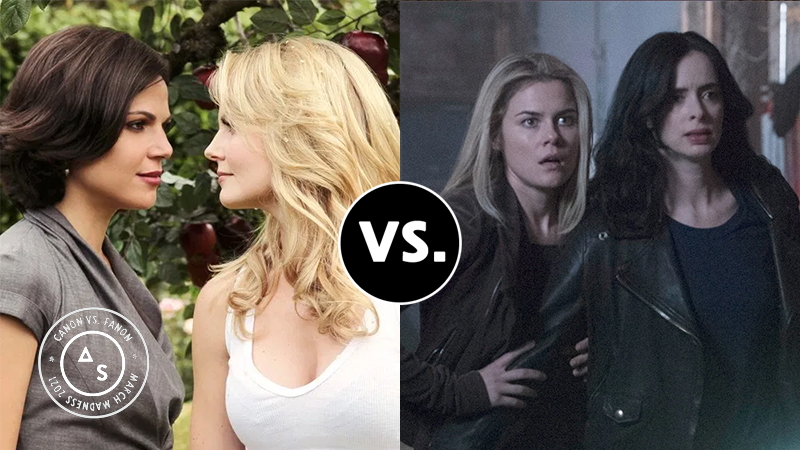 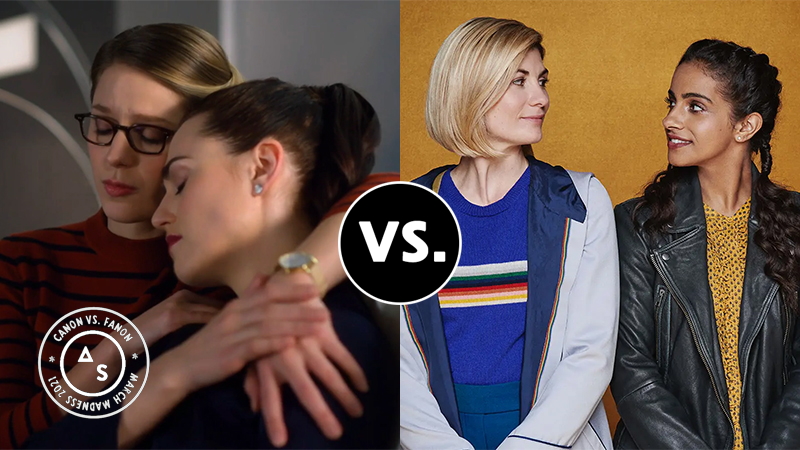 As always, the clock’s set: you’ve got 48 hours to cast your ballot in the second round of March Madness. After that, we’ll tabulate the votes, update the bracket and introduce you to the Sweet 16 on Friday!