On the evening of April the 25th, a flock of exceptionally hot and important queers assembled at the austere House of the Redeemer on the Upper East Side of New York City to celebrate the premiere of Season Two of HBO’s Gentleman Jack, hosted by Human By Orientation. Believe it or not, we were there and in fact had an exceptionally good time, as I’m sure Anne Lister would’ve wanted for us all. 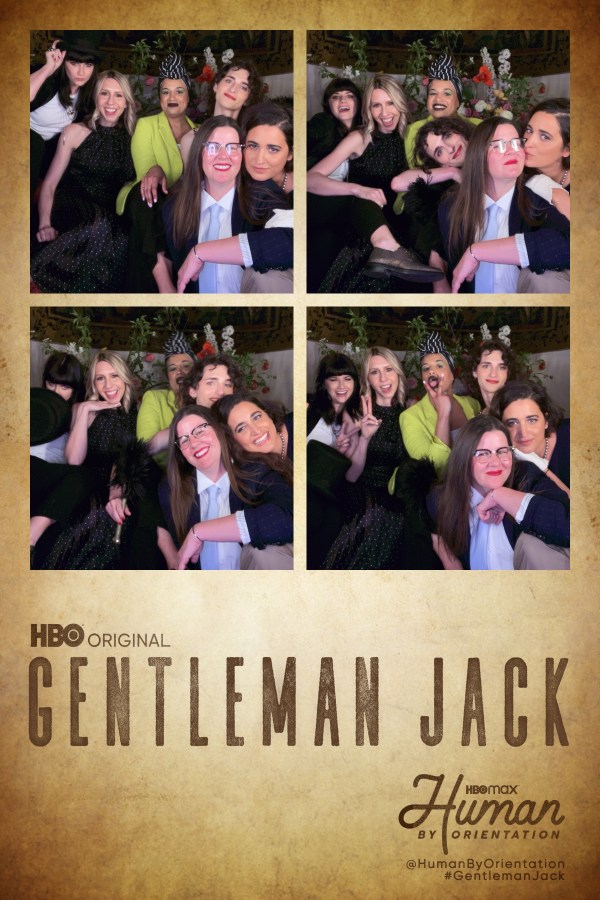 The festivities began when we started getting ready that afternoon but they officially began when we arrived at the House of the Redeemer at 6pm, at which point I took 45 photographs of Autostraddle writer Drew Gregory and her girlfriend, Lesbian Lifetime Christmas Movie legend Elise Bauman, in front of a Volvo that they did not own. This was followed by another photoshoot of the whole gang in front of a noted courtyard. 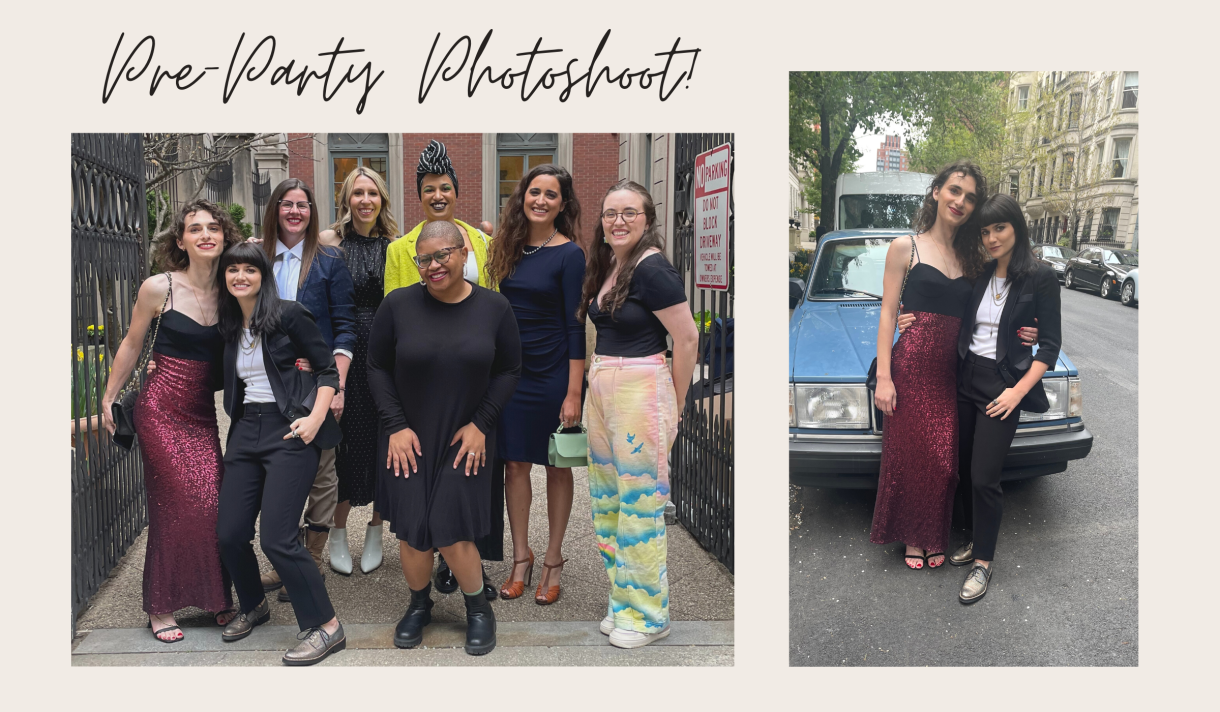 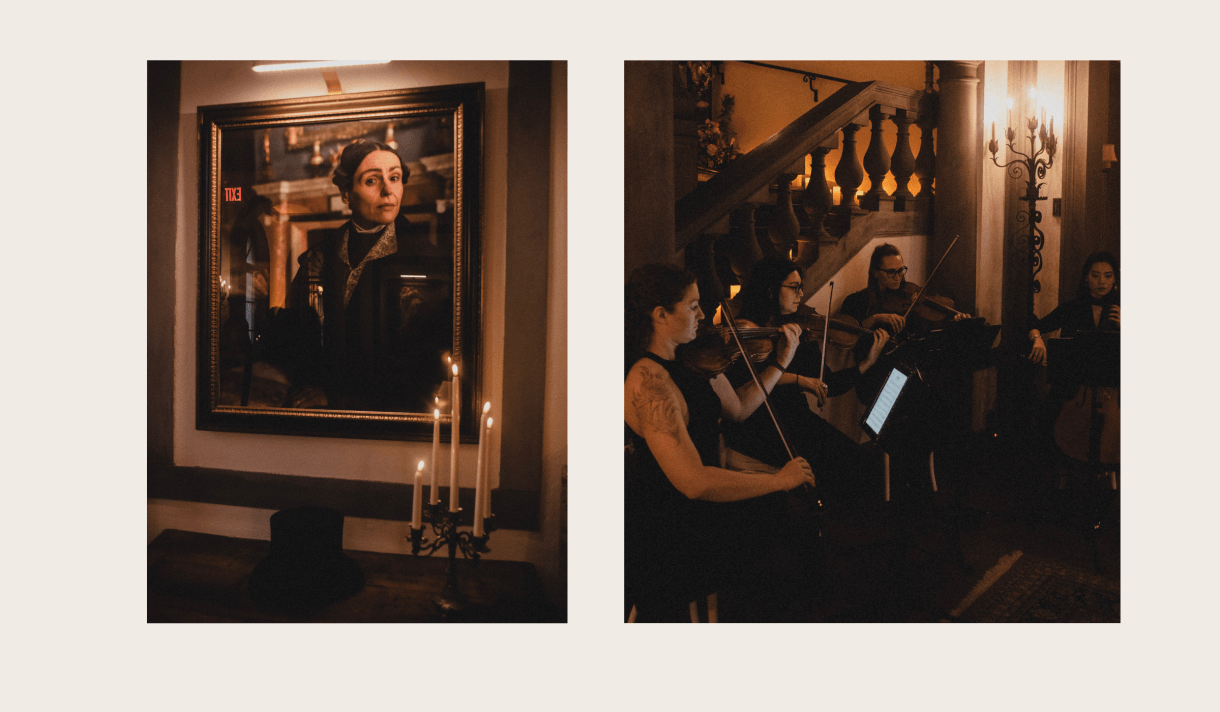 It was clear from the jump that everybody at this party was very cool. 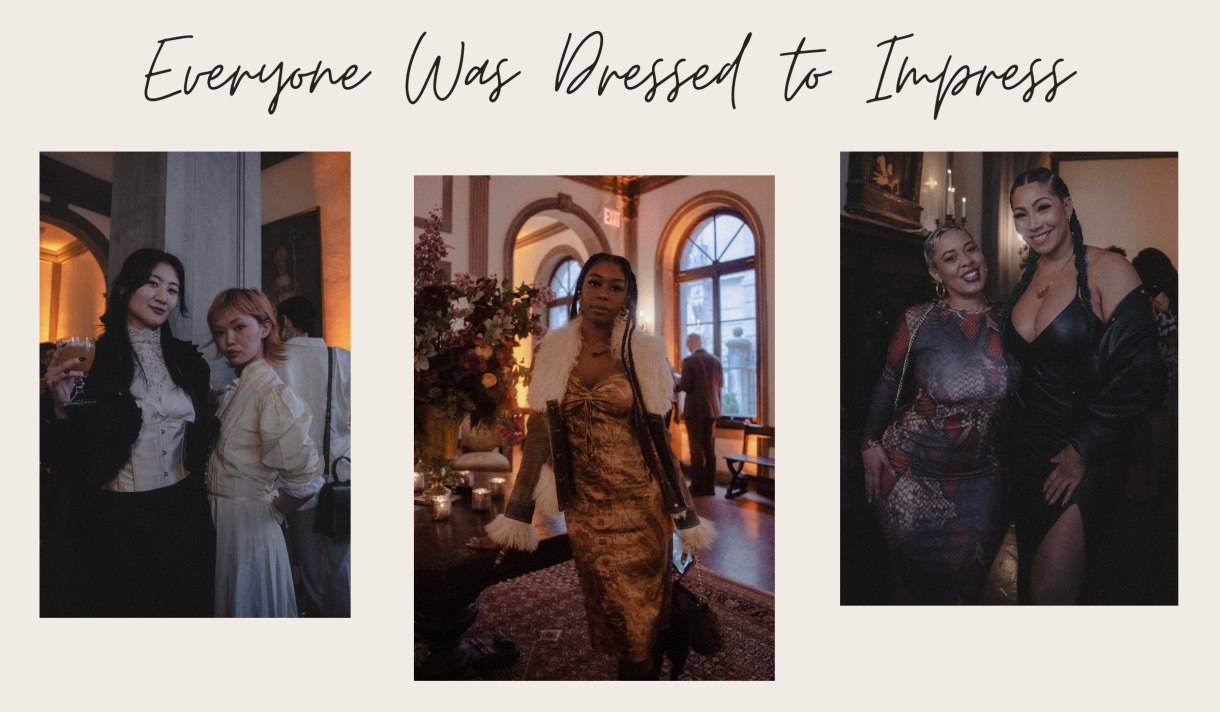 We immediately beelined for the Photobooth, where a plethora of related costume pieces were available for our direct engagement. 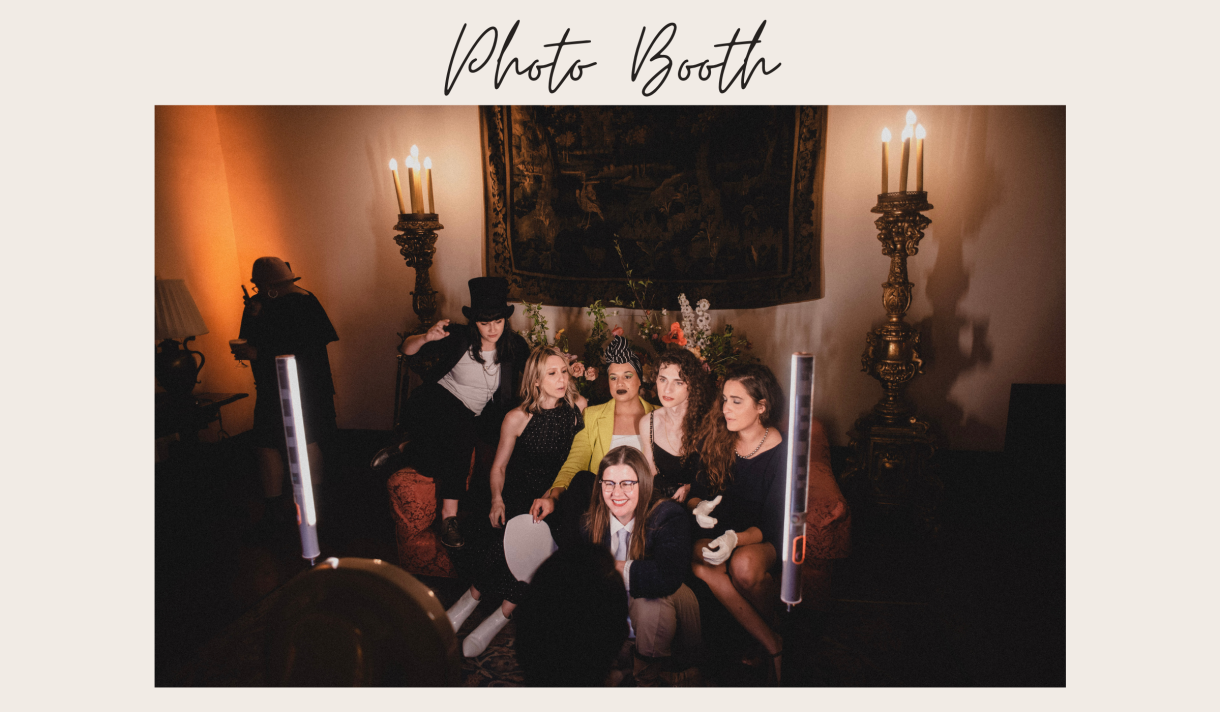 We then traversed a winding stairway, lit with tiny tea lights that none of us knocked over as we ascended into the upper levels of this very cool house! 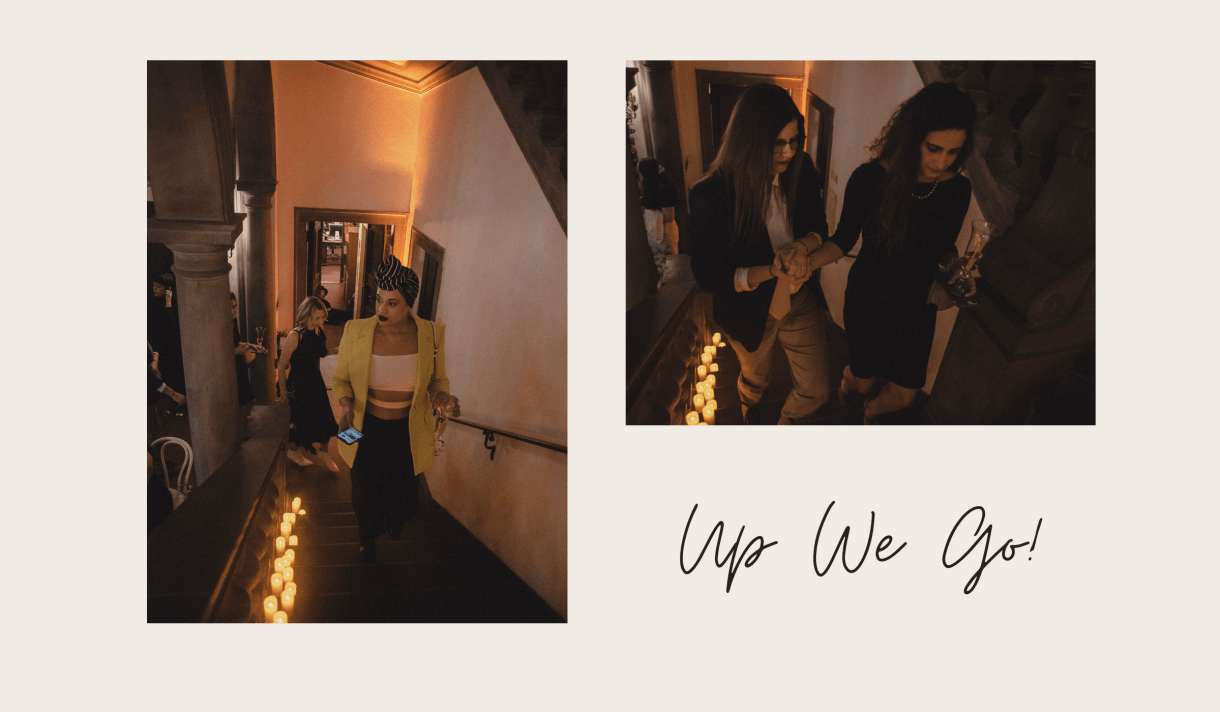 In the upper chambers we found additional mingling, small-plates-consuming and imbibing, and also we waited to have our chance at doing yet more photography in a place my companions assured me had “great light.” They were not wrong! 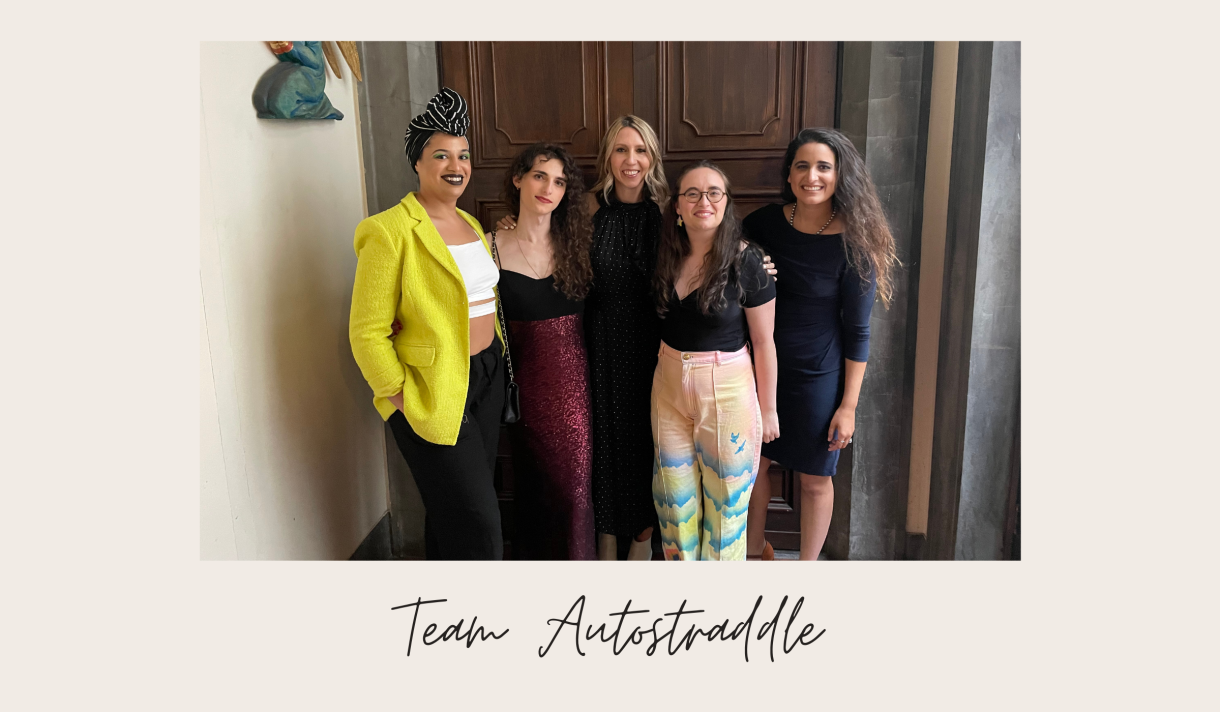 The photoshoot was consequently interrupted by an announcement that the main event — the screening of Gentleman Jack Season Two Episode One — was about to commence, and we filed into a library that I wish was my own personal library in my own personal mansion! 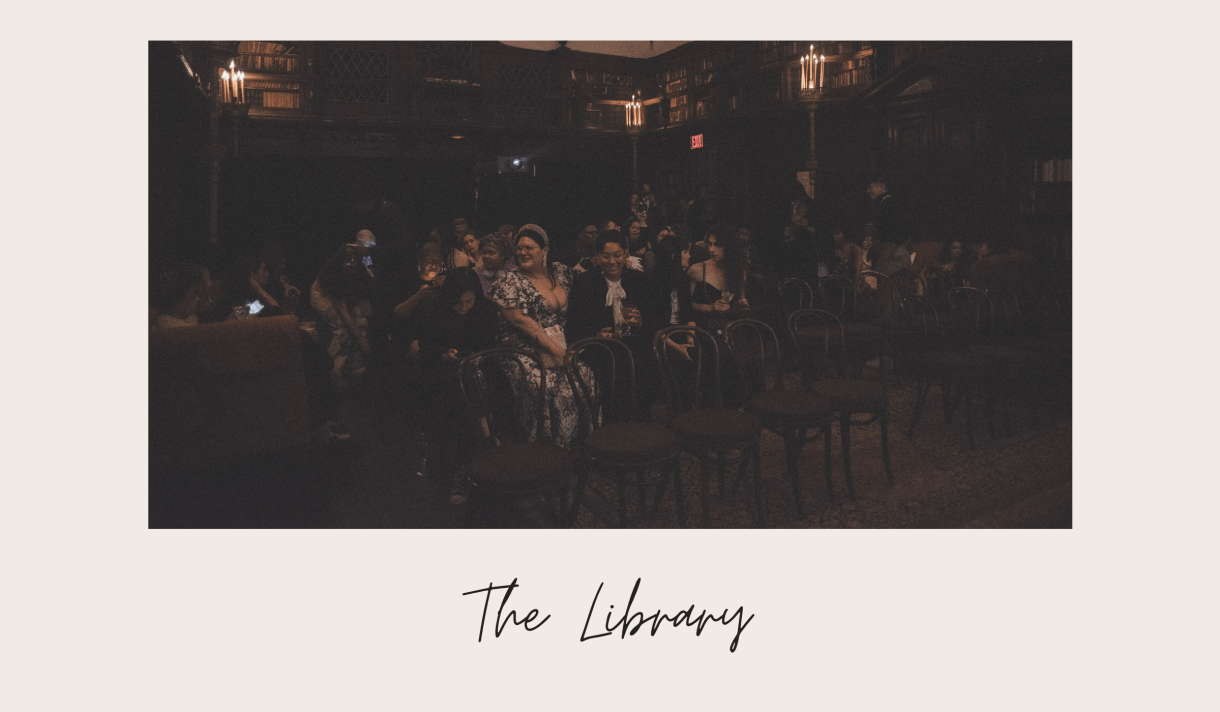 Once seated we got a rousing introduction to Season 2 with our very special screening of the season’s first episode. We celebrated, together, a delightful romp into mid-19th century lesbian courtship and mental health care, conflicts relating to the distribution and alleged theft of coal from land that belonged to Anne Lister, Anne Lister eating a plum while standing on a scenic vista and remembering hot sex with Ann Walker the night prior, the intricacies of purchasing a spry pony and the ethics of solidifying a subversive lesbian “marriage” by including one another’s lands in their will. This has never come up for me personally, but I am happy for them — we all were! 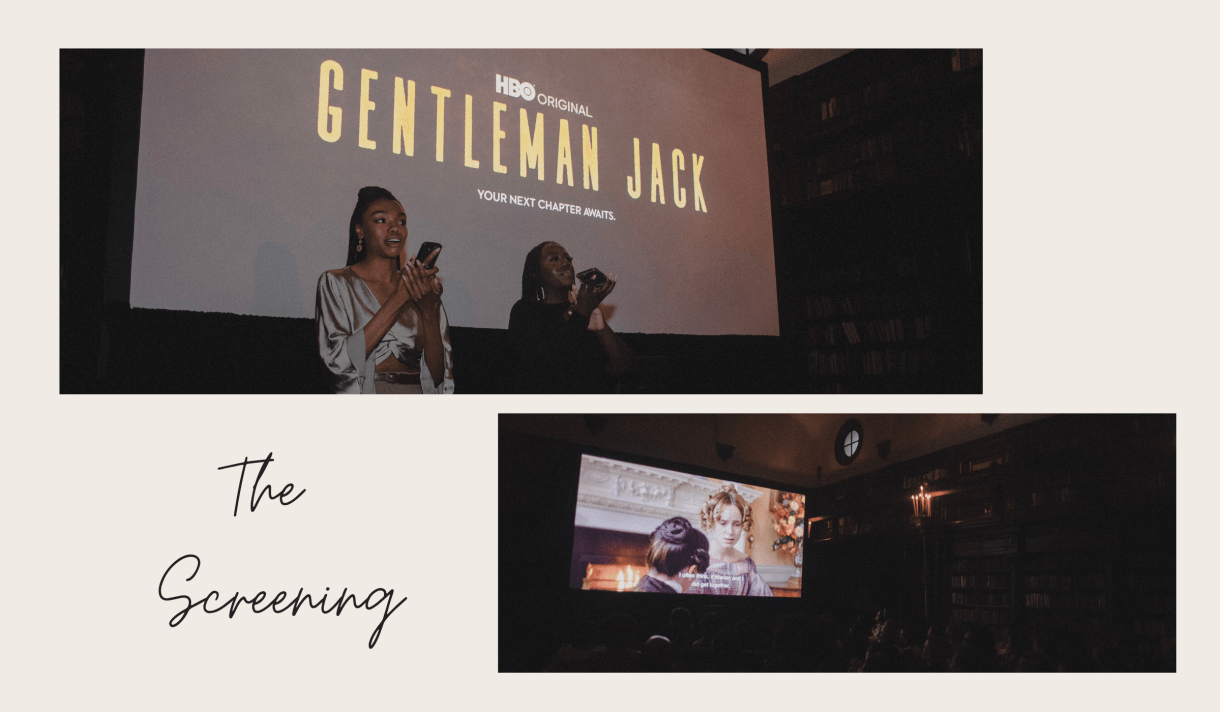 We laughed and clapped and admired Anne Lister’s exceptional fast walking skills and ended the screening in hot anticipation of two things: Season 2 Episode 2 and dinner.

Earlier in the day we’d been playing “who will be at the event tonight” and Christina had wondered aloud, but certainly not in a serious way, “what if Melissa King is making the dinner.” In the past, Christina has shared a number of feelings about Melissa King in her weekly No Filter column on this website, including “I still have a crush on Melissa King!” (September 2020) and “Weird, My Last Name Translates to ‘Wife of Chef Melissa King!'” (October 2021) and “Two Melissa Kings Is a Dream I Once Had and Well – Never Mind!” (November 2021) so imagine all of our surprises, but especially Christina’s surprise, to hear that indeed MELISSA KING WAS MAKING US DINNER. 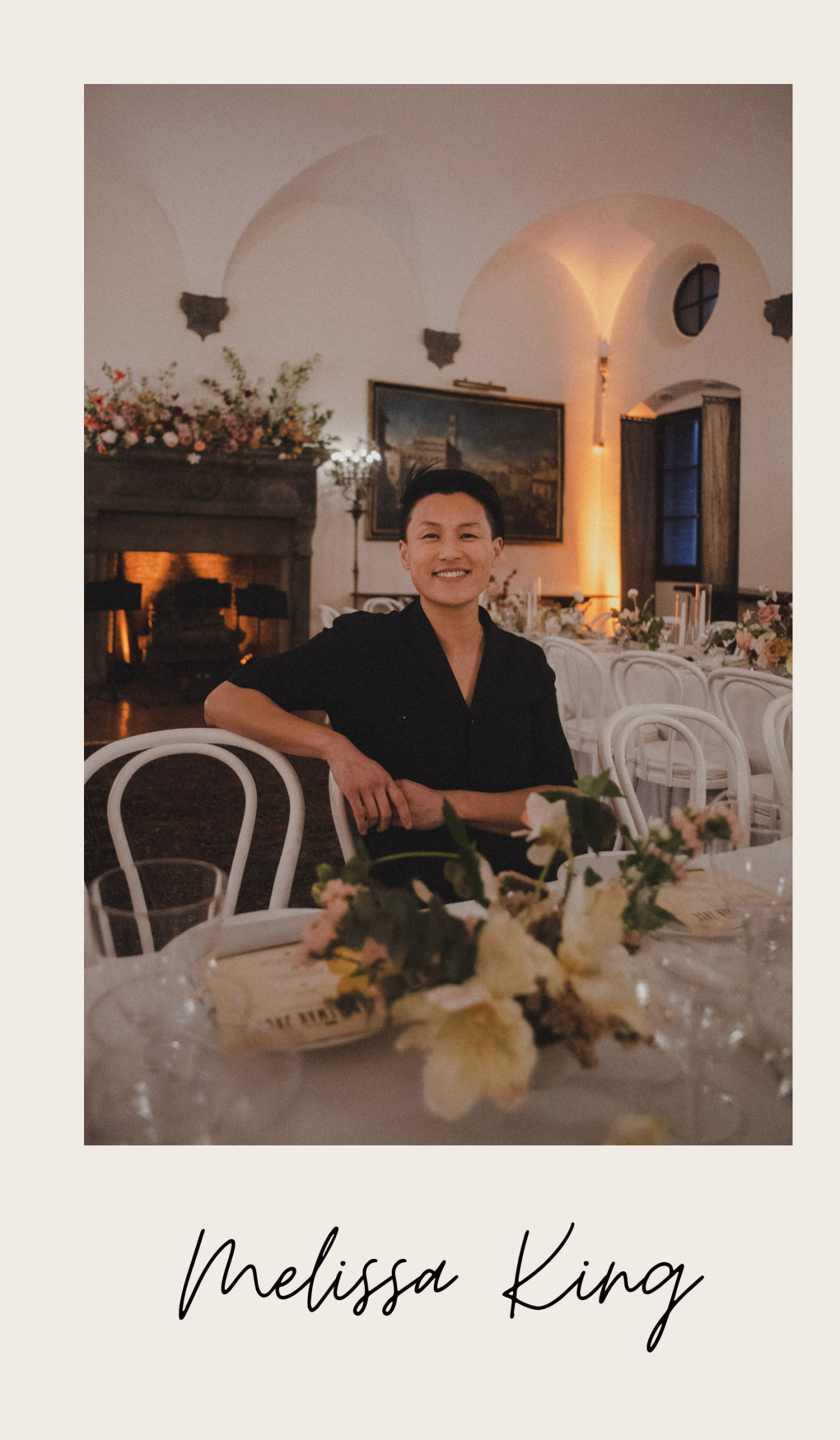 As King later explained in her intro to the meal, after marathoning Season One, she’d prepared a multi-course meal inspired by the program — its love of pea soup, its iconic top hat, its short ribs. 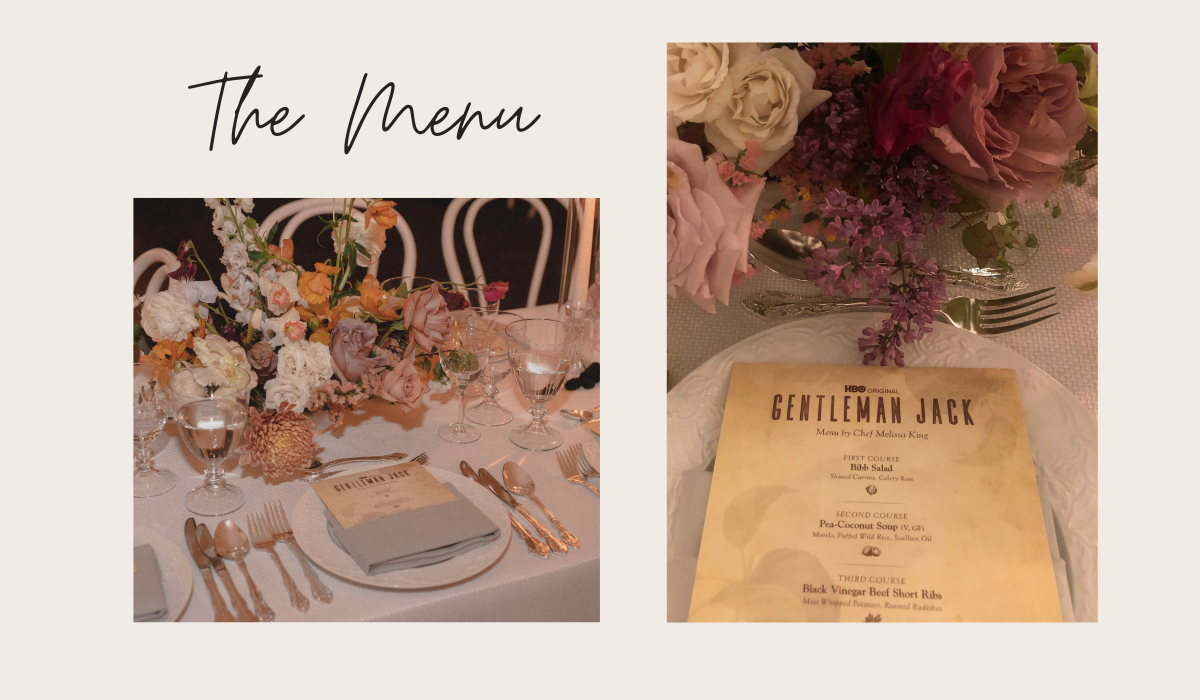 We were READY TO EAT. 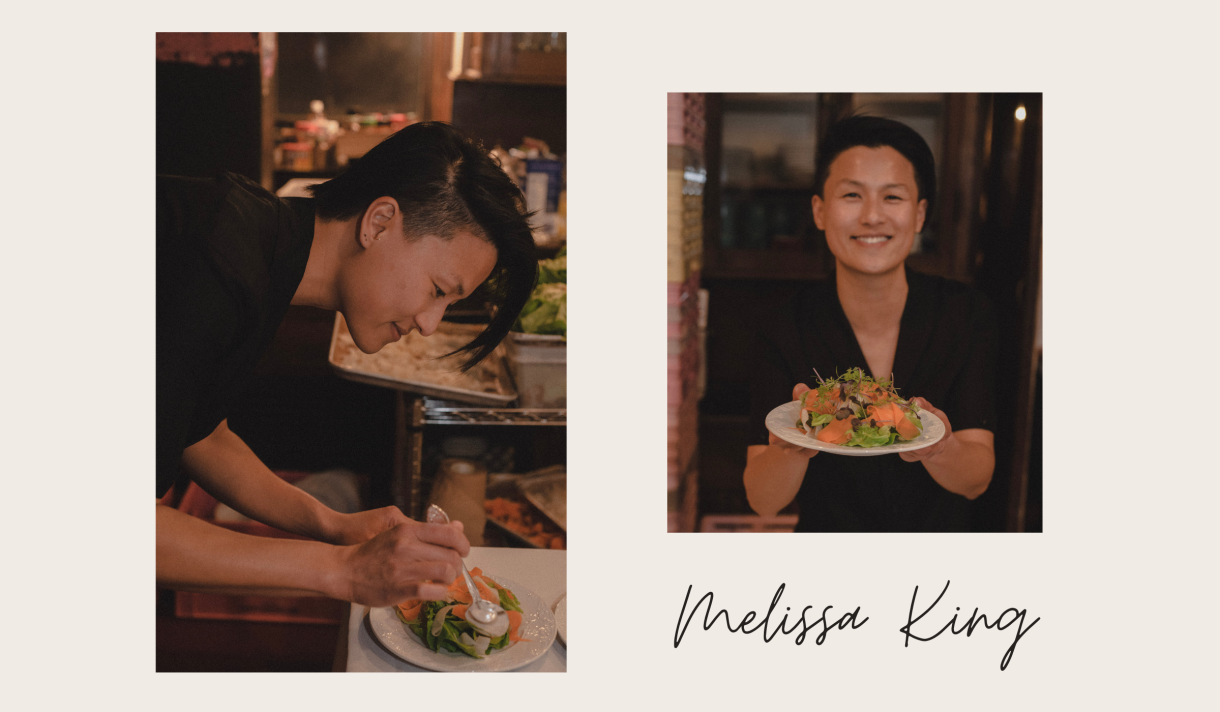 If I could take a moment for this soup??? It was perhaps the best soup I have ever consumed in my life? 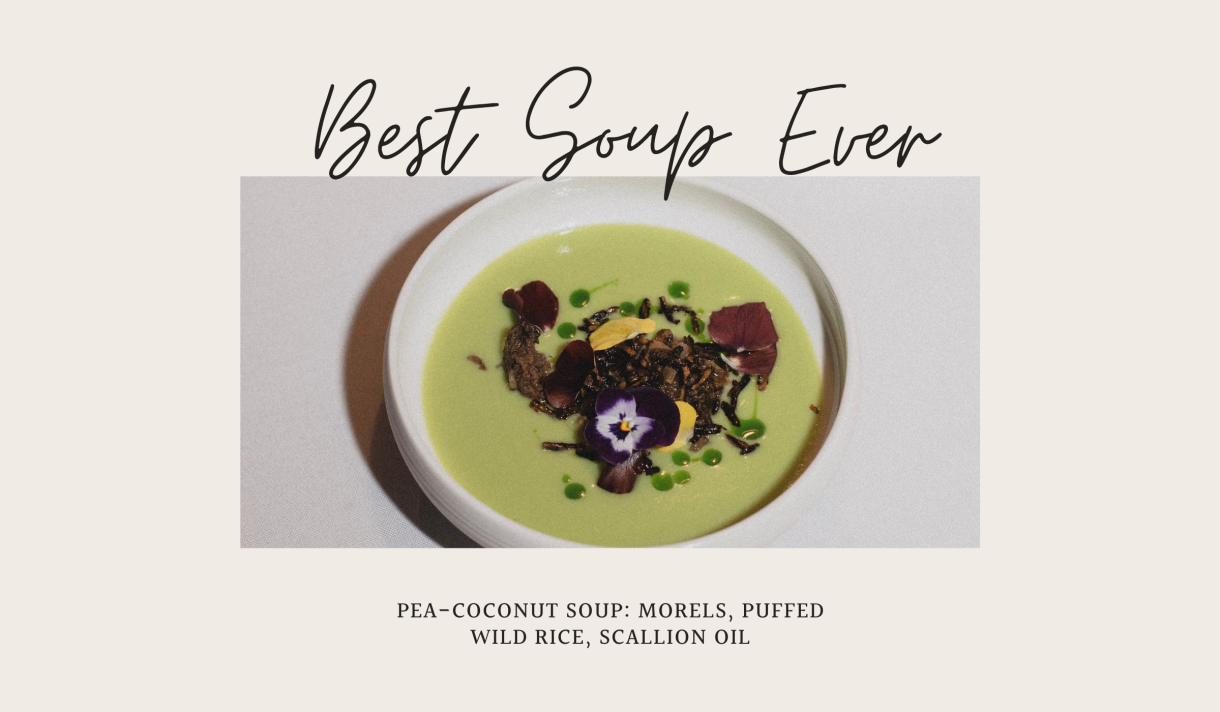 Everybody chatted and laughed and smiled and ate and was gay! 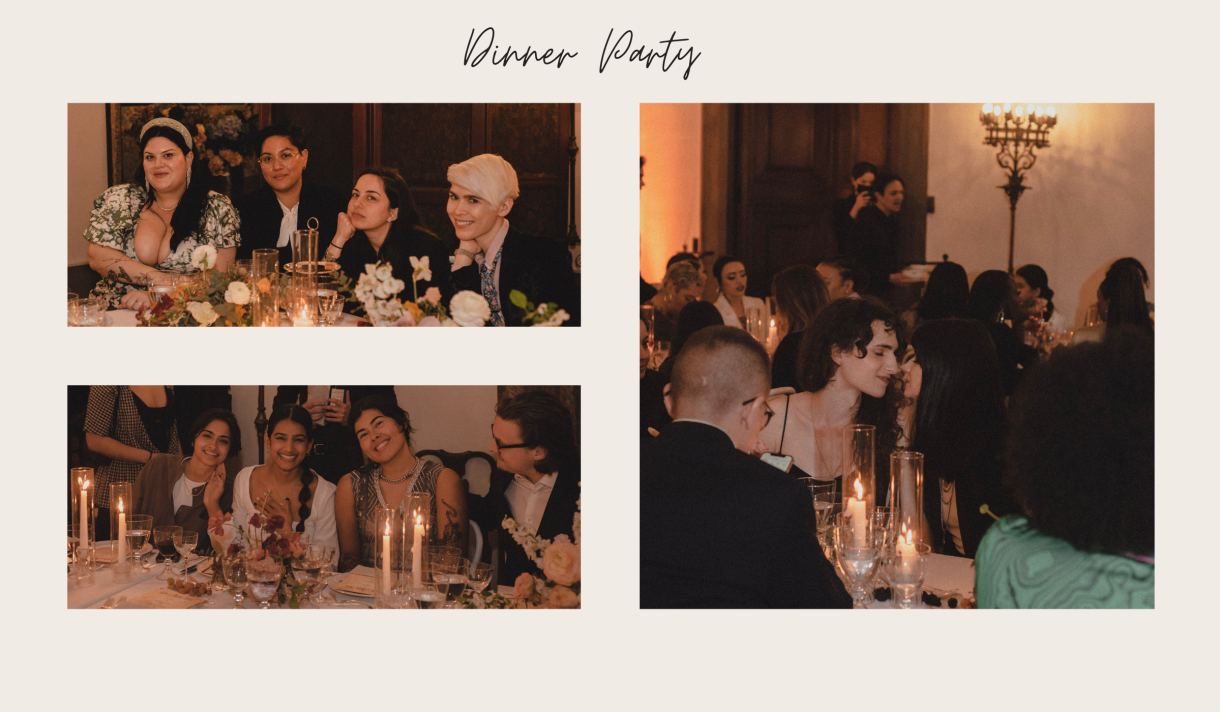 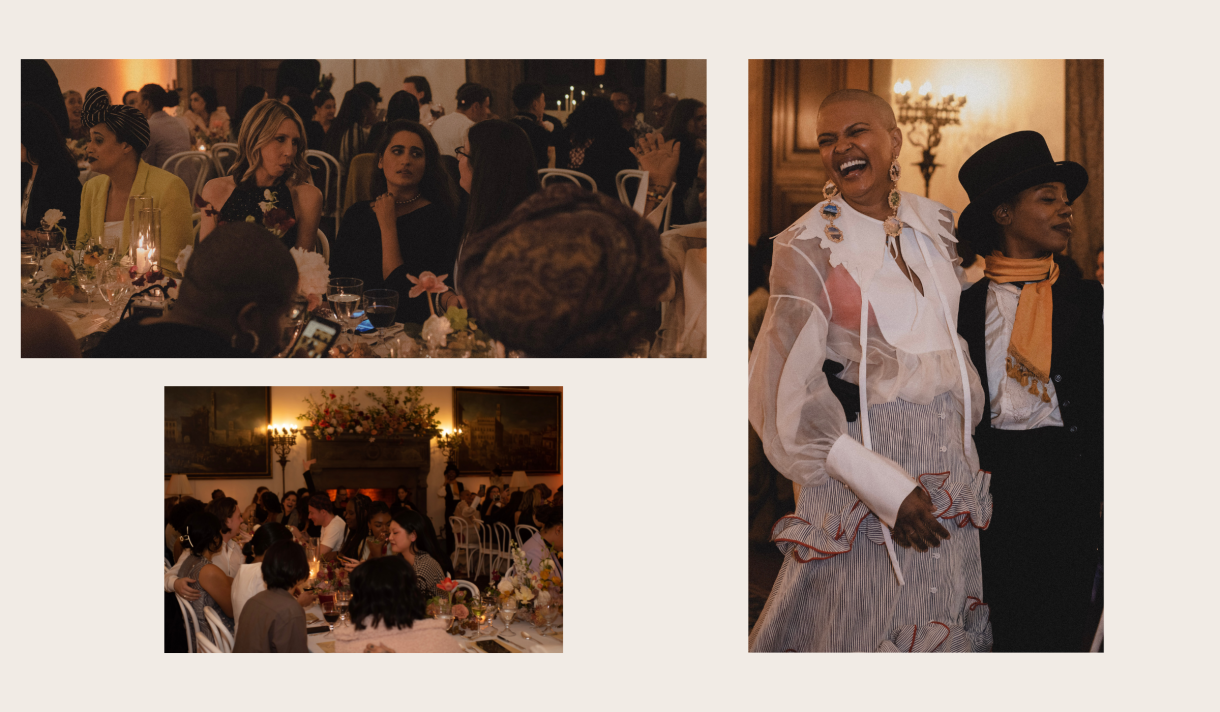 Throughout the meal, in addition to delightful conversation with each other, people we’d just met, and also Cora Harrington (who was in our party but hadn’t arrived yet when we took the group pics, which is too bad because she came in fancy pajamas), we were treated to some delightful gay ballet in period costume: 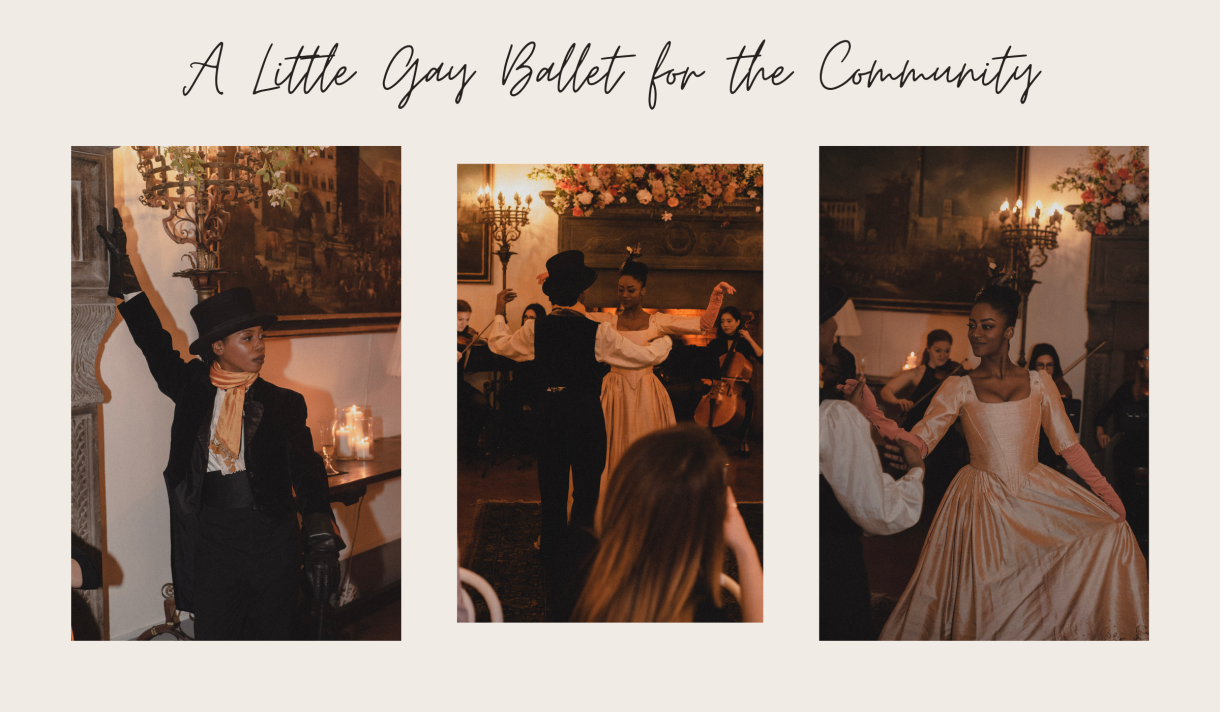 … as well as the ongoing regalement from the quartet, who inspired singalongs when they broke into orchestral arrangements of hits including Britney Spears’ “Toxic” and “Mamma Mia” and Sia’s “Chandelier” and Lil Nas X’s “Montero.” Although I lament not recording these singalongs for posterity, here are more pictures of us at the event! 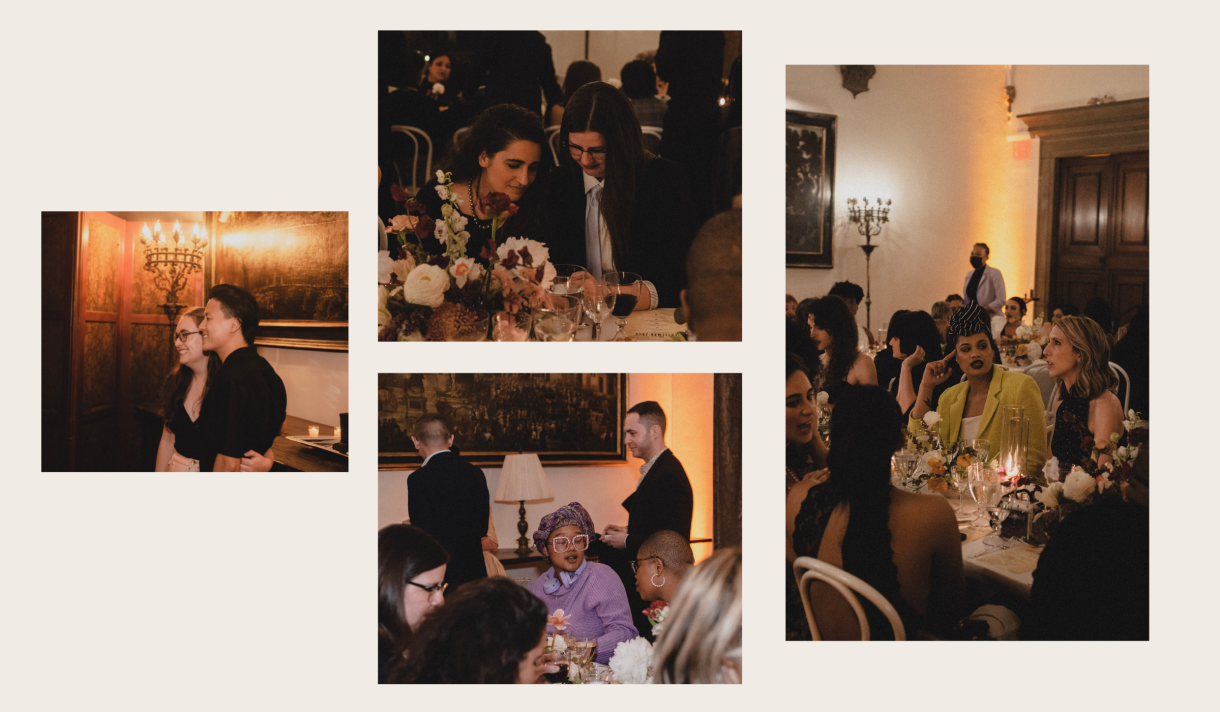 The finale of the meal, a Georgian chocolate cake shaped like a top hat, was the best cake I have ever eaten in my life, and also had the unexpected side effect of turning all of our tongues and teeth blue. We had just discovered this when Melissa King came over to talk to us but I think we all did great considering! 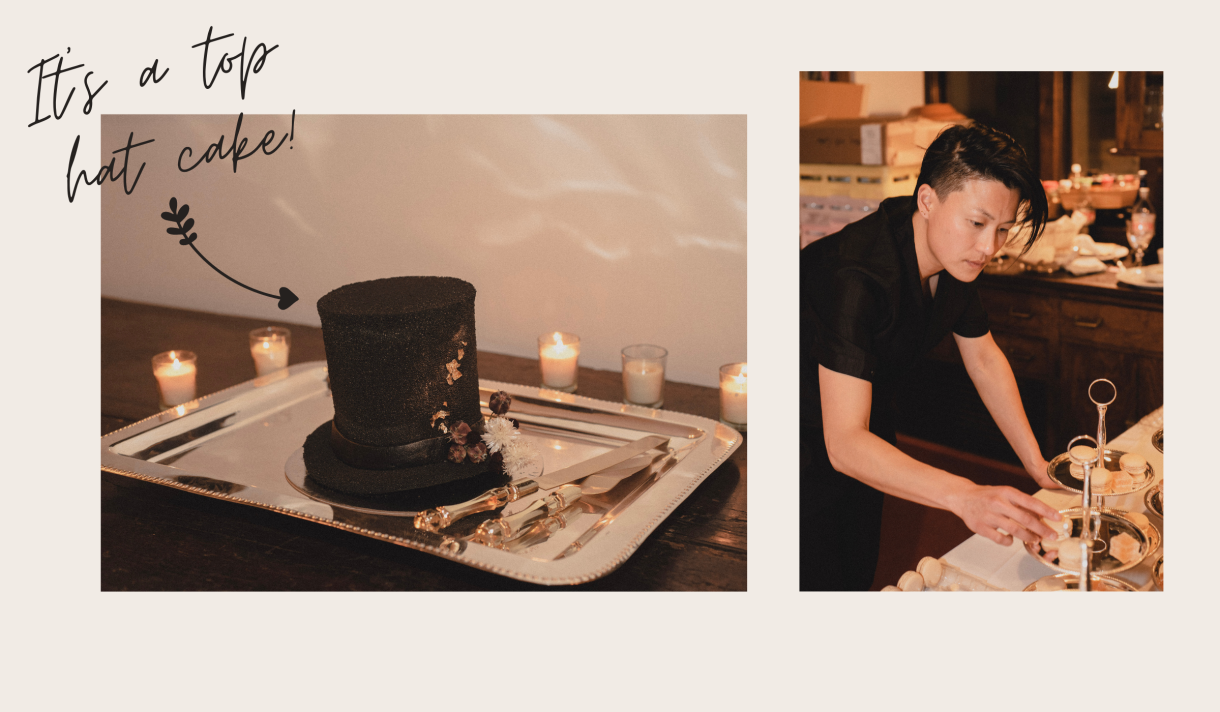 In conclusion, a truly incredible and unforgettable night was had by all, and it was so lovely to be in community with so many cool queer people. I mean, even the florist was queer! 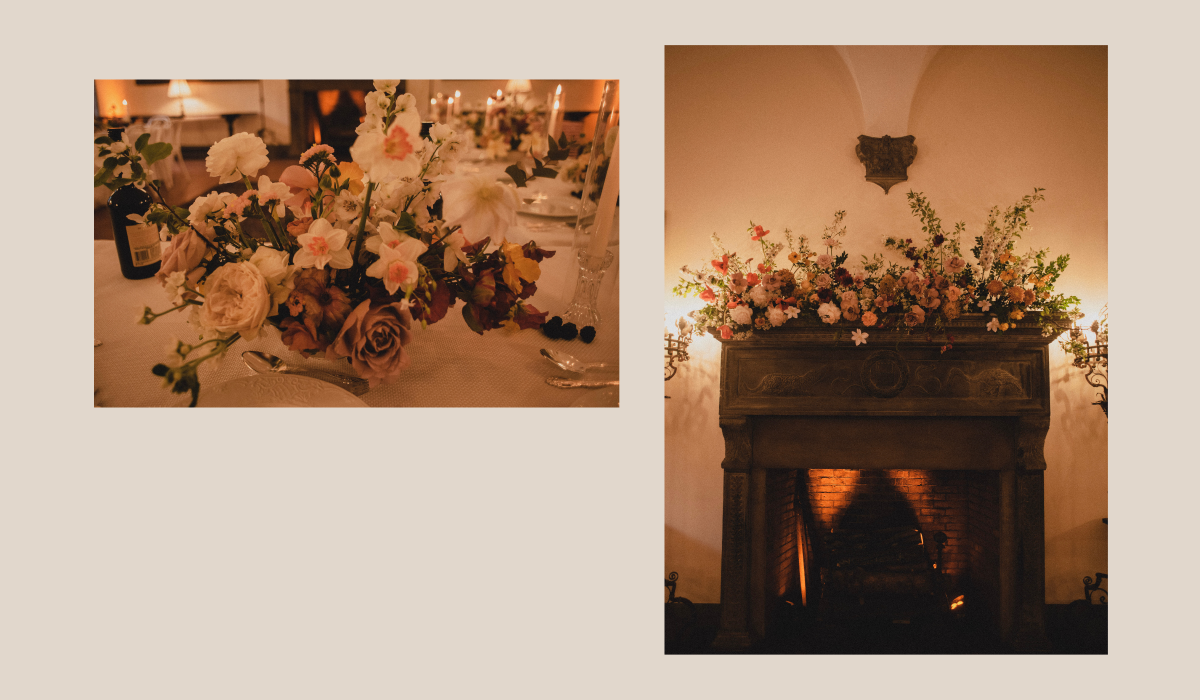 Thank you to Human By Orientation for having us! Everybody really ought to tune in to HBO’s Season 2 of Gentleman Jack, now streaming on HBO Max!