As an avid poetry reader and Eileen Myles enthusiast, it’s kind of a no-brainer for me to take the reins on a poetry activity each time I return to Angelus Oaks for A-Camp. This time around on Mt. Feelings, I’m hosting another Pure Poetry Challenge, in which I make poetry writing even more intense by creating prompts from lines of poems by Pure Poets whom we’ve honored in the past. Oh, yeah, and there’s a time limit. Last time the participants wrote mostly about sex, despite there being a three-minute limit and required excerpts from StaceyAnn Chin involved. Chalk it up to sheer skill, I suppose.

I was excited to review Year of the Mermaid because Ashley Catherine is gifted. I know this mainly because when we met at A-Camp, I was blown away by her skill and bravery in our slam poetry workshop. Gabby, Whitney, and I were supposed to be leading it – but before long Ashley had stolen the spotlight.

Of course, the rest is herstory: Ashley met her girlfriend Marine around the campfire, raised a bunch of dolla dolla bills on IndieGoGo, and took off on the journey of a lifetime, traveling the nation to do spoken word and slam performances and share her gift with as many people as possible. Having read Year of the Mermaid, one thing is very clear: she deserves every second, every book sold, and every bit of support.

Pure Poets are people who make our hearts beat, who bring us closer to light, who deliver us from evil, who save our lives, who remind us we’re not alone, who tell our stories, who do us justice, who survived, who say what we don’t have the courage to let spill from our mouths. I have no doubt Ashley is one of the queer poets who deserves that distinct honor.

I’m gonna light a match
and sit on the lawn
laughin’
and sippin’ Jameson
straight outta the bottle
when the cops
show up.
Don’t try to talk me out of it. 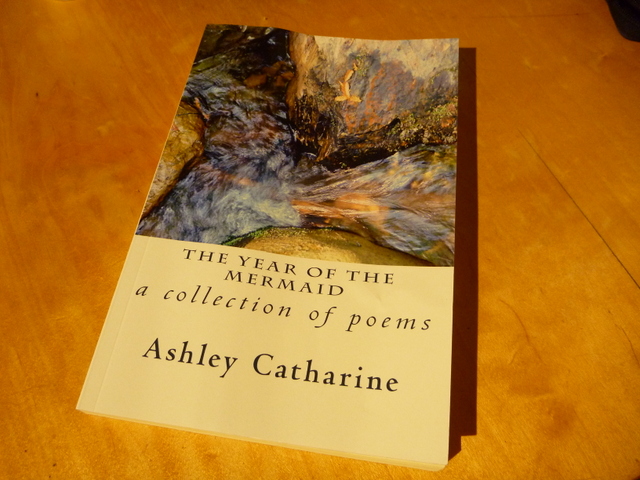 Year of the Mermaid is completely written in your language: poems range in topic from broken hearts to falling – hard, from suicide to birth, from powerlessness to rising above. Ashley digs into meaty stuff: combating the kyriarchy, leaving toxic women behind, thank-you notes to good parents, and conversations with God. Inside the book is Ashley’s story, raw and self-aware and sincere, but inside that is also yours. I was floored by the similarities, by the similarly beating hearts, by the commonality. I was smiling in the corner of my mouth, my eyes were opening really wide, I related so much I read the entire thing on a 1.5 hour flight from Columbus, Ohio to Baltimore, Maryland and I cried a few times but nobody noticed.

The book is amazing. An honorable debut and an astonishing collection of poems that read like stories that are you, and humanity, and making mistakes, and falling in love again. It fell into all of my worlds. It exposed everything.

Ashley Catharine is a queer poet who is loud, proud, unafraid (or maybe just courageous), and unwilling, ultimately, to surrender. I realized reading The Year of the Mermaid that that is inevitably what made the destiny of our meeting so sweet. As you’re reading this, I’m sitting on a mountaintop with 300 queers who feel like home: who look unlike me but have the same soft hearts, who come from different places but know the same words. A-Camp is this kind of place where people like me, and you, and everyone else you’re thinking of right now, find that the only thing better than having your own story is how good it can feel hearing it come out of someone else’s mouth.

Pure poetry is about a connection not only via words but via tugs on your heartstring, bleeding cuts, and experiential parallels. It’s about reading something written in your exact language, and thus knowing that you’re not the only one talking to yourself.

Inside Year of the Mermaid is Ashley’s story. And it’s eerie how similar it sounds to yours.