It’s safe to say that, right now, anxiety ranks pretty high on my list of Emotions Experienced On a Daily Basis. Which is why it was both upsetting and strangely vindicating to hear that psychologists at Michigan State University have found that the brains of women who think of themselves as anxious work harder than those of men or calm women.

In the study, college students were fitted with electrode caps (which sound and look superduper science-y) and asked to perform simple tasks like identifying the middle letter in a series of five letters like FFFFF or EEFEE. After the tests, the participants filled out a questionnaire about how much they worry. Women who identified themselves as anxious performed nearly the same as uptight men on the simple tasks, although their brains worked harder at it. 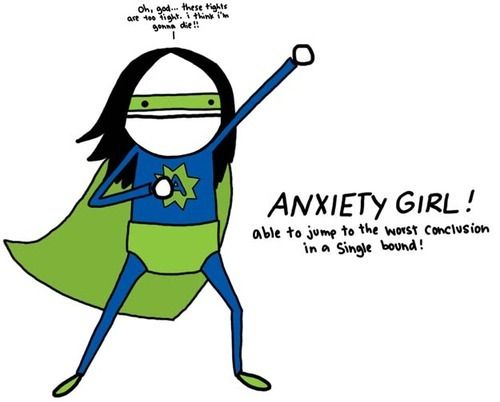 So, my anxious compatriots, in the Highest Brain Activity Olympics, there’s no question about who’s taking home the gold: it’s us. Unfortunately, all that cerebral exercise isn’t necessarily a good thing. When it came to performing more difficult tasks, worrisome women actually scored worse than men. Jason Moser, one of the researchers on the study, says that this can be attributed to the high levels of stress their brains are under. “Anxious girls’ brains have to work harder to perform tasks because they have distracting thoughts and worries. As a result their brains are being kind of burned out by thinking so much.”

The psychologists are now trying to determine if hormones are to blame for the increase brain activity. Estrogen has been linked to dopamine output, which in turn affects learning, mood and attention. They hope that their research will shed some light on why women tend to struggle with anxiety disorders more than men from a biochemical standpoint. Social theorists have hypothesized that women are diagnosed as anxious more frequently than men due to help-seeking habits (women are more likely to consult doctors so, statistically, should be diagnosed more often) or due to learned behaviors from their parents.

Either way, the fact that only women seem to objectively suffer is worth looking into. If women –intelligent, motivated women — are messing up due to anxiety, think about how much we stand to gain if those mistakes could be eliminated. Moser and his colleagues suggest that, in addition to traditional therapies, writing can can help women learn to empty their mind and focus on the task at hand. So get out your journals, tell your brain to chill out, and start living your life.