It wasn’t a big surprise when some anti-gay groups, like NOM and the misleadingly-named New Yorkers for Constitutional Freedoms, sought to oppose marriage equality in New York when it first passed. Apparently uninterested in the irony of the fact that Prop 8 was in fact declared in violation of constitutional values when it had its “day in court,” New Yorks for Constitutional Freedoms claimed that “constitutional liberties were violated,” and filed a lawsuit to that effect. Specifically, they claimed that the process by which the law was brought into effect was against the Open Meetings law of New York. 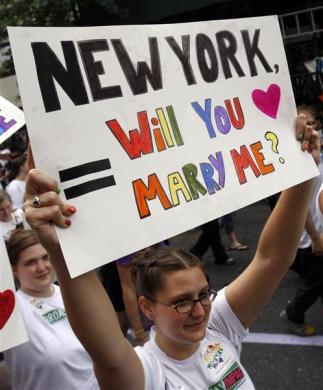 What’s a little more surprising is that their lawsuit is actually being entertained. A New York State Supreme Court justice has decided that the lawsuit will be allowed to proceed, and that its claims that “the Republican senate conference and elected officials including Governor Andrew Cuomo held meetings in violation of the state’s Open Meetings Laws, financial support was promised to win Republican votes, the bill bypassed senate committees, and the governor unjustifiably issued a message of necessity to expedite the vote and avoid the normal three-day waiting period for a bill” will be decided in court. This is a big turnaround from when the lawsuit was originally introduced in July, and a spokesman for the governor declared that “the plaintiffs lack a basic understanding of the laws of the State of New York.” If New Yorkers for Constitutional Freedoms wins their suit, all marriages performed in New York since marriage equality was legalized will become null.

The Open Meetings Law of New York functions to provide the public with access to various meetings of government officials at both the state and local level. The plaintiffs’ allegations include that meetings between Governor Cuomo and the senate Republican caucus should have been subject to public viewing under this law, and their failure to do so constitutes a breach of acceptable protocol for passing legislature.  The Citizen Media Law Project says that the definition “meeting” according to the OML is “the official convening of a public body for the purpose of conducting public business, including the use of videoconferencing for attendance and participation by the members of the public body.” Does the Republican caucus and governor constitute a “public body?” Apparently we’ll find out in court.

Another issue that both New Yorkers for Constitutional Freedoms and the judge who’s allowing this lawsuit to proceed, Judge Robert Wiggins, are concerned with is the fact that Governor Cuomo moved to expedite the vote on marriage equality, bypassing a normally required three-day waiting period. Cuomo’s rush to pass the bill appears to have been based in a genuine desire to give the LGBT community its due; at the time, he “cited the “long overdue” right of same-sex couples to enter into marriages in New York” as his reasoning for avoiding the waiting period. But Judge Wiggins appears to feel differently:

“Logically and clearly this cite by the Governor is disingenuous,” wrote Wiggins. “The review of such concept altering legislation for three days after generations of existing definitions would not so damage same-sex couples as to necessitate an avoidance of rules meant to ensure full review and discussion prior to any vote. Nonetheless, this Court is reluctantly obliged to rule that that the message of necessity submitted by the Governor was accepted by vote of the Senate, and is NOT within this Court’s province to nullify.”

If it sounds like Wiggins does not necessarily feel positively about some of Governor Cuomo’s decisions in this department, you are not mistaken; Wiggins also said that “It is ironic that much of the state’s brief passionately spews sanctimonious verbiage on the separation of powers in the governmental branches, and clear arm-twisting by the Executive on the Legislative permeates this entire process.”

Joe My God reports that the case also involves lawyer Rena Lindvaldsen, who belongs to Liberty Counsel, an organization that exists to “[advance] religious freedom, the sanctity of life, and the family… by providing pro bono assistance and representation on these and related topics” and which has been accused of ties to ex-gay fugitive Lisa Miller.

The case is being argued by Liberty Counsel attorney Rena Lindvaldsen, the author of Only One Mommy, a book that tells the story of an “ex-gay” mom who kidnapped her daughter to Central America in order to defy multiple court orders to share custody with her former partner. The FBI has investigated the Liberty Counsel for their possible complicity in the kidnapping as the child was found to be living in a home owned by the parent of a Liberty Counsel employee.

The fact that the case has been allowed to proceed doesn’t in any way guarantee that the plaintiffs will win; if it is passed, however, it could be even worse news for New York than Prop 8 was for California, in that the marriages which are now legal would be nullified. Then again, even as this lawsuit moves forward, so do the group of lawsuits against DOMA, as well as Prop 8’s potential progress towards the Supreme Court. The lawsuit in New York is only one facet of the complicated moment for marriage equality and American history. Right now, we don’t have many options except waiting to see how the courts choose to deal with the issue — and hope that they come up with something that allows us to keep our families together.