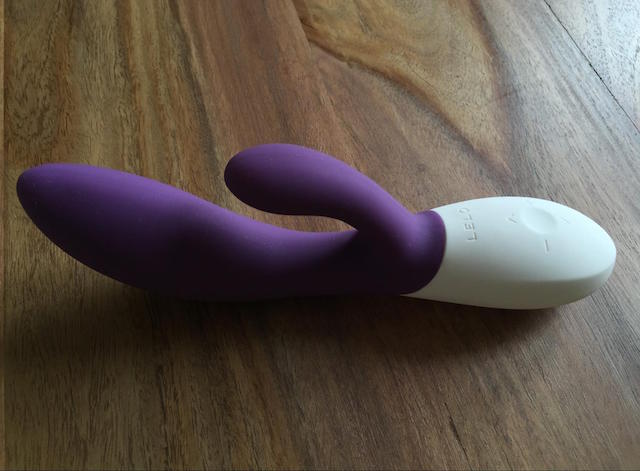 I can’t seem to get this toy to work with my body. I’m sore after using it because the rabbit nub has way too much tension on my clit and the area around it. I got it to fit correctly when I stopped the wave motion at the point the shaft was furthest away from the nub so it was as open as possible, pulled the nub back all the way with my fingers during insertion, and then gently let it spring back into position.

And once in position, it didn’t feel great — the tension on my clit was too much. I think the nub should be positioned differently or be bendable or adjustable fit a variety of bodies. I tried it several times and found it way too pinchy to have it in long enough to experiment more. I had an activity partner try it as well who likes stronger clit pressure than I do, but they also felt it was too pinchy and gave up after a minute.

Then I tried using the wave motion. The shaft’s waving is essentially up and down in a way that could in theory hit the g-spot. I made you a gif to demonstrate:

I found I had to hold the handle tightly in place when I used the wave settings, or the toy just used the rabbit nub as a pivot point or worked its way out of my body. It also pinched harder and didn’t feel actually feel that different than the regular non-wave settings.

The outside of the Ina Wave is a really luxurious soft silicone, including the handle. The silicone is very smooth, but also pretty grippy, so you will probably need to use lube. It also collects dust: The packaging looked nice but the lining of the box was felted and left lots of black fuzz on the toy, making it seem dirty. Thankfully that all came off when I washed it.

When the package arrived, I accidentally received a UK version instead of a US version, so while the toy was the same, the plug was a big UK three-prong plug. Thankfully I have a travel adapter so I could charge it, and the UK plug it came with was 100–240v.

In the end I don’t recommend this toy, but Lelo does make a non-rabbit version which would take the great wave motion (if the end of the toy is held firmly by you or maybe by a partner) and actually fit more bodies.