It’s our 30th Autostraddle Anonymous Sex Toy Review! Over the last few years, we’ve been propositioned frequently by sex toy companies wondering if we’d like to review their toy in exchange for, you know, their toys. In 2011, in addition to “saying yes to the dress” we started saying YES to the sex toys!

This week, one of our anonymous reviewers looked at the Minna Ola. 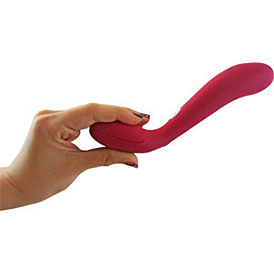 The Ola is one tricked-out toy. Like really tricked out. This is a sex toy for the techie in all of us. It’s like one step away from full programmable sex, so it’s no surprise that it’s one of Babeland’s Best 20th Anniversary toys. What’s it all about?

Finding many sex toys disruptive during couple’s play, the design team behind the Minna Ola set out to design the world’s first customizable vibrator. Ola — whose name is derived from the expression “Ooh-La-La!” — lets users save a variety of vibratory rhythms that they, themselves, create in the heat of the moment. Minna Ola suits any mood, because it responds immediately to the rhythm and strength of your touch. This allows users to easily experiment with patterns that that lead to their own, mind-blowing moments. And knowing more about your body and what pleases it often leads to better sex. Despite being fairly new on the sex toy scene, the Ola has already won multiple awards, most notably as the only sex toy to win a Spark Award for Design Excellence in 2012.

So here’s how this badass works. It’s shaped like an integral sign with a little soft squishy side on one end. On that same end there are two buttons. One is smaller and the other is larger. You press the smaller one to turn it on and it vibrates one, two or three times to let you know how charged it is. Finally someone is tackling the worldwide terrible problem of vibrators running out of batteries while you’re using it. Thank fucking god.

This is really hard to explain. Let this woman do it:

So let’s start with the good. When I got the Ola, I was psyched by the packaging. It comes in a mini version the sort of tube you use to store posters in. And it has a little stand inside! I love toys that come with forethought about how to store it. Also it comes out of the package charged. That’s right, it’s good to go as soon as it’s out of the packaging, which is awesome because I hate having to wait to get down with my bad self. I really can’t emphasize enough how happy this made me.

The Ola has a wide range of vibration. At it’s lowest intensity it’s a soft tickle and at it’s highest intensity it has a pretty good kick. I will admit I basically only used the highest setting, and even there it doesn’t have the same umph as similarly expensive toys from competitors like Je Joue or the Jimmyjane Form series. I like a really a strong vibration, but a friend I brought along for the ride seemed pretty satisfied with Ola’s whole range.

Speaking of that friend, the Ola is ideal for partner play. I liked making my activity partner cover her ears, tapping in a pattern and then surprising her with it. Alternatively, you can just forgo programming it and easily tease your partner by just pressing the squishy part to constantly change up your speed and rhythm.

The whole thing is waterproof so obviously I took in in the shower with my activity partner. We both agreed that the shape was really nice for using standing up because of the way it hugs against your body. We also found that we could both enjoy the vibration standing up next to each other. 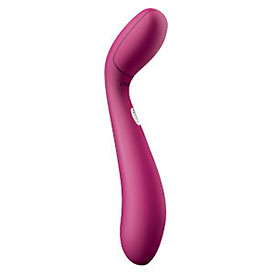 There are some downsides to Ola. The Ola boasts, “Imagine never having to deal with confusing buttons or dials on your vibrator again, and you’ll appreciate the brand-new squeeze technology that makes Ola so unique.” Unfortunately I didn’t find the user interface so natural. If you don’t lock the pattern in fast enough and touch the pad again, even very lightly, it will immediately think you’ve tapped in a new (wimpy) pattern. This can be kind of a bummer. Also it took me a while to figure out what buttons I should push when to make what happen. The instruction guide is not as clear as it thinks it is.

Another downside is that the squishy part deflates, hindering it’s programming side. If that happens, you’re supposed to be able to poke this little hole in it and re-inflate it. That worked for me just fine but I heard through the grapevine that some people have had trouble after a few deflations. To avoid this problem completely, try not to fly with the Ola as pressure change increases the chance of deflating.

Finally, I didn’t find that the Ola did much for me in the way of penetration. I’m someone who’s into that sort of thing and, while I have plenty of sex toys that penetrate on their own, it’s always nice to have multi-functional toys. I found the curve to be too slight for G-spot stimulation on the non-squishy side and the squishy side didn’t give me enough pressure. It was also difficult to use to fuck someone else’s vagina. The mechanics just aren’t quite right. Also, because there’s no flange you should not put this in your asshole.

I do love a good pun!

Get your Minna Ola at Babeland, either in the store or online! And if you’d like it, why not check out more of Babeland’s 20th Anniversary collection of game-changing sex toys. Happy Anniversary Babeland!