It’s our twenty-eighth Autostraddle Anonymous Sex Toy Review! Over the last few years, we’ve been propositioned frequently by sex toy companies wondering if we’d like to review their toy in exchange for, you know, their toys. In 2011, in addition to “saying yes to the dress” we started saying YES to the sex toys! 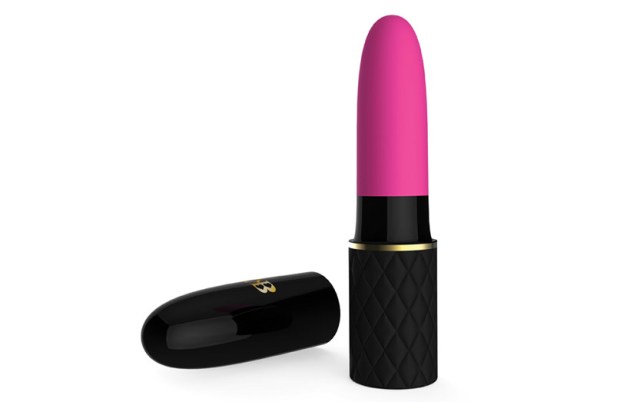 The Babeland’s Best 20th Anniversary Collection does not fuck around, so I had high hopes for this toy even though it looks frivolous at first. Honestly I wondered how different it could be from my regular silver bullet, but as a femme lady I’m always willing to give a new lipstick a try. As I said, it’s created by one of the real housewives of Atlanta – full disclosure, I’ve never seen that show in my life and had no idea who Kandi was until I googled her. I was pleasantly surprised to learn she is the same Kandi who released “Don’t Think I’m Not” in July 2000. She seems to create sex toys that are just as fun as that single. Here’s how Babeland describes the toy:

The first thing you’ll notice about this toy is that it’s very sleek and pretty. It comes in a box and the process of opening the box and removing the toy from the satin lining feels very luxurious. You need to plug it into your computer for two hours before using it, but that’s a small price to pay for never having to use batteries ever ugh I fucking hate using batteries with sex toys because they just always die exactly when you don’t want them to and you never have replacement batteries in your house and it’s just a mess. Anyway. That will never happen with this toy.

The design is really fun and I love how the “lipstick” is bright pink. The lid snaps on and off so I can’t imagine it opening accidentally in a bag or purse, and I appreciated that I could toss it in my bag and totally forget about it. The lid covers the part of the toy that actually touches your clit, so you don’t need to worry about the toy touching the dirt/sand/Goldfish crumbs that collect at the bottom of your bag.

Now, real talk. If you’re a person that doesn’t get off from clit vibrations, or if you need extremely strong and heavy handed pressure to orgasm, this toy might not do it for you. But if you enjoy clit stimulation and are able to come while lying on your back and experiencing slow and steady vibrations on your clit and lips, you are going to be in heaven. Kandi Kisses differs from a regular bullet in that it has seven settings, ranging from “steady slow buzzing” to “fast powerful buzzing” to “holy shit is this a song there is so much rhythm in these buzzes wow!”

I imagine this toy would be really fun to use with a partner, especially because it’s small enough that it wouldn’t interfere with oral sex but is powerful enough that it would definitely up the ante; plus a partner could switch the settings and surprise you. As a solo toy it is also absolutely perfect – personally I picked the setting that worked best for me and just teased myself into oblivion. At the end of the session I could put the cap back on my new lipstick (after washing the toy with soap and water, of course) and return it to its pretty box. A sex toy that’s aesthetically pleasing, comes in pretty packaging, and gets the job done? What more could a girl ask for?