I don’t know if you’ve heard, but there was a thing in California today, like about Prop 8? What this means is that the world will now end, probably, or at least get a lot gayer and shinier. People are painting barns out there, y’all. 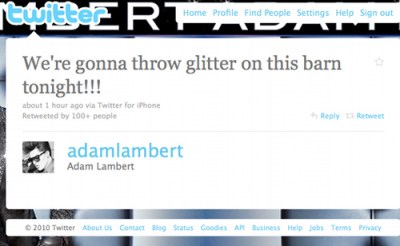 (Full coverage of celeb-ratory Prop 8 tweets over at Jezebel, obvs.) Also, you must read the 138-page document known as Judge Walker’s ruling. Rachel Maddow picks out some of the best bits here, and we’ll have more on that later today/tonight/soon.

As part of what is apparently a coordinated two-pronged attack, Angelina Jolie today allowed one of her children to express interest in a non-gender-normative toy/hygiene product, which means that at least eighteen little girls in California now have to marry princesses slash grow up to be huge f*cking dykes. According to US Magazine, “Pax found a ‘Magnificent Manicure Kit’ that he brought over t 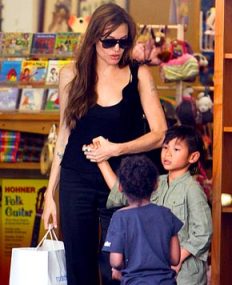 o show Zahara. It looked like they both wanted it and they showed it to Angelina,” the observer explains of the kit, which lets kids make their lotion and give their hands a “mud bath.” After Pax and Zahara pleaded, their 35-year-old mom “agreed they could get it.” In other news, Shiloh “munched on a fruit snack.”(@usmagazine)

This is not the first time that Angelina Jolie has participated in such antics, as has been well documented, she has allowed Shiloh to wear boy clothes.

What next? Since incest and child marriage are clearly only days away from legalization in the new Gay Wild West of California, it’s entirely possible that Pax and Zahara could get married after sharing a luxurious Magnificent Manicure, and then begin adopting their own international infants, creating a kind of first-world-transracial-adoption pyramid scheme. Or, in the case of the total dissolution of heterosexual marriage, maybe Pax and Maddox and Zahara and every other improbably-named child in that family will be forced into a life of drugs and crime with their nuclear family unit completely decimated. This must be the Post-Prop-8-Repeal Golden Age for tabloid reporters – anything goes! Men marrying horses! Children marrying drag queens! Lesbians receiving pension benefits when their partners die of protracted and tragic illnesses! It’s truly a world gone mad!