Last week, a handful of journalists gathered at What Katie Did, a vintage-inspired lingerie and corset boutique for the Blu-ray release of Professor Marston and the Wonder Women. Directed by queer film favorite Angela Robinson (D.E.B.S., The L Word), the film tells the story of Harvard psychologist Dr. William Moulton Marston (Luke Evans), creator of feminist icon Wonder Woman and his polyamorous relationship with his wife Elizabeth (Rebecca Hall) and their lover Olive (Bella Heathcote). The thruple lived together and raised a family, which was quite the scandal in the 1940s, and their experiences in kink and BDSM inspired the look and design of Wonder Woman herself.

Angela Robinson spent almost eight years trying to get the film made, and the result is a story about polyamory and kink that is warm, romantic, and moving (suck it, Fifty Shades!). I sat down with Angela to discuss her exploration of kink and queer culture, the reboot of The L Word, and her plans for a Strangers in Paradise movie. 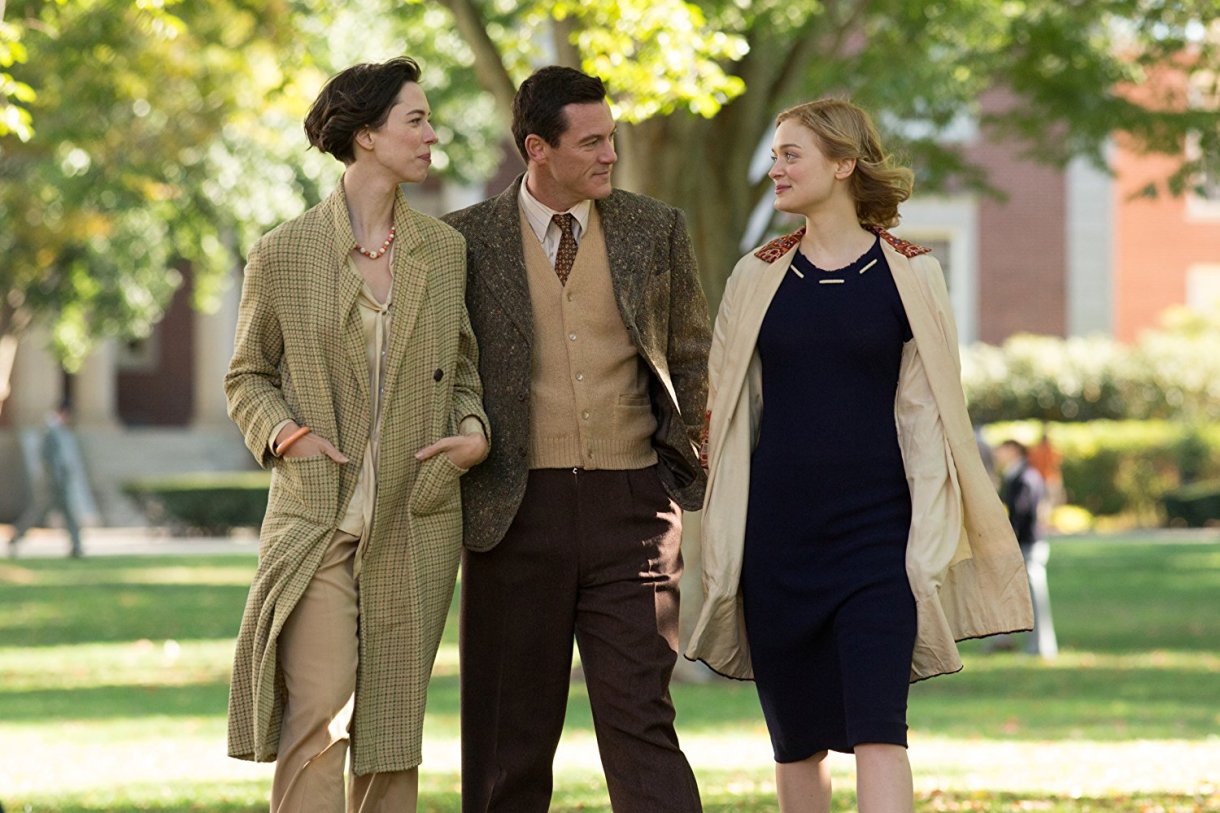 Angela: Yes, I was very adamant from the start, and I remember telling Sony this, that the lie detector scenes are about sex, and the sex scenes are about fantasy and transcendence and Wonder Woman. I talked to my cinematographer, my production designer and I told them I don’t want the traditional depictions of kink in cinema as dark, seedy and bad and sinister, and I don’t want to feel any of that in how we shoot it. The love scenes are where they (William, Elizabeth and Olive) are able to create and transcend these limiting earthly roles, together, and find freedom and fantasy, and whoever they want to be.

It’s a space where they can be the fullest versions of themselves. When they put on these costumes and when they enter this space, it’s about creating themselves. It was so important to me to capture the women during the exchange of consent, and to make sure that every step (of consent) was captured. It was really important to me that Olive lead them, and for her to have agency and make the decisions, to be sure that she wanted to do it: she’s the first person to kiss Elizabeth, she’s very clear on what she wants, she’s the first person to test the lie detector…it was carefully constructed to have Olive decide for herself why she wanted to do these things, but also I really wanted to play with the female gaze.

When Olive decides to put on the costume, we are with Olive. When she sees herself in the Wonder Woman outfit, we stay with her throughout that scene. I wanted to shift the audience’s POV from her as object to her as subject throughout the movie as she gains her sense of self.

Another thing I really loved about the movie, that sets it apart from other queer period films, is it isn’t so much about the angst or the struggle of being queer, as it is about them being poly. It’s so refreshing to see a different angle of this story.

I remember being on a panel with a bunch of incredible queer filmmakers many years ago, and we were talking about the next wave of queer cinema, because I feel like my first film D.E.B.S. was at the tail-end of this incredible wave of queer cinema that started with Greg Araki’s films, Go Fish, But I’m a Cheerleader, and I was kind of at the tail end of that wave. We all knew each other.

So then I’d been thinking a lot about what the next thing is, and I think its moving beyond the issues of the coming out story, whether this is bad or good, and I thought it was important in this story because they (the Marstons) were pre-identity, the term “lesbianism” had only been invented a few years prior as a concept, but they didn’t have the language of poly or queer, and it was important for me to tell the most organic love story, and to have them do what they were doing, and they have to figure out what to do about what they’re doing! 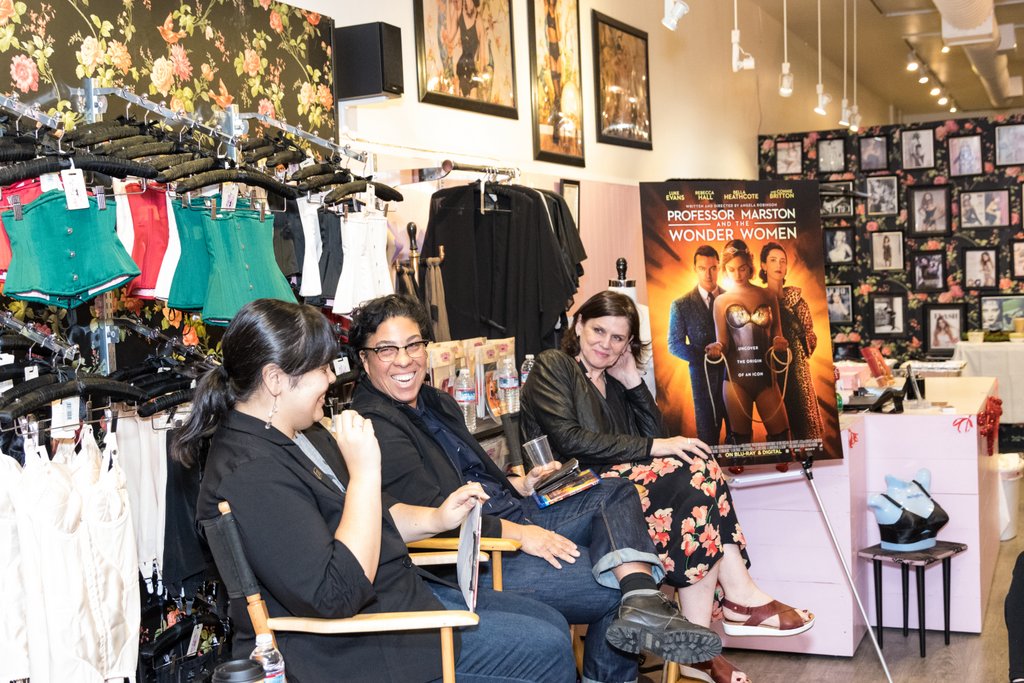 Speaking of D.E.B.S., are there any plans for a sequel?

You know, I thought about and briefly developed a D.E.B.S. TV show, but it didn’t end up going anywhere, but a sequel would be really fun.

I would be super into a D.E.B.S. comic book, I’d write that in a heartbeat If someone wanted to publish it!

As a comics nerd, if you could make your fantasy comic book film, what would it be?

If I could make any comic book movie…ooh that’s a good one. It actually would be Strangers in Paradise. My second choice would be Batwoman Detective, yeah.

How good would Jessica Chastain be as Kate Kane/Batwoman?

SO good! She’d be so good. I don’t know if DC is planning on it, but I love that comic book. Y: The Last Man is also another huge favorite of mine, but I think it’s already in development as a series. Those are some of my top faves.

Do you have any advice for folks who are starting out in the industry, who want to be filmmakers?

Write your truth. A writing teacher once told me, “the script is the coin of the realm” and I did not know what they were talking about, but I didn’t figure it out until I got here, and he also said “paper is cheap.” I didn’t start out wanting to be a writer, I was pretty convinced I couldn’t write, I did everything I could in my power not to write, and then I realized that the only way I’d ever be able to direct something is if I wrote it myself, so I just sat down and read a bunch of books and taught myself to write, which took many many years, but it’s the best thing I ever did because nobody can do anything in this town until somebody writes it down: actors can’t act, agents can’t agent, directors can’t direct, until there’s a script, so I tell everybody to learn how to write, it’s a craft, and don’t let anyone tell you your stuff is bad because the concept of talent doesn’t exist. 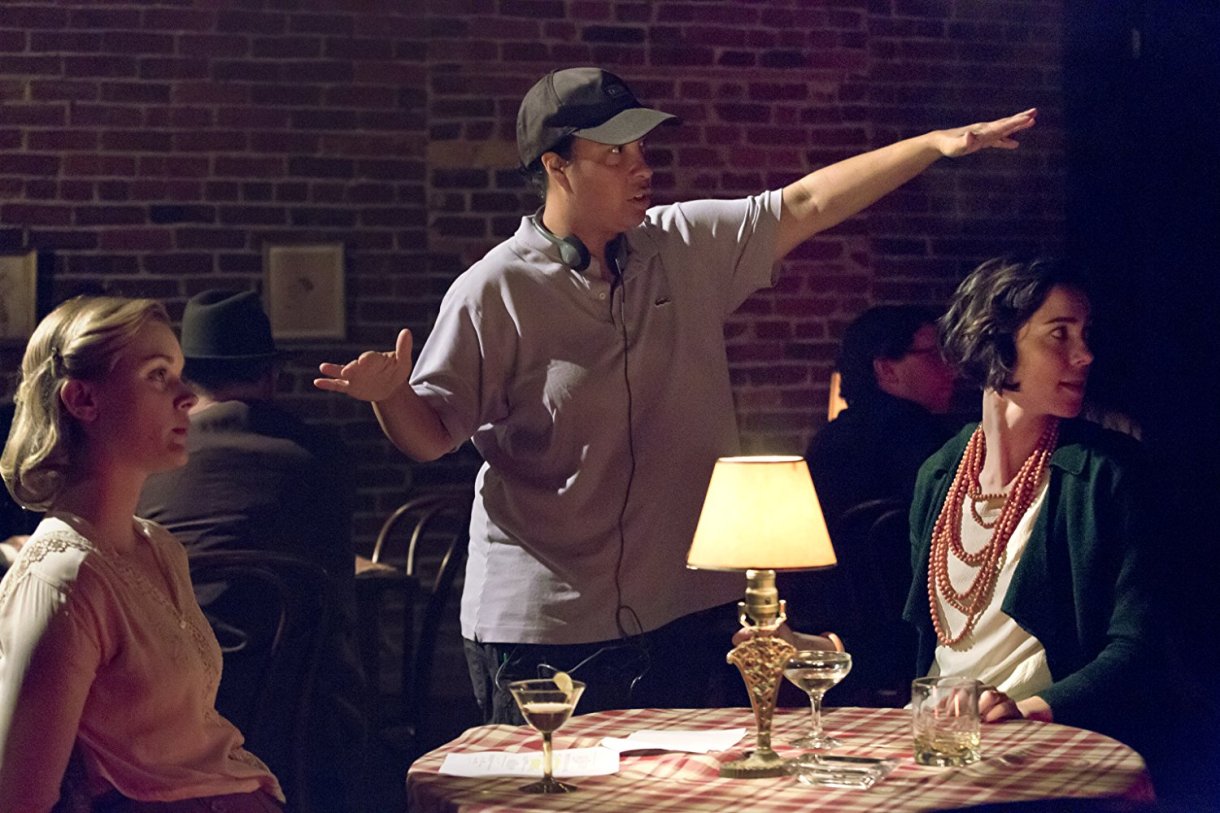 On a personal note, D.E.B.S. was one of those pivotal movies that I saw when I was first coming out, so thanks for making it!

I’m so glad, you know what’s so funny is I just came back from Sundance, and while I was there I ran into three different women in the last week who were like, “thanks for that film” and that’s why I made it: it was the teen movie I never had when I was that age, so that was the goal!

So where are you at with your Strangers in Paradise adaptation?

You know, I was just emailing with Terry Moore this morning; we’re co-writing a draft so we’ve been kind of going back and forth…we’ve started our collaboration and our writing, and a lot of it is how do you…it’s so epic, the entire story of Katchoo and Francine and David, so how do you distill it? I feel more excited about that challenge, having to distill this story (Professor Marston) into a movie, so I’m excited about it. We just started our collaboration, so we are writing away.

So, The L Word is coming back, are you at all involved in the reboot?

I am not involved in the reboot! I would love to be but I can’t because I have a deal elsewhere.

What would you like to see going forward in the 2018 version of The L Word? Is there anything you’re hoping they’ll address?

It’s so interesting, because I remember I was with Guinevere Turner, and we were friends, and she said “they’re making a lesbian show” and at that point it was called Earthlings after Urth Café, and I remember watching the pilot thinking, “Oh my God, I never thought I would see this happen ever” and then I wrote on the first season of the show…but now when they brought it back, I think its amazing because I think there’s a hole in the queer atmosphere that we assumed it would be immediately absorbed and replaced and all this other storytelling would happen, but that didn’t really happen. I’m really excited, but now so much has changed, can you even really call it The L Word anymore? I mean, with trans and gender non-binary/non-conforming, there’s just a whole new cultural landscape out there. The original was just out of a different era, a different moment, so that’s what it needs to address, this brave new world.

Do you know who killed Jenny?

(laughs) I know who I think killed Jenny, but I don’t know.

Want to win a Blu-ray of Professor Marston and the Wonder Women? Simply comment on this post. We’ll draw four winners and contact you via the email address listed in your Autostraddle member profile.