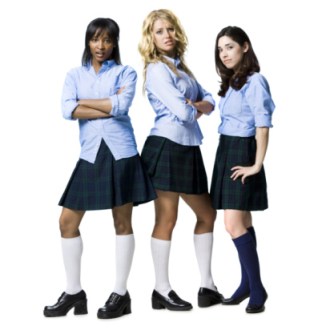 + When the administrators of The Master’s School in West Simsbury, Connecticut, asked Rachel Aviles, a 12th grader, about her sexual orientation, she admitted that indeed she was a lesbian. So then they “encouraged her to withdraw.” At CTNOW, Rachel is described as being “good for Master’s”:

Rachel Aviles was one of the most popular kids at The Master’s School, a K-12 Christian school in West Simsbury. She played sports, kept her grades up, and enthusiastically signed up for any extracurricular activity that would have her, this despite the fact that she isn’t a Christian, though she insists she respects the faith.

The school’s headmaster won’t discuss. Her former coach, Heather Lodovico, told CT Now: “She’s a fantastic kid. My reaction was: ‘Wow. Your God’s really small.’ Whether it’s a sin or not, take that out of the picture, and this is still wrong. I think God’s up there shaking His head going, ‘Really? Really?'”

+ Bitch Magazine has an article about how Billy Corgan Decides Transphobia is the Only Way To Get Attention.

+ Today in Justice Not Being Served – two of the nine men accused of stoning, stabbing and killing a lesbian in 2006 were released yesterday. The court is citing a “lack of evidence.”

+ Secret Gay Pastors You Are Not Alone: “…later that very day I had an appointment with the pastor of a thriving, medium-sized church who had asked to see me because he has come to doubt the correctness of the traditional Christian view of homosexuality. He did not feel free to share those doubts with his congregation; he knew there would be an uproar if he did. So he was seeing me about this matter on (as it were) the down-low.”

+ TransGriot would like media types to review their AP style guide.

+ Look, it’s an infographic about pot from WIRED Magazine:

+ Have you heard the one about the lesbian who walked into an Irish Bar with another lesbian for their engagement party and the shopkeeper next door was like GAH!!? It’s in The New York Times! In Immigrant Areas, a Culture Clash Over Gay Marriage!

+ The Department of Health and Human Services is trotting out additional plans to let you visit your dying wife in the hospital. Meanwhile in Arizona, a judge has ruled that Arizona cannot cut health benefits to its gay employees. Meanwhile in Tennessee, conservatives are pissed that BlueCross BlueShield is trying to treat gay people like actual human beings in need of health care.

+ Also NBC is ‘developing’ a comedy series about a lesbian and her straight best friend. This really shouldn’t be news, because do you realize that like 100 shows get “developed” each year and like four of them actually end up on teevee? Like in October 2009, CBS announced it was developing a multi-camera comedy about lesbians with Carol Leifer at the helm and in November 2010, it was announced that CBS was developing a show called Rhodes to Recovery with Ilene Fucking Chaiken and so on and so on and scoobie doobie doobie.

+ Everybody is Cheating Less Now (Gay and Straight): Probably because we’re too poor to go out and sleep with other people.

+ “The Game” Isn’t Okay With People Pretending Not to Be Gay Because Then They Give Everyone AIDS: “Be gay, you can do that. Game don’t have a problem with gay people. Game has a problem with people that are pretending not to be gay and are gay because the number one issue with that is that you could be fooling somebody and you could give them AIDS and they can die and so that in the closet s– is real scary.”

+ Lesbians forever! Tammy Baldwin is Running for Senate in Wisconsin!

+ Once upon a time our Real L Word parody was removed from YouTube. We worked it out with CBS and YouTube and now it’s back if you want to go experience it again!