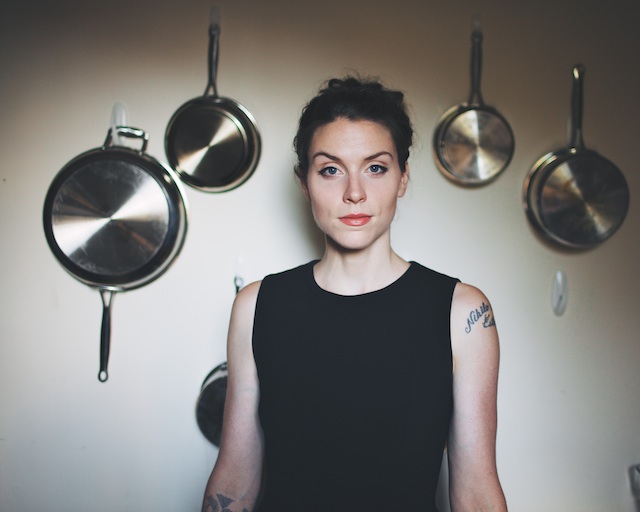 The Bright Smoke is the project of Brooklyn-based musician Mia Wilson whose new album, Late For War, was released earlier this year. Originally from Chicago, Mia developed her sparse, bluesy style while living and playing music anywhere she could, from Illinois to Virginia to England to Namibia before settling down for the past five years in New York City. She was previously singer/guitarist/songwriter for another NYC-based project called The French Exit.

The Bright Smoke has been gaining ground in the NYC music scene this summer and the show is about to hit the road. Mia will kick off her next set of live shows at The Elbo Room in Chicago on August 29, which is tomorrow!

There is definitely an ambient quality to most of what I write and I am very drawn to blues, folk, and more traditional country sounds. So, I guess I would describe my music as an ambient blend of blues, folk, and country, which sounds like a mess but I try to make it work in a way that is palatable.

The last track of the new album is called “Slow Down.” It’s sonically different from all of the other tracks, thematically very separate from the rest, and hands down my favorite to perform live. It’s a lullaby for a very dear friend of mine. With single song purchasing being de rigueur no one gives the last track any love nowadays, but it holds a very important place on an album. The last track is always very much last on purpose. So, obviously I would love for Autostraddle readers to encounter the album as a whole project, but the last track is its own animal.

You can listen to, and purchase, Late For War via BandCamp.

Tell us a little about your new record, Late For War…

This record is my first solo album. It was important for me in recording the new album that the listener hears the music being played as if they were in the room with me. I didn’t want to smooth out all of the rough edges into something really slick. I’d like my music to retain a sense of intimacy where hearing it makes you feel as though it’s all just for you. Because you never know, it might just be.

This new album was produced by the incredible and multi-talented Quincy Ledbetter who did an amazing job connecting the kind of raw sounds that I was hearing at the time to the album’s theme of making a royal mess of love.

You mentioned to me earlier that this is your first foray into being out in your music. What led to your decision to come out?

In general I am not a very public person, particularly when it comes to my personal life, which doesn’t always fit cleanly with being a musician who plays very personal music in very public places. It is something I continuously struggle with. I don’t even give the people at Starbucks my real name which, I’m realizing while saying this, is completely insane and I need to stop doing that. A core group of people close to me have known for a while that I am not straight but it wasn’t something I led with because I wasn’t really sure how to explain myself or how I would be received.

Actually, my serious love for Autostraddle started in the early stages of laying down tracks for this album after reading Coming Out as an Amorphous Weirdo, which is just so spot on and wonderful and holds a very special place in my heart. In terms of choosing to come out as queer in my music, that started about a year and a half ago when I began noticing an increase in the number of disparaging and ignorant comments about the LGBTQ community and queerness in general being said to me and around me by people who assumed they were in good company. This really rattled me. What I had chalked up to being a private person was now functioning more as a lie of omission and I began to feel complicit in their bigotry.

So, I decided to just put it out there regardless of fear and not water it down in my music anymore – not neutralize my pronouns or subject matter to keep other people comfortable. I wanted to be very frank in the stories I am singing on this album because many of the tracks represent a culmination of a lot of really important relationships and interactions with women in my life. Who knows what will motivate future songs and albums. I just know that, for now, I’m spending a lot of time glancing back retrospectively and singing about some ladies, because come on, who doesn’t want to sing about ladies?

The first album I ever bought was The Smashing Pumpkins’ Mellon Collie and the Infinite Sadness, I was 12 and a kid on my bus home from school sold it to me from the inside of his jacket. I’m not sure why I felt the need to go the black market school bus route in purchasing it. I’m almost 100% certain I could have probably just got it from a store. Regardless, that album blew my 12 year old mind.

The last album I bought was Mount Moriah’s The Letting Go. I was so floored with their first and second albums and then I found this EP and it was like finding a $20 in an old pair of jeans. It’s been on repeat for weeks now.

I’m a glutton for heartbreak. I think it’s the great leveler among people and writing is how I am able to process it but I definitely seek it out too much. Perhaps it’s a little played out but I write when I’m down. I’ve tried to write about the happy stuff, the good stuff, but those songs are just terrible.

I’ve been doing a fair bit of writing since the album came out. The last song that I finished and recorded is still in its nascent stages but it’s about that fleeting sense of security that crops up right when you think you’ve got life all sorted and then the wind just shifts and topples everything. Life Jenga! I’m wary of those moments of certitude because that is usually when something extremely humbling happens.

Junior Kimbrough’s All Night Long would do it for me forever.

I think the dream line-up would be with The National and Leonard Cohen. Leonard Cohen is headlining though because Leonard Cohen should open for no one. And then I could probably just explode immediately after stepping off stage because it’s gotta be all down hill from there. (Did I mention ?uestlove is drumming on my set and Colin Greenwood is on bass? I might have left that out.)

I don’t and it’s actually something I talk about to no end. Having a dog is kind of the dream for me, the ultimate sign that you have arrived as a human being. However, I think I would be one of those dog parents that calls in fake-sick to work and cancels plans with friends just to never have to leave the dog alone. It could get really bad really fast.

You can find out more info about Mia and The Bright Smoke, including upcoming tour dates, via Facebook and Twitter. You can listen to and download the new record, Late To War, via BandCamp.