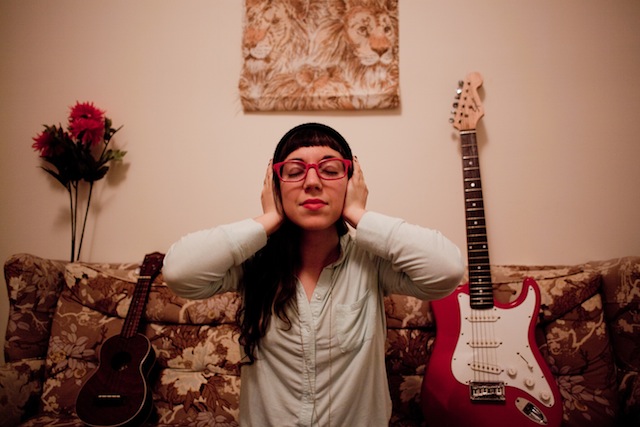 A force on the independent music scene, Brooklyn-based Shira E has been performing her genre-defying tunes across the US, sharing stages with Coco Rosie, TuNe-YaRdS, Mirah, and Andrea Gibson. Last month she launched an Indiegogo to fund the production of her new album and send her across the US this summer on her first solo tour and there are exactly 10 days left to donate, just FYI. Her most recent album, the sincere and sweaty electro-soul Shouts & Sparks, redefines how we deep sea dive into our own hearts. Like her preceding five albums, it’s marked by an experimental, sincere delving into the unknown – and finding comfort there. This is necessary music, carved from the bones of a truly visionary voice in the independent music scene.

The ocean tearing away at a cliff. A small gun, but when the trigger is pulled it shoots seaweed, stars, and honey. A murder of crows whose flight is controlled by a woman’s anger/hunger/light.

What instruments do you play, and how long have you been playing them?

Guitar since 11. Ukulele since 22. A teensy bit of banjo. Enough to get by on the keys. The sampler for less than a year. Singing since forever.

“Dream of Hearts.” The song’s inspiration is a vibrant, daring bolt of a woman. When I sing this live, no matter where I am in the country, I think of her. I close my eyes and feel my heart inflate. I get big as a storm. I am entirely possible. I want everyone in the universe to feel that power and grace.

I don’t have any intentional pets. What I do have is urban wildlife. Oh, New York. I’d show you a photo of what just ran through my kitchen, but the wild is fast!

My early days were a feast of TLC, MC Hammer, and cough cough, Sting. But I’m going to have to go with Boyz II Men Cooleyhighharmony. I was nine or so. “Motownphilly” was essentially a religion to me. It blew my baby mind. That acappella!? What!? The “Bohemian Rhapsody”-esque crazy structure that seemed to dart and leap in a million directions?! I danced along to it on my tape-player, imagined the skinny dude was singing to me, the baritone with the cane, also singing to me. I didn’t realize it until this moment, but I think it was the spark that led to my full on love affair with Motown come high school. My first crush – who come to think of it looked a little bit like the skinny dude, hmmm – and I did a dance to it in front of our whole after school program. We started back to back with our arms crossed and everything.

The last album I bought was the EP Fire Places by my good friends, electronic-pop duo – and couple! – Home Body. They’ve released a full-length since then, but I wore that little homemade EP out! I’m so inspired by their earnest, gutsy pop. Most of the albums I buy these days happen to be by independent artists. We’re the freakiest comets out there.

What my conscious mind can’t understand or doesn’t know how to say. When I sit down to write a song, I know anything goes. I allow my mouth to wander and wonder without censorship. I see what shows up, investigate it, let it lead me. I start by singing simple nonsensical sounds that eventually lead to actual words. I am inspired by surprise, not knowing. There is a need, a bubble that wants to rise to the surface of me and pop. Inspiration, in and of itself, is enough. It doesn’t need to be “because of” something. That burning delight, that feeling, is gold. The texture of sound, a beat that is thick and sharp like an onion, can be enough to get me going for hours.

Women who wail, who allow the animal out of the cage, inspire me: Kate Bush, Nina Simone, Diane Cluck. I can get high off of a siren rolling past my window at 4 AM. I hear it and I have to get up and make a song. Its animal-ness calls to my animal-ness. There’s a way we need each others’ sounds, that we hunger to know what is inside of one another. I want to dig, dig, dig and share what I find, palms sweaty and blackened, with the listener. I want to flash this at the crowd in hopes that someone’s most-innerness will perk up at a particular tone. They will somehow feel seen. How strange! I am almost desperate to see my insides.

Songwriting that seems to float out of its creator inspires and pushes me. Michael Jackson, Elliot Smith, are examples. It’s as if their songs floated whole out of them. Bone body blood, real and whole as a child, the song feels. There is a naturalness that defies explanation. This inspires me like nothing else. It’s magic.

Dancers, painters. People that immerse themselves in what they love. That become animals with a paintbrush, stalking the prey of whatever is most gorgeous/necessary to them.

Hell yes! We can love people for what they love. We don’t have to love what they love. Ya hear? My sweetheart is deep into Third Eye Blind – and sure, it’s a nostalgia thing, and sure, it’s not her favorite band. But like, she loves them, ya know? They turn her knobs and give her the good juice. They do something real for her. First time they came on in the car on a mix she made in high school I nearly pressed the brakes on a bridge. Thing is, I watch her singing along to the lyrics and I flat out don’t understand what is making her light up like a jellyfish. But, when it comes to love, as it does with all creative acts, not understanding is a type of understanding. When you move from there, you are breathing discovery. What’s better? My sweetie and I can both groove ourselves to jail to a good Nina Simone song – and what isn’t a good Nina Simone song? But when I watch her solo-grooving to Third Eye Blind, I’m opened like an umbrella. I’m forced to be insect-like, antennae groping for what is there to love? what is there to love? what is there to love? This, perhaps, is the most important question.

I write poems. I call my mom. I spend time with my girl. I make to-do lists. I cross about half off. I make a mean mushroom burger. The rest is music.

Vinyl while cooking, hanging out with good folk, or daydreaming on the couch. MP3s while bursting through Manhattan foot traffic shredding along to a crazy solo. CDs while driving across the country. As far as I’m concerned, the mix CD in all its delicate, romantic power will never die. Speaking of romance, where’s the tape on this list? Tape whenever blasting “Motownphilly” on the boombox, duh!

What are you hoping to accomplish with your current Indiegogo project?

The Indiegogo is funding the production of my new album, as well as sending me on tour across the country for 2 months. This will be my first real solo tour. Its incredible to ask for help and to receive it with so much love behind it. I feel the ground rising to meet me, the house being built around me. I get letters of encouragement every week. Such kind letters. I’ve been an independent artist for about a decade. I think people are excited to see me take this leap. They want to be a part of the journey, the catapult. I love the word encouragement, because that’s exactly how I feel: filled with courage.

Right now, I’m going to say Sade: Lovers Rock. It reminds me of everyone I love. How does Sade do that, in one song, with one note? What a gift.

If I only had one album to listen to, it would need to be a salve, a very real medicine. Listen to this woman: “The DJ’s playing the same song. I have so much to do. I have to carry on.” “I’m crying everyone’s tears.” And lets not even talk about: “Girl you are rich even with nothing, and you know tenderness comes from pain.” She’s a gratitude warrior, a preacher on behalf of every soft and valuable thing.

Buy Shira E.’s music on Bandcamp, help her produce her new album and go on tour by donating to her Indiegogo, or learn more about her through her website, Facebook, Tumblr, and Twitter!

If you are, or know of, a queer artist or band that should be featured in Almost Famous, drop Crystal the details via crystal [at] autostraddle [dot] com. Please write ‘Almost Famous’ in the subject line!