When I met Jenny Lewis, I was seventeen and awkward and wore too much denim and was having a lot of feelings. At the time, she was singing about the city of Glendora and what is possibly the shittiest New Year’s Eve of all time.

It wasn’t until a few years later that the band Rilo Kiley (and Lewis, its simultaneously adorable and acerbic lead singer) cemented their position as one of my Favorite Bands Ever. By then, I was in college and their brilliant 2004 album, More Adventurous, became the go-to soundtrack for every weepy, introspective car ride that I ever had. Jenny Lewis, opining about the slow fade of love, stole a piece of my heart that I’ve never gotten back.

It’s been a decade since More Adventurous and a lot has happened to Jenny. Rilo Kiley is, sadly, no more. Her estranged father passed away. She released two solo albums of her own and collaborated with boyfriend Johnathan Rice on a project called I’m Having Fun Now. She scored two upcoming films. She battled chronic insomnia. She went out on the road with the Postal Service and played the biggest shows of her career. She’s been everywhere and she’s been nowhere. 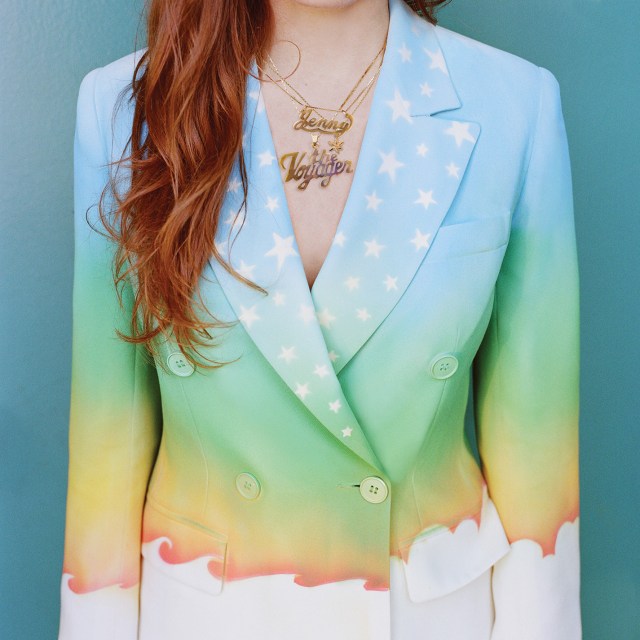 That’s the setting for The Voyager, which is Lewis’ first proper album in six years. It’s also her best. Unlike 2008’s Acid Tongue, which strained itself to avoid sounding anything like a Rilo Kiley record, The Voyager finds Jenny Lewis embracing shiny, thoughtful pop music again and she’s all the better for it. This is a solid set of ten songs that plays out like a collection of particularly satisfying short stories. Each track has its own characters and conflicts, animated by Lewis’ unique voice, which often oscillates between innocence and world-weariness within the span of a moment.

The album opens with “Head Under Water,” a standout track based on a time in Lewis’ life where she didn’t sleep for five days straight. “I’m not the same woman that you were used to,” she admits, right at the beginning. From here, it’s a journey into bad break-ups (“She’s Not Me”), unwanted weddings (“Love U Forever”), horrible vacations (the stunning, Gonzo-esque “Aloha and the Four Johns”), and human mortality (“You Can’t Outrun ‘Em”). But if the subject matter is bleak, it rarely seems it. Lewis’ greatest strength as a songwriter is her ability to combine heavy lyrics with sunny melodies. She emerges from each track with a hopefulness and good humor that easily offsets the darkness. “There’s a little bit of fight left in me yet,” she concludes.

If there’s one overarching theme on The Voyager, it’s the idea of being a woman and getting older and railing against the things that society (and even human instinct) thinks that you should have. “Slippery Slopes” finds a woman contemplating the merits of an open relationship and maybe not liking it so much. “Late Bloomer” tells the tale of a sixteen year-old girl who is infatuated with an older woman, only to have it end with an awkward threesome and sexual jealousy. The terrific lead single “Just One of the Guys” (maybe you’ve seen the video, where Kristen Stewart wears a fake mustache and bros out with Anne Hathaway and Brie Larson?) starts out as a depiction of her guy friends and their relationships with younger women, but gradually morphs into a rallying cry for Ladies Without Babies everywhere.

Overall, The Voyager is a welcome return to form (complete with a really badass rainbow pants suit) from one of indie-pop’s most compelling singer/songwriters. It’s already stolen away another piece of my heart for an artist who I’ve loved for the better part of a decade. I have the feeling that I’m going to be spending a lot of time with this record. After all, “There’s a little bit of magic/ everybody has it,” but Jenny Lewis, perhaps, has a little more than most.

You can buy The Voyager on Amazon or iTunes.

Lauren currently lives in Central Florida, where she is working on her sandal tan and regularly jumping in front of small children to meet Disney Princesses.

Lauren has written 1 article for us.