January 7, 2009 was one of the best days of my entire life. However, at the time, I didn’t actually realize this. In fact, on that very specific day, I felt like my world had been shattered and that I was experiencing one of the worst days ever. The events that transpired on that day would set me on a different path, one that would lead to greater happiness, freedom, self-esteem, and success. But it took some time for this truth to become crystal clear to me.

Around noon, I had just finished lugging my suitcases up to my NYC apartment after a short vacation to the Bahamas. So far, so good, right? The purpose of my trip was twofold. First, I had just celebrated seven months of sobriety and I used the money that I would have otherwise spent on drinking and partying (YES, I partied that hard) to treat myself and my partner of 12 years to a beach vacation away from all of the cold, slushy NYC weather. Second, my partner and I had been fighting as per usual and my hope was that we would rekindle some sort of spark over romantic dinners and snuggling in the sand.

The second goal of the trip was a complete and utter failure. We continued to fight the entire vacation, even as we parked our sandy suitcases in the living room upon returning from what should have been a relaxing experience. At one point during our fight that evening, she excused herself and said she was going to pick up our apartment keys from the pet sitter who lived down the street. She never came home. EVER! Yep folks, I’m not exaggerating. After 12 years, I legit got dumped by the old “I’m going out for a pack of cigarettes (never to return)” routine.

I was blindsided. I never saw it coming. But, a complete stranger, who I will refer to as Bill, had predicted the breakup months before it happened. A few weeks into my sobriety, I had attended a sober event. I met Bill at the gathering and he was giving me advice on how to stay sober and suggested that I not make any major life changes during my first year of recovery. This included starting new relationships or ending existing ones, unless, in the case of the latter, my safety was at risk. I assured Bill that dating wouldn’t be a problem because I was practically married for over a decade. He then asked me if my partner was also an addict. I stated that she was, but that she was not interested in getting sober. In response he gave me “the face” — you know, that one of pure judgment. Bill was very concerned about the stability of my home life.

I was quick to defend my relationship. After all, I had no intention of dumping her. Matter of fact, my sobriety was going to make me a better person in all aspects of my life, including in my relationships, right? Bill then said something along the lines of “I’m not concerned that you’ll leave her. I’m concerned that she’ll leave you. Sometimes, the one who gets sober is the one who gets dumped.”

Her, leave me? Why would she do that? I was the one getting sober, starting all of the hard and painstaking work towards recovery and she was getting a free pass to continue her wild child antics. In fact, once I got sober, she became obsessed that I was going to leave her. I constantly reassured her that I was going to stay and try to make the relationship work. On my end, even though I knew how dysfunctional and codependent our relationship was, she had me convinced that I was not worthy of being loved and that no one else would put up with me. So, it appeared that neither of us was going anywhere.

For 12 years, we were like some horribly tragic combination of Lindsay + Samantha, Bobby + Whitney, Kurt + Courtney, and Amy + Blake. I’m not even making this comparison for some snarky Jezebel comedic effect or to be disrespectful. We were legitimately on a downward spiral with substances that could have ended in jail time, disability, and/or death for one or both of us. I knew that I would lose some of my fair-weather party friends when I got sober. But, her? We’d been through so much, why the fuck would she leave now given the shit show that was our relationship when we were both drinking and partying? Even just one of us getting sober should have given the relationship some hope to improve and survive.

But, that’s the thing about dysfunctional codependent relationships. All parties involved play a very specific role in order to keep the chaos going: rescuer, victim, scapegoat, martyr, enabler, etc. When one person steps out of their role, it disrupts the entire order of things. Who will blame, who will fix, and who will control when roles are shifted? Over the course of our relationship, we had created the perfect foundation to perpetuate asshole active addict behavior. She did ABC, I did XYZ to retaliate…and she did ABC in response to that…and I did XYZ because I was tired of her still doing ABC…and round and round we went all with addiction acting as the glue to our fractured, maddening relationship.

via We Heart It

My sobriety was too real. It served as a mirror, reflecting all of the drunken, stumbling, irresponsible, disrespectful, childish behavior of those who were still using around me, including my partner and some of my so-called best friends. On one hand, she said she fully supported my path to recovery, but in the same breath she would ask me provoking questions like “When is fun Ginger going to come back?” in response to me choosing not to drink. She would express that she was fearful of me leaving her because I joined AA, but simultaneously kept participating in her predictable addict behavior of inviting people over to our apartment to party, spill wine all over the carpet, snort, smoke, etc. when I was at AA meetings. When I would return from my meeting and walk into a cloudy room full of her and our dazed out friends, everyone would look at me as if I were the problem. Mind you, I was coming home from participating in an activity that was literally saving my life, yet I was the pariah. Strangely, no one cared when I was drinking and would stumble home intoxicated, turn on the stove to make drunk treats, and pass out with the gas on.

Some of our “friends” would encourage me to start drinking again, just in smaller amounts. Others were embarrassed to take me to parties because I didn’t drink. And, still others said they felt sorry for me because I could no longer partake. One even went as far as to try to convince my partner that I had joined a cult (AA). But every single last one of these people thought I was a blast, a real good time gal, when I was destroying my health, my potential, and my relationships. Looking back, my partner and our circle of addict friends all fancied themselves as being something comparable to the cast of The Wolf of Wall Street and my sobriety was sinking their party yacht! I was dead weight that needed to be dropped. My partner was the first to go, and the rest disappeared when I needed them to support me in getting better, instead of getting worse.

I started to resent AA and my recovery. I felt that getting sober was robbing me of everything that had ever meant anything to me. My partner. My friends. My social life. And, of course, the thing that meant the most to me: my buzz — my way of checking out of how bad I had made my own life. So, I did what any good addict would do. I relapsed. Uh huh! I rationalized that my life was going to be shitty whether I was sober or fucked up, so might as well get crunk! 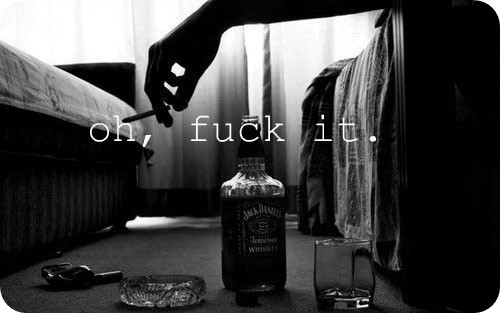 via We Heart It

Relapses are a slippery slope. Some people relapse and never get sober again. These people may learn to control their drinking; they may end up being lifetime chronic alcoholics; they may lose their jobs, their families, and their friends; they may end up destitute, homeless, and/or incarcerated; or, they may die. Others relapse, learn something from their relapse(s), and get back on the road to recovery. I was one of the lucky ones and got sober again. Today, with a little over five years of sobriety under my belt, I carry with me knowledge that I gained from that last relapse. Drinking did not make my pain or problems go away, it only made them worse. It took me getting back on the wagon to realize that my recovery had been working just as it should have been and that my life had been in fact getting better, whether I was aware of it at the time or not. The death of those destructive relationships that I once held so dear was integral to me pursuing and achieving positive goals; developing new and strengthening existing healthy friendships; finding functional, true love; and experiencing happiness with an unaltered mind. I know now that no one who truly cares for me would wish something upon me that would cause my demise. And, for all of this knowledge, recovery, love, and happiness I’ve gained, January 7, 2009 was indeed one of the best days of my life! 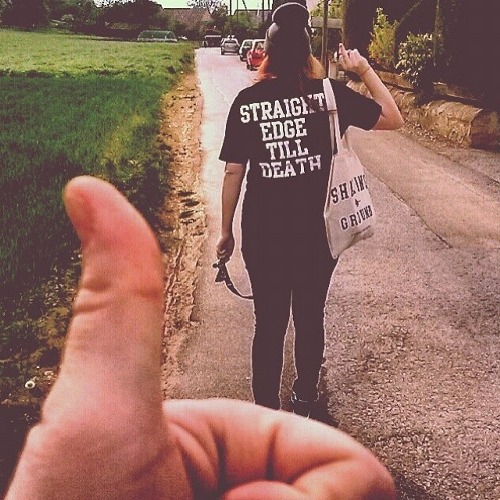 Ginger has written 1 article for us.