If left to my own devices, I probably never would have watched Workin’ Moms. It’s a show about a bunch of married women with babies around the same age, and even though one of them is a lesbian, as a single, childless person living in New York City, I was sure the themes of motherhood and suburban life weren’t going to be things that interested me at all. Readers, I was wrong. I was so wrong.

The reason I even tried it at all is because Dani Kind is in it. I became a fan of Dani from being part of the fandom that dubbed her Dani Fucking Kind after her stint on Wynonna Earp, and her comedic timing and all-around badassery compelled me to check her other show out. (Don’t get me started about how amazing she is in real life, because that would take a whole separate post.) By the end of the first scene I was sold. It was instantly clear to me that Workin’ Moms was bold and hilarious and raw and it not your everyday sitcom about modern motherhood. 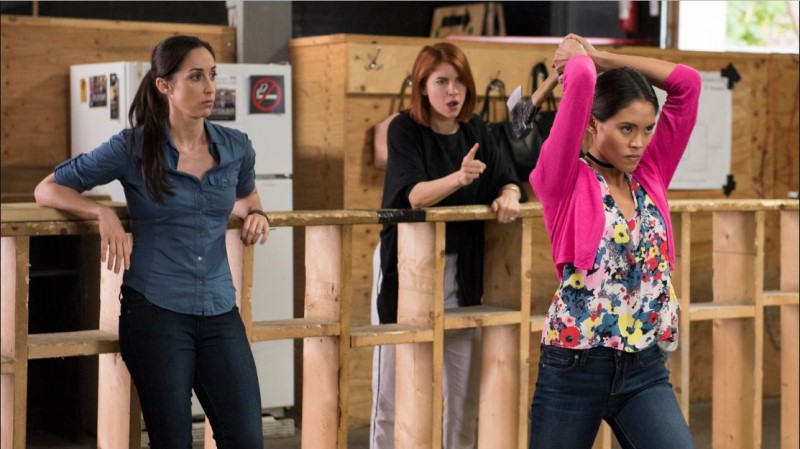 I mean, I’m pretty sure my mother has never thrown an axe. I have, though!

Generally, the show centers around friends in a Mommy and Me type of class (and their kooky teacher, Val), and highlights different types of women, families, and relationships amongst the people in this class. Some even to a hilariously exaggerated extent. For example, Kat Barrell guests sometimes as a bit of a caricature of the young, uptight, secretly-harried mom who thinks she knows the best way to raise her child and WILL judge you for doing anything different. (Side note: this is a great show to play Canadian Bingo with, since it features people like Jessalyn Wanlim from Orphan Black and a few more Wynonna Earp folks like Varun Saranga and Natalie Krill.) 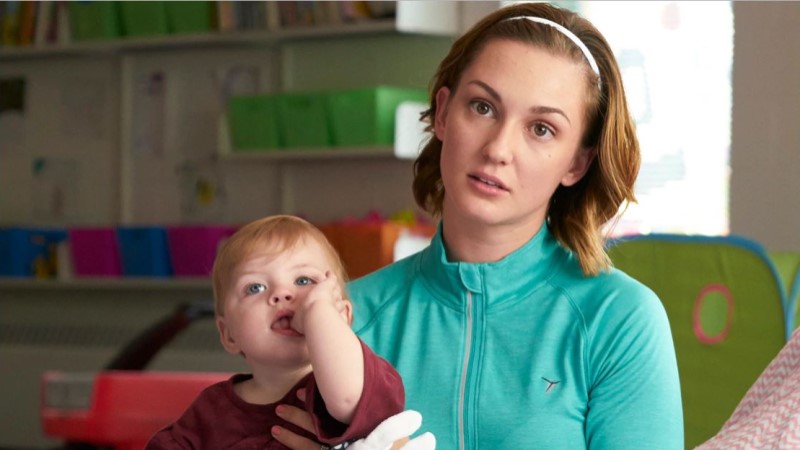 I bet there’s a Haught Mom AU fic out there…

The women of the show are all a little broken, occasionally problematic, they make bad life choices, bad parenting choices, bad relationship choices, bad drug consumption choices, and then have to suffer the consequences. It’s about how they handle mental health issues, loss, betrayal, assault, sexism, and general assholery. It’s about adult-aged women who don’t have it all figured out, because honestly who has it all figured out? Despite being in a different place in my life than these women, their stories still ring true for me in so many ways.

I’ve been watching TV obsessively and writing about its queer content where I can find it for years, and the past few years I’ve been lucky enough that I don’t have to dig too hard to find queer stories. So what this means is that I get to watch shows just because I like them, not because they have queer content. Two years ago, if you asked me about any show I was watching, I would lead with the queer subject matter first (whether it was canon or subtext) and then tell you about what the show was about overall.

One interesting thing I’ve noticed about this show is that I’ll ramble about all the things I love about it, and then the person I’m pitching the show to will ask if it’s queer. Luckily the answer is an enthusiastic yes, but it’s kind of nice that it’s not the REASON I’m watching the show. Frankie is so funny and her storylines are great, and while season one she’s really Going Through It, she eventually gets to have some fun dating antics as she searches for someone to love. But surprising even myself, Frankie’s relationships aren’t the make-or-break stories of this show for me. 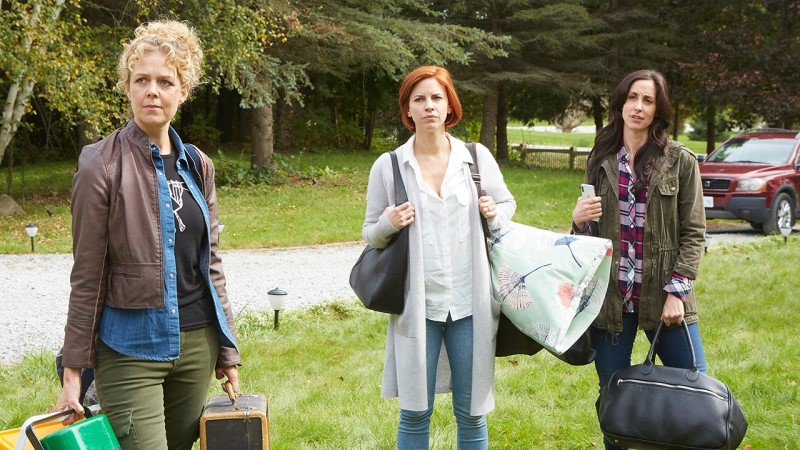 Though I am still invested in Frankie’s happiness, don’t get me wrong.

For me, the true love story is between Kate and Anne. Not romantic love, but that deep, platonic, friendship love between two adult women. I’ve always been the kind of person who has close friendships with other women, and Workin’ Moms does a great job of showing the trials and tribulations of having best friends as an adult with your own life to contend with. How does this best friend fit into your life, how does that relationship shift and grow or drift and change as big things happen to you? How do you fight as adults, how do you make up, what can an adult friendship survive, what SHOULD they survive? I won’t lie to you, while usually this show makes me laugh so hard I have tears streaming down my face, it has, on occasion, made me legitimately cry. In the best, most cathartic ways. 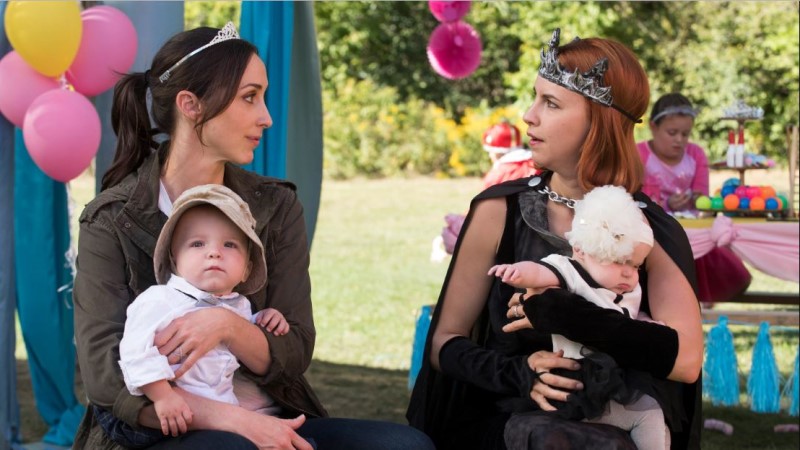 Friendship is the best ship!

So between featuring queer actresses Dani Kind and Kat Barrell (and honestly possibly more of these lovely Canadians are queer that I don’t know about!), giving Frankie her own wild and wacky queer storylines, and the very relatable, complicated friendship between Kate and Anne, this show became one of my favorite go-tos for a little burst of joy in my life. If you’re into quirky comedies that center women without putting them on a pedestal, I think you’ll really enjoy this show if you give it a shot.

And lucky for you, it’s easy to do: All three seasons are on Netflix now, with a fourth season on the way later this year.