After nine students killed themselves in relatively short succession in the school district of Anoka-Hennepin, MN, six students worked with the Southern Poverty Law Center and the National Center for Lesbian Rights to bring the school district to court.  Today, an announcement revealed that there’s been an agreement made on behalf of the students who filed the two federal gender and sexual-orientation harassment lawsuits.

The agreement dictates that the school district, the federal government, and the students in question have entered into a “consent decree” — that resolves the current legal dispute as well as drawing to a close an investigation of harassment in the district that was undertaken by the Department of Justice and the Department of Education. Specifically, the decree calls for “significant new protections” when it comes to harassment of LGBT students, with a “comprehensive, systemic plan to counter and prevent future harassment in district education programs and activities.” 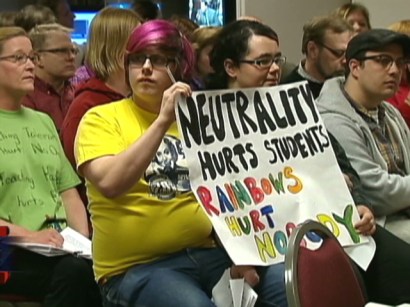 Anoka-Hennepin’s position since 2009 has been one of “neutrality” — an official policy that required teachers and school administrators to “remain neutral on matters regarding sexual orientation including but not limited to student-led discussions.” If you’re reminded by that of the sentiment, attributed to Dante, that “the hottest places in hell are reserved for those who, in times of great moral crisis, maintain their neutrality,” you’re not alone. The agreement that’s resulted from this lawsuit specifically provides that “teachers may affirm the dignity and self-worth of students and any protected characteristics of students, such as being LGBT, without running afoul of any district policy.”

Other provisions of the agreement call for the school district to:

Some of these provisions are actually fairly remarkable in their insight; while it may sound obvious, it’s not at all safe to assume that any given school has “procedures for parental notification while maintaining a student’s right of privacy relating to their real or perceived sexual orientation or gender identity” (as this case in Utah clearly demonstrates). Some things, like “fully investigate reports of harassment,” are absolutely outrageous things to have to actively demand of any institution which claims to be supportive of and caring for children and teens.

It would be wonderful if Anoka-Hennepin became a much safer and more welcoming place for all teens, and perhaps especially queer and trans ones, as a result of this lawsuit. But it won’t change the fact that this lawsuit — a lawsuit spearheaded by six teens, who have watched the shocking deaths of friends and classmates, and have watched the adults in their community wash their hands of any responsibility in addressing them.

It’s shameful that not only did school officials and adults watch this situation develop, but that the ones who had to take it into their own hands were essentially children. That indicates that not just one person, but a whole host of adults have failed the children of that community to a degree that’s honestly incredible. As the entire narrative of the ‘bullying epidemic’ has shown, there are a chilling number of adults who are more interested in “protecting” kids from the idea of bad things (or in the case of Anoka-Hennepin, maybe protecting themselves) than doing what’s necessary to keep them safe in the real world. So far, there do not seem to be any consent decrees to address that.