feature image via The Telegraph

Despite Scotland’s branch of the Anglican Church deeming it legal to ordain female bishops in 2003, it’s taken a while for this news to leak south of the border to England. This week has seen the General Synod debating the ordination of female bishops within England, and on July 9th, they decided – in a nutshell – that they were going to put off deciding. Ridiculously though, it was the best possible result for women. “But HOW can that be?” I hear you wail, while silently cursing the patriarchy. To be fair, I suggest we blame our second-favourite cause of female oppression this time: the Evangelicals. 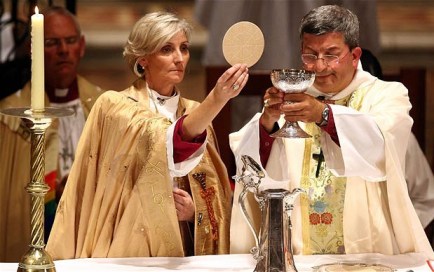 The Anglican Church has a complicated decision-making process that involves drafting legislation years in advance of voting on it; this legislation on female bishops has been in the works since February 2009. At the Synod at the beginning of July, the three houses – Bishops, Clergy and Laity – decided to vote on it. Would it be permissible for England to allow female bishops? 42 out of 44 of the diocesan synods support the measure, so it should have been a clear-cut case… except it wasn’t.

The right-leaning members of the Church – comprising mainly of Anglo-Catholics and Evangelical Anglicans – were firmly “theologically opposed” to the measure. No doubt they cracked open the Bible, and pointed to choice bits of rhetoric. Saint Paul is a particular favourite:

A woman should learn in quietness and full submission. I do not permit a woman to teach or to have authority over a man; she must be silent –1 Timothy 2.11-12

Biblical teaching like this seems not to have affected the Anglican Church in other countries. The Church of England’s ordination of female bishops is not a New Thing. The first female bishop was Li Tim-Oi, ordained in the Anglican Diocese of Hong Kong and Macao, in 1944. 1944, you guys. That’s… a long time before I was born. That’s ten years before my dad was even born. Barbara Harris was ordained as an Episcopal bishop in Massachusetts in 1989, and female bishops became legal in Ireland (and Northern Ireland) in 1990, though none have yet been consecrated. My girlfriend was born in Belfast that year. It’s mad to think that the entirety of her life, female Anglican bishops have been legal in her country, but not in mine. So seriously, what gives?

It turns out the right-wing presence in the House of Laity was large enough to cause significant problems for the proposed legislation, and in May a late amendment to the legislation was tabled. This resulted in Clause 5.1 being hastily added in an attempt to appease them: in essence, it states that any parish that doesn’t want a female bishop can opt to have a male bishop installed who shares their views on women in the church. Not just “a male bishop”, but a male bishop who agrees that women are incapable of ordering and ordaining male clergy within the church.

This created a difficult situation for supporters of the bill. Do they vote for the long-awaited piece of legislation that aims to finally give female priests the chance for promotion they deserve in England? Or do they flush it, on the basis that it would “enshrine discrimination in law”? The Archdeacon of Hackney, Rachel Treweek, described the problem to The Guardian:

It would be very easy to say, ‘Oh, let’s all just vote in favour and get this through.’… I want to get it right now. I don’t want to get something in legislation which means we’re having to come back to this.

In the end, they took a third option – the three houses voted to postpone the bill until a “special” Synod in November. The purpose of this was to ramp up pressure on the House of Bishops – led by the Archbishop of Canterbury, Dr Rowan Williams – to get rid of the offending clause. 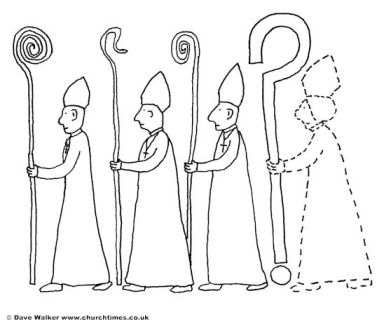 Williams has conceded that the amendment is “a corner into which the Church has backed itself and out of which we are trying to get”, but also implied that senior Bishops might not be able to come up with a better legislative compromise. It seems that the supporters in the house of Clergy and house of Laity will have to fight hard to get the bishops thinking of solutions. “Never in my experience has the church been so out of step with the good news and of the people of this country,” laments Celia Thomson, Canon Pastor of Gloucester cathedral.

In reality, this delay of the bill was the best possible result for female clergy, but that’s not the key issue here: it’s that the people who still believe in theologically-sanctioned sexism are being taken seriously, even pandered to, and thus impede actual progress. Evangelicals have threatened to leave the Church if the legislation passes; coincidentally, this mirrors the threat of the Anglican Church as a whole to break with the UK as the state religion if gay marriage law passes.