Truly La Virgen is watching over the queer Latinxs of America, as just nine days ago we were blessed with the news that actress/human saltshaker Aubrey Plaza is bisexual, and then today, Queen of My Heart and Brooklyn Nine-Nine star Stephanie Beatriz took to Twitter to confirm that the same is true about her! Yes, this is happening, y’all, both Aubrey Plaza and Stephanie Beatriz like girls. Have we entered into some strange but wonderful dream world? No, we’re awake! I know we forget this a lot, especially right now, but the real world can be pretty cool sometimes.

In a very smooth move, Beatriz spring boarded off of Plaza’s announcement, sharing the quote “I fall in love with girls and guys. I can’t help it.” and added an enthusiastic “Yup” of her own. When a follower asked if that meant what we all thought (and hoped) it meant, Beatriz tweeted “yes y’all.” followed by the emoji for girl kissing boy, A-OK and girl kissing girl, A-OK. Excellent message and excellent use of emoji.

If you aren’t already obsessed with Beatriz, she’s best known for playing Detective Rosa Diaz on Brooklyn Nine-Nine, where she stars alongside other awesome and hilarious ladies Melissa Fumero and Chelsea Peretti. Diaz is perhaps the biggest, most intimidatingly sexy badass on TV right now, and one of the funniest characters on one of the funniest shows on TV. In real life, however, Beatriz seems like a total sweetheart, often tweeting about her love of dancing, pizza and her cute dog. She also had roles in the terrific film Short Term 12 and Ice Age: Collision Course and has films The Light of the Moon and Half Magic coming out soon. 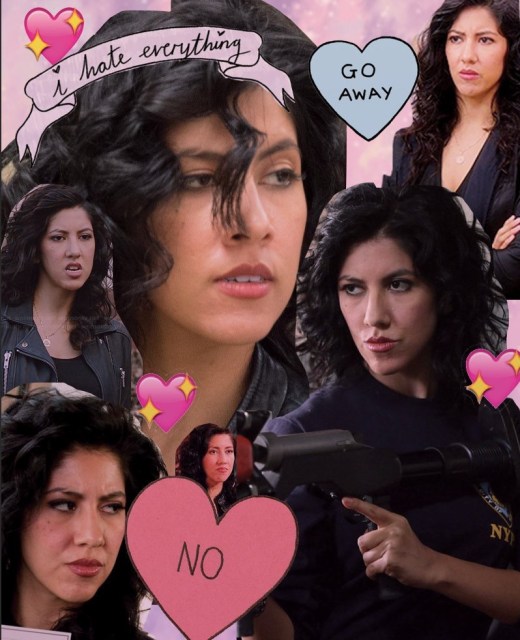 This collage, made by Madeleine Flores was my phone background for several months.

Both Rosa Diaz and Stephanie Beatriz are gems and we’re lucky to have them in our community. As a queer Latina, it always warms my heart and fills me with hope to see other LGBTQ Latinxs step forward. And seriously, ugh, that hair, those cheekbones, that smile! Stephanie Beatriz likes girls, Stephanie Beatriz is bisexual, today is a good day.

Join A+
Related:latinastephanie beatrizThis Is A Coming Out Postwomen of color