When I first wrote about this show in my preview of upcoming shows featuring trans women, I said that to me, it seemed like it might be a reality show version of Jill Soloway’s hit Amazon show Transparent. I also said I hoped that, unlike Maura’s family in that show, the transgender parent in Becoming Us‘s family wouldn’t be filled with horrible people. While I wouldn’t go that far, after watching the first two episodes I was definitely expecting Carly’s family and the other people in the show to be much more supportive of her and to be better examples of how to act when you have a trans family member than they were. After all, why would you agree to star in a reality show unless you thought it was going to paint a good picture of you? Instead, I found myself crying halfway through the first episode — not because the show was touching my heart, but because I couldn’t believe how Carly was being talked about by her family. 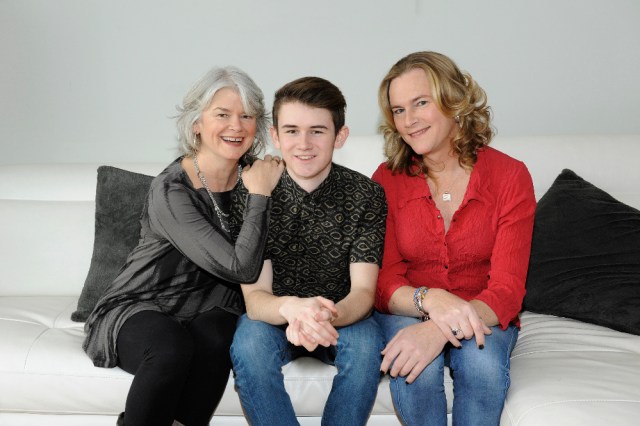 While Becoming Us is ostensibly among the new wave of TV shows about trans woman, it’s really about a 16-year-old boy named Ben from Evanston, Illinois. Ben has a group of friends, a girlfriend who also has a transgender parent, an older sister, a mom named Suzy and another parent named Carly. Carly has recently come out as transgender and the show is mostly about how Ben and his friends and family are dealing with her transition. It’s about how hard it is when your parent is trans and how you have to learn to deal with that difficulty and accept that trans parent. So, right from the start, this is clearly a show for cis people, and not for trans people. And that’s fine. I do think that there’s some real value in shows for cis people that are about trans characters. It’s an easy way for them to learn some things and test out their reaction to trans people without having to actually react to a real-life trans woman and possibly ruin her day.

At the beginning of the show we’re introduced to Ben, who right away becomes the sympathetic center of the show. We’re going on his journey, we know more of his emotions and feelings than anyone else’s, we’re supposed to be able to relate to him. This is a problem. Ben isn’t exactly taking his parent’s transition well. He’s clearly confused, clearly frustrated and clearly uncomfortable. There’s a scene where Ben is hanging out with his friends and they start talking about trans people and pronouns. They look up a list of gender-neutral pronouns and start listing them off and laughing at them. Ben goes on to say that it’s all so confusing and he’s just going to call Carly “Carly” even though she clearly just uses “she/her” pronouns. This is when I started crying. It wasn’t the only time I would be shocked at how Carly was talked about by her family. 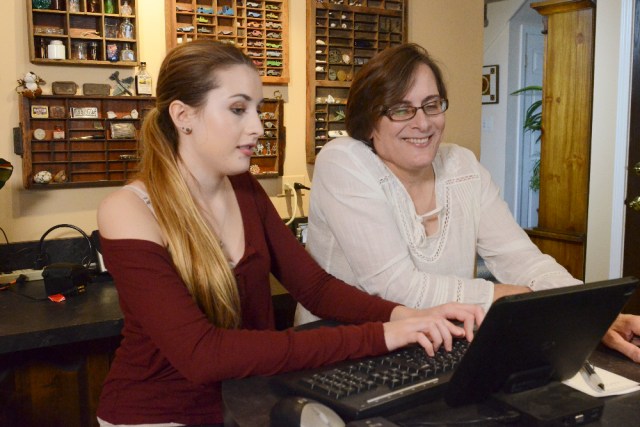 There was another scene, this time in the second episode, where Ben was talking to his girlfriend Danielle about his struggling relationship with Carly. She asks if Carly wants Ben to call her Mom or Dad or what. Ben replies by saying that Carly’s asked him to call her Mom, but he refuses to, and that if he can’t call her Dad, than he’s gonna call her nothing at all. This feeling is later reinforced when Ben’s talking to his Mom and she talks about “if you reach out to Carly and you want to continue your dad-son relationship, because I ain’t gonna say mom-son relationship. Ever!” This was hard for me to watch. I can’t even imagine how crushed I would have been if my parents told me that they refused to ever call me their daughter and that if they couldn’t call me their son, they wouldn’t call me anything. I know that this is a change for the cis people in this show, and I know that they’re learning, but they seem to have so little compassion for Carly. And the way the show is set up, it’s like we’re supposed to be on their side.

There were a lot of scenes like this, a lot of times when Ben would talk about how hard Carly’s transition is on him, how difficult this is to process and how much this is messing up his life. All of these feelings are affirmed by his friends and his mom. Danielle shares some of his same feelings, her dad, who is transgender, but still uses “he/him,” the name Daniel and Dad, but seems to be much more willing to learn and grow than Ben. It was very strange watching the people in this show, which seems to be advertised as being good for the trans community, being so actively resistant to embracing its main trans character. 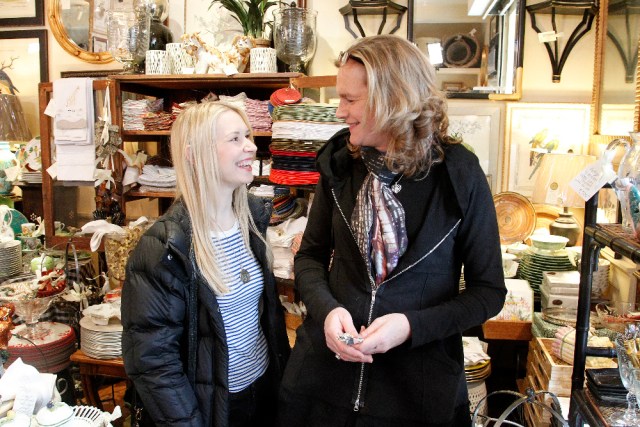 There were a few good moments, though. One of my favorites was when Carly was talking to the camera and she said, “you know, I always said, you’re not losing me at all, I’m not going anywhere. Instead, you’re gonna get more of me than you ever got before.” When the narrative around trans women coming out is so often that people are losing a father or son or brother, it’s nice to hear someone word it this way.

Another really touching scene was between Danielle and her dad, who still uses “he/him” pronouns, and goes by Dad and Daniel. They were talking about how unfair it is that Daniel doesn’t feel safe going outside presenting as a woman and you could tell that Danielle just wanted her dad to be able to be himself and be happy. Watching Carly take Daniel to go bra shopping was also really great; it was the first time that Daniel seemed genuinely happy in the episode. My favorite character (out of the cis people, at least), was Sutton, Ben’s older sister who’s getting married soon. Although she’s not Carly’s daughter, there was a really sweet scene where she and Carly went wedding-registry shopping, bonded and had a great time, something I could never see Ben or Suzy doing. Another Sutton highlight was when she and her friend looked up a video of a trans woman getting bottom surgery and she not only corrected her friend when she misgendered the trans woman, but she also was pretty much the only person not “othering” trans women.

This isn’t the review of this episode that I wanted to write. While I didn’t think I would fall in love with this show, I thought it would be a great resource and a good example of how to act for people who have a family member or friend who comes out as trans. I thought that it would show a real-life example of how a family reacts to the news that the person they thought was the father is really another mother and how they show that person love, support and affirmation. Instead, I got a show about how hard it is for cis people to deal with the fact that someone they love is trans. 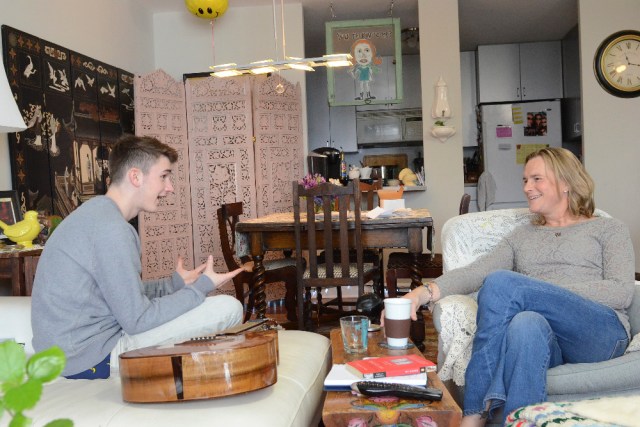 I realize that the narrative that Becoming Us shows is pretty typical. A big number of trans people who come out have strained relationships with their families, especially at first. But this isn’t the only narrative, and it’s far from the ideal one. People who have a family member who comes out as trans are going to watch this show, and they’re going to see the way Ben and his mother and his friends talk about Carly and since no one (for the most part) challenges or corrects them, they’re going to think that this is the proper way to react. They’re going to think that if they misgender or disrespect their transgender loved one, it’s not just okay, it’s expected.

I don’t like how much this show reminded me of Transparent. On that fictional show, all of Maura’s children are selfish, immature and kind of just horrible people, so when they misgender Maura or laugh about trans people or do other things that I could see Ben, Suzy and some of the others do on Becoming Us, we know that we shouldn’t look to them as role models. We know that we shouldn’t follow their example. That’s not so clear on this show. These are real people, and Ben is definitely the viewer’s entry point into this world; the show is encouraging us to relate to him.

Becoming Us positions itself as being pro-transgender. It seems very much like the producers and the people who star in it feel like they’re being good allies and they’re doing a public service. Really, I’m afraid that it’s giving people a bad example of how to react when one of your loved ones come out. The moral of the first two episodes seems to be “Trans people are difficult and they cause a lot of stress and drama in their cis loved one’s lives. So it’s okay if you don’t react very well, it’s okay if you’re not supportive right away and it’s okay if you make it all about you,” which is not a message that I want to hear or have broadcast on national television.

I also know that these are real people, and that real people make mistakes and more importantly, that real people can grow and learn from their mistakes. So I do hope that we’ll see some of that growth on this show. The end of the second episode actually did indicate some of this growth from Ben, so I do think we might see more. If it does, I think that this show has the potential to help trans people by giving their family and friends a guide on how to be supportive, something which a lot of friends and family of trans people often look for when someone comes out as trans. That will only happen if people watch the whole show, though (and if it turns into the show that I hope it does). If you were to watch just these first two episodes, you’d get the same ideas that I did, and those ideas aren’t so great for trans women.

Becoming Us, which is produced by Ryan Seacrest, premieres on ABC Family on Monday, June 8th at 9 PM ET/PT