Hello, my dear Autostraddlers. How are you? I hope you’re drinking lots of water and sitting under lots of trees or even maybe just standing underneath tall people who have afros because, my lovely homoqueers, it’s hot! You know how during the hottest part of a summer’s day you can sometimes see heat waves rising from the sidewalk, making everything blurry? Well that’s what’s been happening to my brain. Not only does summer in New York make my skin feel like it’s melting off my bones, but I swear my brain cells are evaporating, rising in blurry squiggle waves of heat from my skull and into my hair, which, if it weren’t for all the inexpensive black hair products I’ve found in Brooklyn, would resemble a frizzy nest perfectly suitable for one of New York’s many rodents.

But let’s not think about that right now, okay? Despite the heat, many exciting things have transpired recently, and I’m not just talking about sweat. I don’t know if you know this already, but I’m pretty gay and pretty Canadian, eh; so how lucky am I that this past week there has been not one, but two events to mark my favourite identities? Unfortunately, the Canadian Consulate in New York chose to celebrate Canada Day on the same day as the Dyke March, and dykes will always win over nationalism, so I joined the dykes! And the queers! And we marched! Or, as a fellow Autostraddler put it, we did a kind of homo shuffle because when you have that many queers in one place at one time, it’s hard to move as quickly as the city wants you to.

There were all sorts of sights at the Dyke March, like boobs, and a cute baby in a jumper that said “queer spawn” and drag queens dressed as nuns who sang about clits! Adding to the entertainment, there was a solitary religious protestor who stood on the sidelines holding a sign that read “Christ died for our sin.” I always thought seeing religious protestors so close to me would make me feel scared or angry, but in reality, it was just really, really funny. I mean, there we were with our rainbows, our boobs, our queerspawn, our clit-worshiping nuns, our bravery, our laughter, our signs proclaiming the need to stand with trans* people and people of colour, our purple Dyke March pins which read “dyke” or “fisting,” our sandals, our sneakers, our heels, our wheelchairs, and some random guy felt the need to talk about sin? What sin? His sin for being against making the world a better place by marching for diversity, pride, equality, and fun? It was all a little funny. He looked like a circus side-show, especially with the person beside him happily holding a sign that accurately let everyone know that “this guy needs a hobby.” 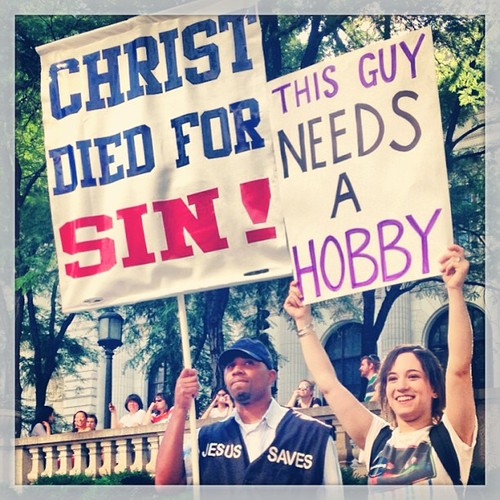 I like getting the chance to be gay without having to think too much about it.

Once upon a time, many years ago on a cold winter’s night (no, I’m serious. Remember I’m from the Canadian prairies!) I felt like the only little queerling in the world as I chopped my hair into a lesbian haircut and listened to the soundtrack to Rent, not knowing that one day I would pay actual rent in New York and march (I mean shuffle) amongst hundreds of queers through the streets of Manhattan, not even one bit worried about my long hair not making me look “gay enough.” When you’re surrounded by so many queers celebrating queer, you feel normal by default and happy because everyone around you is happy. You don’t feel the need to change how you look as some sort of signal, and having a conversation on where to get sandwiches and water is just as, if not more important than discussions on identity and queerness and coming out. Constantly having to explain and defend your sexuality and/or gender identity is heavy and exhausting. I like getting the chance to be gay without having to think too much about it. That’s why the spaces created in the Dyke March, Pride, and A-Camp are so wonderful and important. 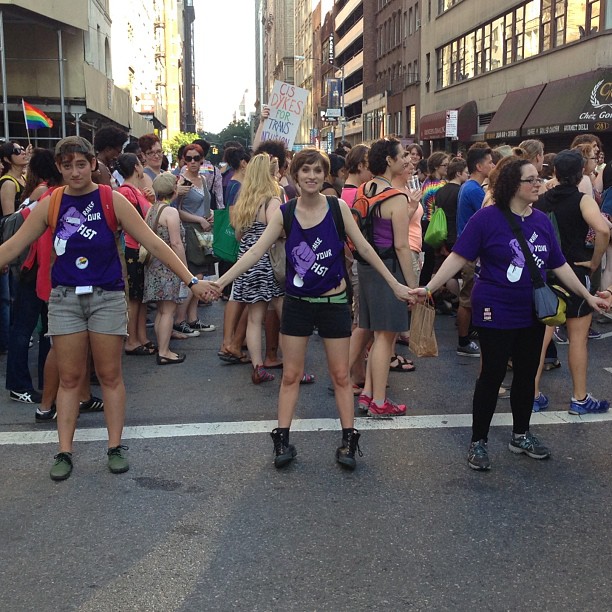 Our very own Gabrielle is the cutest marshall ever!
via @stef_schwartz

I’m still a little sad I missed the Canada Day celebrations at the embassy though. I’ll have to have a belated Canada Day party in the coming weeks. Who’s in?