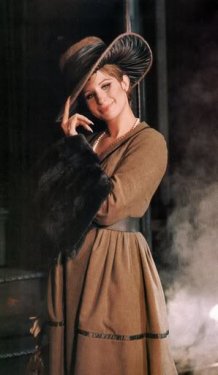 Barbra Streisand is a powerhouse. Her rendition of “Don’t Rain On My Parade” made Funny Girl a show worth watching and gave Lea Michele something worth covering at the Tony Awards. Also, say what you want about Carol Channing, but Barbra owns Hello Dolly!. Some people even like Yentl, probably.

There’s a reason why every thrift store has at least four different Barbra Streisand records: because she’s ridiculously talented and record players are way too expensive for non-hipsters. I have nothing but respect for her. That being said, you can’t be in the business as long as she has without having moments that seems strange in retrospect. So happy belated 70th birthday, Babs. Here are some awkward things you were a part of.

This is actually one of my all-time favorite Barbra performances. “My Name Is Barbra” was her first television special, and you should definitely watch the whole thing if you get a chance, but this is my favorite part. It’s just so madcap and strange and wonderful, it’s hard to dislike. Sidenote, this is also the special that gave the world “People.”

Barbra on the TV, Special #2: Now with animals!

A Star Is Born

The Belle of 14th Street

I feel like the general concept of this video is “Barbra being Barbra and also vaudeville!,” and it kind of works, but it mostly gives me second-hand awkwardness.

I would give you context if I had it. I feel like somewhere, someone’s good idea went horribly wrong.

“Tell Him” with Celine Dion

When she was 21, Barbra recorded a duet with Judy Garland, and it was basically flawless, and eventually Glee covered it, so I think we could call that one a success. This video, however, is a totally different story. It’s like they had a meeting and decided that they’d be harder to impersonate if they were singing together.

Ok, tell me all about your Barbra feelings!