If you feel unclear on what the Commander in Chief Forum was last night, you’re not alone. That’s in part because it was the first one ever; NBC, who came up with it and hosted it, billed it as an event where “both Hillary Clinton and Donald Trump will be on stage back-to-back taking questions on national security, military affairs and veterans issues from NBC News and an audience comprised mainly of military veterans and active service members.”

It wasn’t a debate; Trump and Hillary Clinton weren’t meant to directly address one another, but to be quizzed one after the other by Matt Lauer, the moderator chosen by NBC. It was, as the rest of this election cycle has been, quite a slog. You can read a transcript of it here and a fact check from USA Today here.

What happened during it, though? What do we take away? Well! Let’s talk about it:

1. Trump arguably does not understand how the military works

By now you may have seen headlines about Trump threatening to “fire generals” — the gist of the backstory on this is that one of the many bizarre things Trump has said lately is that he’s more knowledgeable about ISIS than many generals. When pressed on how he would work with the generals he just insulted, Trump implied he would fire them and, presumably, have them replaced with other generals he likes more. The issue is that that isn’t actually a power the commander-in-chief has — although it is how you could run a corporation, Trump wouldn’t have the power as President to run the military like that. As WaPo explains:

As president, Trump’s ability to overhaul the leaders of the military is limited. As commander in chief, he can remove generals from positions but he “doesn’t enjoy Donald Trump-like powers to summarily fire service members,” as Brian Palmer explained for Slate back in 2010 (clearly when “The Apprentice” was still on the air). When President Obama relieved Army Gen. Stanley McChrystal of his command in 2010 after McChrystal gave some ill-advised comments to a reporter, McChrystal retained his rank as a four-star general, until he decided to retire. Trump could seek the counsel of other members of the military’s leadership, but he can’t simply clean house or bring in people from the outside.

In a lot of ways, this isn’t unusual; Trump has demonstrated a terrifying lack of understanding of how a lot of parts of national governance work (like wondering why we have nuclear warheads if we can’t use them). It is, however, interesting to see him publicly insult and alienate a bunch of people he would likely have to work with in one way or another regardless, and in front of a live audience of veterans and US military. Trump has also been (rightly) criticized for a tweet that suggests he doesn’t take the epidemic of sexual assault in the military seriously; his understanding of many things related to the military seems lacking. 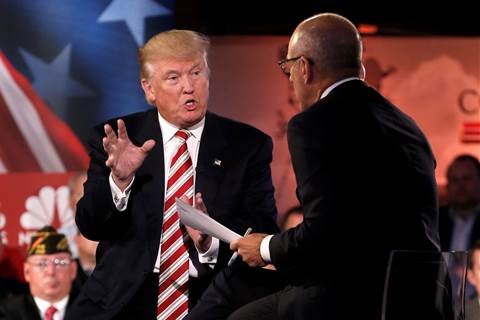 2. Trump does not have a plan to address ISIS

Saying that you have a “secret plan” that you will only discuss with the (aforementioned, quasi-imaginary, newly hired) generals of your choosing is the same as saying that you have no plan. In March, Trump said his plan to stop ISIS was to destroy oil in some parts of the world and to stop buying oil from Saudi Arabia, believing that disrupting the oil economy would effectively defund ISIS. (His plan did not need to be secret then, apparently.) In his performance with Lauer at the forum, Trump again harped on oil, saying that while he still doesn’t believe we should have entered Iraq, the US also should have stolen all of Iraq’s oil, and that that would have prevented ISIS from ever forming, although also still we shouldn’t have been in Iraq.

TRUMP: The — and I think you know — because you’ve been watching me I think for a long time — I’ve always said, shouldn’t be there, but if we’re going to get out, take the oil. If we would have taken the oil, you wouldn’t have ISIS, because ISIS formed with the power and the wealth of that oil.

TRUMP: Just we would leave a certain group behind and you would take various sections where they have the oil. They have — people don’t know this about Iraq, but they have among the largest oil reserves in the world, in the entire world.

It’s tempting to conclude that Trump’s secret plan is time traveling back to Iraq of 15 years ago. But also, just a few minutes later, Trump said “But when I do come up with a plan that I like…” In conclusion, Trump does not have a plan when it comes to ISIS or international terrorism.

3. Neither the email thing nor harping on Hillary to smile are going away

Does the issue of Hillary’s emails have to do with the military? Maybe, kind of, in that it relates to national security, and in the sense that everything in the US has to do with the military, somehow. It doesn’t really matter in the end because her emails made up about a third of her time, and that probably isn’t going to go away anytime soon. This is just the world we live in now. Much like how you know that you’ll have to talk to 2-7 electronic menus before you reach a real person at your bank, we will all have to listen to questions about Hillary Clinton’s emails for at least 15% of the total discussion time before talking about anything else that’s not emails.

Reince Priebus, a wicked gnome who has been cursed to live under a bridge and also the chairman of the RNC, tweeted that Hillary was “angry + defensive the entire time – no smile and uncomfortable.” This is, of course, absurd; there is no reason to smile while being grilled on live national television by a man who is bad at his job about your email server while a would-be fascist dictator is waiting in the wings, potentially sharing memes about you in a group text with Putin and David Duke. It’s not fun. But, once again, this is how things are, right now, I guess! I say this to manage both your expectations and my own. 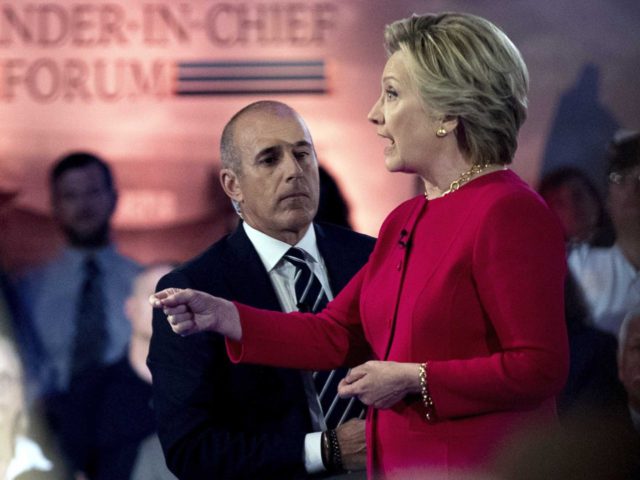 Oh no! There he goes! Can someone grab his leash, he hasn’t graduated come when called always training

4. These debates will be a minefield for moderation

It is by now a truth universally acknowledged that Matt Lauer did a terrible job last night. He gave Trump softball questions and didn’t press him or challenge him on any of his answers, while pushing hard on Hillary and spending a very long time talking about her emails. While the commentariat all seem in agreement that Lauer did, again, a terrible job (even Breitbart thinks so, although their angle is that he was “soft on Hillary”), it probably isn’t a problem isolated to him. We’ve all seen in our everyday lives how polarized and vitriolic interactions become around this election; WaPo, at least, believes that journalists’ fear of that dynamic and the fact that they likely can’t win with viewers’ perception, we may see other moderators softballing for fear of being seen as biased, an assertion which could hurt their careers.

If you’ve followed debates for the past few elections, you know that facts are never really in high demand; candidates often make outsized or even demonstrably false claims. They’re always fact-checked later, but what percentage of people who watched the original airing search afterwards for the fact-checks? It’s not unrealistic to fear that blatant lying will be totally feasible. This problem would be solved if we approached debates with my proposed method, having each candidate present their policies to an all-knowing, truth-seeing sphinx.

After months of maneuvering and seeming like he might try to avoid having to debate Hillary at all, the first debate date is set for Sept. 26. It seems like if this first televised event, a non-debate, between the two candidates shows us anything, it’s that anything can and will happen. In theory, televised debates do (at least) two things: they allow people to become familiar with a candidate’s policies in a digestible way without having to do dense research (in theory; in practice, you’ll usually learn much more from the fact checks of debates than debates!), and they allow people to see how a candidate responds to pressure, thinks on their feet, relates to others — it lets us “get to know them.” What we’re seeing more and more of, in some ways, is a sharp division between those two — people who need to see policy articulated, and people who want to see how their candidate performs on “character” (or a similar vague word) but don’t particularly value policy articulation or the failure to do so on a public platform (see: the people now saying, in defense of Gary Johnson, that “lots of people don’t know what Aleppo is.”).

In light of this, while it’s tempting to believe that the same tactics we’ve seen from Trump in almost all appearances so far — misdirecting so as to refuse to answer the question, changing the topic, claiming the answer to a question is “secret,” and so on — will make him seem obviously buffoonish when compared to an experienced politician, it may not work that way. For much of his target base, making ad hominem attacks and vague references to secret plans instead of actual policy recommendations isn’t a turnoff; on the contrary, it confirms their vision of Trump as a tough, take-no-prisoners maverick. How to effectively address that as his opponent in a debate? Who knows! It’s all a nightmare mystery, in short, and we’ll find out a little bit more together on September 26.