When Apple released iOS 8 in September, it introduced a new native application called “Health.” Health gives users the options to log their medical data, including weight, medications, blood type, allergies, heart rate, blood sugar, cholesterol, sodium intake, inhaler usage… the list goes on. It’s also designed to work with other health-related apps, like Lose It, Map My Run, etc., so all your health data is compiled in one place. On the introductory page for the update, Apple touts the app as life-changing, disruptive. In their own words, “It just might be the beginning of a health revolution.” But there’s one set of medical data that Health doesn’t account for: menstrual cycles.

Much has been made in the time since its release about Apple’s decision to omit menstruation from the Health app. Personally, I’m both disappointed and unsurprised by the choice. It’s not as though Apple doesn’t have any menstruating people (or those who know them) on staff who could have brought this up, you know? So it was clearly intentional, and that sucks. But hell, why should we sit around and wait for them to fix it? There are already plenty of apps out there that allow people to track their periods, and if Apple wants to ignore them, screw ’em. Let’s support the apps themselves, and let Health languish as those of us who menstruate look elsewhere to monitor one of our biggest health variables.

The following apps are ones I’ve used or heard good things about from users. They range from basic calendar programs to advanced, fertility-and-symptom-tracking systems. If you use one that’s not listed here (or if you’re an Android user who has an option I can’t access), let me know how you like it! I’m always on the lookout for apps I’m worried coworkers will find and judge me for when they borrow my phone to make a call. 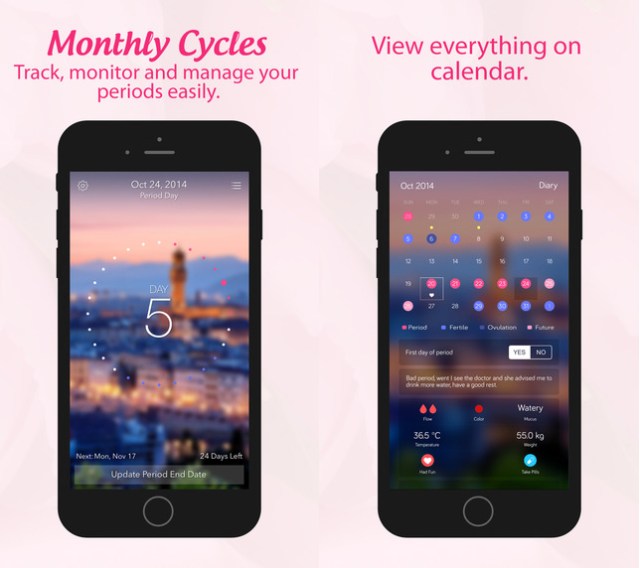 This is the app I use, and I love it. I’ve stuck with it for a long time, since it was no more than an ugly little flowery thing that made me feel weird about not wanting to be pregnant. But gone are the days of pink flowers and janky animation, and an embarrassingly obvious app icon that I chose to hide away in my “Misc.” folder three swipes from my main home screen.

The updated M. Cycles is beautiful and only lightly feminine — only one of the preloaded skins it offers is pink — and it’s found a way to simplify logging all the symptoms that come with having a period. It really packs a lot into a simple three-swipe interface, which is especially impressive compared to its old, nearly unnavigable design. Like most of these apps, it uses past cycles you’ve logged in order to predict your next period, and if you want, it will tell you about when you’re ovulating, allow you to log all the important factors for trying to conceive, and go into “pregnancy mode” after conception. But my favorite thing about M. Cycles is that it doesn’t feel weird to not use those options; they’re there regardless, but the design doesn’t constantly prompt you to use them. As far as predicting periods, it’s not perfect, but it has gotten better over time, and even a three-day window I can expect things to get going is preferable to the “oh fuck, it’s happening” way I used to find out I was getting my period.

Like most of these apps, this one allows you to set notifications for when your period is about to start. It’s pretty handy, but I’m always paranoid someone is going to see it and judge me for… menstruating? I don’t know. I’m weird. Anyway, M. Cycles lets you customize this notification to say basically whatever you want, presumably because of the aforementioned privacy issue. As a mature adult, this is what I’ve set mine to: 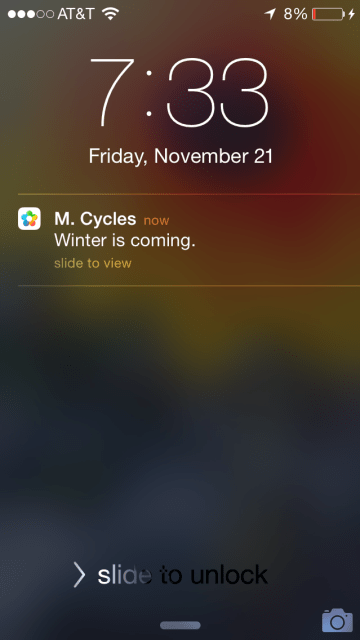 My second choice was “The king rides for Winterfell!” 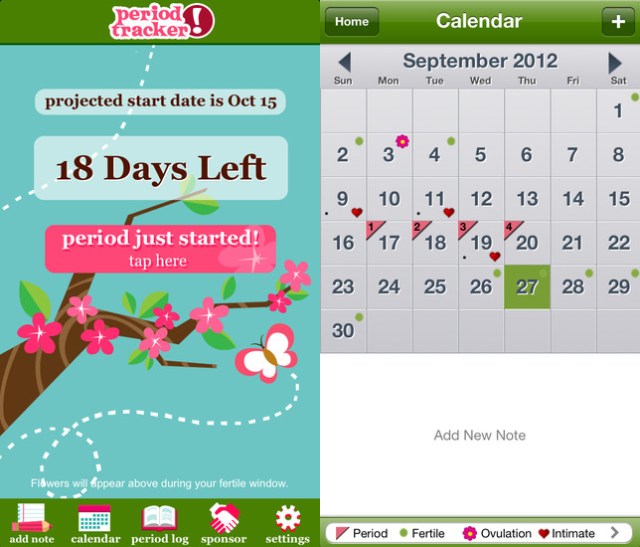 P Tracker Lite was actually the first period app I tried, after I saw it on a friend’s phone and got curious. It has all of those flowery things I hated about the early M. Cycles app, which is why I quickly moved on to something new when I started using a period tracker with any regularity. However, it is a decent free app that has improved since I used it, and the free version isn’t lacking anything as far as I can tell. You can use it to track the usual symptoms (acne, cramps, bloating, nausea, spotting, breast tenderness, etc.) as well as your moods, weight and temperature. If you’re trying to get pregnant via sexual intercourse (or otherwise have an interest in tracking that sort of thing), you can tell it you’ve been “intimate today.” It will also give you charts compiling the information you’ve logged and allow you to set a passcode for security purposes. It’s less intense than other apps, allowing even the laziest among us to keep track of periods without too much pressure. I can laud it for that, even if, personally, I’m put off by the super playful design. 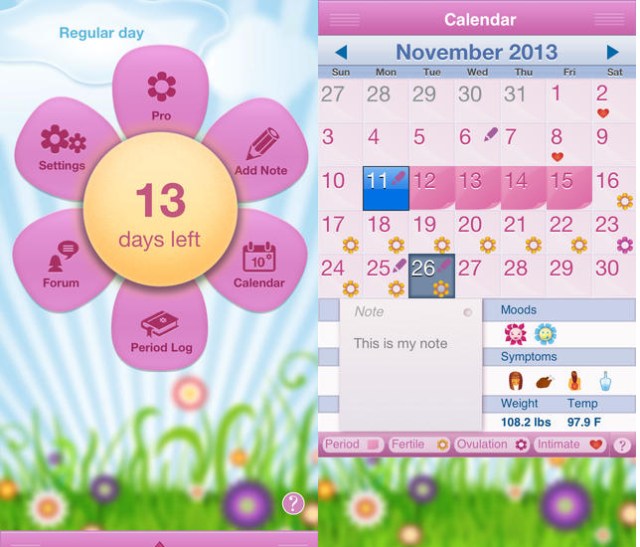 Period Diary was the second app I ever used for period tracking, and I stuck with it for a while before switching to M. Cycles on a whim. As you can see, it is quite literally really flowery. That did bug me at first, and it’s part of why I eventually decided to find a new app. However, I used it for as long as I did in part because it felt more mature and scientific than P Tracker, despite the flowers. It is also a little easier to use.

Period Diary offers the same basic functions as P Tracker, including the option to track your moods. Despite the flower being its main motif, it does have a few different color schemes you can pick. Unfortunately, I found it to be not super accurate in predicting my next period, and the reviews I’ve read seem to agree with my feeling that it was not very easy to navigate. I would generally just tap a petal on the home screen and hope that it took me where I intended. That frustration led to me not using the app super reliably after the first few cycles, and eventually not at all. 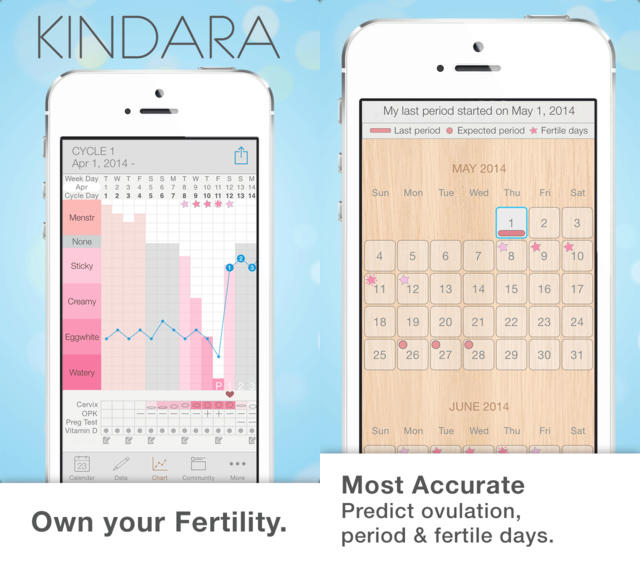 Kindara is one of the highest rated period trackers out there. Reviews talk about its accuracy, design and ease of use, particularly when used for conception purposes. But that emphasis on pregnancy makes it a little off-putting for me, who neither wants nor really has reason to think about conception right now. I don’t want to “own my fertility,” so much of Kindara’s highest rated options aren’t really of any use to me.

That said, Kindara does take period tracking super seriously. If you’re tracking menstruation for medical reasons, even non-pregnancy-related ones, it seems like a very trustworthy tool for that purpose. It allows you to input your own custom data and creates a truly awe-inspiring chart of that information that you can export for yourself, your partner or your doctor. It has a community feature where users share their updates and bond over their conception and pregnancy milestones, which I think is just cool as hell. Overall, Kindara comes across as a program made by and for menstruating people, taking their concerns into account and respecting how seriously they take pregnancy. 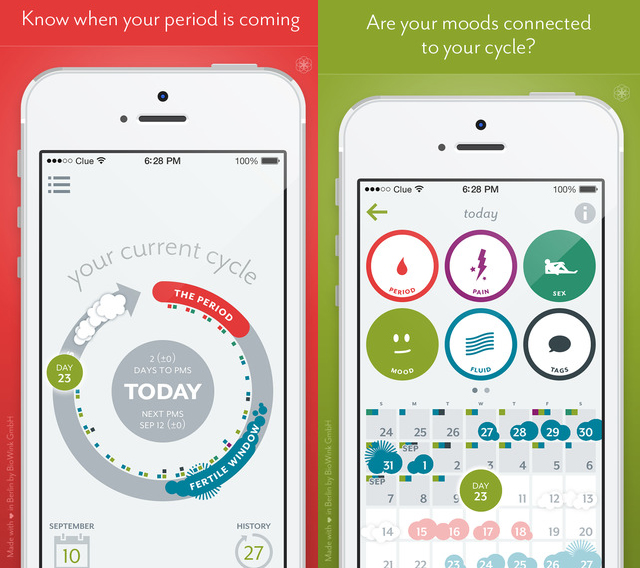 Clue was recommended to me by a fellow Autostraddle staff member, and in the short time I’ve been using it I’ve become a little obsessed. I haven’t totally switched over from M. Calendar yet (partially because I don’t have the patience to manually input all my old period data into a new app) but I predict that I will eventually do so. Because seriously, look how beautiful this thing is! It’s by far the least frilly design of any tracker I’ve tried, with a color scheme that is thoroughly neutral and a cloud motif I just can’t get over. Unlike P Tracker or Period Diary, Clue treats me like an adult; unlike Kindara, it doesn’t just treat me like a mother (or a mommy-to-be). It’s a little fun, a little serious and a lot informative.

Clue will track all the aforementioned data and predict up to three future cycles. What’s more, it allows you to drag and drop the various tracking widgets you see in that second screenshot, which means you can front-load it with things you care about and virtually hide the ones you don’t. You can customize tags, which is basically adding other symptoms you want to track that it doesn’t have a full widget for, and view your cycle history in the most compact format I’ve seen. All along the way, you can consult that little “i” in the top right corner for an explanation of what you’re seeing, complete with citations. 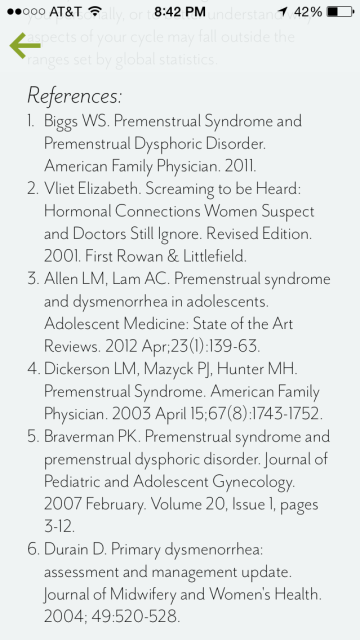 To me, Clue combines all my favorite things about period tracker apps and subtracts (or allows me to subtract) the ones that aren’t currently relevant to my life. That amount of control and respect is so refreshing, it’s pushed Clue to the top of my list. I bet you’ll find the same thing.

So what are you using to let you know when your winter is coming? Please let us know in the comments below!

This has been the one-hundred-fifth installment of  Queer Your Tech with Fun, Autostraddle’s nerdy tech column. Not everything we cover is queer per se, but we talk about customizing this awesome technology you’ve got. Having it our way, expressing our appy selves just like we do with our identities. Here we can talk about anything from app recommendations to choosing a wireless printer to web sites you have to favorite to any other fun shit we can do with technology. Header by Rory Midhani.