Oh sweet humans, hello. If you’ve been keeping up with these recaps, you already know that when nothing overtly lezbiqt happens, the Grey’s recaps don’t happen. I mean, do you really wanna sit through me explaining medical procedures by connecting them to the Illuminati and cyborg biker gangs? 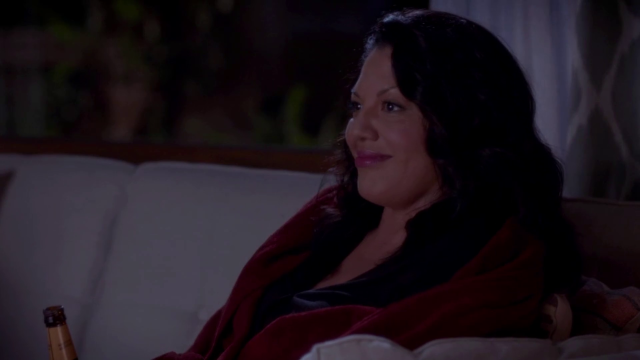 So I queef, yeah, just keep it on the down low.

So about last week, the gayest part of it occurred at the very end of the scene. We will start there. Cool? Yup. 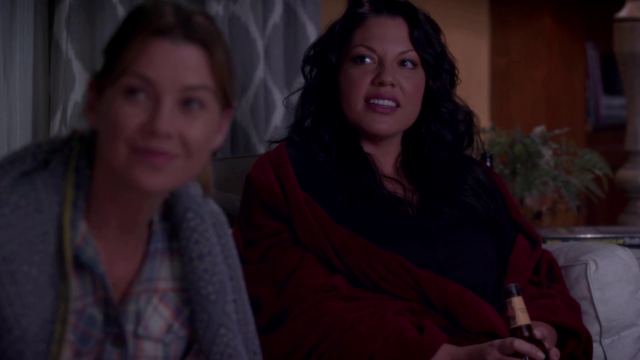 Oh yeah, I banged Karev a couple of seasons ago. Ay.

After an episode dominated by surgeries and doctoring, Callie and Arizona finally had a drama filled moment of Univision proportions. Minus the slapping, of course.

Callie sits with Karev, Pierce and Meredith in the house that Ellis Grey built. They’re drinking beers, and reminiscing about all the ways they’ve all had sex with each other. Nothing says friendship like recounting smash sessions. It’s all raindrops on roses until the doorbell rings. Who could it be? 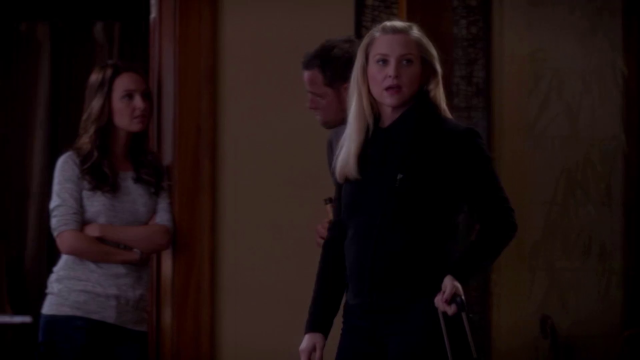 Damn, I know that queef.

It’s Arizona. The dreamgirl. She’s standing in the rain waiting to be loved. Can we all run to the door and love her together? Karev lets her in and it’s awkward. Everyone looks from Callie to Arizona and back again. 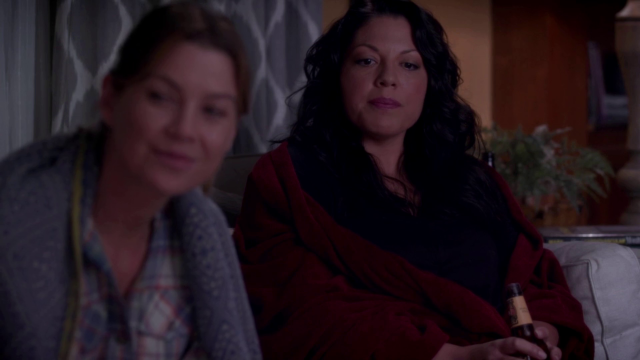 Damn, none of you knew my ex-wife was ’bout to roll up? 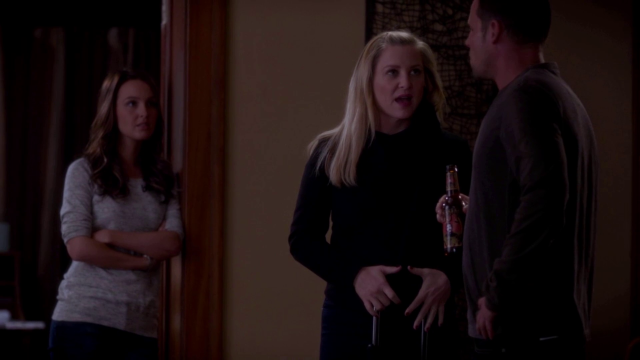 Dude, you said she was cool about weed stuff. And I’ve got a fat bag on me and now shit is just kinda weird.

At some point in the series, everyone who’s been a doctor at Grey-Sloan Memorial has lived in that house, now it’s Arizona’s turn.

Welcome to this week where just enough gay happened to justify a recap!

We begin in Callie’s Laboratory where trials for her Robo Leg are underway. 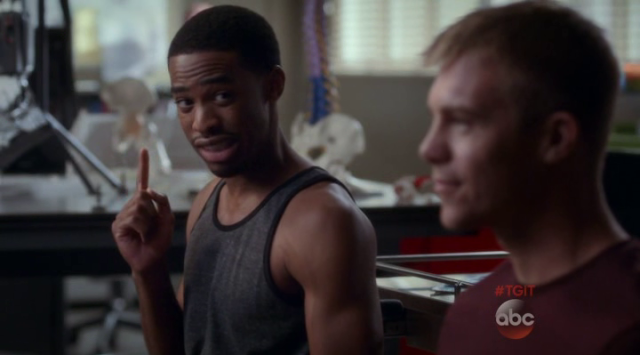 Dude, just because she’s bisexual doesn’t mean she’s gonna cheat on her wife with you. That’s just a malicious stereotype that needs to be smashed and really it’s just fucking rude.

She pits two American soldiers against each other in the most epic video game challenge ever. Winner gets the Robo Leg. 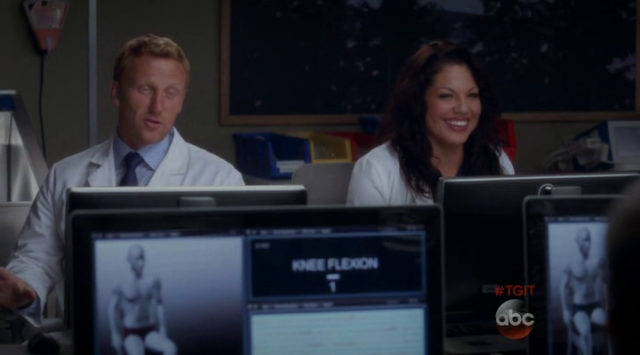 He’s so getting the Robo Leg.

The loser has to spend the night patting Dr. Ginger Spice on the head while telling him what a good boy he is. Owen is a needy bitch, y’all.

Flash to the hallway where Dr. Geena Davis is on the move to her next surgery, stuffing chowder banana flavored ice cream into her mouth. Cuz fuck not eating weird shit when you’ve only got six months to live. 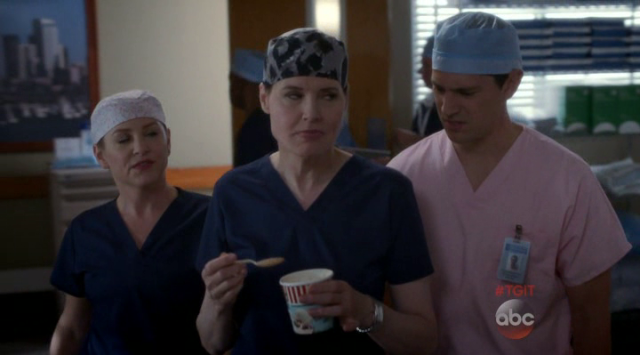 When you buy something nasty on purpose so that no one else eats it.

And yet, Arizona decides that today’s the day she’s gonna be all up on Dr. GDs ass. Like a side chick trying to gain some leverage, she’s asking way too many questions about Dr. Geena Davis jr.’s personal bizness. Homegirl just wants to eat her damn chowder ice cream, shit. But Arizona won’t leave well enough alone. 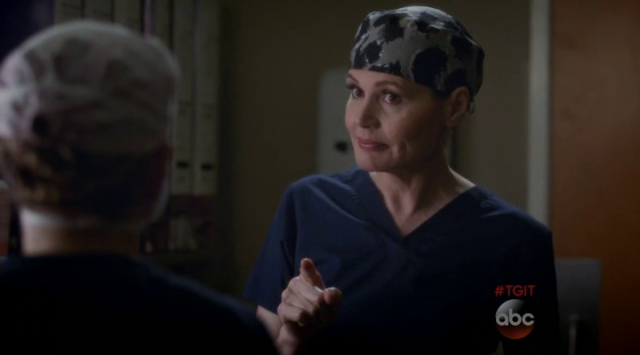 All I’ve ever needed is one finger to please anyone. Until you learn the one-finger-pop procedure, you’ll never do it like I do it.

So, Dr. Dottie Hinson pulls out a switch she found on her way to work and shakes it at Arizona. There’s no time for fun and games, she uses it to shoo Arizona away from the surgery. Arizona needs some time to think about what being a good sub means.

And we’re back to American Gladiators: Soldiers edition. 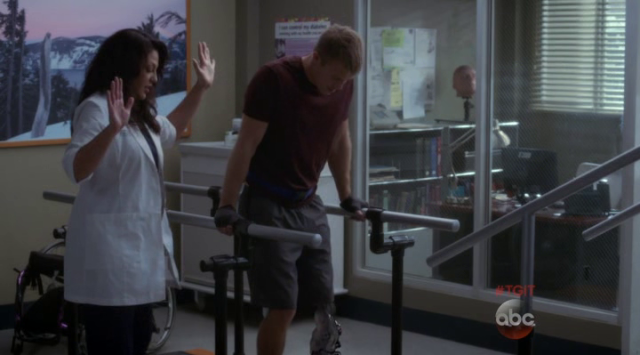 The winner of the challenge straps on the Robo Leg, does a few backflips and some breakdancing. But he’s going too fast, spinning way out of control, and meets the end of a metal pole with his skull. 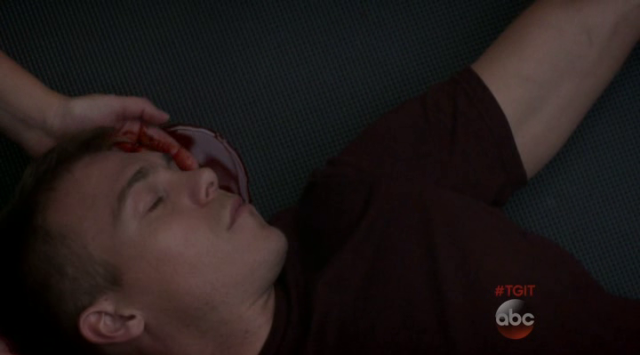 Now you know there’s gonna be a sequel, y’all.

Owen blames Callie’s bloodlust for the soldier’s injury. Owen is a blamer mansplainer. 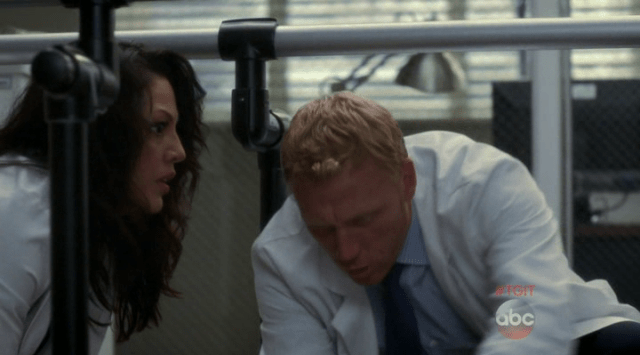 If you had just let me guide you into the space, you wouldn’t have hit the curb, Callie.

We find Arizona hiding in a closet somewhere making phone calls to Dr. Geena Davis’s other hospital. She wants to know how serious her brain tumor is even though she knows that Dr. GD has only six months of life left on this earth. 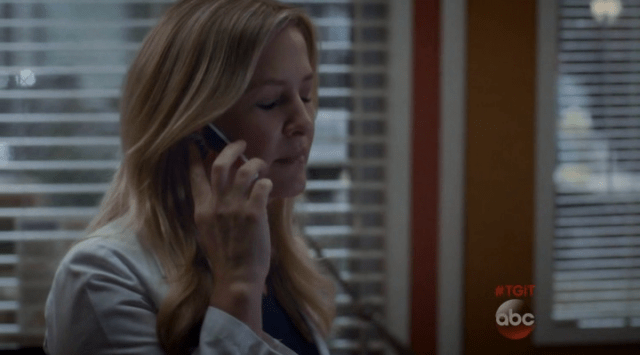 Lesbian Jesus, give me the courage to divorce my wife even though I still love her, we share custody of more than one animal, and our child’s name is a combination of both our names. Also, please make sure that in the end I get the dog and the Subaru because fuck that cat.

Goddess help Callie if she finds another lady-friend because Arizona will be callin’ round to her job and her mother’s house, creating fake FB profiles etc trying to get dirt on her. 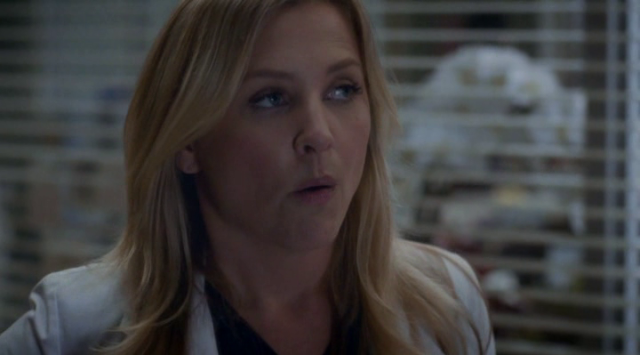 It’s been almost 35 minutes since my last safety meeting. Time to get my mind right.

And like a clueless abuelita, the other hospital gives Arizona all of Dr. GD’s charts. No red tape. Nothing. Here you go. Thank you. Come again.

Let the record show that Dr. Geena Davis has a giant brain tumor.

Damn is it warm in here or is it just Dr. Ginger Hunt blowing hot man air everywhere? If you said hot man air, you’d be right! 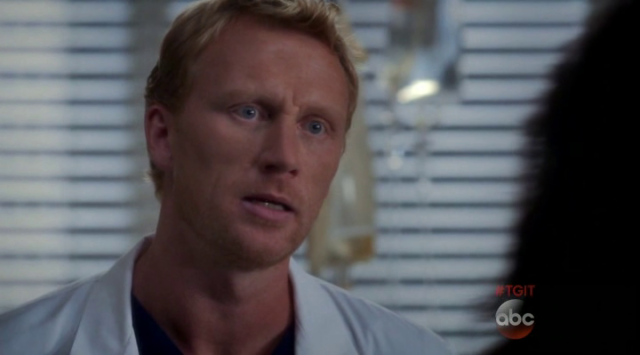 But I’m a man, Callie, and obviously that means that whenever you’re doing something, I need to weigh in, and whenever you mess up, I have to show you the error of your ways. Because without men, women would just be fumbling around in the atmosphere, cold, confused, and unable to change the tires on their cars. And without the hot air coming out of my mouth, you would freeze to death.

We’re finally at the part in every episode where Callie gets either scolded or aided by one of the manly men of Grey’s. 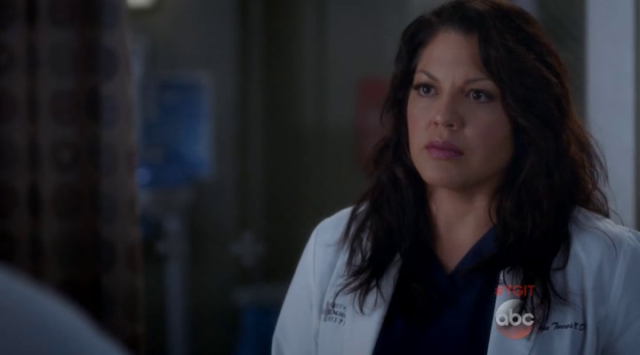 Cue 90s reggae air horn. Champion lover no ease up tonight. Forget banana chowder. Dr. GD wants the D. So she looks around her Fellowship, sees that Graham has a D and jumps on it. Bad Girls Club forever. 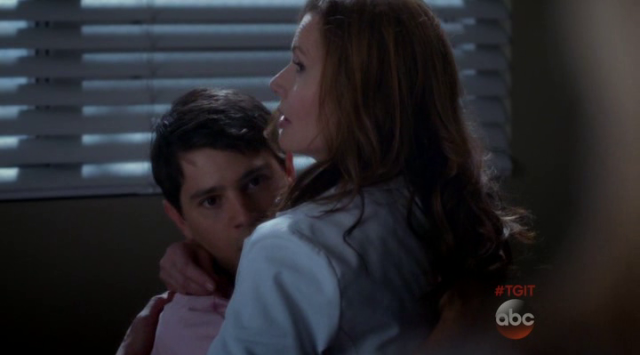 Ride it, my pony. My saddle’s waiting, come and jump on it.

Arizona catches them in the act sweating up against the radiator. Hospitals are where all of the sex is happening y’all.

Unless you’re Callie and Arizona; then you’re not only never having sex but you’re actually having the worst day ever. 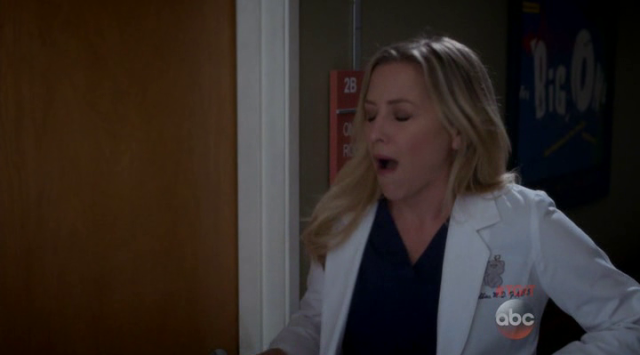 That face when you catch your parents f*cking in the kitchen.

Callie sits alone on a chair in the Vestibule of Sadness. The weight of the world’s oppression and Robo Leg injuries weighs heavy on her shoulders. She is hunched over as a river of tears pools at her feet. She may dive in. IS THERE ANYBODY OUT THERE? 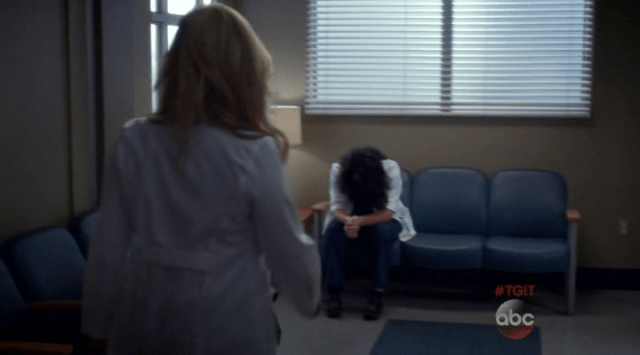 Arizona’s there. She cares and asks Callie: 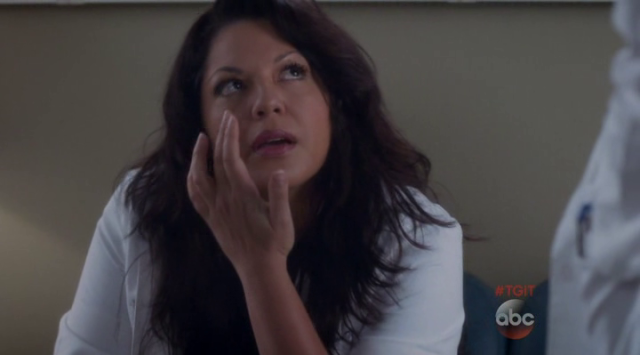 So like I auditioned for the role of the mom on Jane the Virgin, pero like, I didn’t get the part so…

And there it is. Everyone will be ok. But they’re still wives, and shit is all fucked up. So Arizona wishes upon a gay star and the time-space continuum pauses just for her and in this moment, y’all everything is as it was before. 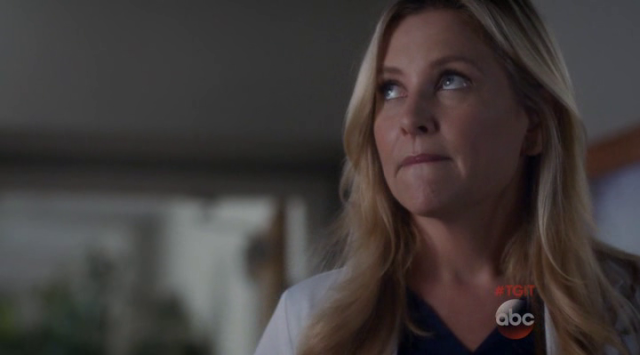 They sit together, drama-free, for just a second. They’re still wives. They’re still human beings who need love and a break from the shit storm. Arizona reaches out into their hopelessness and asks:

Could we just pretend that everything between you and I is ok? Just for a little bit? I could use that.

Arizona, I will play any game of pretend that you need because my heart is yours until the end of time. No, that’s not Callie, that’s me. Callie sucks in a few tears and allows Arizona to take a seat next to her. 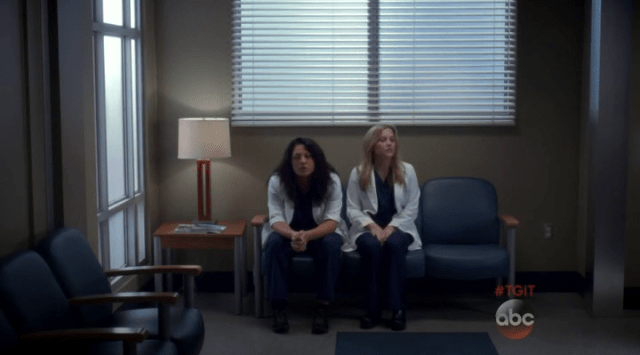 Arizona to Callie: I feel like everything is going wrong and I have no idea what to do about it.

Callie to Arizona: I feel like every single thing I’m doing is wrong.

Instead of embracing her wife with cariño, Callie pats Arizona on the leg and once again tells her to buck up, she’ll figure it out. Arizona agrees and tells Callie that she too will figure it out. 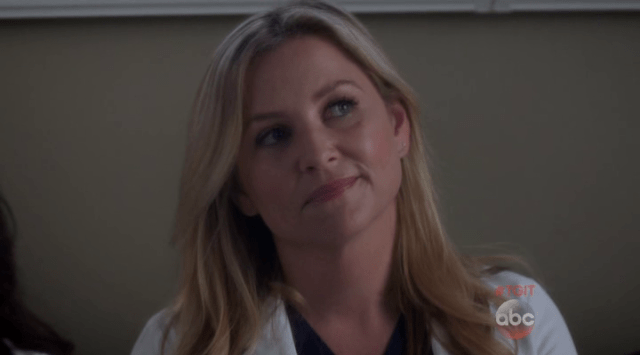 I just need to channel the Power of Taylor Swift.

Arizona gets up to leave and then she does that thing that beautiful brokenhearted fools do. She asks that one question that has the power to level us, strip us of our dignity. 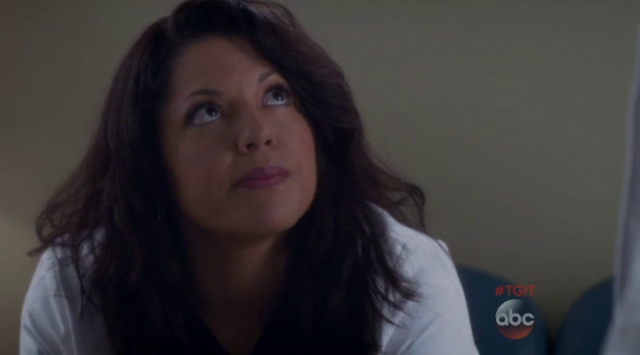 I also miss our imaginary child and feeling like a human being, so like… what’s your point? 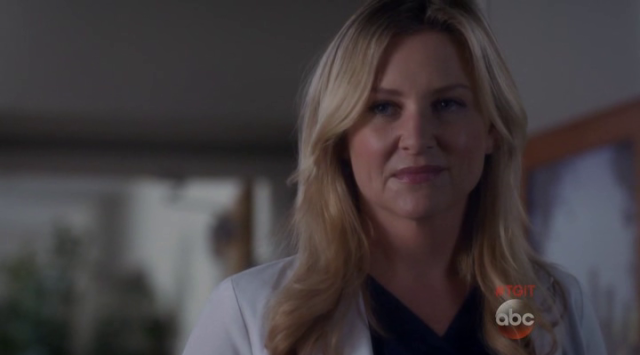 It’s cool. I’m just gonna throw on some old school Mary J. Blige and get my Waiting to Exhale on so watch out for your car and shit.

Arizona doesn’t crumble or melt into Callie’s arms. Her response is the epitome of knowing someone so deeply, knowing them in the way where the brutality of their honesty is a secret they keep but you know where their heart is and what they’re thinking, so you know what they want to say to you but never will. You know they’ve already gone before they’ve even left. Arizona is on this level of knowing Callie. 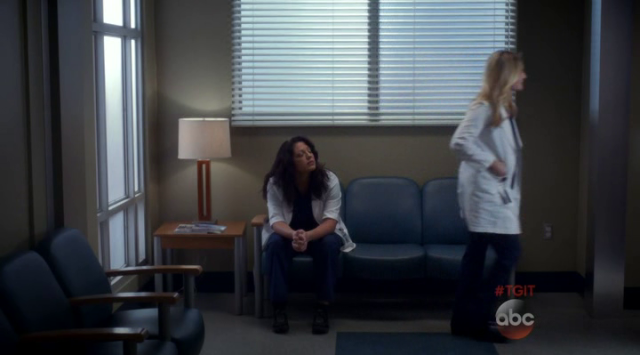 Does every relationship involving two women on a network television show always end this way?

No más gay in this episode. Til next week y’all.

PS – There will be no Owen/Callie sexing. It seems more likely that Dr. Amelia Shephard will be getting that Ginger D soon enough.

Ay, tell me things y’all. Uplift my weakening spirit and tell me about the things that keep you going. I want Calzona to survive because I want to believe in marriage and vows and love and shit. What are your thoughts? How do we move forward? And also, just outta curiosity, which chica would you wife up? Does Arizona make your bits tingle or is Callie the Mega Babe Bisexual Badass of yer dreams?