From 1986 to around 1994, Spy Magazine skewered the New York City media and political scene and often exhibited a special focus on real estate developer Donald Trump. See — before Trump convinced millions of people he could be president, Trump regularly convinced people with millions of dollars that they should give their money to him. This was, generally speaking, bad advice. Spy Magazine’s investment in regularly exposing Donald Trumps’ ridiculousness inspired Esquire to launch a SPY Magazine pop-up on its website during the election, with posts from Spy co-founder Kurt Anderson and former Spy contributors like Nell Scovell and Bruce Handy. If you’ve never heard of Spy, than knowing that Spy definitely inspired Gawker might give you a reasonable idea of what it was. (I also recommend Spy: The Funny Years, which is practically free because nobody but me cares, apparently.)

The entire Spy Magazine archives are available on Google Books, though, and a nice breeze-through of Trump-related search results isn’t an entirely insufferable experience. (Spy Magazine was definitely one of Gawker’s formative texts, and we see how that turned out.) A lot of old Spy articles are, well, prescient. Like this one, which takes the mainstream press to task for not aggressively fact-checking his proclamations of wealth/worth and thus dooming the investments of so many media consumers. Or, you know, this one: 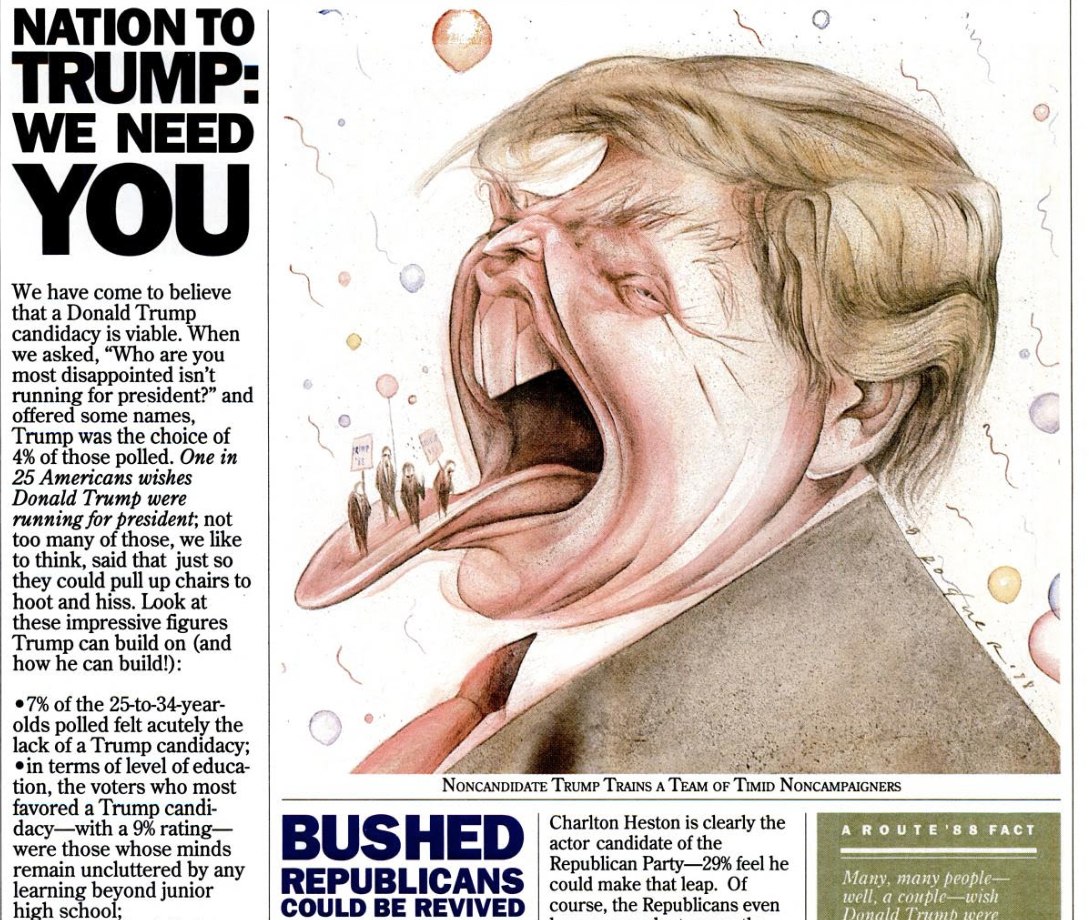 But Spy Magazine really excelled at Trump-related insults. This listling contains just some of many, ripped mercilessly out of context for your enjoyment.

9. “…Trump may have been the punchline of most of the jokes told by the swarm of aging, bad comedians at the party (“Marla, you picked a loser!” said Pat Cooper), but his short fingers were as limber and active as ever.”

15.  “The garlic. The crucifix. The stake through the heart. The holy water sprinkled on the soil from his native Queens that he must sleep in every night — evidently none of them have finished off Donald Trump.”

18. “The world’s top judge of architecture”

23. “…not just some cartoon character, a guy with a comb-over and a press agent and a board game named after him; he is and always has been a real and fairly treacherous human being.”

29.  “The very symbol of greed, vulgarity and bluster”

31. “A man of obviously limited abilities”

38. “Forget the way he has imposed upon all of us his idea of “class” — more a Dynasty notion of panache than anything even faintly evoking the uptown swagger that New York epitomizes. Forget his noxious tactics with tenants he wishes to evict. Forget the sheer cheesiness of Trump Tower, Trump Plaza and his casinos; forget the way he seems to have the Times in his back pocket; forget the hustler-on-his-best-behavior manner. In fact, forget just about everything concerning Donald Trump except the stupid things he says.”

39. “The epitome of Roaring Eighties-style excess”

40. “Our very own Queens-born megamillionaire”

44. “When a member of Oprah Winfrey’s TV audience had the temerity to ask them about 20/20’s report that Donald only spends four to six hours a week with his children, he responded, “I would say that I spend enough time with the children. I think they’re pretty well covered.” Hear that, naysayers? They’ve got the kids covered. No problem. And we’ll bet those four, five or six are super-quality hours. With top kids.”

45. “Capitalist Genius and Creator of Wealth”

49. “When another guest ribbed Trump about his threatened presidential aspirations, the Queens-born casino operator replied, “Look, would you run for office if you paid almost no taxes last year? Like, duh… we’re sure he was just kidding.”