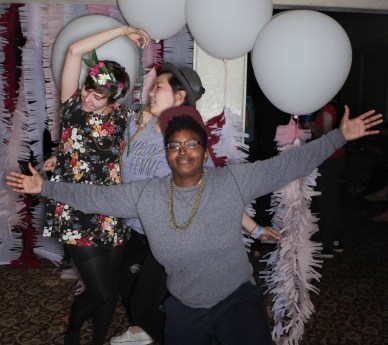 who let these people in

It’s that time again — the time of year when I gather four cups of those sweet little figs, a gallon of your least favorite brand of coconut water, a modest stack of shredded Whole Foods make-your-own-burrito forms, a lock of Julia Nunes’ hair, a single serving of Bikini zone, a chunk of astroturf from a homoerotic Olympic event, the eggs you froze to make a baby and, from this magical combination of ingredients, I produce your June A-Camp CABIN ASSIGNMENTS! (ETA: within the next 7-10 days.)

This year, as in last year and the year before, I gave you a chance to describe yourself when you registered so that I could try to put you in a cabin with other humans who are exactly as weird or as interested in Game of Thrones or “cuddles” or whiskey as you are. It’s not a perfect process — and this year we’re throwing in another element to the cabin game that’s made it even more challenging — but I think I get it right about 65% of the time. This year will be no exception. I think most of you will have a very good time.

So, here are some sentences from your descriptions of yourselves, ripped mercilessly out of context and placed here, in this list, for our communal entertainment and delight.

1. A-Camp seems like the perfect place for me because my gaydar sucks and I have a lot of feelings.

3. Sam Adams is the only boy who will ever touch my heart.

4. I’m a Latina speaker, educator, and budding therapist who wields words and mink jawbone earrings to strike fear into the hearts of oppressive jerks.

5. I can and often do go on tangents about the models of disease causation and the importance of the biopsychosocial model of health.

7. I enjoy owls, oxfords, ties, and organizing cupboards and closets. I struggle with washing silverware. FORKS ARE HARD.

8. If I were in roller derby my name would be “Little Susi Bonebreaker.”

9. Last year I saw a HANDLE of Tanqueray Gin at Ralph’s and I’m still hoping its a thing they do.

10. I love M-Rod no matter how many stupid things she says. Grace Jones is my Goddess of worship and Faith Lehane is my patron saint.

11. I am a professional hand talker by day, and a queer space alien cult leader on nights and weekends.

12. I’ve seen Clueless at least a thousand times and can quote pretty much the entire movie. I don’t know what that says about me exactly? Maybe that I love the 90s, hanging with my lady posse, and that I would date my stepbrother (ok, definitely not that last part)?

13. I somewhat resemble the old man from Up in both appearance and temperament.

15. If sassy bunnies could copulate, I would have exploded into life as the gayest unicorn there ever lived!

16.  I once described my hobbies as drinking, going to the cinema, and drinking in the cinema.

17. I like cheese… and Alycea Arline… and sniffing all the candles in Bath and Body Works.

18. I like knitting, baking, indoor/outdoor gardening, reading, writing, yoga-ing, rock climbing and wine-sipping to a soundtrack of Beyoncé, Andrea Gibson, Prokofiev, Bach, and the original cast of Rent.

19. I come with a legitimate belief that my daily expression of science factoids brings enjoyment to the masses.

20. I am a Comanche/Mexican-American psychology phd student who identifies primarily as Ravenclaw, but with a Slytherin secondary.

21. I’m good at creating Sims households inspired by literary families, my The Sound and the Fury family being my magnum opus.

22. Growing up, I was desperately in love with both Jewel Straite circa “Space Cases” and Jennifer Lopez circa “J to tha L-O!: The Remixes.”

23. I have a huge collection of rubber duckies, and they are the only decorative items in my house.

24. I’m the life of the party when I can be bothered to attend.

25. I like scuba diving and spelunking and am 50 feet tall and have tentacles instead of a mouth. Chthonian!

26. I was on the bear team in Yosemite, so if you need help chasing bears away from trashcans, I can actually claim to be a professional at this task.

27. I dislike feet, most straight cis men, and the texture of bananas.

28. I was left in a bassinet outside the Portland feminist bookstore and raised feral by hipsters and drag queens.

29. I am a frustrated Indiana taxpayer.

30. I get separation anxiety when I’m away from my favorite beanie.

31. I do best around people who are really chill but friendly, which is probably why most of my friends are potheads.

32. I spend a lot of time trying to decide whether I’d be in Hufflepuff or Ravenclaw.

35. I AM AN AGGRESSIVELY SWEET COCONUT WHO MAKES NO SENSE.

36. I would watch Fringe and wonder how Jasika Nicole’s hair could be so perfect. And then I found out how crafty she is and that solidified my love for her. But also I’m excited to meet the other campers.

37. I was a member for a day of the Stockholm Surrealist Group.

38. I’ve been described as “Peter Pan” by some of my favourite people.

39. I have alternative hair, and it has a mind of its own.

40. On my own I have about a half hour of “meeting strangers” material, suitable for all audiences.

41. The last time I camped in a cabin was at methodist summer camp where a room of cishet girls compared nipples while I bit my hand in the corner and avoided eye contact.

42. I imagine A-Camp like The Last Unicorn; after a long stretch of loneliness, I ditch the straight world and I’m united with my magical unicorn sisterhood in an enchanted land.

43. I’ve played bass guitar since middle school and used to enjoy people’s surprise at hearing a mild-mannered half-Asian girl rock out to funk rock. Then I cut my hair and people don’t seem as surprised :(

44. I think I’m pretty outgoing by British standards but maybe only average by American standards.

45. I usually get nervous meeting new people in settings like this so I do a stupid thing where I pretend like I’m too cool for bonding activities and then people think I’m mean so I don’t make any friends and I’m sad about it. THE GOOD THING IS I PLAN TO BE AS UNCOOL AS POSSIBLE AT A-CAMP BECAUSE ENTHUSIASM IS EXTREMELY UNDERRATED.

46. Riese, I hope you are having a really nice day and are not too stressed out about cabin assignments. I’ve sacrificed a chicken to bring good luck to you in this endeavor. Don’t tell the vegans.