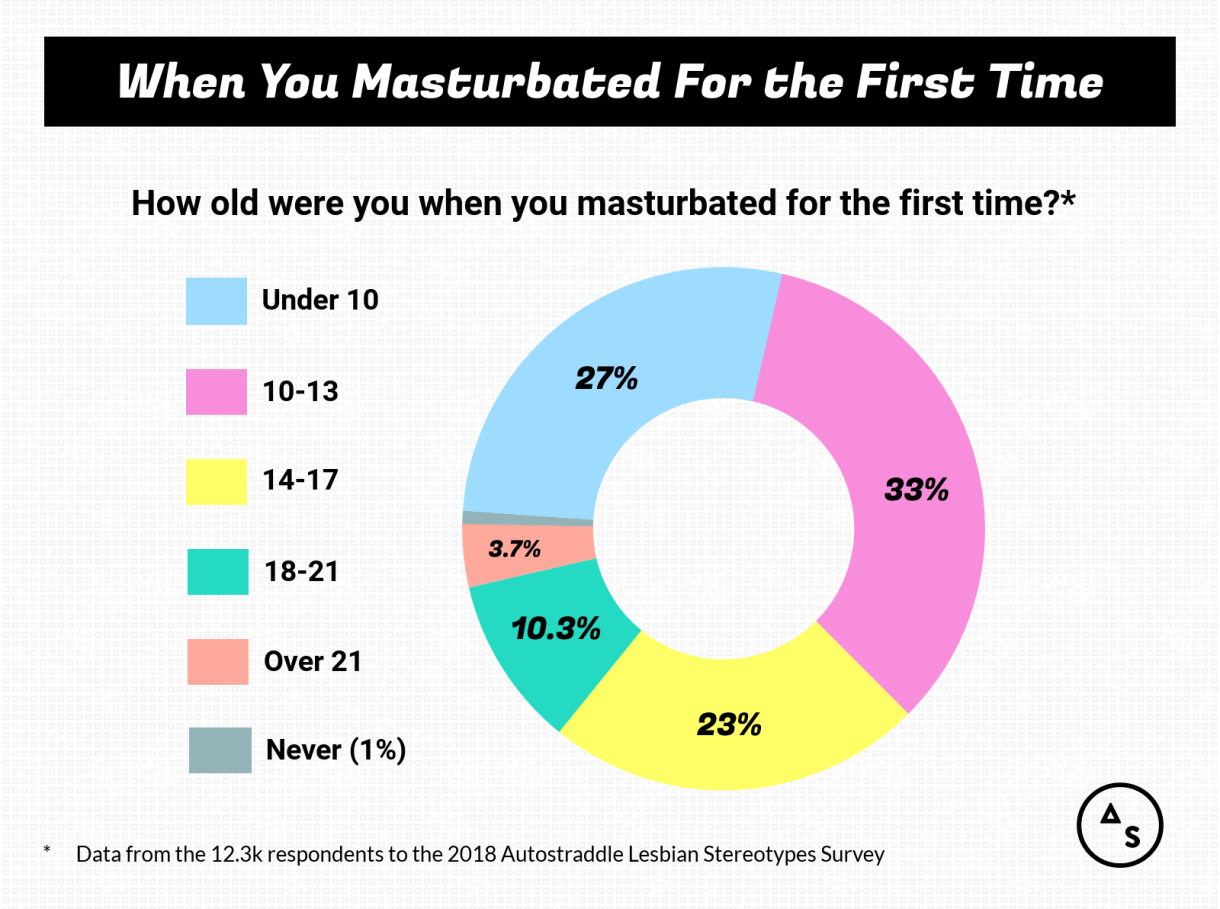 According to the University of Michigan, around 25% of girls and 100% of boys have masturbated to orgasm by the age of 15. Other research shows 95% of males doing it by age 20, compared to 60% of women. We didn’t ask about orgasm but I think the above chart strongly suggests we were getting down to it earlier than the masses.

1. Probs I got started in the womb

2. oops and it was because i was attracted to barbie’s sister skipper

3. …at that point, after a long period of occasional embarrassed Google searches to figure where exactly everything is down there (thanks, Catholic sex ed), it was a revelation, let me tell you.

4. I was afraid to, but once I discovered it, justifying it would help me someday know how to have sex, I had a new hobby

6. …and it was to thoughts of Wonder Woman

8. i thought that the clit was the vagina oof

11. It was mind blowing and I had no idea what was happening and couldn’t believe no one would have told me about this if they had known it existed

13. My mom had a Hitachi I think? My older sister and I both admitted to each other that we used it when we were both very young.

17. I used to spend a lot of time engaged in elaborate kidnapping fantasies

18. Shoutout to being a late bloomer and to Barbarella.

21. pool water jets are my root

23. learned thanks to f/f fanfic

24. Probably accidentally at childrens’ gymnastics when we climbed poles

26. I was 15 and I didn’t realise it was a thing until I read it on the PostSecret forums

27. I had no idea how people with vaginas masturbated. I asked a guy friend and he said they stuck two fingers in their vagina. That didn’t do anything for me so I’m like “fuck this” and never tried again. Come one night when I was 21 I had a dream where I came. And that’s how I finally discovered my own clitoris. Sex Ed people.

29. I had to read about it in a book! Probably good ol’ Judy Blume.

31. I surely do not remember, but it was a while ago. My “prefer not to say” answer just means “I don’t remember and I’m amazed that other people can.” You know what first I can’t remember that I’d like to? First pizza. That would be really something.

32. I first masturbated after watching Black Swan because it was the first time I saw it depicted and felt like if Natalie could do it, I could do it. wow, this survey is helping me get some stuff off my chest. you’re welcome.

33. I masturbated to a Girls Gone Wild infomercial on Comedy Central at like 3 in the morning when I was 11. I’m so sorry.