There were rumbles before the 2018 Oscars that Call Me By Your Name, a gay coming-of-age drama directed by Luca Guadagnino, would go the same way as The 2015 Oscar Nominated film Carol™. Those rumbles were me, and the prediction was a freeze out despite multiple nominations. That proved mostly true, and after the awards wrapped, people were crying Snub. But how snubbed was it? More than Carol was at the 2016 Oscars, which took home exactly zero wins? Let’s take a look.

Snubbed Re: Being One for the History Books

The second time there was a romance between two men that didn’t focus-focus (you know what I mean) on a woman.

The first time there was romance between two women that didn’t focus-focus (you know what I mean) on a man. 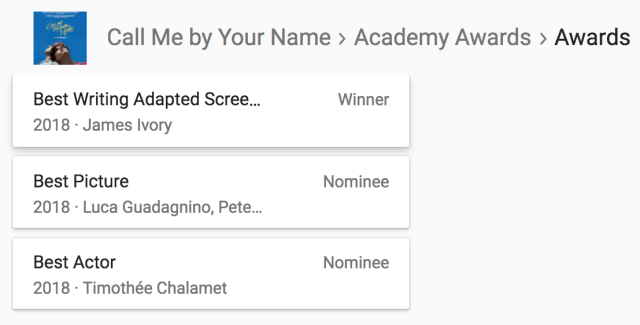 Most Snubbed: That’s a big ol’ fat Carol for you.

A green-lit sequel less than a week after the 2018 Oscars aired.

No sequel for two years and counting despite dozens of ideas and titles thrown their way.

Snubbed Re: The Actor Up-Againsts

Timothée Chalamet of rap battle fame up against an actor so talented that he had to retire, an actor in one of the best movies of the year, an actor I’m not going to give any accolades to, and a nine-time Oscar nominated, two-time Oscar winner.

Snubbed Re: The Movie Up-Againsts

I don’t know what half of these movies are, others include Leonardo DiCaprio grunting for two hours and Matt Damon in silence for two hours, and the winner was a bunch of straight people cracking the newspaper case!

By popular demand, the Call Me Your Name trailer, but i scream every word pic.twitter.com/5X2OWRcNID

Most Snubbed: Too close to call.