Yesterday, we published an article about Selling Sunset’s Chrishell Stause appearing in G Flip’s new music video for “GET ME OUTTA HERE” (the collab that started the relationship heard round the world).

A few hours later, a big, corporate-backed media company published an article under the exact same title — the only change being that the words “Chrishell Stause” and “G Flip” had been switched. This happens sometimes, because describing a music video isn’t proprietary.

But the frustrating consequence is that because they are a larger, big named publication, Google favored their title — even though ours was first by hours — and it moved us from the first place SEO, down to not even ranking on the first page anymore. What a bummer!

Moments like this really hit home how hard it is to keep independent media alive — we get overpowered even when we do literally everything right. At the end of the day, we’re only here because of readers that believe queer stories — yes, even those about extremely mindless reality TV shows — should exist and be written about by queer people who get it. So if this title mirroring kerfuffle inspires you to join our A+ membership program (which starts at only $4/month), we’d be extremely grateful!

We are not one to wallow in self-pity. Nay, we used this opportunity to turn lemons into lemonade. And when I say that, what I really mean is we used this as an impetus/excuse to make titles so outlandish that no one would EVER have the exact same one. And because we love you so much, we’re sharing those titles with you, straight from our Slack channel. 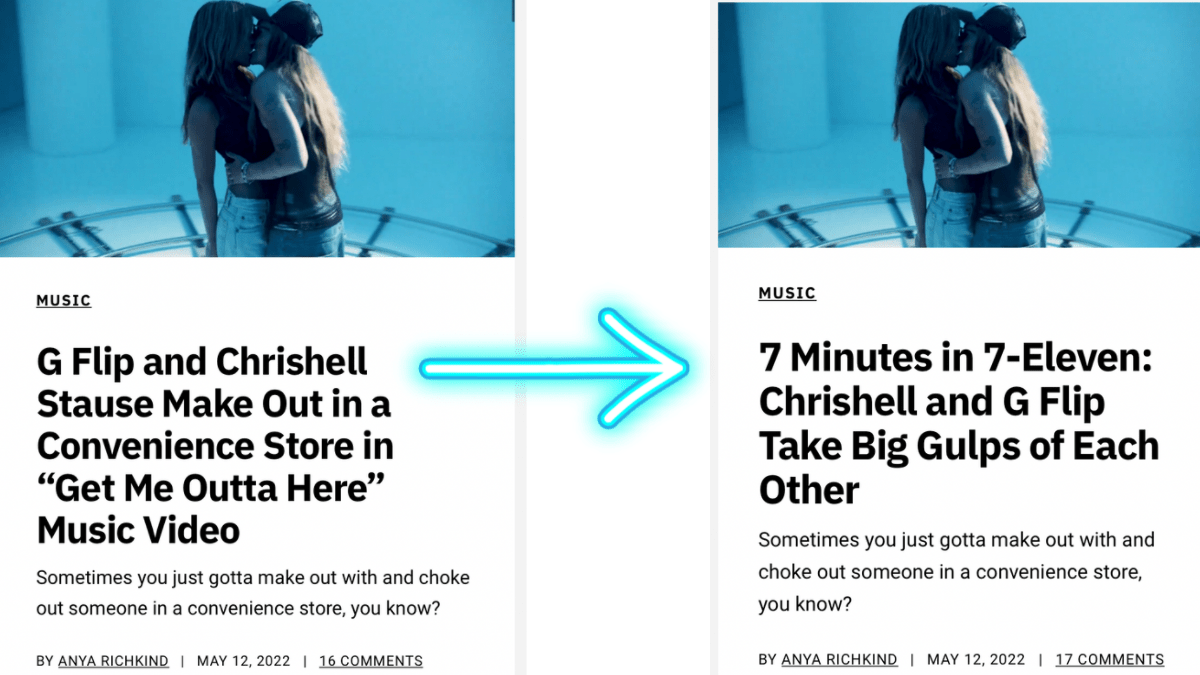 1. G Flip and Chrishell Stause Play Hide the Salami in a Convenience Store

2. G Flip and Chrishell Stause Make Out in a Store of Convenience

3. G Flip and Chrishell Stause Are Living Kristen Arnett’s Dreams By Getting Frisky in a 7-Eleven

4. Choking!? G Flip and Chrishell Get Snacks, Make Out In New Music Video

5. Choke Her? I Hardly Know Her! Chrishell Stause and G Flip Make Out and Are Dating

7. Are They Okay? Chrishell Stause and G Flip Made Out In A Convenience Store But Did Not Buy a Single Snack

8. I Just Remembered Vitamin Water Exists After Seeing Chrishell Stause and G Flip Make Out Next To It

9. Girl In Red: No It’s Chrishell of Selling Sunset Making Out With G Flip On a Couch, In 7-Eleven

10. I Bought Some of Those Energy Bars Yesterday: Now Crishell and G Flip Are Making Out On Top Of Them

11. Chrishell Shows Us How Babies Are Made With G Flip, And It All Starts In 7-Eleven

13. Chrishell and G-Flip Have Hot Sex Next To Hot Cheetos in Convenience Store

15. Cleanup on Aisle 5: Crishell and G-Flip are Making Out There And Also The Top Shelf to Their Left is Completely Empty and Needs to Be Restocked

16. 7 Minutes in Heaven at the 7-Eleven: Crishell and G-Flip Show You How It’s Done

18. 7 Minutes in Heaven: Chrishell and G Flip Slam Slim Jims at a 7-Eleven

19. 7 Minutes in Heaven: Chrishell and G Flip Slam Slim Jims and Swap Spit at a 7-Eleven

20. 7 Minutes in Heaven: Chrishell and G Flip Take Big Gulps of Each Other in a 7-Eleven

21. 7 Minutes in Heaven: Chrishell and G Flip Slam Slim Jims and Swap “Slurpees” at a 7-Eleven

Like we always say and will always say: Autostraddle is majority reader supported and we wouldn’t be here without you. That’s why Autostraddle Plus members get access to behind-the-scenes conversations like this in the monthly A+ Insider. A+ starts at just $4 a month and in exchange for supporting indie queer media for everyone, you could be laughing like you are right now, on the reg. Join A+!