[Is it Real? There seems to be some concern that this story is a hoax because most of the information in it, as initially  reported by LGBTQ Nation and Change.org, is not verifiable. It seems like a really f*cked up hoax, if so, but then again, 4chan exists.

What we have been able to ascertain is that the photo that ran with the story was not Terrel Williams — it was a photo of Donny Lumpkins, an individual who is unrelated to this story.

There are conflicting facts in this story, and we sincerely regret if there any errors or omissions in our original story. However, as of this writing at Noon PT on 10/22/10, the above sources still assert the primary fact that Terrel Williams, a gay teen, committed suicide on Oct. 13 as a result of anti-gay bullying. And if that one, and only, fact is indeed true, we extend our deepest regrets and condolences to his family and friends.

The LGBTQ Nation article includes a full rundown of what they’ve been able to figure out and is worth a read.

The only thing we’ve noticed besides what’s reported on Queerty and LGBTQ Nation is some bizarre discrepancies in the language of the email allegedly from Terrel’s alleged boyfriend sent to Queerty.

To begin with, his death is not a hoax. A reporter i had spoken too, misread what i had said and streamed across the internet that he was hear in washington, but in fact was not.

And then later, this:

I again, said on the same website, what you’ll find about me is entirely speculation and rumours.

Rumours? Odd typo for an American, and not something an American spellcheck would suggest.

Furthermore, Brianna has pointed out that it’s strange the email from Daric wouldn’t mention the fact that the picture circulating wasn’t his boyfriend. A commenter on Queerty recognizes the photo from 4chan’s “Rate My Looks” board.] 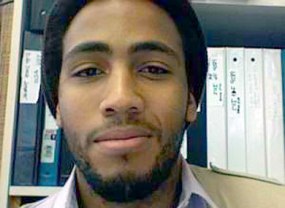 this is not actually terrel williams

On October 13th in Washington, gay 17-year-old Terrel Williams was attacked by five of his Clover Park High School (ETA 10/22 12:19PM: According to an email sent to Queerty from Daric, Terrel did not attend Clover Park High School and this was misreporting by LGBTQ nation) classmates after school. They reportedly shoved him into the wall and broke his ribs. Then Terrel went to his family’s vacation home in Lakewood, Washington, and hung himself in the closet.

His mother Cheryl Williams found his body. His death was by suicide. This is what she said on the internet:

“My son meant the world, and high school bullies pushed him over the edge. I hope and pray, that no other child ever has to go through what he did. Bullying isn’t worth it. Why can’t people just be nice?”

Terrel Williams would have turned 18 on Saturday which was also going to be the seven-year anniversary of his relationship with his boyfriend Daric. From LGBTQ nation:

The boys met and became friends when they were 10 and 9 years old, respectively. “We began as play dates, like anybody else would, and as we got older into the teen years, his parents allowed us to give dating a shot,” said Daric, who is now 16 years old.

“Terrel was a compassionate, fun loving, outgoing person who enjoyed life to the fullest,” said Daric.

“He loved life, but felt the need to take it, because [the bullying] didn’t stop … respectful, whole hearted people like Terrel, and the growing number of others, shouldn’t have to feel suicide is the answer, because bullies won’t stop.”

This is his suicide note:

“I’m sorry to my immediate loved ones, but I feel suicide is the only way out. I felt coming out, and being happy with Daric, was the best thing I could’ve ever done. But I didn’t think it would lead to my death at an early age.

“Today, was the record worst day of my life, some kids at school stole some of my stuff that I got from people I really cared about, and that really pushed me over the top, next to being shoved into a wall, and my ribs being broken.”