While many countries across the world continue to make hard-fought gains in LGBTQ+ rights, from marriage equality to employment protection, there’s one place where queer people still struggle to stake their claim: the roof. We’re used to seeing straight heroes parkour halfway across a city skyline or declare their undying love from the rooftops, while it feels like queer women are just left to their usual specialities up there: snot-filled breakups and death.

To validate whether my base assumption that we’re getting a raw deal is really true, I decided to survey the cultural landscape for all roofs where queer women have made notable appearances in film and TV. And so I present ten rooftop scenes where events ranged from actually quite good to very much the worst. Any omissions are intentional, because I love getting shouted at for missing stuff out. 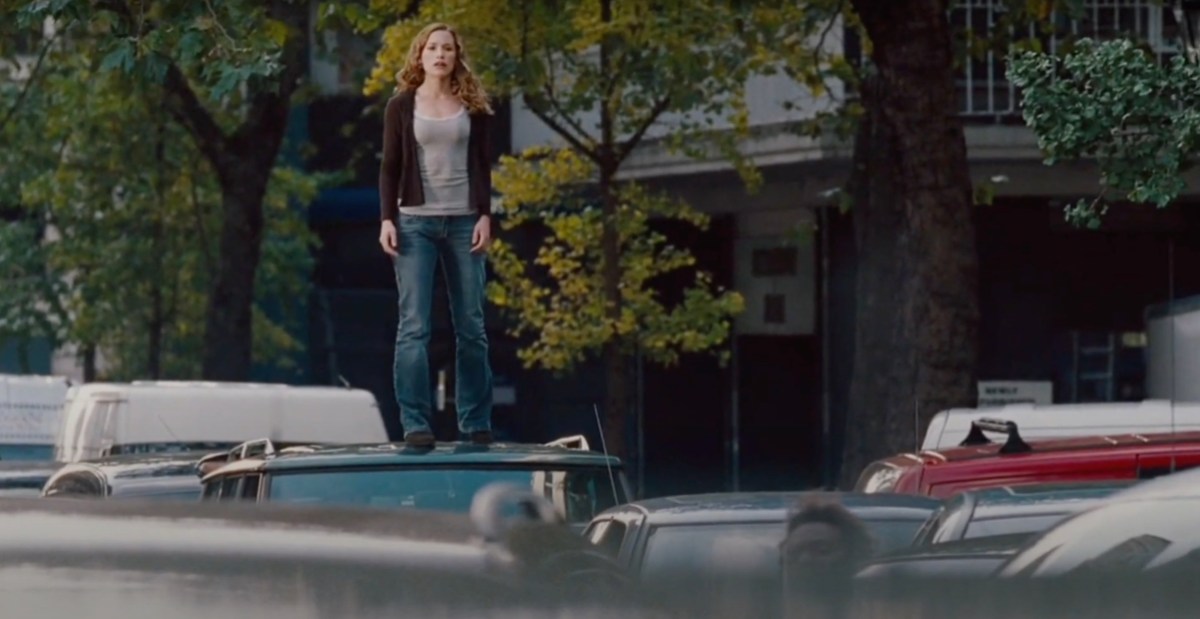 It’s a real mark of our collective queer delusion that everyone tries to forget how weird it is when serial roof marauder Piper Perabo climbs on top of her car to screech about wankers over the standstill of London traffic. We’re just overwhelmed that everyone’s alive! If you’re wondering why this list starts with the high of such an unquestionably happy moment, it’s because I want you to know how far we have to fall. 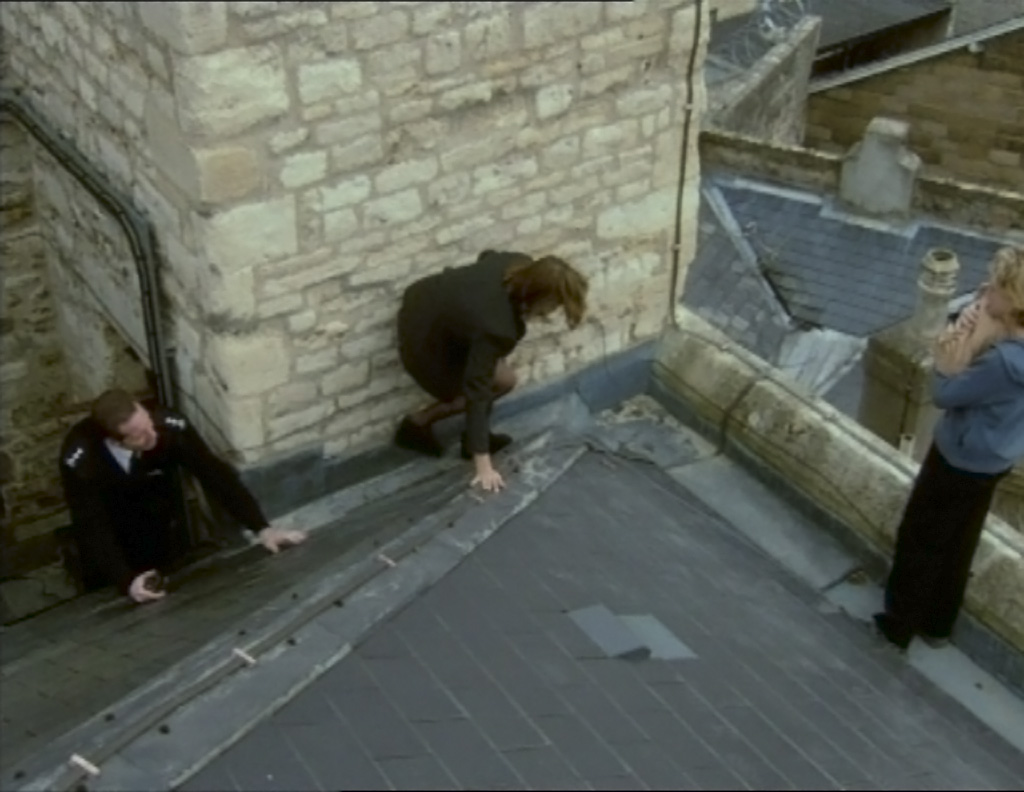 Season two of everyone’s favourite British women’s prison drama features a high stakes confrontation on Larkhall’s roof, where fearless and very attractive governor Helen Stewart heroically talks down a desperate prisoner, rescuing her newborn baby in the process. Witnessing these events prompts killer-with-a-heart-of-gold Nikki Wade to declare her love for Helen. Despite the incredibly clunky dialogue, it turns Helen gay! (eventually). It even turned Heather Hogan gay! I bet it turned you gay just thinking about it. 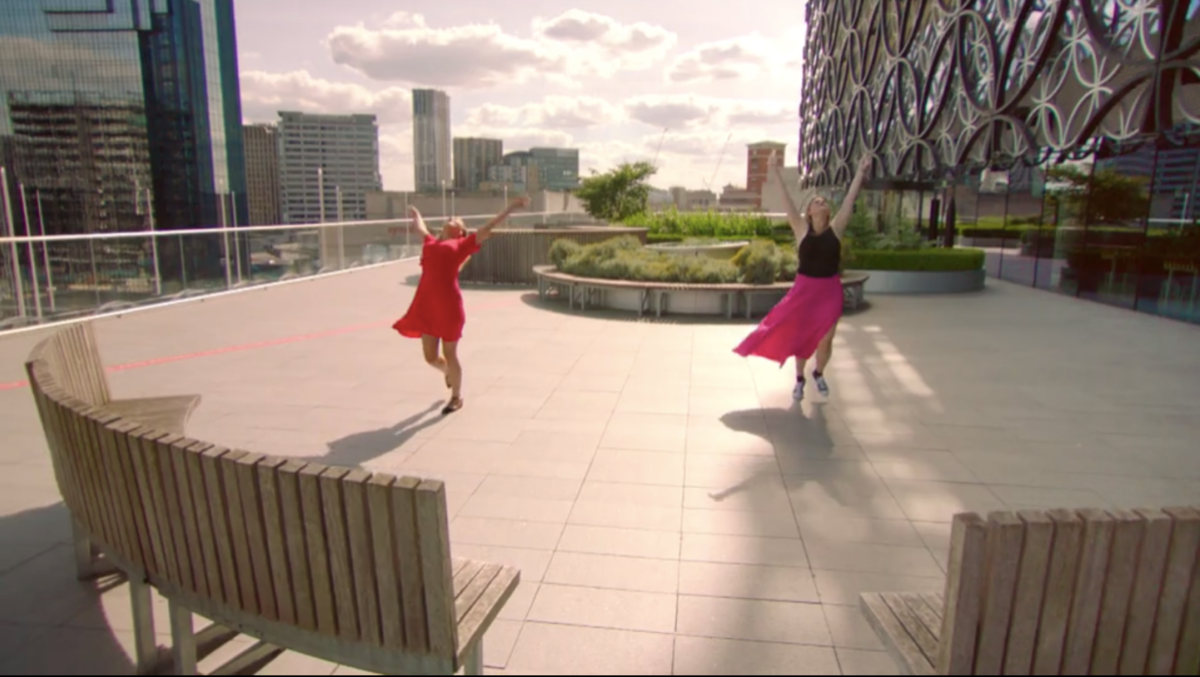 Britain’s Channel 4 has a thing about dating shows that cast aside notions of getting to know someone by boring means like, say, talking to each other. Remember, this is the channel that aired Naked Attraction where your first glimpse of a prospective date is from the genitals down. Last year saw its latest riff on the theme — a show that’s essentially a blind date where the first thing the couple has to do upon meeting is wordlessly dance a pre-choreographed routine with each other that they have spent a week practicing by the themselves while professional dancers convince them with pop psychology that this is a surefire way to romantic success.

I don’t know how it works, but I do know that it definitely did work for cute country lesbians Sarah and Faye, whose intros gave every impression they were just waiting for the right person to codependently waltz through life with. Their follow-up date by the riverside encompassed standard topics such as lamenting the lack of lesbians bars, allergy checks and long-term commitment plans, so this was a great success! 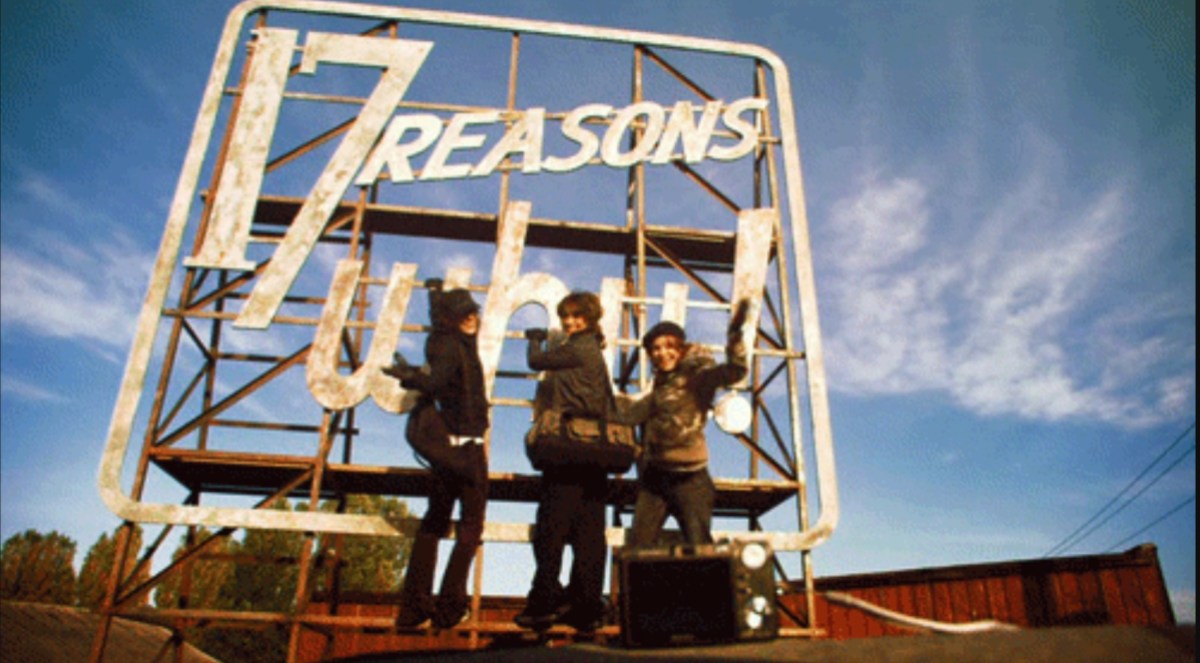 My favourites parts of The L Word are always the bits where it’s just a bunch of queer friends getting up to some antics. And could anything be more queerly caper-some than breaking into a building so you can climb onto the roof and steal a giant sign to woo back your lesbian lover (who has sensibly decided to fly across the country to flee your emotional bullshit)? This is an excellent example of rooftop lesbianism if your love language is making grand gestures and routinely denying the existence of consequences. 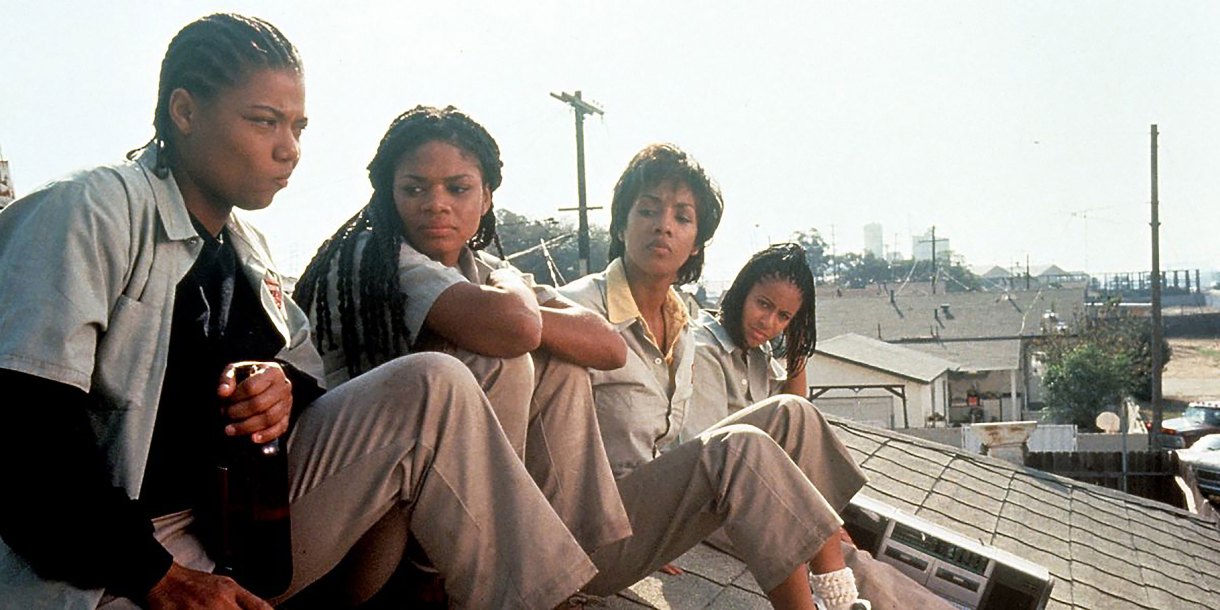 There are so many nuances to this unarguably fantastic scene as the four friends get high in every sense after an all-night cleaning shift. Yes, everyone’s laughing while they’re lamenting their shitty wages, as the idea foments that the only way they’re going get what they’re due is to take it themselves, with just enough seriousness that you can tell shit is going to get real very soon. This means not so great consequences for everyone including Queen Latifah’s iconic butch lesbian Cleo, but we can keep this little bit of happiness can’t we?! 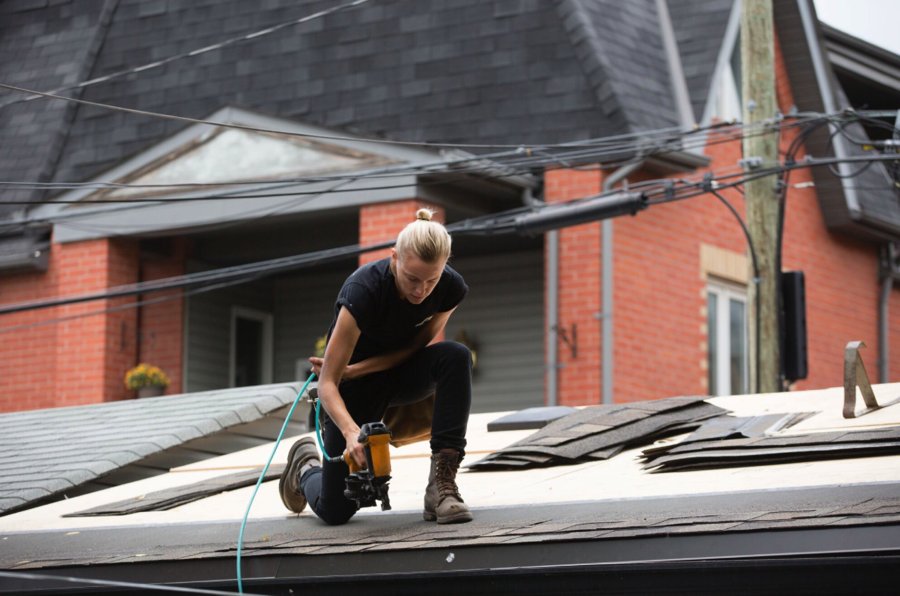 Uniquely on this list, Erika Linder’s character Dallas is actually qualified to be on a roof, seeing as she’s a roofer. I bet she even has a risk assessment! While I’d love to endorse this as positive representation of a lesbian-owned small business, unfortunately this is an example of a bad roof situation, because seeing it means you must be watching this really not very good film. 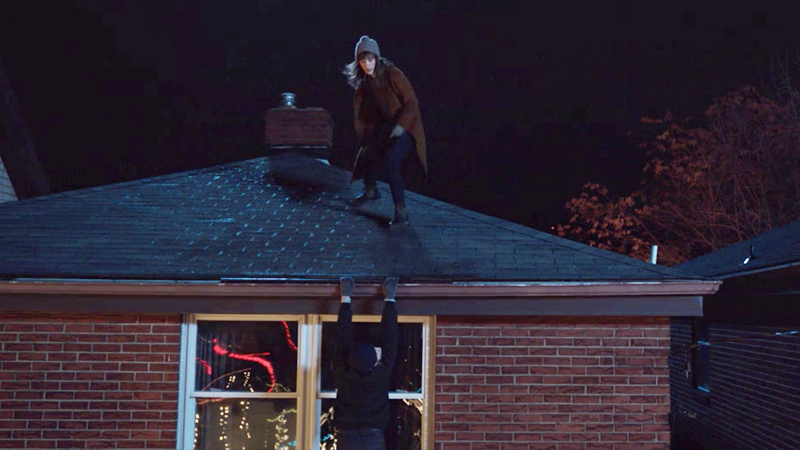 We now all realise that the rooftop incident at the start of this surprisingly divisive film is a comprehensive foreshadowing of everything to come: Harper leaving Abby hanging by herself and just when you think she might step in and scoop Abby up, she abandons her to the painful consequences. I think this is a bad time for lesbians on roofs unless seeing KStew in anguish triggers a Pavlovian response that you might be seeing Aubrey Plaza soon! 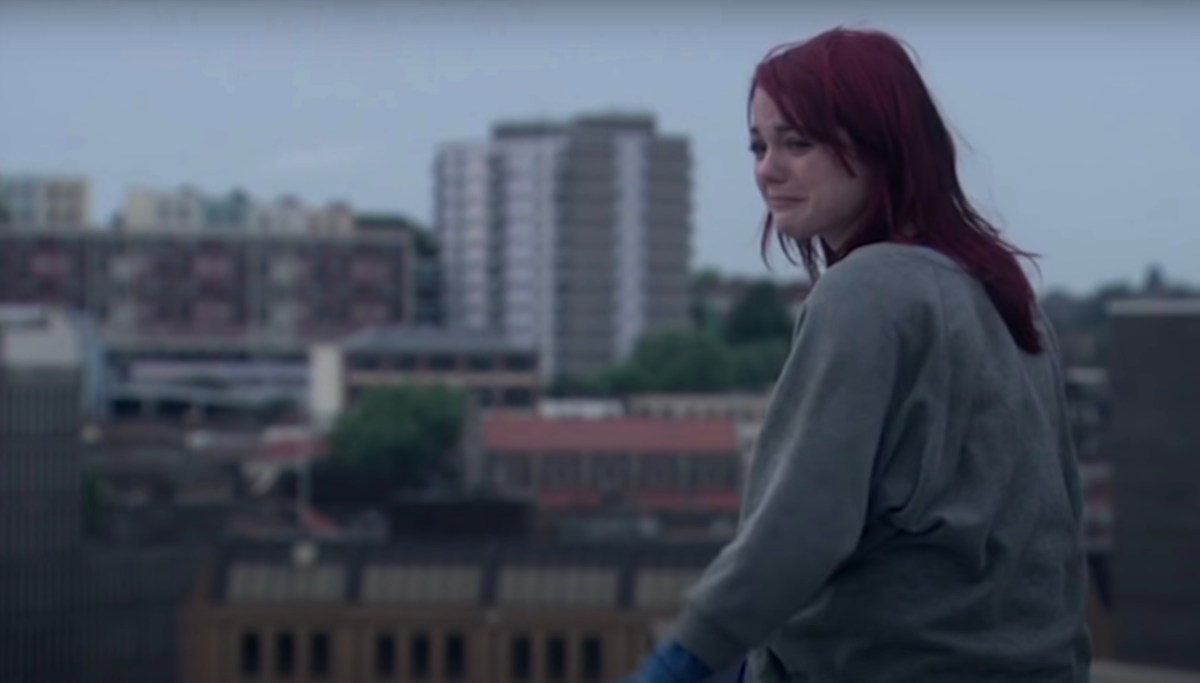 Time for the queer vertigo to really set in! If you would advise any couple to maybe not hang out in locations of inherent peril, it would be Naomi and Emily, whose fragile relationship would not survive falling off a stepping stool, never mind a concrete high-rise in Bristol.

This scene is a very bad time for everyone, Emily sat feet dangling over the edge while she essentially reads a graphic novel of Naomi cheating on her, while Naomi bawls behind her, probably wondering what sick bastard thought this up.

Some believers of the conspiracy theory that there was a follow-on called Skins: Fire may claim further bad times for Naomi on rooftops, but I couldn’t possibly comment. 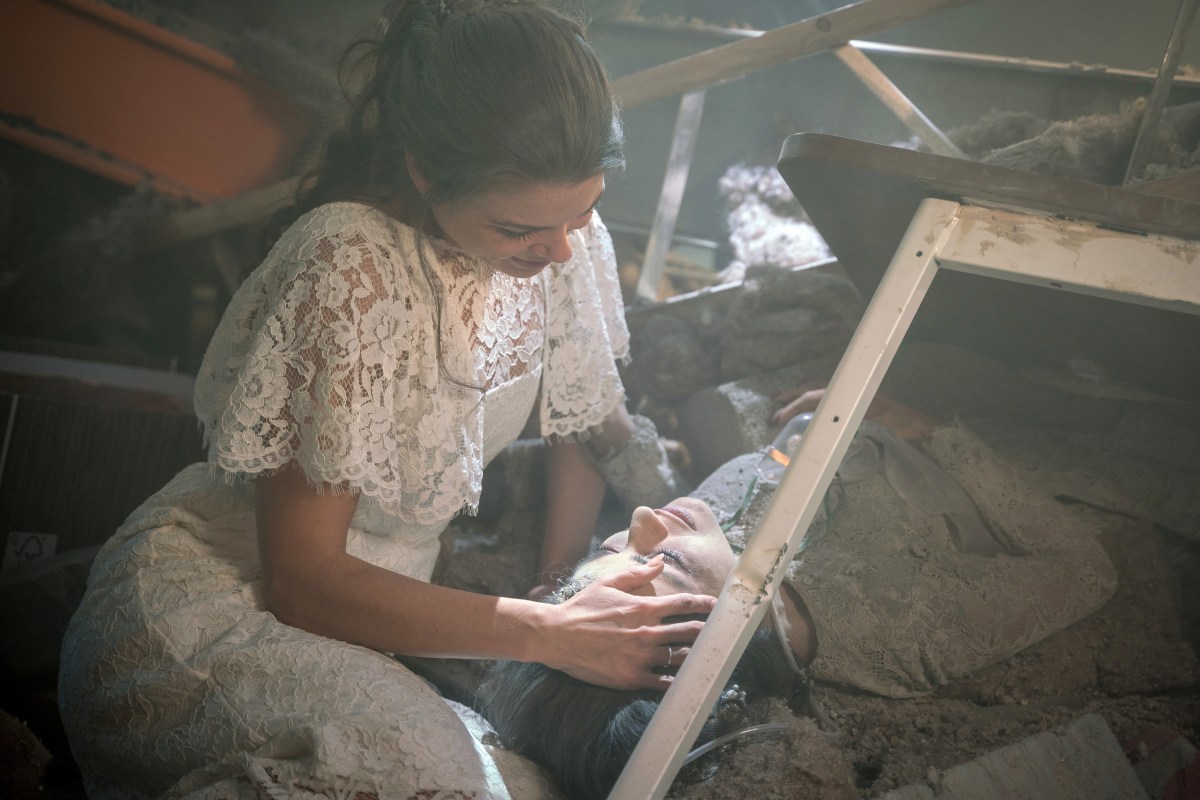 This is less a case of lesbian upon roof and more roof upon lesbian. Popping into Underworld to pick up the rings on her wedding day, Rana really should have known that a visit to Corrie’s blighted knicker factory carries a significant risk of death on any day of the year, so choosing to go on a day so overloaded with heteronormative importance was bound to end in disaster. When the factory’s roof collapsed on top of poor Rana, she managed to hold on just long enough to exchange vows with devastated co-bride Kate, showing that even though Corrie can’t manage to commit to happy endings for its lesbians, at least it commits to lesbian drama. 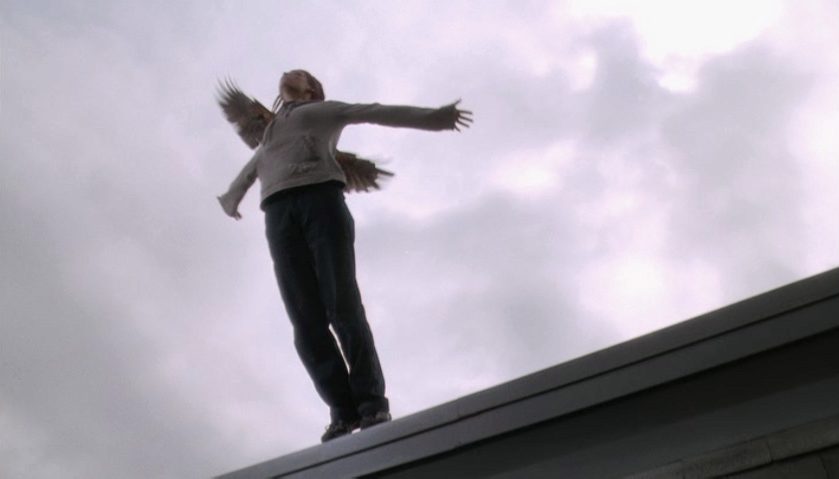 Regular readers of the site may remember Riese’s iconic list of dead TV lesbians. If you’ve long been outraged by the exclusion from this list of Paulie from Lost and Delirious for spurious classification reasons, now is the time to rejoice as we finally let her take centre stage, alongside her beloved falcon!

Heartbroken when her girlfriend abandons her for compulsory heterosexuality, Paulie’s decision to jump from the roof is probably not even the most dramatic or bizarre thing she does in this film (I think the duel wins, personally). Does Paulie really die, or does she transmogrify into a falcon? Is it even a falcon? (She only ever calls it a “raptor” which I for real thought was just a dinosaur until I looked it up.) Would this film have been vastly improved if she had nursed a dinosaur back to health instead, but then it viciously hunted down every single character? Those are personal questions that only you know the answer to in your heart of hearts.

In conclusion, I’m surprised there have been so many ups as well as downs along the queer parapets. On the whole, roofs seem significantly less deadly than cars, but slightly more likely to cause drama than outer space. Maybe it’s time we all get up there and find out!

Sally has written 51 articles for us.