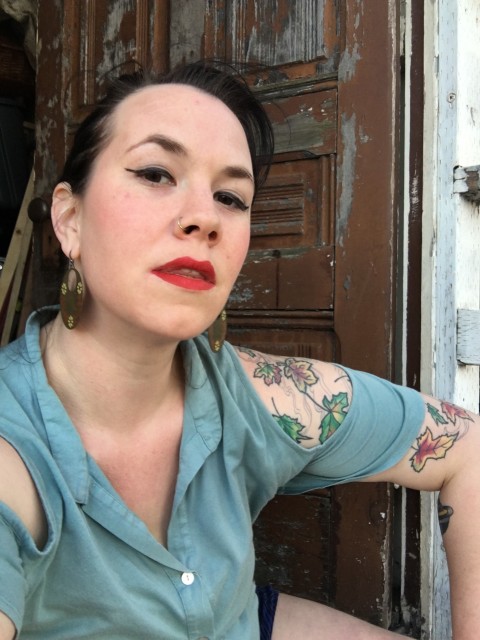 If you had to lose either your nose or your ears, which would you choose and why?

Assuming my hearing would remain intact, because hypothetical magic, I would lose my ears since I’m vain and I could hide my earlessness with my hair.

Fuck a Denver omelette, marry a bearskin rug, kill my ex. That was an easy one.

My pillow smells like my signature Ash scent: Kiehl’s Original Musk Spray, lavender and cigarettes. So, I smell like your grandma if she wore Kiehl’s.

How many times a day do you think about Corgis?

It would be easier to identify the amounts of time I’m not thinking about Corgis. Now that I have a nine-week-old Corgi puppy, I am pretty much worrying/thinking about her 24 hours a day. I take a break from corgi obsessing when I’m doing the sexual intercourse thing. I used to never think about Corgis during sex, because I am not a creep. But sometimes she cries when my partner and I are fucking, and then I can’t be present and I have to go check on her and we promised this Corgi wouldn’t affect our sex life and it mostly hasn’t, except for the first few days when she wasn’t sleeping through the night, and at least she’s not a real baby because we would never sleep OR fuck and oh my god I love her so much but she is so much work and I am so glad I will never have a real baby, even though they are very cute and my uterus is desperate for one, but my uterus does not control me. I’m sorry, what was the question?

What’s the worst nickname you’ve ever been given?

Freckle Tooth. I have a tooth condition that causes me to have almost no enamel on my teeth. When my adult teeth came in as a kid, they were yellow and covered in brown spots. Sexy, I know. My brothers called me Freckle Tooth and found it hilarious and it still stings when I think about it. I got made fun of by kids at school, too. At 19, I got veneers, so my teeth have been pretty for over a decade now. But to this day, whenever someone tells me I have nice teeth, my first instinct is that they’re making fun of me.

If you were a Teva sandal, which model would you be and why?

I would be a classic Birkenstock and you know that and you are taunting me by asking me such a ridiculous question.

What’s the most you’ve ever gotten from the tooth fairy?

I feel like I’ve revealed enough childhood tooth trauma for one interview.

Weirdest heckle you’ve ever gotten at a comedy show?

Last year an MRA dude interrupted my set to say “you already told that joke.” I have a logical, planned flow in my standup sets to get me from Joke A to Joke M, and I had definitely not repeated the joke.

Then he told me I wasn’t funny and that feminism was ruining America. Then another dude in the audience defended me by saying I was funny. Then the MRA dude told him, “You’re just saying that because you wanna fuck her.” Then I crushed that MRA dude by taunting him about feminism and queer ladies and the rest of the room laughed, because hecklers never win.

Hey heckler: I am smarter and funnier and quicker on my feet than you, bro. It still hurt my fragile gay feelings a little, mostly because I was excited to try out a new bit and instead this angry dude ate up the last five minutes of my set. TL;DR: Men are terrible.

Ash runs a fantastic comedy show in Oakland, CA called Manhaters. You can also find her online at ashfisherhaha.com, Instagram and Twitter. Ash’s Corgi puppy can very seriously be found on Instagram @corgi_vincent.