There comes a time in every dog-owner’s life when she’s one week away from a trip and has yet to secure a dog-sitter for the entirety of her journey, due to the cruel collapse of Plans A, B, C and D. (D was “take her with you to Portland,” rudely foiled by Delta’s $150-each-way pet companion fee, which is skyway robbery!)

This past Saturday night, I doubled-down on one particular element of Plan B: convincing Jen, Carol’s #1 fan in Los Angeles, to commit to watching Carol on Halloween. Jen will generally do anything to spend time with Carol, so you can imagine how impossible her schedule must be next week for her to turn down this opportunity. So the angle I took here, in hopes of overriding very practical concerns and logic, was to pitch Carol not as a dog in need of care, per se, but as a necessary Halloween accessory. I began throwing out Halloween costume ideas ranging from “Dog and dog-sitter” to “Lady and the Tramp,” each idea better than the last.

Then I thought, why share these ideas in such a limited forum on a day when we are short on content! Surely all of you could benefit from these costume ideas!

Top Ten Couples Costume Ideas For You and a Small Pet, for Example My Dog Carol

1. Koala and a Eucalyptus Tree 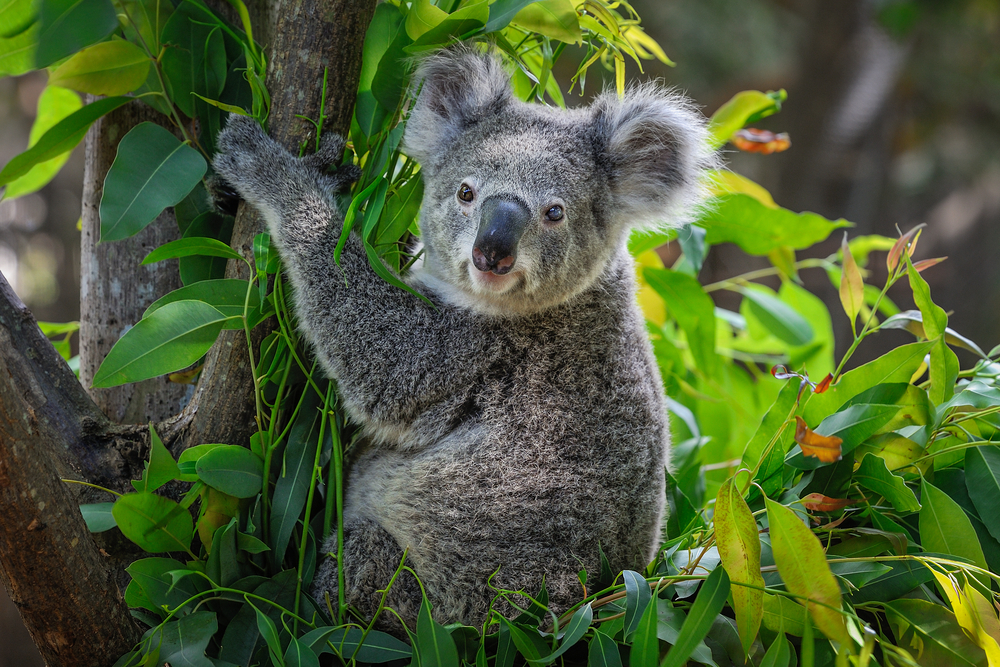 Sometimes when I pick up Carol, she holds onto me like she’s a Koala and I’m a tree. It’s really cute. Koalas are very “in” this year ’cause they’re from Australia, which is a country many Americans wish they lived in instead of this country.

Your costume: brown long sleeve t-shirt + bark drawn on the shirt with a sharpie + felt leaves glued on with gorilla glue
Your dog’s costume: koala costume 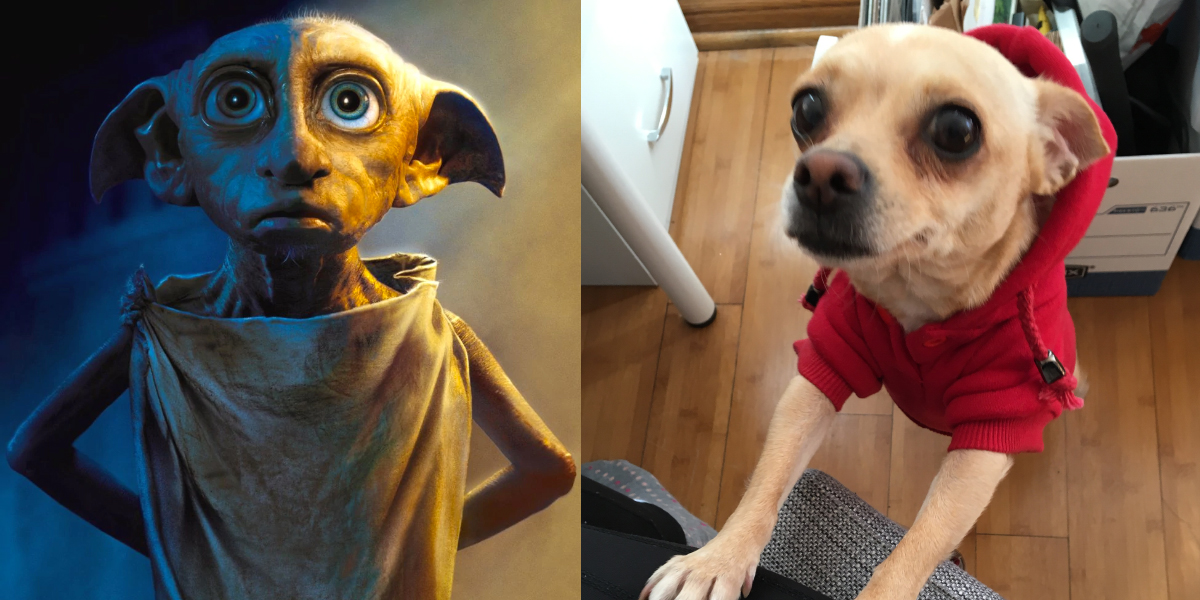 Chihuahuas and house elves have a lot in common, for example: ears like snack chips; intense, unbreakable and somewhat demented obsessions with their owners. Would Carol die for me? She would. But not if I died for her first!

3. Baker and a Blueberry Muffin

This wasn’t my idea specifically, but it’s a really good idea because it’s inspired by Jen’s favorite meme!

Your costume: chef’s hat + apron
Your dog’s costume: If it is a light-haired chihuahua, like Carol, it already looks like a blueberry muffin, so you’re good to go. If not then maybe get some Jiffy blueberry muffin mix, coat your dog in it, and then put your dog and the mix outside in the sun. Then the mix will bake around your dog, I think. 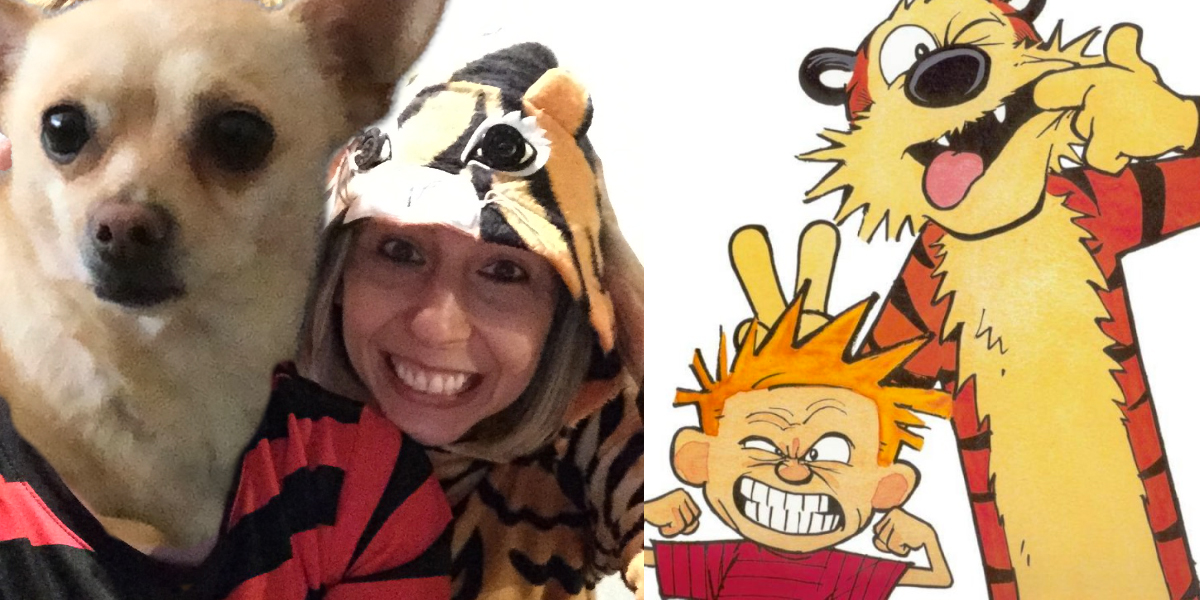 I’m fully cribbing this idea from many moons ago when I made a list of couples costume ideas for height-disparate couples, which I was, at the time, a part of. That year, me and my then-girlfriend were going to be Calvin and Hobbes. As you can see in the picture above, I have replaced my ex-girlfriend’s head with Carol’s head, which is a normal thing for somebody to do as part of their job. 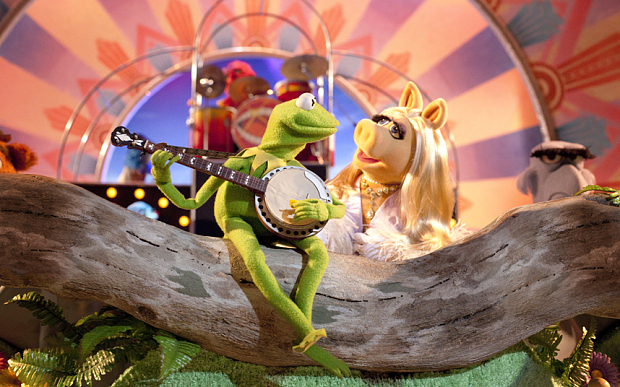 We all know that Kermit and Miss Piggy are the ultimate big femme / little butch power couple, and nothing’s cuter than a big femme carrying a little butch around in her arms. 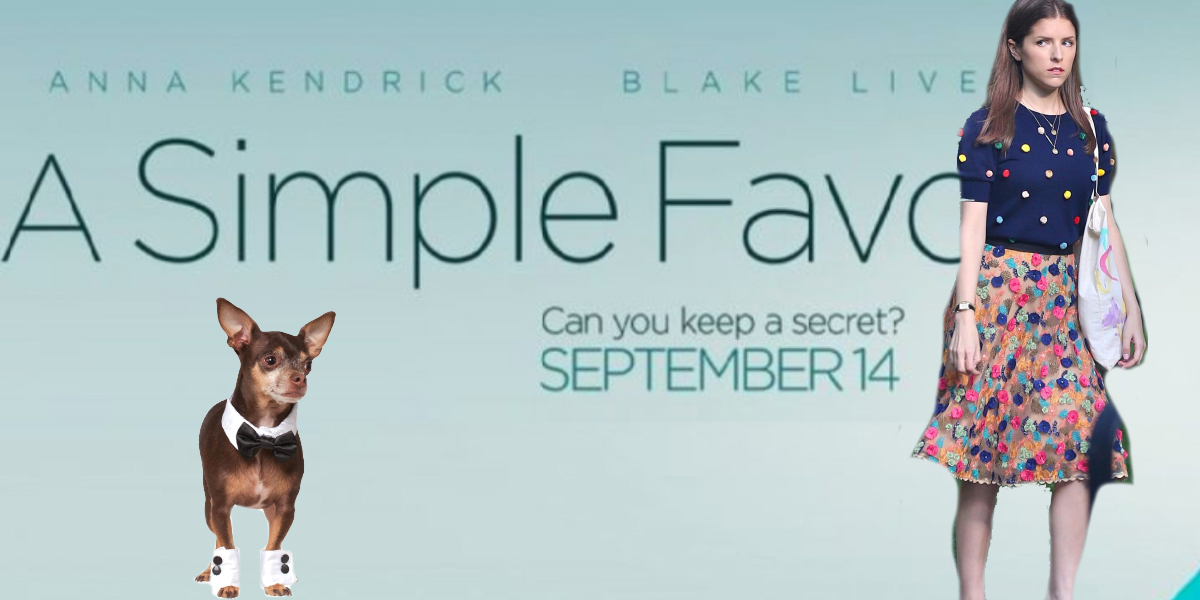 “A Simple Favor” is a divine cinematic experience I cannot recommend more highly! It’s a great date movie, but also a great movie to see alone, with friends, with a service animal or while eating a hot dog. Reasons this film are fantastic include but are not limited to “Blake Lively’s 17-piece suits.”

Your dog’s costume: bowtie & cuff set
Your costume: What you want is this Allice & Olivia sweater and this Bhanuni by Jyoti skirt but they are, unfortunately, out of stock. So instead you’re gonna get this sweater and put pom-poms on it and also this skirt, which is close enough.

7. Carol and the Monster Down The Street 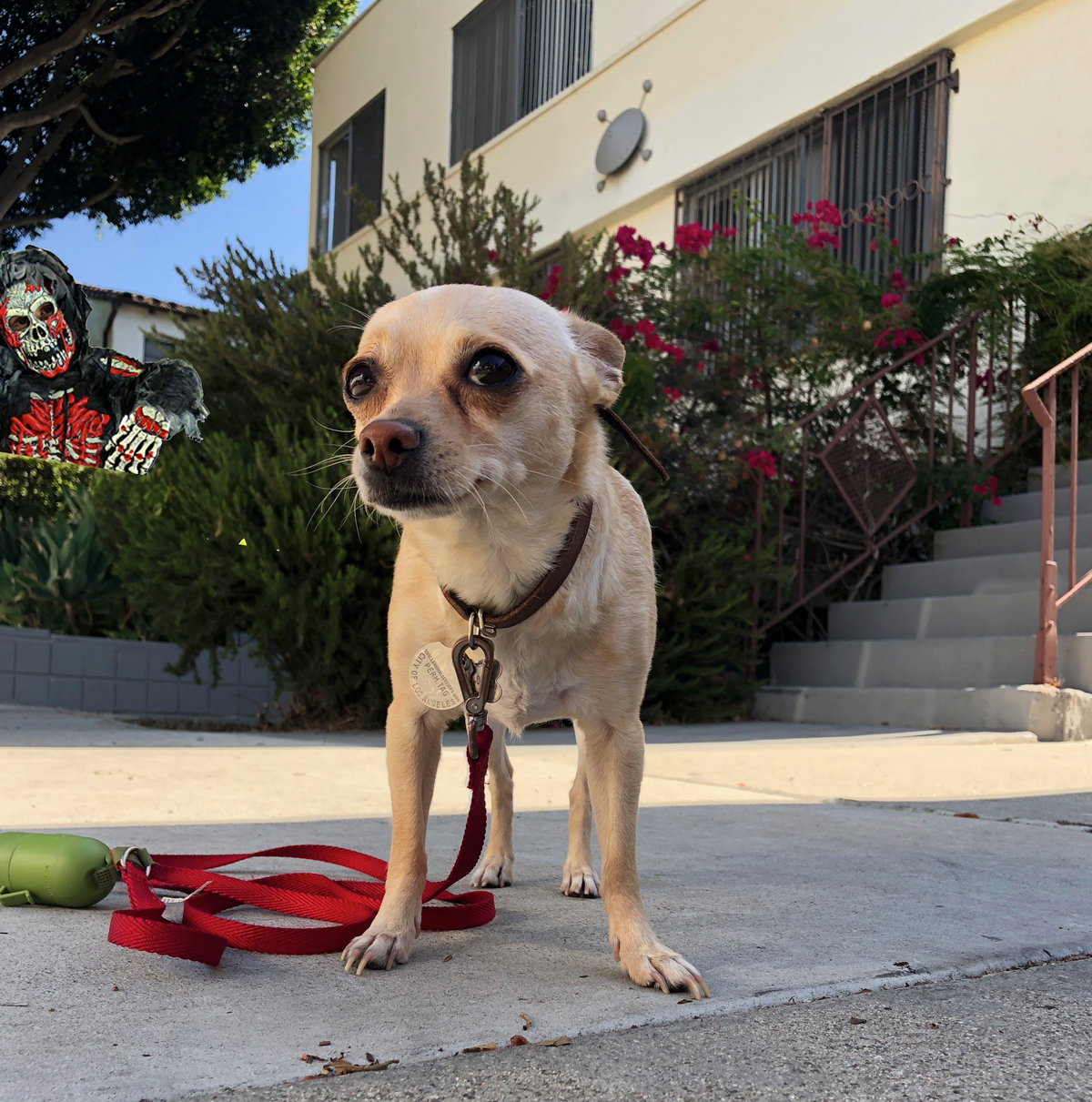 Many homes in Los Angeles are surrounded by enormously tall foliage fences, so that poor people can’t see in and get jealous. So I can’t say for sure what danger lurks beyond the giant bush surrounding the house at the end of my block — I’m pretty sure it’s a German Shepard, but the way Carol behaves, physically and verbally, every time we pass that house while the [mysterious thing] is in the yard, suggests that it is not merely another dog but something much worse. For example: a killer zombie, a Velociraptor from Jurassic Park, Chuck Grassley, the ex-girlfriend I’m the most annoyed with right now, Ezra Fitz and/or the loch ness monster. 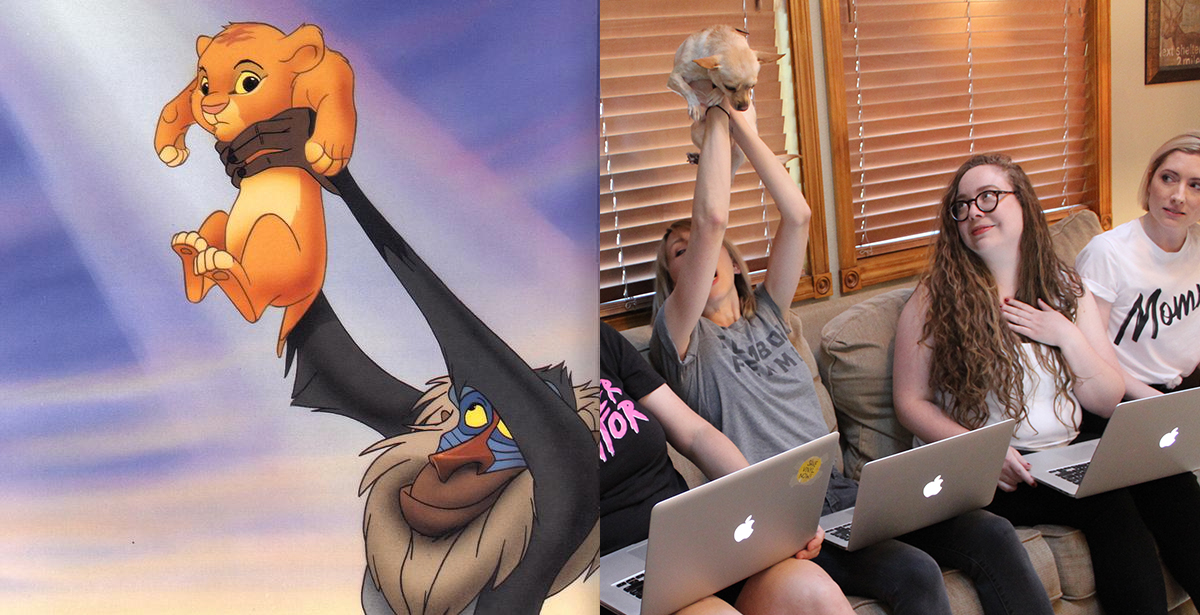 I am demonstrating Carol’s relaxed attitude about blinking, stepping into the sun

Carol’s been practicing for this her whole life, ’cause I love playing The Lion King song and then lifting Carol to the sky while saying things like, “look how high up you are!!!” She stays totally chill the whole time. 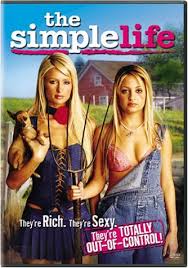 “But I already have a human being I’d like to do a couples costume with,” you might be thinking to yourself about the idea of doing a couples costume with a dog. Really, if this is your situation, the only thing you can do about it is to dress up like Paris Hilton and Nicole Richie from The Simple Life, a classic reality television program that nobody cares about anymore besides me and Kayla. The dog in this scenario, Tinkerbell, is an icon, and I think about her every day. 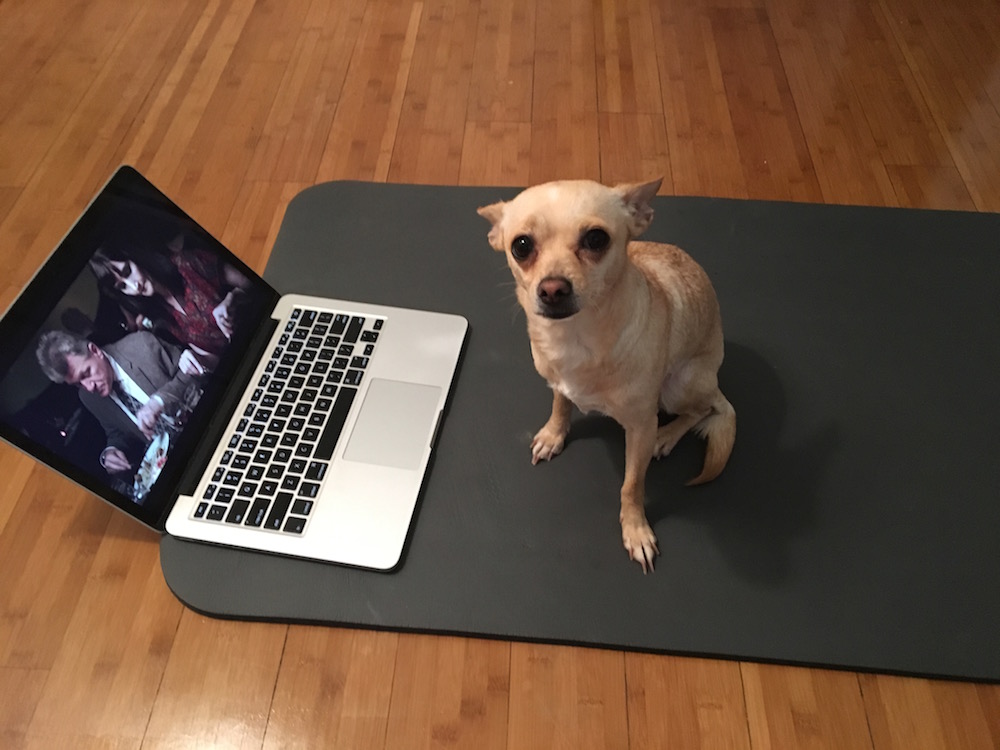 Carol on my yoga mat, expressing her love of yoga

Your costume: Yoga pants + yoga shirt
Dog costume: Basically you just need your dog to face downwards. You can encourage your dog to look down by playing that song from Les Miserables or by tying a piece of fish to your shoe.

What’s your favorite human/dog duo costume? Do you have any pictures of your cute dog in a costume? Feel free to share!