I remember how excited I was when I first learned about Columbus. The kid version of that story had everything — high-seas swashbuckling adventures! a guy who outsmarts royalty! adorable ship names! — and my fondness for it was only matched by my crushing disappointment when, years later, I read Lies My Teacher Told Me and realized that my lionizing instincts were largely misplaced. Luckily, as I got older and learned how to supplement my education on my own, I realized that there were plenty of other explorers with equally exciting lives, who were much less bloodthirsty than all the dudes we had to learn about. Some of them – gasp! – weren’t even dudes at all. So in that spirit, I present you Ten Amazing Explorers Who Are Female, And Also Not Columbus, so you can spend this holiday in better company than its namesake. 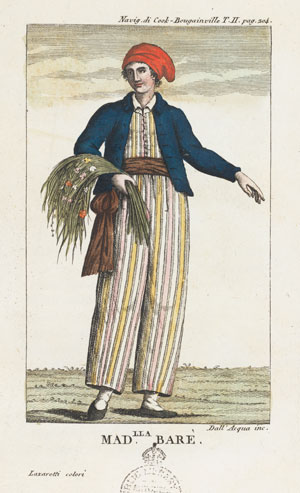 Jeanne Baret was born the daughter of French serfs in 1740. By the time she was 35, she had become the first woman to circumnavigate the globe, as a member of the famed Louis Antoine de Bougainville expedition. This would be remarkable enough on its own; it’s even cooler because at the time, women weren’t allowed on French naval ships. In order to gain passage, Jeanne had to literally pass, so she became Jean, assistant to Philibert de Commerson, the expedition’s botanist and Jeanne’s long-time lover. “Jean’s” physical strength, adventurous spirit, and botanical knowledge, along with Commerson’s complicity and some chest bandages, kept her from being discovered until the ship got to Tahiti, and by the time they docked in Mauritius, she had been completely around the world. By this point, besides making history, she’d aided in the discovery and collection of dozens of plants, including the enormous pink-flowered bougainvillea vine, which she and Commerson named after their ship’s commander. Commerson tried to name a whole plant genus after Baret, but he got beaten to the punch, and it wasn’t until earlier this year that anyone tried again. For more on Baret, check out this Robert Krulwich article that Laura teampicked, and for an extensive treatment, try Glynis Ridley’s The Discovery of Jeanne Baret. 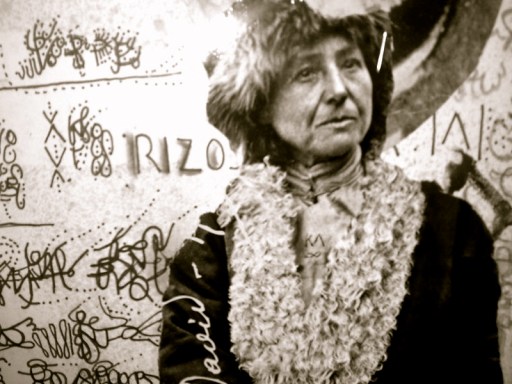 Alexandra David-Neel started running away from her home in France in 1870, at the age of two. First she only got as far as the street outside before her parents recaptured her, but over the years she began ranging further and further afield, making it to England, Switzerland, and Spain on her own before she turned eighteen. A self-described “diminutive eaglet obsessed with flying through the air,” any time not spent physically traveling she devoted to studying. She’s most famous for disguising herself as a beggar and sneaking into Tibet in 1924, when foreigners were strictly forbidden, in order to pursue her interest in Eastern philosophy. Over the course of her travels, she also worked as an opera singer, became a thirtieth degree Freemason, published anarchist and feminist treatises, lived in a cave for two years while learning spirituality from a man notorious for commanding demons, hung out with the Dalai Lama twice, and wrote dozens of travel books that became required reading for the entire Beat generation. Oh, and she lived to be 100. My whole “backpack through Europe someday” ambition suddenly seems kind of puny. 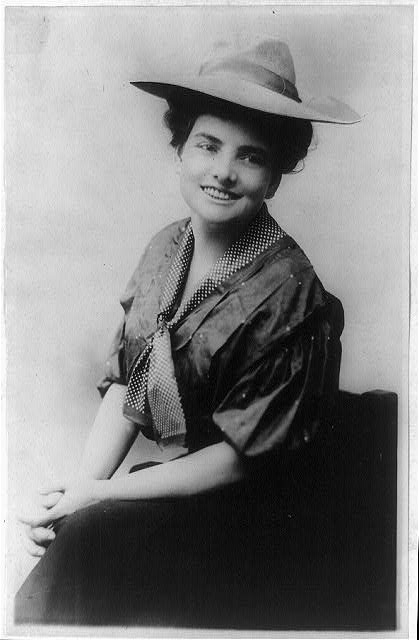 Harriet Chalmers Adams, widely regarded as her time’s foremost female explorer, never went to school – she just read a lot, and had a burning need to see things for herself. This led her to ride horseback over the routes of Columbus and the other Spanish conquistadors, write extensively for the National Geographic society, found and preside over her own Society of Women Geographers, and serve as a World War I correspondent for Harper’s in 1916 (she was the only woman allowed in the trenches). Over her 50-year career, she left footsteps over some hundred thousand miles of the world, and was only given pause by confusion over why other women didn’t follow her:

“I’ve wondered why men have so absolutely monopolized the field of exploration. Why did women never go to the Arctic, try for one pole or the other, or invade Africa, Thibet, or unknown wildernesses? I’ve never found my sex a hinderment; never faced a difficulty which a woman, as well as a man, could not surmount; never felt a fear of danger; never lacked courage to protect myself. I’ve been in tight places and have seen harrowing things.”

It’s lucky for us that none of that stopped her – nearly a century later, her articles and photographs remain gripping and educational. 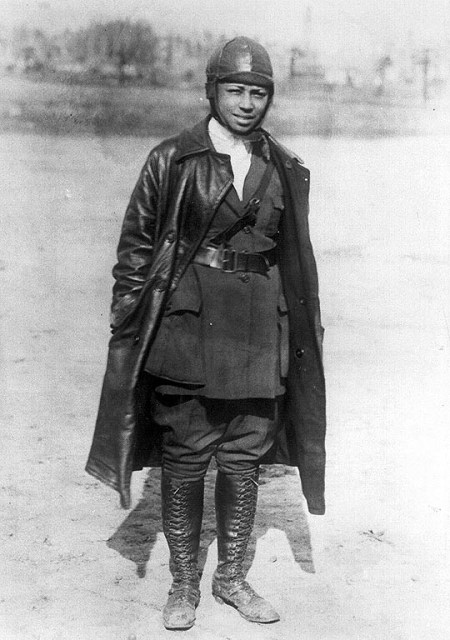 via concreteloop by michael ochs

Bessie Coleman, born in Texas in 1892 to impoverished sharecroppers, would not let anything keep her down – not poverty, not widespread double-bladed discrimination, and definitely not gravity. After catching the aviation bug from the World War I pilots that frequented the barbershop where she worked (and, like many great women, spurred on further by her brother’s insistence that she couldn’t do it), she decided to become an aviator. She was turned away from every American flight school she approached because she was a black woman, so she took night classes in French, got sponsorships from the Binga Bank and the Chicago Defender, and moved to Paris, where she became the first African-American female pilot in history, and the first African-American of either gender to earn an international pilot’s license. After another stint in France to learn stunts, Coleman returned to the United States, where she gained renown and respect through her barnstorming airshows (which she made sure were desegregated, despite the policies of the time). Although her dream of establishing a school for black aviators was cut short by her death (in 1926, in a flying accident), her work and legacy made room for many others, including the Tuskegee Airmen and Willa Brown. 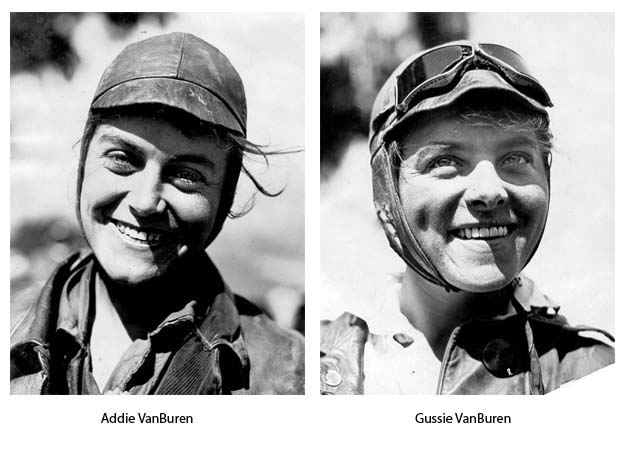 In 1916, Gussie and Addie, were tired of hanging around New York City and being twentysomething society girls. They were also tired of being told that women couldn’t vote, wear pants, or serve in the armed forces. So, in order to prove that women had the necessary grit to be wartime dispatch riders (and therefore also deserved suffrage in the country they were helping to protect), they roared out of Brooklyn on twin Indian Power-Plus motorcycles and traveled across the country to Los Angeles. Their journey took them two months and 5,500 miles, and made them the first women to ever cross the country by solo motorbike. Along the way, they battled dangerous roads, disparaging media reports, cross-dressing laws, and dwindling water supplies, and rounded things out by being the first people to take any vehicle up Pike’s Peak. Although the military still rejected Addie’s dispatch rider application, both sisters put their helmets back on and continued to break barriers, Addie through her work in education and Gussie as a member of Amelia Earhart’s 99s Organization of Women Pilots. 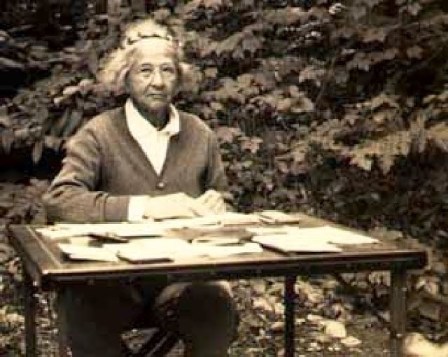 Unlike many of these travel-happy whippersnappers, Ynes Mexia got into the explorer game late. After a brief career as a social worker, Mexia found herself stuck on a ranch in Mexico in an unhappy marriage to a man who was bankrupting the poultry business she had started, so she divorced him and went to San Francisco. Swept up in the budding environmental movement there, she joined the Sierra Club and enrolled in botany classes at UC Berkeley in 1921, at the age of 51. Only four years later she had begun accompanying professors and curators on collecting trips around the world, and soon she was organizing her own expeditions, traveling alone to Mexico, Alaska, South America and sending specimens back to UC Berkeley and the United States Department of Agriculture. Over the course of her thirteen-year career, she collected 145,000 plant specimens, more than any other female botanist.  Five hundred of these turned out to be new species, which just goes to show that it’s never too late to start trying to get on this list. 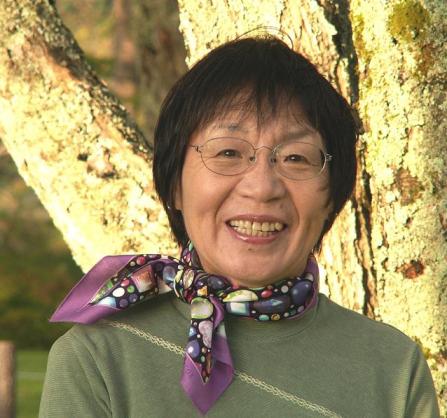 Junko Tabei climbed her first mountain in fourth grade and was captivated by how different things look as you move up. Despite belonging to a society that expected her to follow a set path – i.e. not mountaineering– Tabei blazed her own. When she couldn’t find climbing groups for women, she joined ones for men; when she had learned what she could in that environment, and scaled all the major peaks in Japan, she founded the Women’s Mountaineering Club (slogan: “Let’s go on an overseas expedition by ourselves”). As the group leader, she overcame everything from funding shortages to culturally ingrained communication issues to avalanches, and in 1975 became the first woman to summit Everest. Since then, she’s become the first woman to complete the Seven Summits (the highest mountain on each continent) and she’s working on climbing the highest mountain in each country. She currently lives a low-profile, high-altitude life, campaigning for sustainable mountaineering and trying to climb the highest peak in every country. 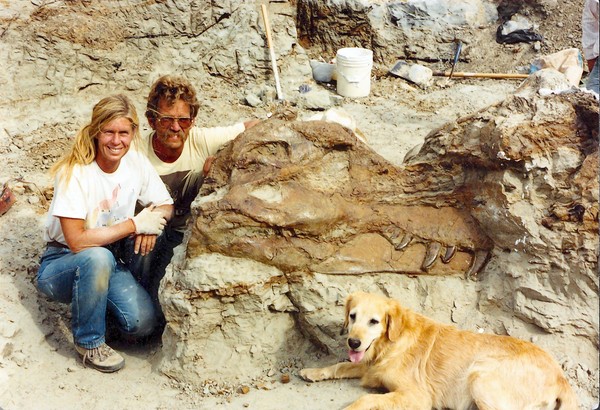 Sue Hendrickson is best known for discovering the world’s most complete T. Rex skeleton, which lives in the Field Museum and bears her name. But she was an explorer long before that, dropping out of high school at age 17 and going to work as a professional diver, collecting tropical fish to sell to pet stores in Florida. From there she got into salvage diving, retrieving materials from capsized cargo freighters and exploring shipwrecks in the Dominican Republic. That led her up to the Dominican mountains, where she discovered half of the world’s total collection of perfectly amber-preserved 23-million year old butterflies. She found Dino-Sue in 1990, in South Dakota. She credits her skill at finding things to a combination of intuition and a willingness to pay attention, two important traits of adventurers that are, in my opinon, too often overlooked. 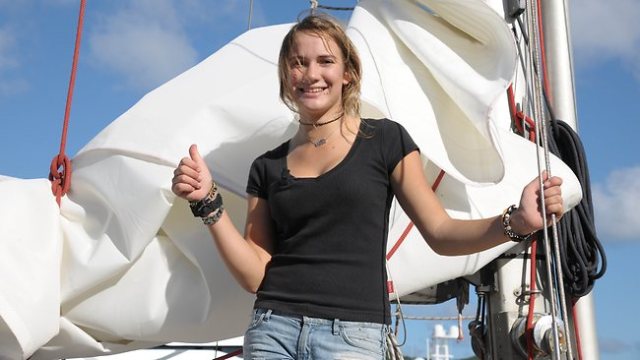 Fittingly, we come full circle with our last pick. Jeanne Baret had to dress like a man to sail around the world; Laura Dekker could wear whatever she wanted but had to fight the Dutch courts, who weren’t sure they wanted one of their citizens sailing solo around the world before she could legally drive. After a prolonged court battle, during which she was taken into custody by child services, Dekker, who had been embarking on solo journeys since she was six, set out from Portugal in a boat named Guppy. During a year and five months of 18-foot waves, cockroach stowaways, looming cargo ships, and kamikaze flying fish, she somehow found time to keep a blog and do her homework. When she pulled into port in Sint Marten on January 21st, 2012, at 16 years and 123 days old, she became the youngest person to ever circumnavigate the globe by herself, and one of the latest in a long and proud tradition of ladies who aren’t afraid to go anywhere or do anything, any day of the year.