It’s Pride month, and here in NYC that means there are suddenly more things to do than anyone can actually keep track of. This self-identified homebody in particular feels very overwhelmed by everything happening — in a good way! But still. It’s a lot. So, I went ahead and combed through the parties and the fundraisers happening around town this June and lined up the things I am most excited about for your viewing pleasure. My one wish is for everyone to find the party most relevant to their individual fun-time style, so please share what you’re doing this month so that no one has to miss out on anything. Hope to see you around! 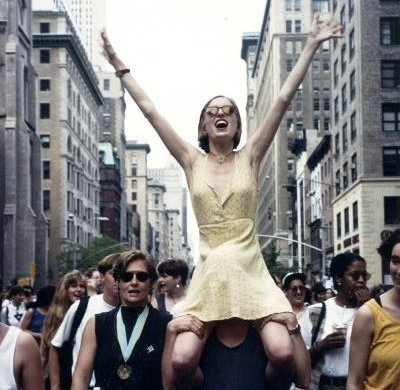 via the nyc dyke march

Tuesday, June 11, 6pm, 21+
Annual Stonewall Raffle For The NYC Dyke March, at the Stonewall Inn
If you’ve never been to this yearly event, you need to go. It’s always packed, and the raffle prizes are traditionally amazing. One year I won original art by Alison Bechdel, just saying. There are also drink specials, and since it’s the first Dyke March event of the season, it’s pretty exciting. You could win an Autostraddle gift bag!

Tuesday, June 18, 7:30pm, 21+
The Dyke March Cocktail Party, at The Dalloway
The fanciest party ever sponsored by the Dyke March. Put on your Tuesday finest and sip cocktails while learning what the Dyke March committee is up to this year.

Thursday, June 20, 7pm, 18+
Queer Pride Cocktail Party with Babeland + Autostraddle, at Babeland Soho
You have to come to this because you love Autostraddle and maybe also sex. The workshop will be about kinky tips and the first 15 guests get free gift bags. More info will be on this website soon since it’s our party.

Saturday, June 15, 8pm
Party With Pride For The Astrea Foundation, at the Gowanus Loft
Or, instead of going to a massive mermaid dance party, you could go to this party, which is in support of fierce queer activists around the world. It’s $50 before 9:30pm, but after that it’s $25! Also though, no one will be turned away for lack of funds, so actually this is however much you want it to be. There’ll be performances, dancing, food, drinks, etc. Sounds great.

Saturday, June 23, 9pm, 21+
SIREN, NYC’s Official Saturday Night Pride Beach Party, at Beekman Beer Garden Beach Club (South St. Seaport)
There are mermaids on the flier for this. Also, relevantly, it’s a dance party on the beach with like, 2500 lesbos, or so the invite says. It’s $25, but they’re donating some of the money to the Ali Forney Center, and honestly think about how quickly you’d spend that same amount of money at some boring bar not dancing with thousands of queer grrls and bois.

Thursday, June 27, 8pm
EVERYBOOTY Curated by Spankzine Buddy, HEY QUEEN! and Earl Dax, at BAM/Brooklyn Academy of Music
A radical night of multi-arts mayhem to ring in Pride weekend. Why the eff wouldn’t you go to this? It will literally have all the things a party could have. Plus it’s at BAM which is cool.

Friday, June 28, 10pm
Hot Rabbit Pride, at The Monster
Do you like hot sweaty dance parties? DJs, cheap drinks, cuties; this party was named one of the best Gay Nightlife Events by Time Out NYC for a reason. It’s $5 cover if you have the password, which is on the Facebook invite.

Saturday, June 29, 8pm, 21+
The Official Dyke March After Party, at Ginger’s
Join in the time honored tradition of getting totally wasted after the Dyke March at your favorite neighborhood lesbian bar, Ginger’s. This is a great thing to do even if you have plans to go to some hip dance party afterwards, because who doesn’t like Ginger’s and also you can get swag from this year’s march. Also, this is the Dyke March’s biggest fundraiser, so it’s important.

Sunday, June 30, 21+, 5pm
NYC PRIDE 2013 Whitney Day Events & Hot Rabbit Present: Wild Thang, at the Marquee Nightclub
So let’s say you’re not too hung over from the Dyke March After Party and even have motivation to do something during/after the Manhattan Pride parade situation. This looks like a good option if you like to dance a lot and have hot sweaty photos taken of you.

Okay, what will you all be doing this month?