Yo, LA Straddlers, what are you up to tomorrow night? Oh, you don’t have plans yet? Cool, let me help change that.

Tomorrow (Tuesday!) night, Autostraddle’s favorite risen star Haviland Stillwell will be performing Rockwell: Table & Stage with Amir Levi (of Unicorn Plan-It hilarity and fame) and a bevy of talented musicians, including Autostraddle’s own Alex Vega. Did you just get so excited? Duh, of course you did. Allow me to raise your excitement level even more with this flyer. Try not to faint from the pure hotness that exists in this image. 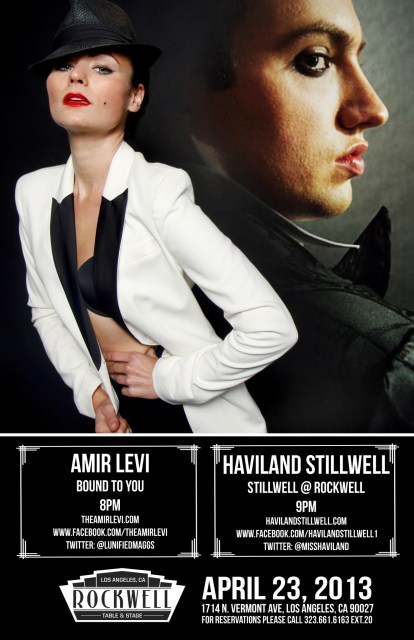 did you pass out?

This performance is particularly exciting because Haviland has recently released two brand new singles, “MKE” and “Infinity,” and will be performing both of her new hits along with a third single that has yet to be released (and of course many old songs and covers, too!). She has big plans to release a full-length dance pop album in the near(ish) future, but for now you’ll just have to be satisfied with these singles — trust me, they do not disappoint. “MKE” invokes Haviland’s alter ego, MKE, in a fun track that is absolutely impossible not to dance through, and “Infinity” touches on some super gay themes and will have you swooning over the sound of Haviland’s sweet vocals. Did I mention that I really like these songs? And that I’m pretty jealous that all LA humans can go see them performed live? Yeah.

If you’re like me and can’t attend this show, you can still rock out to Haviland’s new singles. Both songs are written by Haviland Stillwell and produced by Mike Schlosser, with cover design by Heather J. Weiss and photos by Sabrina Bringuier. Buy them on iTunes (“MKE“; “Infinity“) or stream them on Spotify (“MKE“; “Infinity“) and host your very own dance party right here, right now. Get into it!

Vanessa has written 393 articles for us.