Photos courtesy of Lynn Ballen/Lesbians to Watch Out For

Picture it, dear reader: you’re on Jeopardy!, ready to conquer your opening round, staring down those blank blue screens with fire in your eyes. And then bam, there it is, first category on the board:

How would you fare? If you’re like me and a) the answer is “not well enough” and b) you live in the LA area, I have great news: the new history and art exhibit Lesbians to Watch Out For: ’90s Queer LA Activism has you covered. It’s what you wish you’d learned in school, but were too afraid (or young, or closeted) to ask. 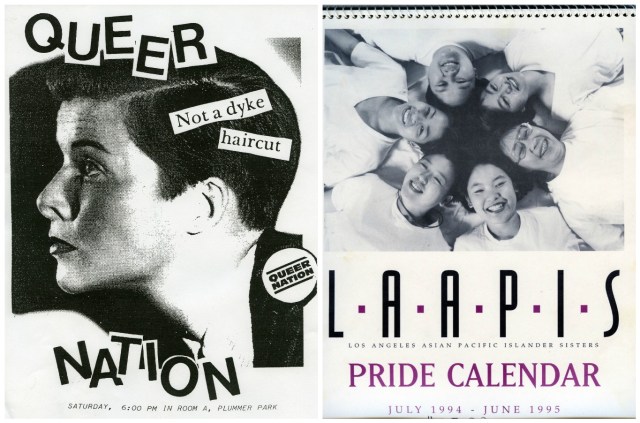 Judy Sisneros, another lead organizer, notes that “from the AB101 protests to Hollywood Homophobia actions to organizing for the ’93 LGBT March on Washington, ’90s lesbian and queer women’s activism in LA reflected the energy of the decade: dyke visibility marches, public kiss-ins and declarations of ‘we recruit!'” That’s the kind of cultural history you’ll revisit (or see for the first time) at Lesbians to Watch Out For. I don’t know about you, but I’ll take all the queer resistance inspiration I can get right now, thanks.

The exhibit opens TONIGHT (Friday, June 2) at 7:00 pm at Long Hall in West Hollywood’s Plummer Park, with music, protest sign and button making, vintage stickers and zines, video, and the documentary Lesbian Avengers Eat Fire Too (more info at the opening night Facebook event). It will be open on weekends through June 30 (Fridays 6:00-9:30 pm, Saturdays and Sundays 1:00-6:00 pm), with the exception of June 9-11 because of Pride logistics.

On board yet? Cool, me too, see you there!