Hello it’s time for us to help some people live happier and more fulfilled lives! Throughout this post you’ll see some updates from past needers of help! I LOVE UPDATES. 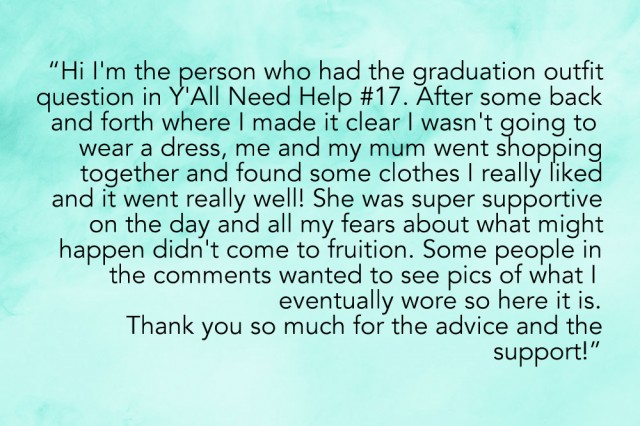 You looked so great!!! Congratulations on graduating! // YNH #17

Hello; I am 32 years old and about a year ago, I partially came out as a lesbian (out to friends, not to family).
I want to embrace my identity and my sexuality as I have been hiding for a very long time. (I have been with women before but not for a long time as I was stuck in an abusive marriage which resulted in him going to jail, yay!) And me being a single, solo mom.

I entered into that relationship at 18, trying to turn myself straight bc I was too scared to tell anyone what I was going through and it truly was the worst mistake of my life. I’ve been in therapy for years now and am dealing with the trauma, my sexuality, all of it, but I still can’t bring myself to talk to my parents about it.

I wonder if it’s too late for me. If I’m too old, and if having a child will mean other lesbians won’t believe me or want to date me anyway.

Please help me. I really don’t know what to do to move forward.

Buddy, have I got some EXCELLENT news for YOU. You’re definitely not too old, it’s not too late, and other lesbians will be super chill and possibly even excited that you have a kid. I’ve written a lot about this! In fact, I think it’s the thing I’ve written the most about! Take a look at Q18 in Y’All Need Help #24 —

Here’s my story, here’s Katrina’s story, here’s Jeanna’s story, and there are books like Dear John, I Love Jane, and are you familiar with Glennon Doyle Melton? Even if you don’t see yourself in any of these accounts, it’s important that you do see yourself somewhere, so please keep looking. You can live through this because other people have! You can make hard decisions that make you feel like Wile E. Coyote pressing an enormous detonator. You can you can you can!

I used to think that no one my age (25 at the time) would want anything to do with a newly out lesbian who had two kids and an ex-husband, so I kept them all a secret for months, years.

Coming out is hard. Divorcing your children’s parent is hard. Potentially disappointing your mother is hard. But being silent and miserable is harder. Being scared and fake is harder. Being anyone other than who you are or who you want to be, is shit. Your kids need to see hope and honesty in action, even when it’s hard, especially when it’s hard. Your kids deserve the entirety of you. You deserve the entirety of you.

And these are just the first three that came to mind! I keep including questions like yours in these advice posts because people keep needing the reassurance and I LOVE TO REASSURE. I LIVE FOR IT. Now you can search our archives for dating and coming out advice! Get a babysitter and get out there! 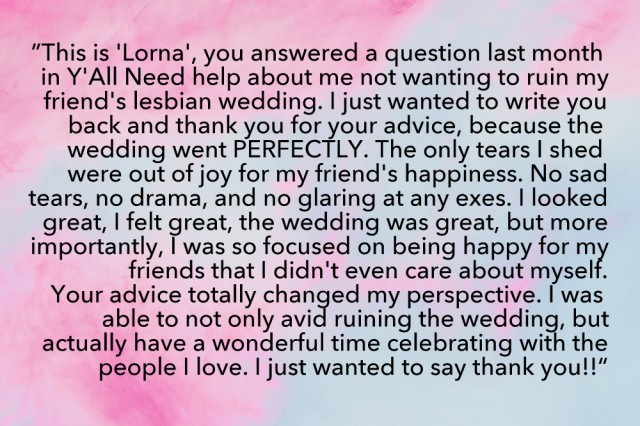 I was dumped by my girlfriend 6 months ago, for a few reasons. Suffice to say, we were doomed from the start since we were in very different phases of life. Before we dated and during our relationship, I was very into gay culture and full of pride and happiness about queerness. She was pretty closeted and conflicted about her sexuality when we were together, so I made a pretty active effort to get her to feel the excitement about being in a new world. But since our breakup, the tables have turned and now all gay things make me sad- even Autostraddle pieces just bum me out. I’ve tried reintegrating with the community by going to queer events, but it just makes me feel lonely. How can I get out of this funk and be myself again?

Oh yes yes yes, I am familiar with this. On the bright side, this Autostraddle piece can’t bum you out because it has YOU in it! I think full immersion is probably the quickest way to get out of this funk, or you could try ‘more time’ which isn’t quick at all, but will still work. Have you asked some friends to go with you to the queer events? Who did you go with before you met her?

It could also be that you’re actually just missing the feeling of introducing someone else to the queer things you love. Are there other people in your life who could use an introduction to the big queer world? Or maybe a better approach would be to find new aspects of queer culture that you haven’t fully explored yet. There’s so much to learn and try! I feel like a children’s television show but it’s true! 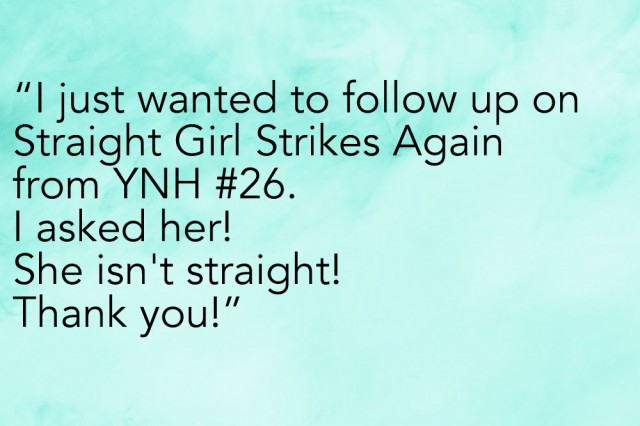 Hello. I have a question about an ongoing issue in my life that is directly related to being gay, and I’m hoping you can shed some light on it: I’m constantly worried that being “too friendly” with platonic female friends and acquaintances will be perceived as flirtatious. As a result, I often feel awkward around women, like I’m constantly editing myself. For example, I’m not sure how to buy someone a coffee, or ask them to join me at a concert, without a ton of anxiety about how those actions could be misinterpreted. So, I avoid those types of gestures, even though I know they’re part of normal friendships. I come across as emotionally distant and “cold”, which is ironic because the whole thing is…a cover for my fear that it might appear as though I care about a friend “too much”.

Am I the only one with this anxiety? How can I reframe my thoughts to get over this so I can just be myself and be kind to people?

You sure as heck are NOT the only one!! This has plagued our people since the dawn of time. I think, especially when you’re thinking about straight women (or even “straight” women, ok), one of the markers of being hit on is when someone tries to pay for things — drinks, coffee, tickets to a concert, dinner, etc. Try not paying for anything. Invite them to do things with you! Just don’t pay! Then, later on when you’re quite good friends and everything is chill and nice, you can be like “hey I got this” and instead of looking flirty, it’ll look like a nice chill gesture from a quite good friend.

Oh and be careful with your eyes. Some people have extremely sexish sex eyes by nature, and it can seem like they’re flirting when they’re not, they just have sexish eyes. Don’t lean in, don’t touch them unnecessarily, let them get the door, don’t pay, and keep your eyes decidedly unsexy.

sign up for our newsletter
Related:coming out a little laterY'All Need Helpyou need help