:kicks down the door with a flourish: WE’RE BACK, BAYBEEEEEE!!!!

Hello! Hi! Hey there! And welcome back to Wynonna Earp recaps! It has been a MINUTE. And what better time for this chaos crew to return to us than in the middle of…well, 2020. The first half of this year has been an eternal night and Wynonna Earp just rode into town with a truckload of sun lamps to help us make it through the back half. I don’t even know if I remember how to write a Wynonna Earp recap, as evidenced by that ridiculous metaphor I just made, but I’m so excited to try.

Hopefully you spent the extra-long hiatus doing a full rewatch but in case you didn’t, here are some important things to remember that happened at the end of Season Three: Waverly kind of proposed to Nicole, Wynonna drugged Jeremy, Robin, and Nicole to keep them away from the Bulshar fight, Wynonna killed Bulshar, the door at the top of the sometimes invisible stairs opened up and vines stole Waverly, and Doc went in after her. When Wynonna got back to the homestead, her friends were gone and VALDEZ was scratched into the wall. All she had left was Randy Nedley.

The first shot of Season Four is of a barren snowy expanse with just a few stone structures looming. Surely that’s fine.

We quickly pivot to Wynonna in Shorty’s, going through some makeshift weapons and arming up. When she’s done, she flips her hair; Wynonna Earp is BACK. 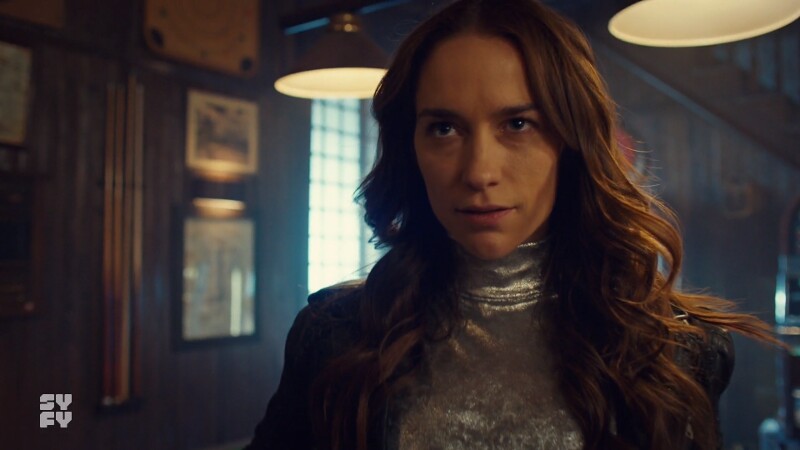 I guess the only turtleneck she had to cover up the Bulshar/Doc bites was from…a Barbarella cosplay? So shiny.

And then Nedley speaks for all of us when he says, “I feel like I’ve been standing here for two years.” And that’s just the first of many, many winks at the audience in this episode, which is basically just a 42 minute love letter to the Earpers who fought and campaigned and wrote and begged and FOUGHT for this show’s renewal.

Wynonna and Nedley head to the woods to find the stairs and are delighted to actually find them. Nedley gives her some words of encouragement and Wynonna climbs them and takes a leap for her baby girl…but lands on her back. She lets out a weak cry for her sister, which is echoed by a much louder scream from Waverly. 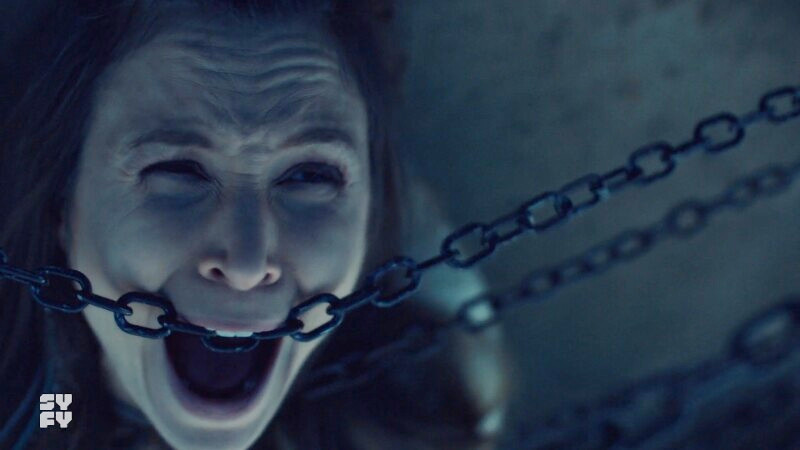 When Wynonna gets up, she realizes the stairs have disappeared and is furious. (Funniest line read of the word “architecture” for 800, Alex.) And to make things worse, she’s got crabs. Demon crabs attack her and Nedley and they make it back to the Homestead, not unscathed. While Wynonna looks fruitlessly for a first aid kit, Nedley notices the VALDEZ scratched on the wall, and we get a little flashback showing us how it got there.

With Robin and Nicole still unconscious and some kind of agents closing in on the house, Jeremy is scratching VALDEZ into the wall with a knife because he couldn’t find a pen. The agents approach the door and Jeremy tries to hold them off by saying, “Gays only?” but they burst in and taser him.

When Nedley asks Wynonna what happened to her team, she confesses to drugging them, thinking she was keeping them safe, but now she’s worried it put them in more danger. Wynonna finds Bulshar’s/Julian’s ring on the ground and remembers Nicole wearing it and she realizes Waverly gave it to her. Nedley suggests maybe it was something even more serious than that. 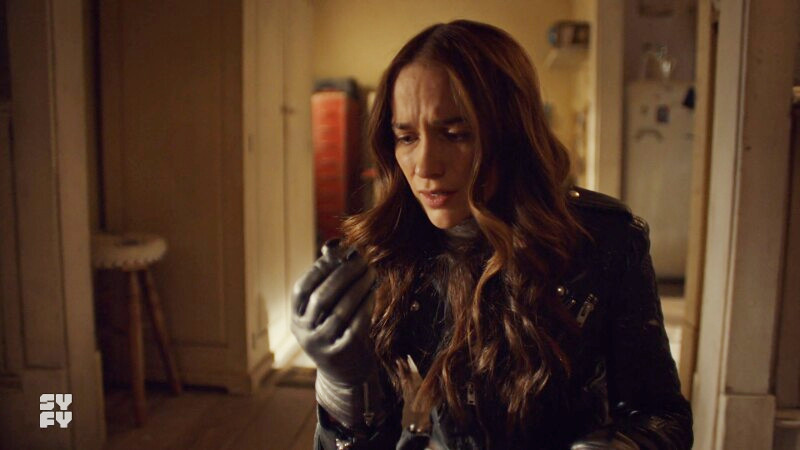 Wynonna makes a quiet plea for her favorite red hot chili pepper to be okay.

And then we find out that Nicole is…well, she’s not NOT okay, all things considered. She’s on a moving train to Bobo knows where, but hey she’s alive. Before even doing a sweep of the train car she wants OUT so she goes to open the door but it quickly pulled back.

Back at the Homestead, Wynonna finds these little explosives called “beaver blasters” (the most Canadian weapon ever) and flips them around and fumbles them like she did with Peacemaker oh so long ago. Her and Nedley are planning their next steps when they hear something in the kitchen. After a near miss with a thrown knife, they find Mercedes Gardner smiling back at them. She looks like she has made herself quite comfortable in the past few hours, and Wynonna can’t help but grab her by the fresh face to make sure it’s really her. 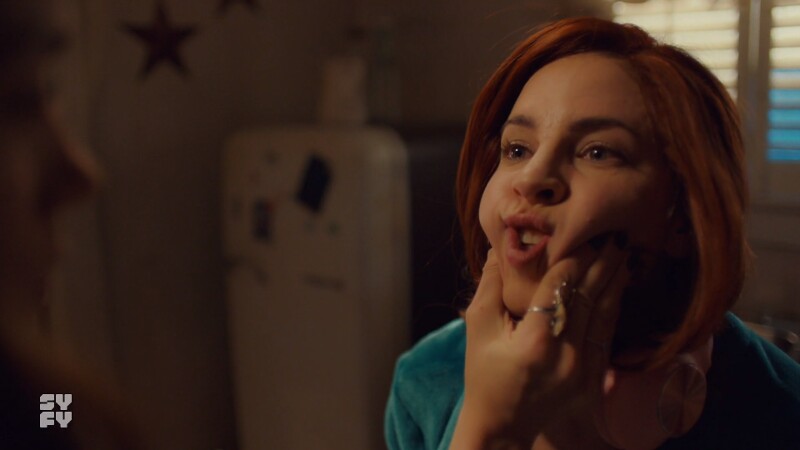 “Do you wanna build a snowman? Doesn’t have to be a snowman.”

Back on the train, we find out that it’s Kate who pulled Nicole back from the train car door, and it’s because the last guy who tried that got crispier than crispy bacon. Kate tells Nicole about how Mercedes bailed as soon as she saw danger creeping in, and Nicole asks if Kate can help her by giving her a reading and telling her what to do next, how to find Waverly. Kate asks if she has anything of Waverly’s and when she realizes she doesn’t have the ring anymore, she says she does have something of Waverly’s: Her. 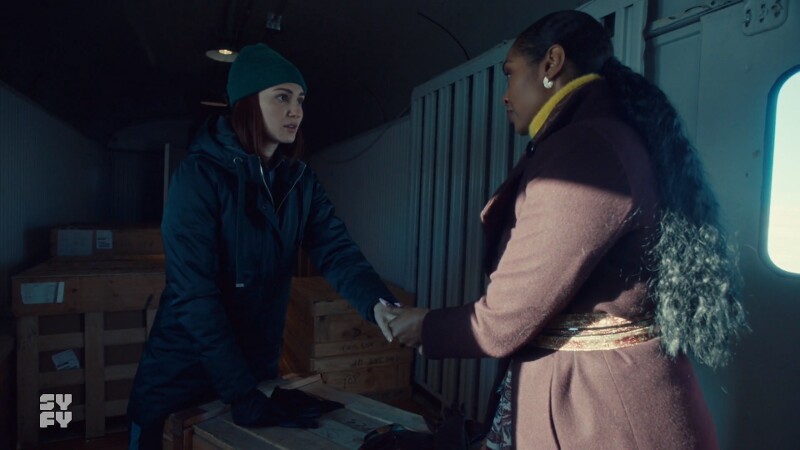 Meanwhile Wynonna is literally Googling “Valdez” and only finding images of tankers that caused oil spills (which could be a clue TRULY WHO KNOWS) and Mercedes is giving her own version of the story Kate told, claiming Kate told her to save her own beautiful skin and leave her behind. Also, Wynonna jokes that they “totally boinked” and Mercedes doesn’t deny it so it’s canon no take backs. Mercedes thought she’d be safe at the Homestead with the heir, but Wynonna tells her that the curse was broken. She’s not the heir of anything anymore.

Mercedes makes a joke about Wynonna’s “hot mess files” and that sparks Nedley to tell Wynonna that he actually does have Dolls’ BBD files back at his office. He pulls out the box from inside the couch (claiming nobody ever uses it, another wink) and Wynonna goes through the files, information about Dolls’ fellow agents, mostly those who have died. 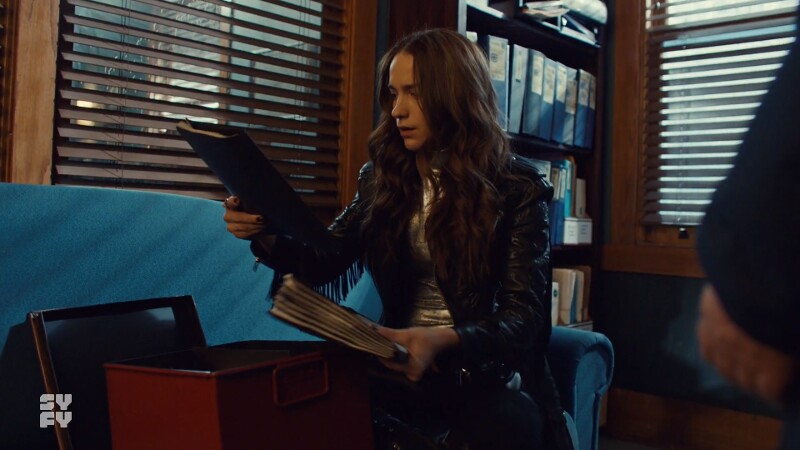 Waverly is usually the one who does all the research. :( :(

On the train, Kate draws the first two cards for Nicole. The Empress, representing feminine power, and Death, which makes Nicole freak the freak out. 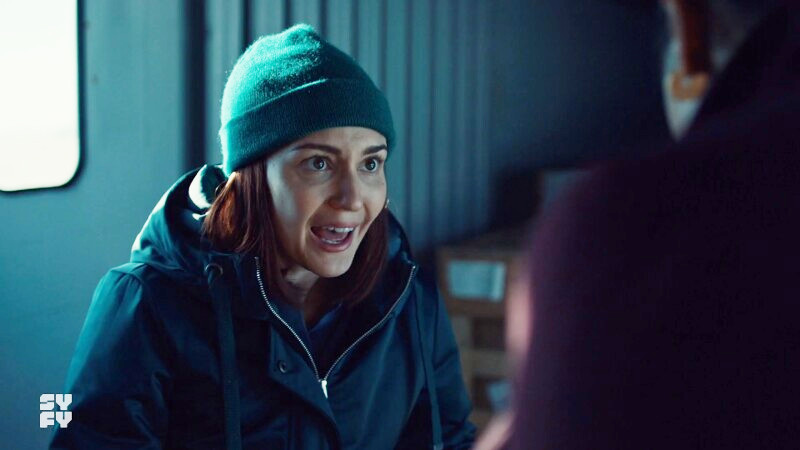 Also me whenever I get my tarot read.

But Kate reassures her that it doesn’t necessarily mean literal death. It represents transition, a doorway. Nicole tries to convince Kate to come with her to save Waverly saying she can save Doc too, but Kate is realizing that her relationship with Doc was toxic and that she has to be on her own for a while. The last card is The Fool, which represents a journey, and Kate knows she needs to help Nicole on hers. So she uses her vampiric fortitude and opens the door for her Haught pal. 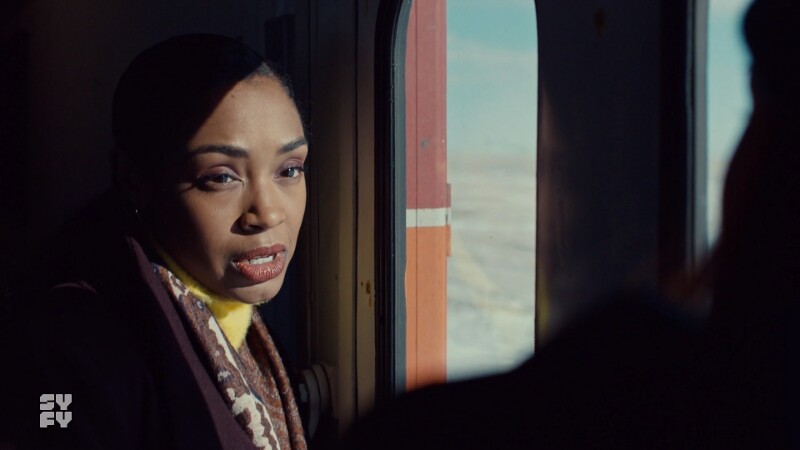 She gets zapped and Nicole jumps, but Kate is strong and as soon as two men come in to check on the prisoners, Kate’s eyes glow and her teeth gold up and you know she’s going to be just fine. 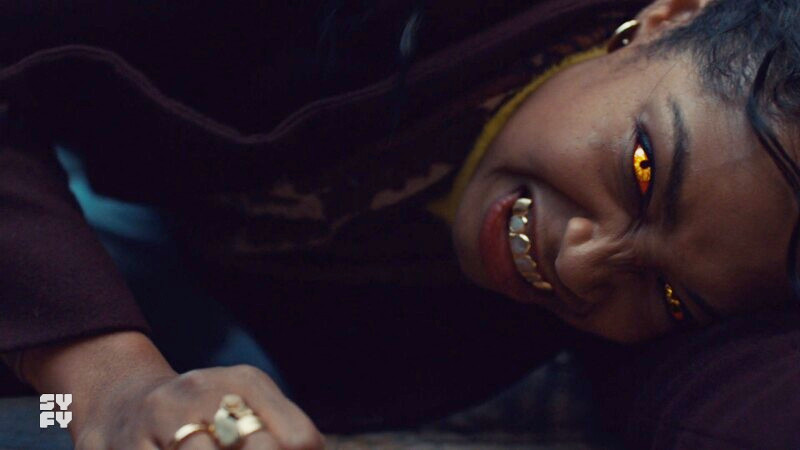 Hope we haven’t seen the last of this badass.

Wynonna learns from the files that Gloria Valdez was a scientist who may have information on the Garden, and they find a photo of a city Mercedes recognizes as Monument, so that’s where Wynonna will go next. The thing is, Nedley is too injured to join her and Mercedes is too…Mercedes. 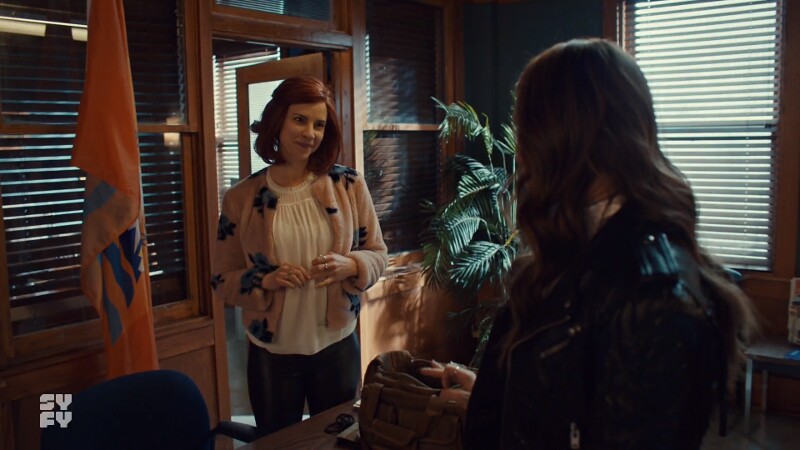 Also for the record, she’s wearing Waverly’s jacket from 309, and honestly that shirt looks familiar, too.

So she has to go it alone. Nedley sends her off with a bunch of beaver blasters and a, “Nobody fucks with our family.”

We cut to the Garden, where a door opens and Doc enters in all his cowboy glory. The door locks closed behind him so he sets off to find the littlest Earp girl.

Waverly, still chained to a rock, hears him enter and starts calling for him, her chains tightening. 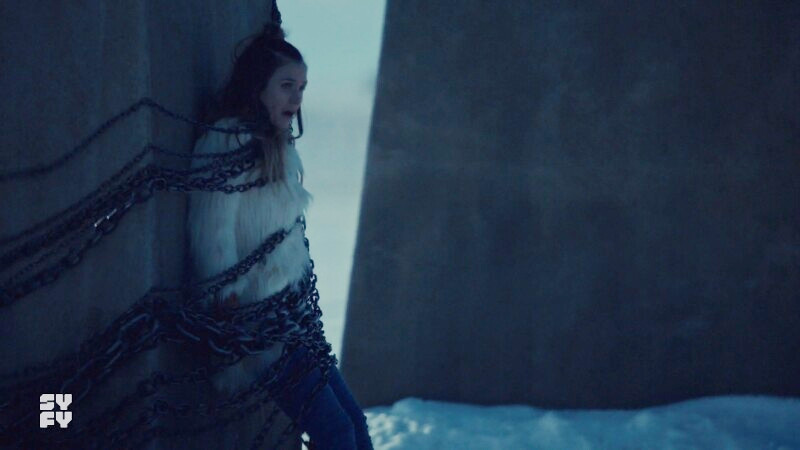 Doc starts pulling at the chains and even though they go down into a well, he pushes through his fear to save our angel. He pulls out a mass of flesh and branches that my friend Monica wisely pointed out could be what’s left of Jolene, which would explain why Waverly looked so defeated when she was being pulled into the Garden, saying she couldn’t fight anymore. And it DOES look like a very, very big version of the gross seeds Bulshar was shoving down people’s throats, and Bulshar is the one who turned Jolene into a tree. But anyway Doc saves Waverly and holds her and she’s not alone anymore.

Exactly 169 miles from Monument, Wynonna’s trusty truck quits on her and she slumps against it, feeling like she can’t do this alone. She tries to imagine what Doc and Waverly would say to her, with adorable impressions of two of her favorite people. 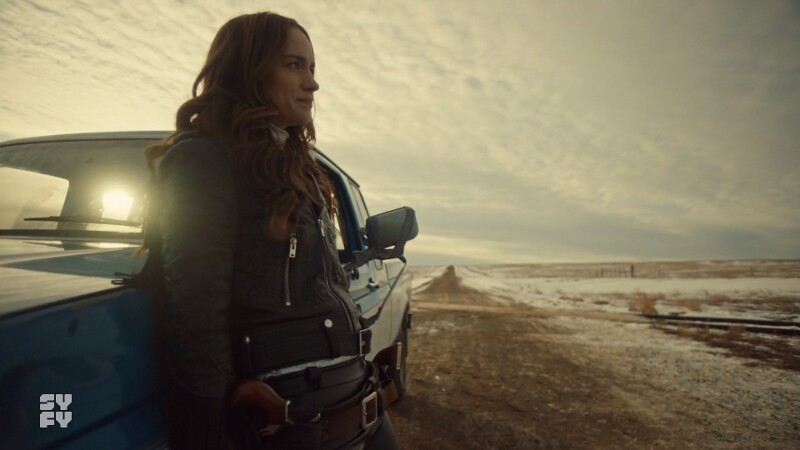 LOOK AT THIS SHOT. :squeezes your face and points it at the screen: LOOK AT IT! SO PERFECT.

She thinks of Haught next and is surprised to hear how accurate her impression is before realizing it’s the real Nicole. Wynonna flings her arms open, wanting a hug from her sister’s maybe fiancée. 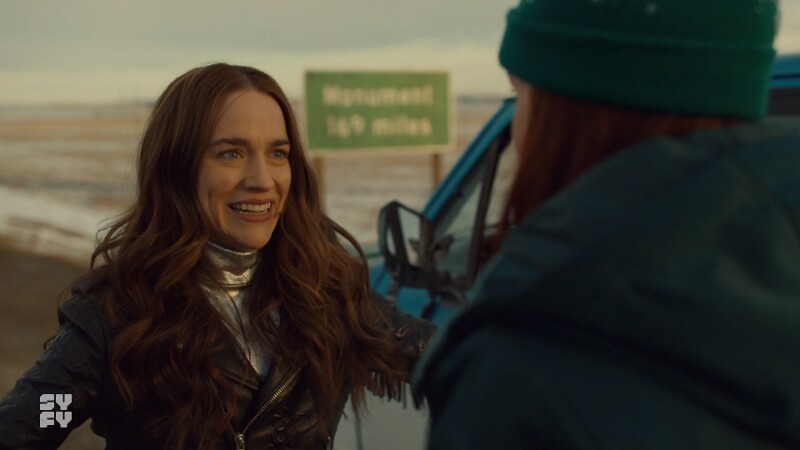 But she gets a fist to the face instead. Nicole is SO mad at her for counting her out before she could prove herself in the boss battle and Wynonna tries to brush it off as ancient history but it was literally yesterday. Wynonna says that you had to be special to get into the garden, and that Nicole isn’t a bisexual angel or an undead gunslinger.