What do y’all think is the number one super top indisputably best peppermint bark? I know it’s sacrilegious to not say Ghirardelli but I actually think it’s Dove with the dark chocolate! Please let me know your answer in the comments so I can seek out your choice of tasty treats and taste them myself!

+ This is just about the wildest news I can think of to end this year with: The Knights of Steel version of Supergirl and Wonder Woman are A COUPLE who SMOOCH ON THE MOUTH in the comic! This Supergirl is not Kara Danvers, but Jor-El’s daughter and Kal-El’s sister, Princess Zala. The GamesRadar writer who broke the news thinks its an homage to Kara and Lena Luthor. Valerie Anne, whomst I just showed this to, thinks, “SO WE COULD HAVE HAD SUPERCORP?????” Fair question, PunkyStarshine! 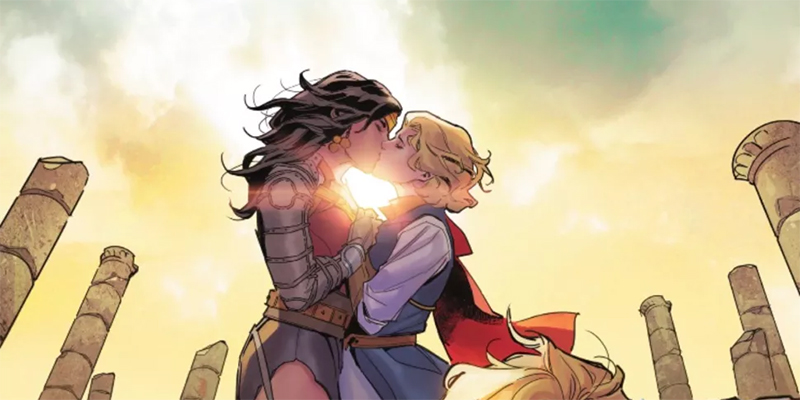 + Kiernan Shipka and Madelaine Petsch on the Riverdale / Sabrina crossover and that “Choni twist.”

+ Can Sort Of become Canada’s next breakout queer hit?

+ Sex, sin and sacrilege: Inside the making of the lesbian nun thriller Benedetta.

+ HBO Max has renewed The Sex Lives of College Girls for a second season.

+ At long last, onscreen portrayals of lesbian relationships are getting complex.

+ Tig Notaro stops back by The Tonight Show to finally ID the mystery celebrity on her flight.