In the upcoming election, marriage equality will be on the ballots in Maine, Maryland, Minnesota and Washington. Because of this, a lot of pro-gay marriage ads (and anti-gay marriage ads, I’m sure) are popping up during commercial breaks. If you think political ads are painful, I hear you — living in a swing state come election season makes me so happy I could stab my eyeballs out. Maybe you’ve seen one of the pro-gay marriage ads. Maybe you’ve noticed something… missing… from them.

Here’s a good one for marriage equality in Washington:
+

+
Isn’t that touching? “Marriage is the way that we recognize a life-long committment that two people make to each other” and “When I lay my head down for the very last time, I need to know that there’s someone that loves them and taking care of them and thinking about them and that’s what happens in a marriage.”

Okay, don’t get me wrong. I’m sure my mother would say the exact same thing if she were interviewed about marriage equality and I know I’d find it adorable and very PFLAG of her, but I’d still be asking why they didn’t just interview me about my relationships in the first place. Doesn’t that seem weird? This is an ad about Sarah Boehler, Robin and Steve Boehler’s daughter, so why is she only shown in photographs?

It isn’t just Sarah Boehler whose marriage is being talked about behind her back. It’s almost universal within the pro-gay marriage ads. Six out of the seven pro-marriage equality ads running right now feature heterosexual people talking about their “journey” to accepting the gays. The one that does feature a gay man doesn’t feature a gay man and his partner, but a gay man and his firefighting brotherhood. Touching though it may be, why are gay couples strangely absent from this discussion about gay couples?

On one hand, we can look at these ads as a positive step forward. At the heart of the marriage equality lies this uncomfortable reality: the majority (straight people) are voting on the rights of the minority (queers). Considering this, it isn’t a completely negative thing if we have to use heterosexuals to get our message heard. 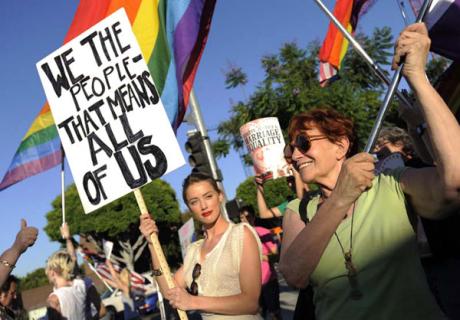 Matt McTighe, Mainers United for Marriage’s campaign manager, has been quoted as saying, “I’m a gay man, and the general rule of thumb for me is that an ad that meets my emotional needs is not necessarily the thing that’s going to change a typical voter’s mind about gay or lesbian people.”

Maybe he’s right. When I was speaking with Kristen earlier about this issue, she added, “Someone needs to tell Grandpa Gus his opinion is completely wrong. If he hates gay people enough, he’s going to tune out everything they say, so you kind of need straight people as an interpretor.” She went on to elaborate that challenging heterosexuals to accept marriage equality isn’t helpful if you only try to argue that the gays are all around them. Unfortunately she, says “I feel like we haven’t made enough progress to imagine we live in a world where homophobes listen to reason.” Amen.

These ads are using straight couples — or straight firefighters — to normalize or “interpret” the gay lifestyle for those that think the gay lifestyle isn’t normal. See? These people are still happy, married, and straight, even though they accept homosexuals as human beings. Let them hold your homophobic hand down the lane of compassion and understanding and all the way to the ballot box.

When questioned about whether future ads would feature gay couples themselves, Richard Carlton, manager of the Minnesota campaign for marriage equality, only said that future ads will “articulate why gay people want to get married… [Many straight people] are on a journey on this issue, and the most effective way to encourage them is to show them other people who have taken the same journey” in accepting marriage equality. 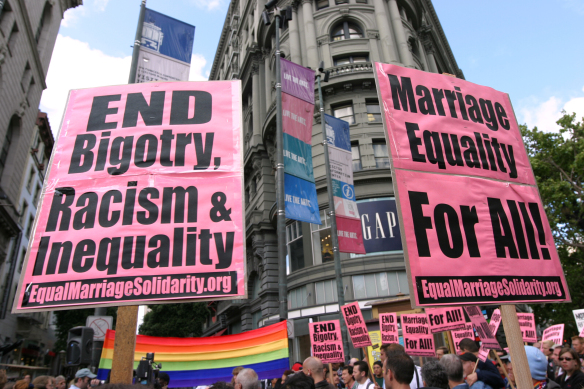 Americans, even Honey Boo Boo Child, are more supportive of marriage equality now than ever. According to a poll in May 2011 from the Pew Research Center, gay marriage and gay people in general are finding growing acceptance: “45% favor allowing gays and lesbians to marry legally while 46% are opposed. Two years ago, in April 2009, 35% supported same-sex marriage while 54% were opposed.” More recently, in a poll about how Democrats feel about marriage equality, the Pew Research Center found that 65% of Democrats support gay marriage, up 15% from just four years ago.

What has made people change their minds about gay people? In most cases, I’d say knowing a gay person is the best way to spread the message that we are human beings and not charity cases.

Bill Browning recently wrote in an article about the Boehlers:

Personally, I’m sick of seeing super happy straight couples with their arms around each other telling other straight people what marriage means. Fuck that. Let’s hear it from the people who actually want to get married and hear what it means to them.

It boils down to this for me: The whole point of coming out was to show people that the LGBT people they deal with on an everyday basis aren’t monsters or pedophiles or three-headed dragons. Instead, we’re just as good as they are and remarkably normal Americans like the majority of straight people. It’s been the most successful aspect of the modern LGBT rights movement. 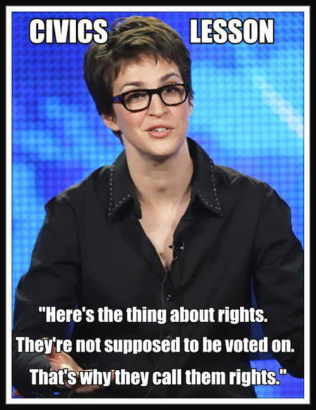 Maybe he’s right, too. The LGBT rights movement has been remarkably successful in changing people’s minds by just knowing us. For example, in college, one of my good friends drunkenly admitted to me that before she knew me, she had bought a “Marriage Is One Man and One Woman” bumper sticker for her car. She said that she had thrown it away that day because I had changed her mind. Mind you, I had always avoided political conversations with her because she openly wept when Obama was elected, but just realizing I was a human being with thoughts and feelings changed her mind. We shift in her mind from being a special interest group into people, human beings. I’m sure we all have these stories from friends or family members who have told us that by knowing us, they have come to support marriage equality.

By excluding loving gay couples from the conversation about themselves, aren’t we shoving us right back into that “special interest group” area that we’ve been fighting so hard to overcome? Perhaps we shouldn’t be viewing this as a positive “means to an end” situation. These ads aren’t doing much to help the LGBTQ community feel safer and protected, that’s for sure.

We need to remember that marriage equality is one small step in our plight of complete equality. It’s important, of course, and of particular interest to me since I’d like to one day get married and have children and access to equal rights, but it’s still one minor part of what our community needs to be protected as a whole. Call it patriarchal, call it antiquated, call it a non-issue — it matters to our community, and we deserve it. We also deserve respect in the process of gaining marriage equality, and that means including us in the damn political ads.

So why aren’t these ads tapping into this tried-and-true method of changing people’s opinions? Is seeing a gay couple on a political ad enough to actually change the opinions of most Americans? Maybe we really do need the straight couple ambassador method — it’s safe, but it also encourages normalization. In the end, these political ads aren’t for us. They may be about us, but they’re for the majority of Americans deciding whether or not a minority of Americans deserve rights. And that’s the most upsetting part, anyways.